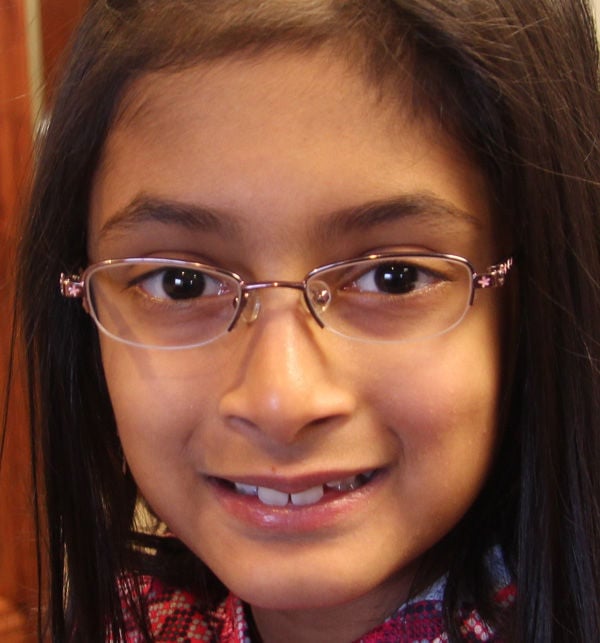 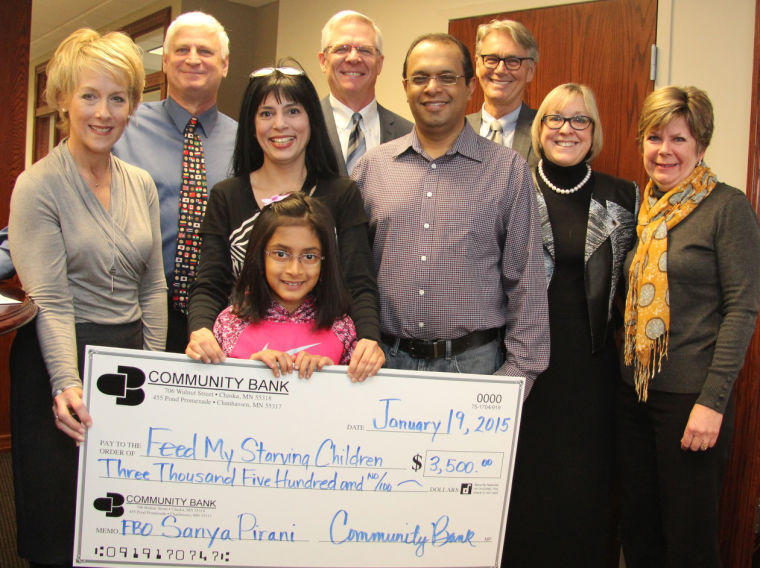 Sanya Pirani is only 8 years old but has already cemented her reputation as an effective fundraiser.

On Monday morning, Chanhassen’s Community Bank Corporation Board of Directors presented Sanya with a check for $3,500 for her Feed My Starving Children fundraiser. Also present were Lisa Moe, chairman of the board for FMSC, and FMSC CEO Mark Crea. (See photo online at www.chanvillager.com)

According to Jean Moore, executive assistant at Community Bank, every year each member of the board donates $500 on behalf of the bank to any charity of their choice. This year, several of the bank board members including Chair Bob Stevens, Ridgeview Medical Center CEO, made their donations to Sanya’s Feed My Starving Children fundraising team.

Sanya and her parents Dilshad and Amyn Pirani are Prior Lake residents. Dilshad is the nursing supervisor at Ridgeview Medical Center, Waconia.

Her inspiring story — to raise enough to feed an entire village — was passed on to the rest of the board members, prompting some of them to also donate to FMSC.

My name is Sanya Pirani. I am 8 years old. I am third-grader at Jeffers Pond Elementary school in Prior Lake.

Sanya has a FMSC website, which states her charity vision and goal for 2014-2015:

“I believe helping a child means helping future of our community. Hungry mind can’t think so I like to go big and help and feed a village of 100 people for one year, through “Feed my starving children” foundation. My goal is to raise $8,030 by the end of Dec 2015.”

With Community Bank’s board’s contribution, Sanya and her team are nearly there. According to the team’s website, it is at $6,968. Other members of her team are Jaeda Blume, Hayley Mullins, Matthew Mullins, and Andrea Reichwald. (For more information and current total, go to http://tinyurl.com/oq5v6km.)

We spoke to Sanya’s mother Dilshad to learn more about her precocious and charitable daughter.

1Sanya is only 8-year old. How did she develop such a humanitarian awareness at her young age?

A: Every since she was a youngster, she would say at Christmas and her birthday, ‘Please do not give me anything.’ And then she watched a news story on “60 Minutes” showing how many children have been displaced because of war. She had tears in eyes. “Mother, we’re eating here, and these people don’t even have basic necessities,” Sanya said to me. She went upstairs to her study room, and wrote a letter to Santa Claus asking him to ignore her earlier request, and instead give her gifts to other children. And that she wanted to feed an entire village with her FMSC fundraiser.

2She did meet with Santa at a Christmas event. How did that go?

A: We went to Holidazzle in Prior Lake. Santa asked her what she wanted for Christmas. She told him he’d be getting her letter, but he asked what it said, and learned about her wish. He said her that her wish would come true, but warned that this timeline for this year was very short.

3In addition to her fundraising, does Sanya have other interests?

A: Sanya is a singer, songwriter, composer of her own song (piano notes) and story writer. She has been in the local newspaper since 7 years of age. She plays piano, goes to swimming, skating, in addition she goes to soccer and gymnastic in summer, and is a very good student per her teacher, and on Feb. 17 Congressman John Kline will give her the Star of the North award.