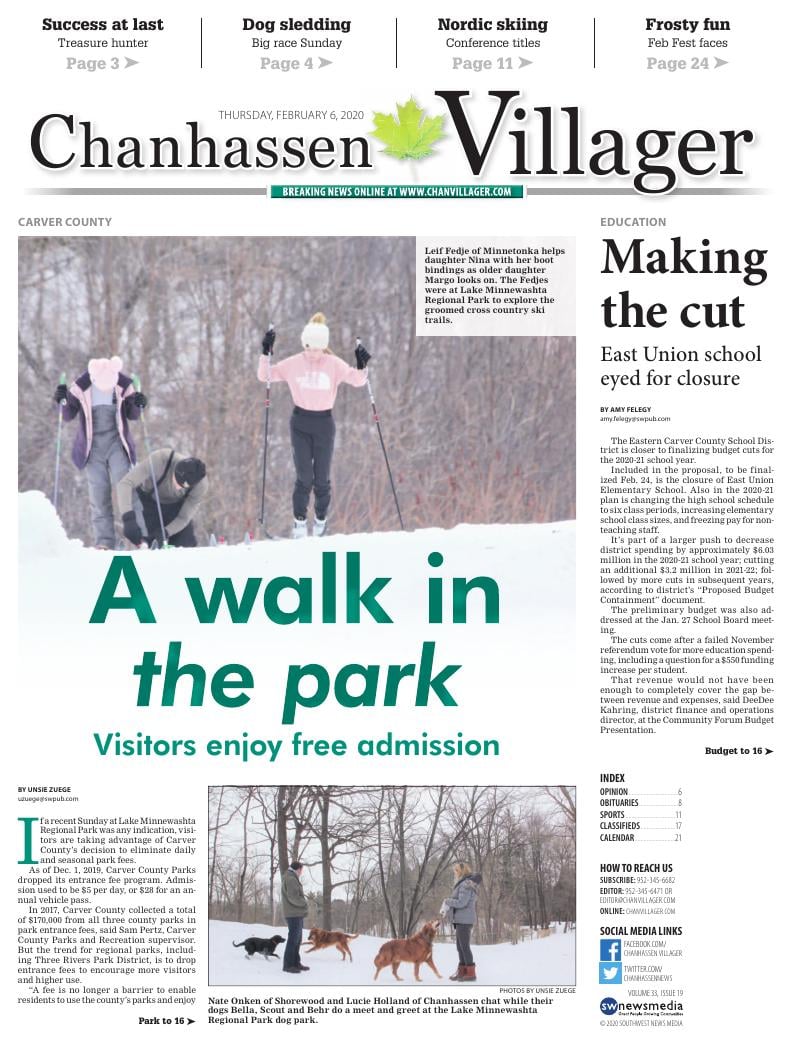 If a recent Sunday at Lake Minnewashta Regional Park was any indication, visitors are taking advantage of Carver County’s decision to eliminate daily and seasonal park fees.

As of Dec. 1, 2019, Carver County Parks dropped its entrance fee program. Admission used to be $5 per day, or $28 for an annual vehicle pass.

In 2017, Carver County collected a total of $170,000 from all three county parks in park entrance fees, said Sam Pertz, Carver County Parks and Recreation supervisor. But the trend for regional parks, including Three Rivers Park District, is to drop entrance fees to encourage more visitors and higher use.

“A fee is no longer a barrier to enable residents to use the county’s parks and enjoy all the amenities,” Pertz said.

During the winter, visitors can use the groomed trails for cross country skiing or snowshoeing. Equipment can be rented on weekends from 11 a.m. to 5 p.m.

In summer, there’s Lake Minnewashta Beach, playgrounds, picnic grounds, a shelter and archery. In all seasons of the year, park visitors can enjoy the trails and bring their dogs to the dog park.

Sunday, Jan. 26, was the third time in a week that Nancy Madsen, of Chanhassen, came to Lake Minnewashta Regional Park to cross country ski. “They keep the trails so well-groomed,” she said, “especially since now the walkers have a separate path. I love it,” Madsen said, then pushed off down the trail through the trees.

The day was also the first time Nina Fedje of Minnetonka tried cross country skiing. While her father Leif Fedje helped attach her boots to the bindings, her older sister Margo glided up and down a gently sloped hill nearby.

“Nina wanted to try skiing, so we thought today was a good time,” Fedje said, once Nina’s skis were secured. “It’s not too cold. And since they changed the fee policy, coming here is a no brainer for us. And they keep the trails groomed, which I thought would be good for Nina’s first time out.”

Margo glided up and said she liked the park trails. Margo’s comfortable on her skis, being on a cross country ski team at Minnetonka Middle School West. The trio took off down the trail, Margo ahead, with Leif coaching Nina, who was still getting a feel for the skis and the snow.

Elsewhere in the park, two cyclists on fat-tire bikes rode past on the road, and disappeared around a curve farther up the road, their thick wheels kicking up icy snow from the road.

Lake Minnewashta’s large and small dog parks were busy, too, with a half dozen vehicles in the parking lot. Once inside the gate, it didn’t take long to come across frolicking dogs and their owners.

Lucie Holland, who recently moved to Chanhassen from Wales, United Kingdom, said that since discovering the park, she and her black Lab Bella are there often. Nate Onken of Shorewood came down the path with his two golden retrievers, Scout and Behr. The three dogs met and took off, chasing each other through the snow.

David Scouler of Excelsior likes the new fee free policy as he brings his dog Bauer and Bodie to the dog park almost every day. And Clay Arvidson, of Victoria, usually takes his dog Milo to the Carver Park Reserve dog park, but likes to drop in at Lake Minnewashta for variety, and it’s even better now that it’s free.

“When you charge a fee, people tend to shy away, especially if they’re first-time users. If you want more people to use your parks, drop the fees. This way, it’s much easier for people to drop by, see what the park is like.”

Cost: No park entrance fee; event fee is $5 per person; $10 per person for dog sled ride

East Union Elementary School, the smallest in the district, is proposed to close in the coming years amid budget cuts.

The Eastern Carver County School District is closer to finalizing budget cuts for the 2020-21 school year.

Included in the proposal, to be finalized Feb. 24, is the closure of East Union Elementary School. Also in the 2020-21 plan is changing the high school schedule to six class periods, increasing elementary school class sizes, and freezing pay for non-teaching staff.

It’s part of a larger push to decrease district spending by approximately $6.03 million in the 2020-21 school year; cutting an additional $3.2 million in 2021-22; followed by more cuts in subsequent years, according to district’s “Proposed Budget Containment” document.

The preliminary budget was also addressed at the Jan. 27 School Board meeting.

The cuts come after a failed November referendum vote for more education spending, including a question for a $550 funding increase per student.

That revenue would not have been enough to completely cover the gap between revenue and expenses, said DeeDee Kahring, district finance and operations director, at the Community Forum Budget Presentation.

Historically, the School Board has used unassigned fund balance money to ward off direct cuts to the classroom but this year, officials say that’s not an option.

“Unfortunately with the failure of the referendum, we are now in a position where impacts to students and the classroom are unavoidable,” said Superintendent Clint Christopher.

The sentiment was shared by other school officials.

“It’s not something any of us care to do, but we need to move forward,” said Kahring.

Though cuts can change as the board reviews numbers this month, proposals already include specifics. In total, the district’s budget for the 2020-21 school year is $172 million.

Kahring said expenditures have steadily increased since 2010, due to district growth and inflation. The problem? The dollar amount in the fund balance has generally remained flat, she said.

Kahring said if no budget cuts happened, the fund balance would soon be in the negative.

Next year, moving high schools to a six-period schedule would save the district around $1.6 million. Increasing elementary class sizes would spare $1.1 million, and freezing pay for non-teachers would save about $690,000.

The following school year, 2021-22, the district is again proposing a soft freeze in pay — this time, with teaching staff. Also on the table is an increase in athletic fees, cutting a foreign language program and staff, and using inhouse transportation. East Union is proposed to close that year to save around half a million dollars.

As far as expenses, most money is used on salaries and benefits for teachers and staff, totaling $76 million, or just under 80% of the total budget. Other big costs are transportation, snow removal, and classroom supply costs, according to the district.

The smallest elementary school in the district, East Union, holds just over 100 students today. Officials said there are inherent costs in operating a small school.

Kahring said it costs around $4,000 per student in operating funds — double the cost at Chanhassen Elementary. The Clover Ridge and Carver elementary schools are even lower, at $1,600 per student.

It’s also an older building, contributing to a higher operating cost, she said. But the proposed closure doesn’t come without grief.

Parents said they were first notified of the proposed change the last week of January.

General budget cut planning progress was communicated with families in December, said Jolaina Falkenstein, who has three children enrolled at East Union. But she doesn’t feel like enough emphasis was put on the possibility of the school closing.

“The first email they sent also seemed rather vague, considering the full ramifications that were not communicated more clearly until recently,” she said.

Jay Woller, principal at East Union, sent an email to parents on Jan. 28 alerting families to the possible closure.

“This is obviously a difficult subject for all of us, and the decision to include closing East Union was not an easy one,” Woller said. “No matter what decision the board makes, nothing will happen this school year or next school year.”

Falkenstein said the current classroom size at East Union is perfect for her children — sitting at around 20. Class sizes in the elementary schools are proposed to increase by 1.5 students in the coming school year.

If the school closed, all East Union students and teachers would be transferred to other schools, also increasing class size.

Falkenstein said she isn’t convinced closing the school is the best option.

“It sounds like there’s some other ways that the budget can be cut without losing a whole school,” she said.

Moving forward, the board will review the cut proposals and take a vote at a Feb. 24 meeting.

“The board has a difficult decision ahead of it,” Superintendent Christopher said. “(It) will continue to review the proposal, consider feedback, and evaluate options before it votes on a final plan.”

The school district also has a budget containment website with more details at www.district112.org. 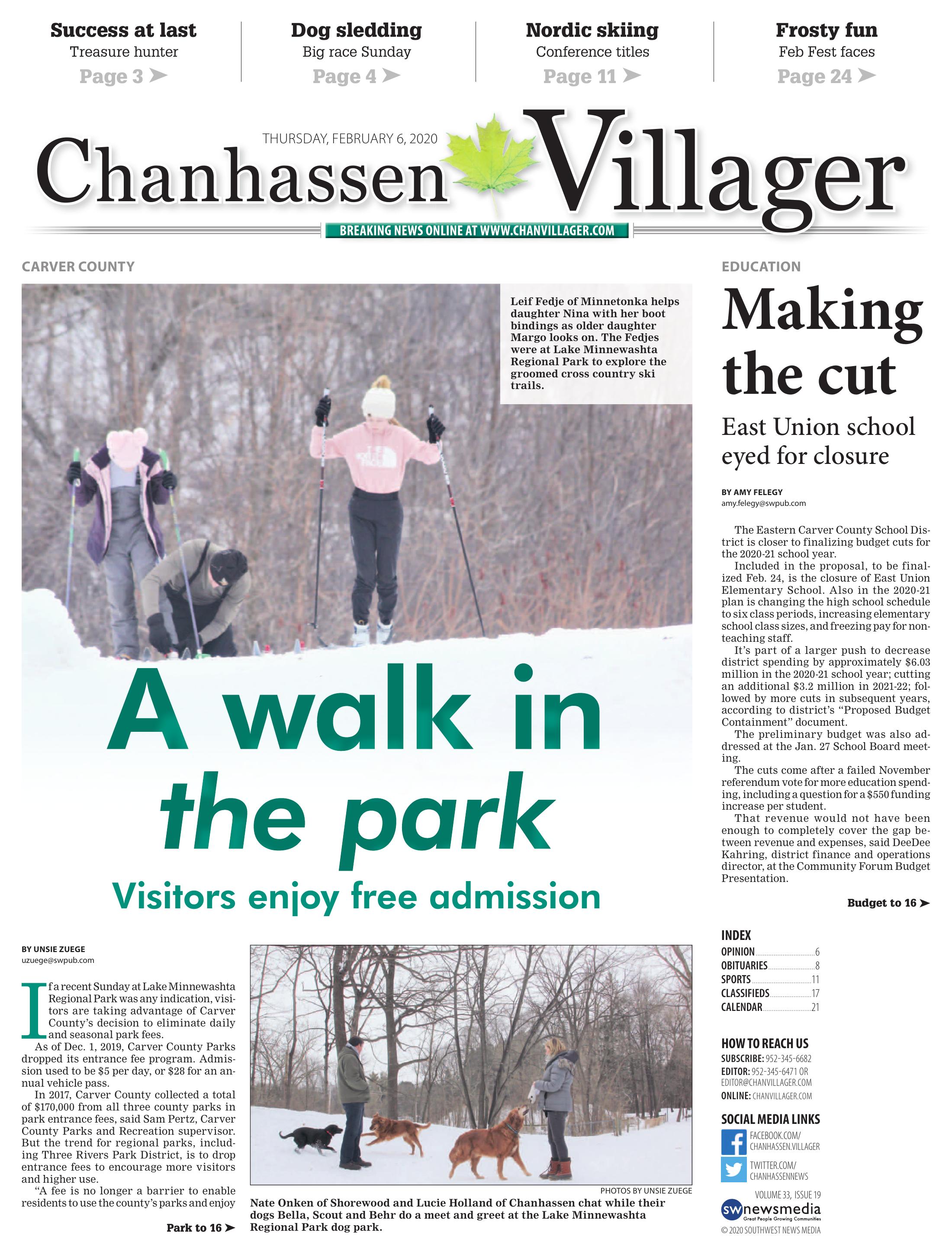