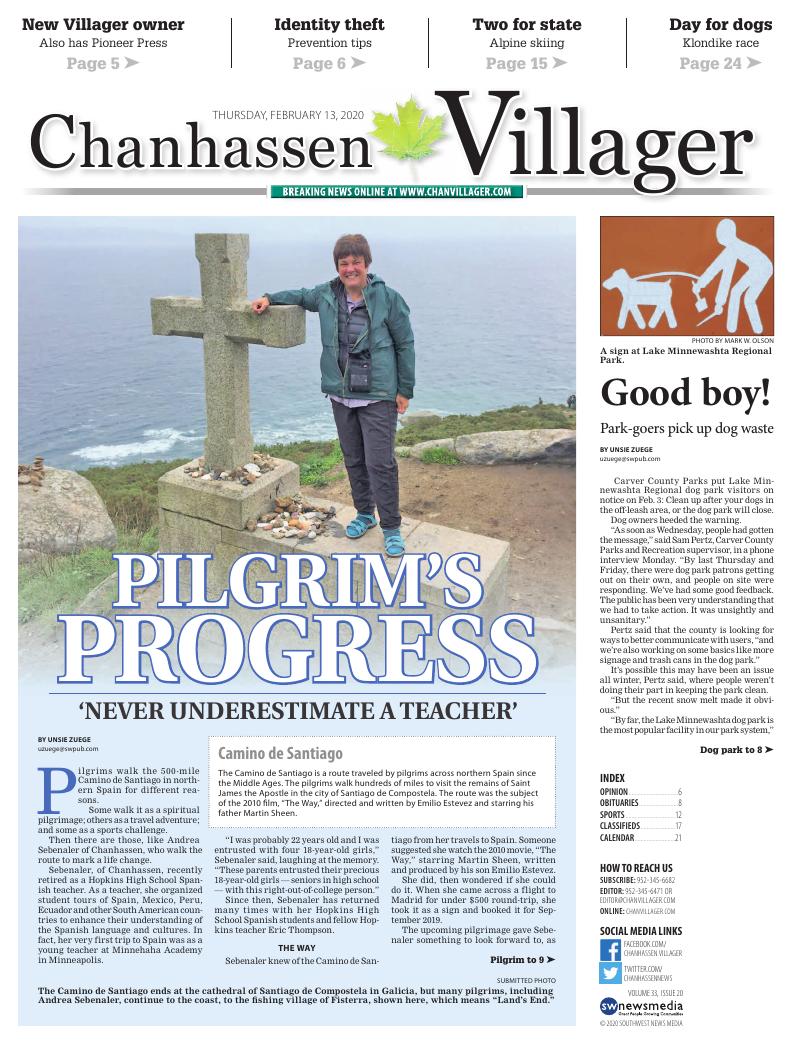 The Camino de Santiago ends at the cathedral of Santiago de Compostela in Galicia, but many pilgrims, including Andrea Sebenaler, continue to the coast, to the fishing village of Fisterra, shown here, which means "Land's End."

The scallop shell is the symbol of the Camino de Santiago, and is carried by all the pilgrims.

Andrea Sebenaler, third from right, at journey's end in front of the cathedral Santiago de Compostela.

Sebenaler used “A Pilgrim’s Guide to the Camino de Santiago,” by John Brierley. The book’s map illustrates the different routes an individual can choose to walk.

Some walk it as a spiritual pilgrimage; others as a travel adventure; and some as a sports challenge.

Then there are those, like Andrea Sebenaler of Chanhassen, who walk the route to mark a life change.

Sebenaler, of Chanhassen, recently retired as a Hopkins High School Spanish teacher. As a teacher, she organized student tours of Spain, Mexico, Peru, Ecuador and other South American countries to enhance their understanding of the Spanish language and cultures. In fact, her very first trip to Spain was as a young teacher at Minnehaha Academy in Minneapolis.

Since then, Sebenaler has returned many times with her Hopkins High School Spanish students and fellow Hopkins teacher Eric Thompson.

Sebenaler knew of the Camino de Santiago from her travels to Spain. Someone suggested she watch the 2010 movie, “The Way,” starring Martin Sheen, written and produced by his son Emilio Estevez.

She did, then wondered if she could do it. When she came across a flight to Madrid for under $500 round-trip, she took it as a sign and booked it for September 2019.

The upcoming pilgrimage gave Sebenaler something to look forward to, as she approached her 33rd, and final, year of teaching.

“Teaching brought me intense joy but at the same time, I was tired of being tired. I was a regular at the Caribou at Byerly’s Sunday mornings, grading papers. I just knew I wanted to go out of teaching while I still loved it.”

Sebenaler bought herself a bracelet designed by a pilgrim from Colorado. The metal band is decorated with a scallop shell, the symbol of the Camino de Santiago. “If I was having an especially tough day at school, I would look at my bracelet and it would make me smile.”

She spent lunchtime looking at photos of the Camino or reading about it.

After the school year ended, she began training for the 500-mile walk to build stamina.

“I knew it was going to be mountainous, so I hiked on the ski slopes at Hyland Park and I learned that I love to use trekking poles. And I wore my backpack. Everything I read about the Camino, they’re right. You have to keep your pack light.” Sebenaler's pack weighed about 14 pounds.

“You’re not carrying tents or cooking equipment,” Sebenaler said, explaining that there are many villages and towns all along the many routes to the Santiago de Compostela cathedral in Galicia. There are many places to stay, ranging from bare-bones hostels to luxury hotels and everything in between.

Sebenaler used the book, “A Pilgrim's Guide to the Camino de Santiago,” by John Brierley, which describes the different routes an individual can choose to walk. Sebenaler chose the most familiar one called the Camino Francais, a length of 500 miles.

She flew to Madrid, took a train to Pamplona, then bused to the Pyrenees into the city of St. Jean Pied de Port. She started walking on Sept. 20, 2019.

“A lot of people do it 33 days,” Sebenaler said. “For me, it took longer and I found walking 12-15 miles a day was my sweet spot. I was tired, but not exhausted. I would walk hard for five days, then take a day of rest. I would go to museums I thought were interesting along the way; I would eat well; if I was in a city, I would find a place to wash my clothes."

The first third of the Camino is physical, Sebenaler said. It was 12 miles a day on various terrains, such as pavement, rocks or crushed rocks. "It brought your life down to thinking about the barest things you need in life," she said.

In the beginning, hoping to be as frugal as possible, she stayed in albergues, simple lodgings, similar to a hostel. They could be in municipal buildings, old churches, an old house, or simply a room with bunk beds. She had a silk sleep sack (bed bug prevention) and a Costco blanket.

But she soon realized, it was too much togetherness. "Too much snoring, people getting up in the middle of the night," Sebenaler said. "I love talking to people during the day, but..." She chose to book inexpensive hotels for the remainder of the pilgrimage.

Although she prepared for the long walk with recommended trail runner shoes, she did lose some toenails along the way. She found the folks with hiking boots suffered blisters. And she realized being fit was no guarantee for success.

"A marathon runner from Canada was walking as slow as me because she had bad blisters. Runners don’t do well; they’re used to running hard for two hours and then done. This is seven hours of days of walking. I met a group of Canadian women, these long-legged fit women who were part of an adventure club that quit. They had enough and went off to be tourists."

"We would stop and have a beer and olives," Sebenaler said. "I call this the original Gatorade. On Facebook, some folks wrote, 'You need to have your electrolytes ... and others would say, 'You just need salt and to drink enough water.' So beer and olives took care of that."

She met people from around the world, including Germans, Italians, South Koreans, Canadians, and other Americans. Everyone walks for their own reasons, Sebenaler discovered — people who were very ill, people walking in memory of loved ones or important people in their lives, or meeting a personal challenge.

Sebenaler kept meeting up along the route with one particular pilgrim, a young man named Tim Effrem from Florida. She called him her Camino angel. It turns out he had a Minnesota connection. He attended Orono High School until age 15. Despite the age difference, they hit it off and bonded.

"This young man was so kind to me and made me laugh so hard, not unlike my students through the years. Every time I'd see him, I'd say, 'Tim, I doubt we'll see each other again.' But we did every so often. Out of nowhere, I'd hear his voice at a church or cafe or walking ahead of me."

She walked into Santiago de Compostela on Oct. 30. Those completing their pilgrimage receive an official document acknowledging their walk. She saw one of her new friends from earlier in the pilgrimage, Kim from Montana.

"He'd got way ahead of me, but he would message me, 'Where are you, how are you doing?'"

"When I finished, I messaged, ‘Kim, I made it.’ He'd been long done. He replied, 'Andrea, I have to tell you something. When I first met you, in my head I gave you a one in 10 chance of making it.'"

"I said, 'Never underestimate a teacher!' I truly believe that teaching is mentally tougher. The easiest day teaching is still harder than the hardest day walking. Physical is physical. You just walk through rain, you’re cold, you do it."

Tim, her Camino angel who had finished days ahead of her, walked extra days to the coast. On the evening he returned to Santiago, they met and hung out until his train left at 5 a.m.

He’s back in Florida with his family. Sebenaler and Tim continue to stay in touch.

"I am grateful that this young man came into my life and gave me the encouragement I needed to finish the Camino,” Sebenaler said. “He never doubted me for one second. My thoughts are with him as he embarks on his next Caminos in life."

The Camino de Santiago is a route traveled by pilgrims across northern Spain since the Middle Ages. The pilgrims walk hundreds of miles to visit the remains of Saint James the Apostle in the city of Santiago de Compostela. The route was the subject of the 2010 film, “The Way,” directed and written by Emilio Estevez and starring his father Martin Sheen. 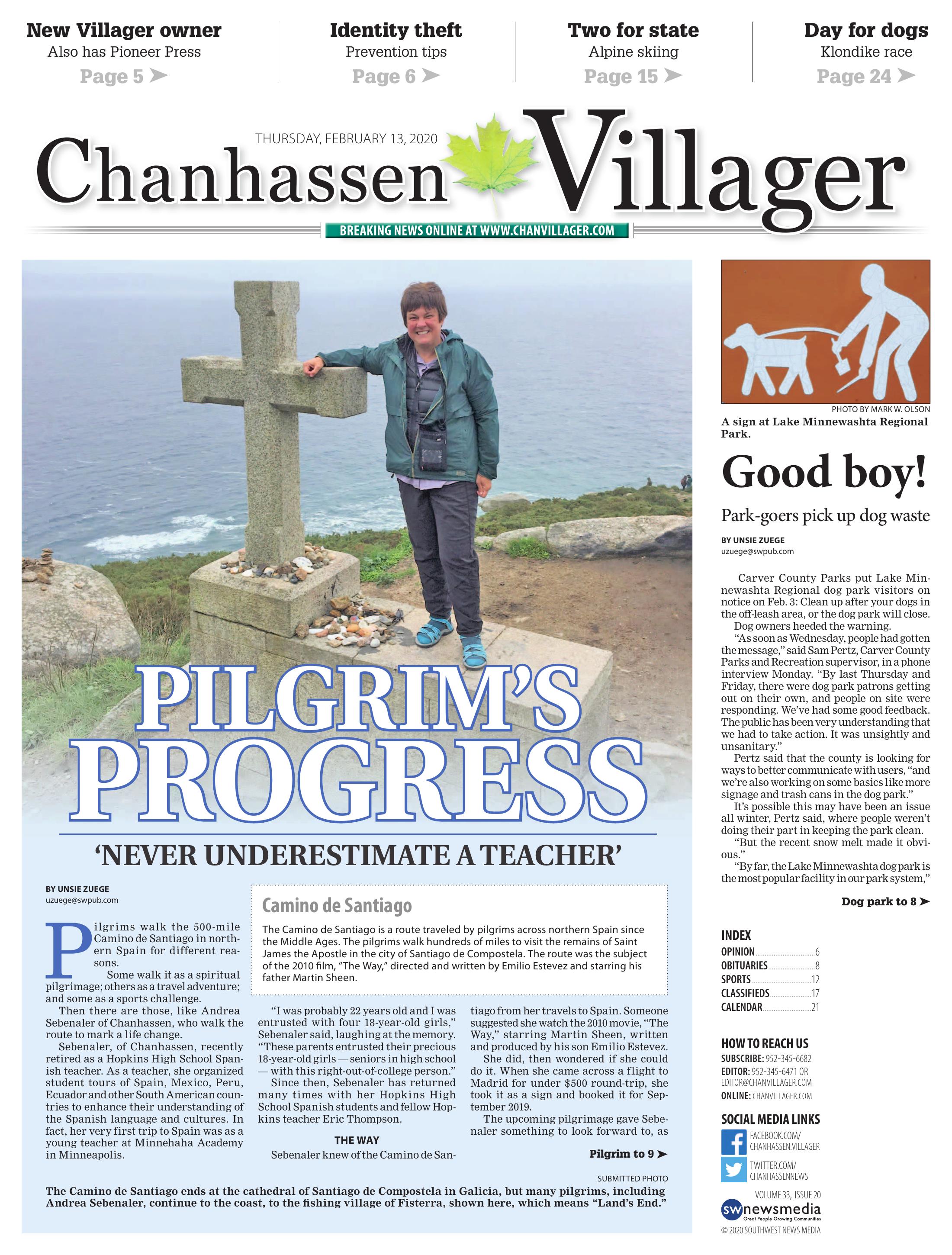