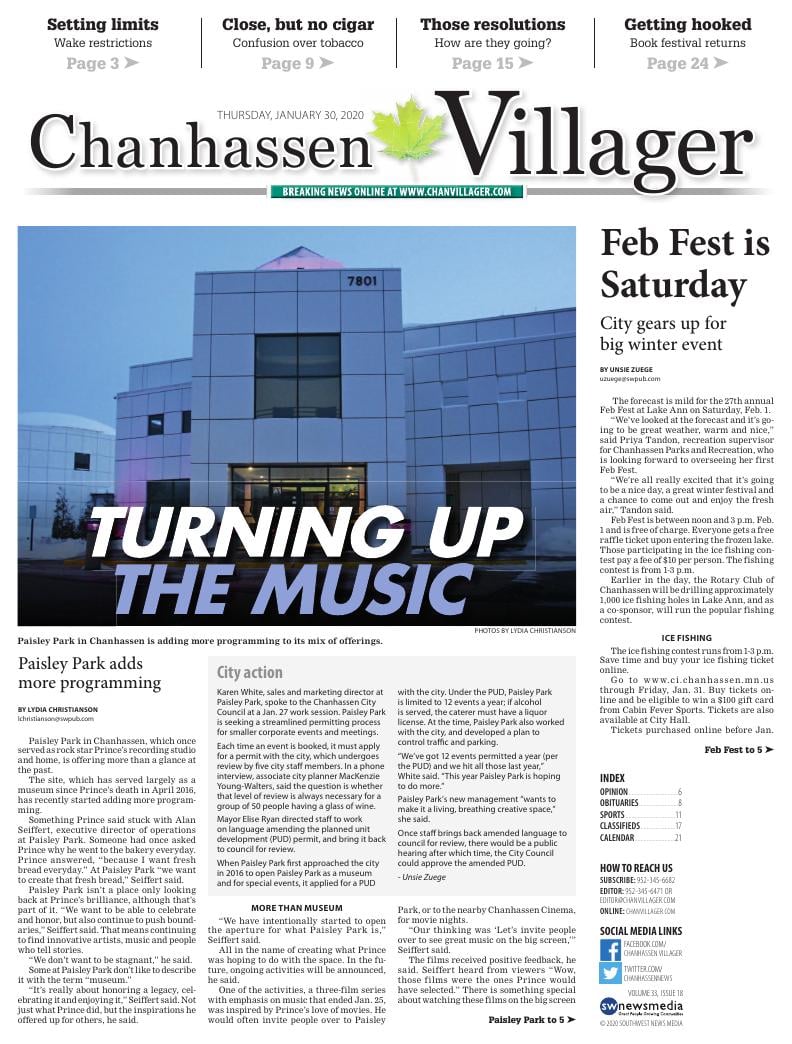 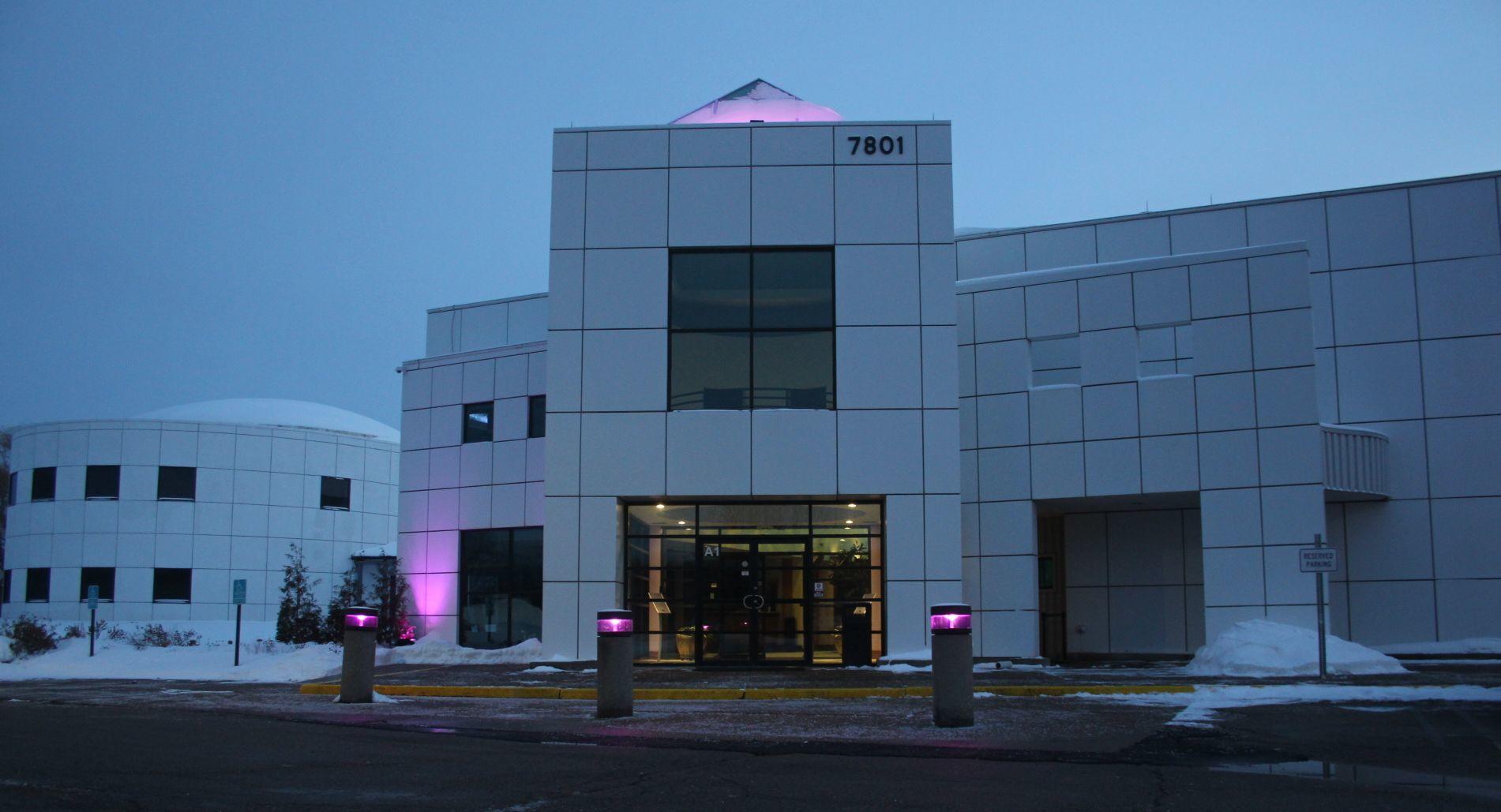 Paisley Park in Chanhassen, which once served as rock star Prince's recording studio and home, is offering more than a glance at the past.

The site, which has served largely as a museum since Prince's death in April 2016, has recently started adding more programming.

Something Prince said stuck with Alan Seiffert, executive director of operations at Paisley Park. Someone had once asked Prince why he went to the bakery everyday. Prince answered, “because I want fresh bread everyday.” At Paisley Park “we want to create that fresh bread,” Seiffert said.

Paisley Park isn’t a place only looking back at Prince’s brilliance, although that’s part of it. “We want to be able to celebrate and honor, but also continue to push boundaries,” Seiffert said. That means continuing to find innovative artists, music and people who tell stories.

“We don’t want to be stagnant,” he said.

Some at Paisley Park don’t like to describe it with the term "museum."

“It’s really about honoring a legacy, celebrating it and enjoying it,” Seiffert said. Not just what Prince did, but the inspirations he offered up for others, he said.

“We have intentionally started to open the aperture for what Paisley Park is,” Seiffert said.

All in the name of creating what Prince was hoping to do with the space. In the future, ongoing activities will be announced, he said. 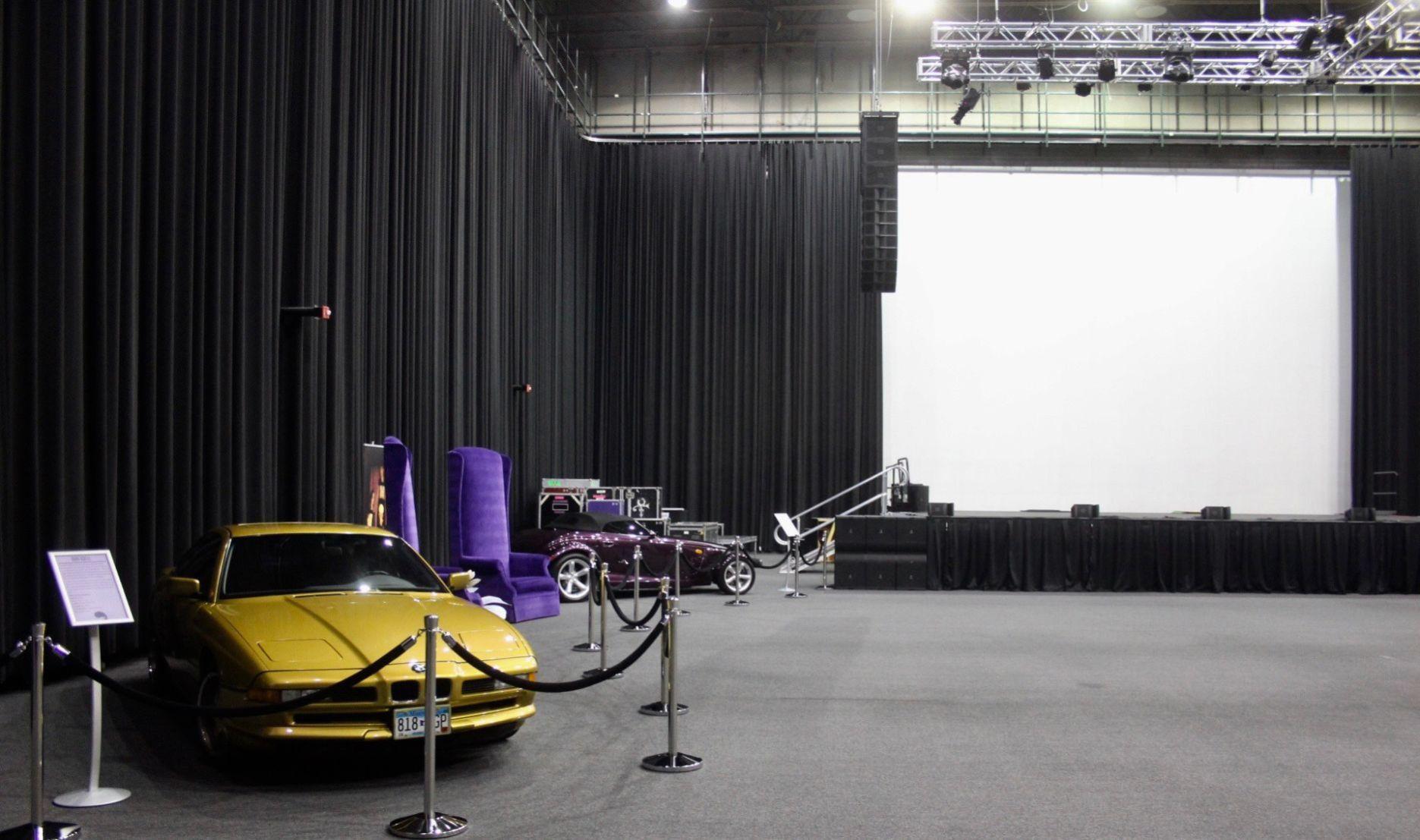 The sound stage at Paisley Park.

One of the activities, a three-film series with emphasis on music that ended Jan. 25, was inspired by Prince’s love of movies. He would often invite people over to Paisley Park, or to the nearby Chanhassen Cinema, for movie nights.

“Our thinking was ‘Let’s invite people over to see great music on the big screen,’” Seiffert said.

The films received positive feedback, he said. Seiffert heard from viewers “Wow, those films were the ones Prince would have selected.” There is something special about watching these films on the big screen using Prince’s sound system, he said. 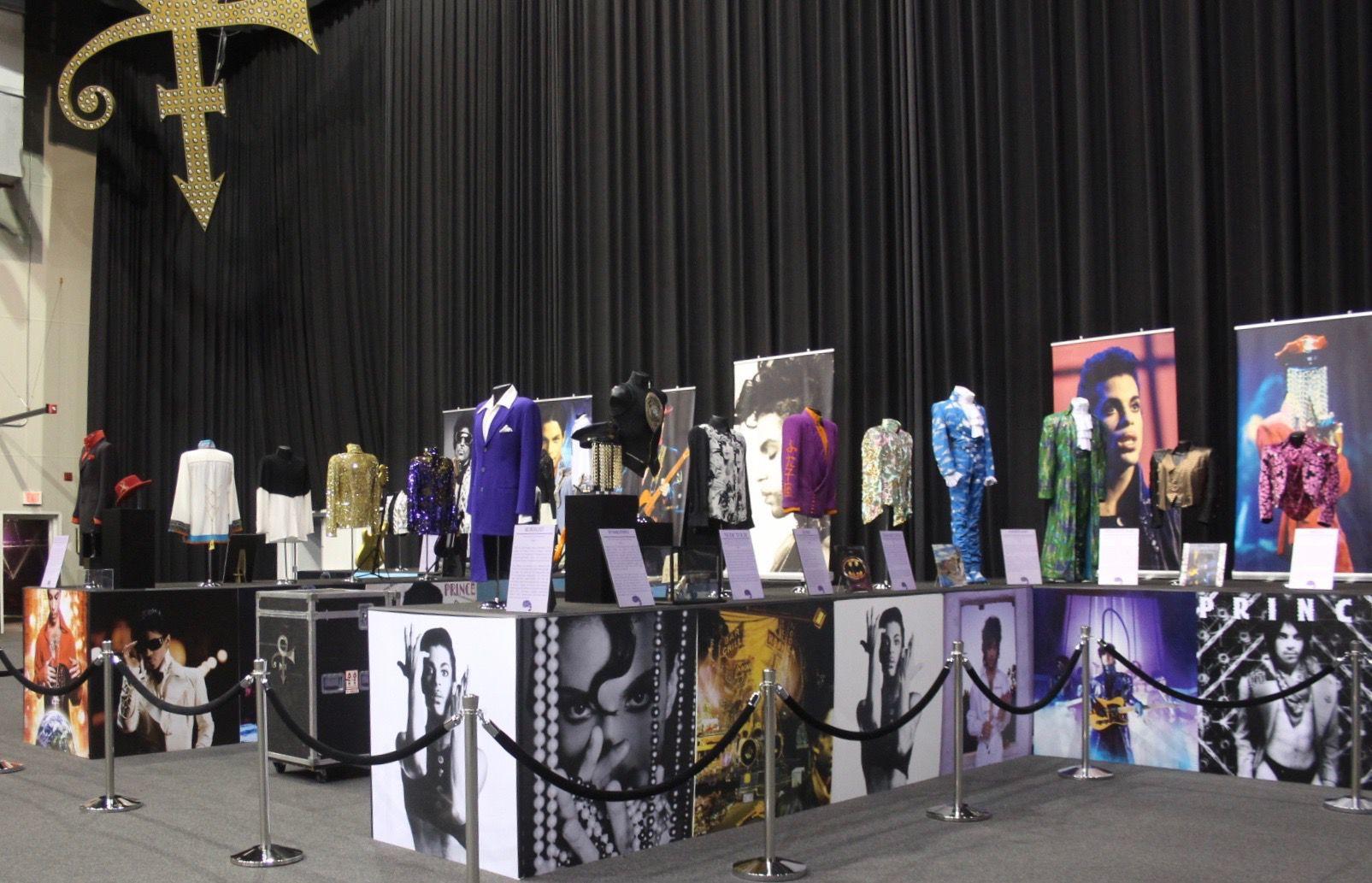 Prince’s wardrobe on display in the sound stage room.

One of the stages at Paisley Park.

“Real music by real musicians was a phrase he used to shout out from the stage,” Seiffert said.

With "Musicology" being one of Prince’s signature albums, Paisley Park felt like it was an important part of who Prince was. So, it decided to launch Musicology in 2020 as a concert series.

The first artist Paisley Park is bringing to the sound stage is critically acclaimed and Grammy nominated Meshell Ndegeocello. She is a renowned bassist and lyricist, Seiffert said. The show is on Saturday Feb. 15. It’s the first of an annual series.

Ndegeocello will reimagine Prince in her performance. “She’s taking the magic of his music and making it her own,” he said.

Paisley Park will serve alcohol at the Feb. 15 Musicology concert. It has selectively served alcohol including wine and spirits for events in the past, Seiffert said. “There is a bit of a misnomer that alcohol wasn’t allowed” at Paisley Park, he said, adding there’s a lot of dispute about the subject.

Seiffert assures that Paisley Park is careful and selective about its events, activities and serving of alcohol. Paisley Park works closely with the city of Chanhassen. It wants to make sure that if it does serve alcohol, that the city, community and Paisley Park are all comfortable with it, he said.

“We are Paisley Park, but we are a part of this community and that’s really important to us,” he said. 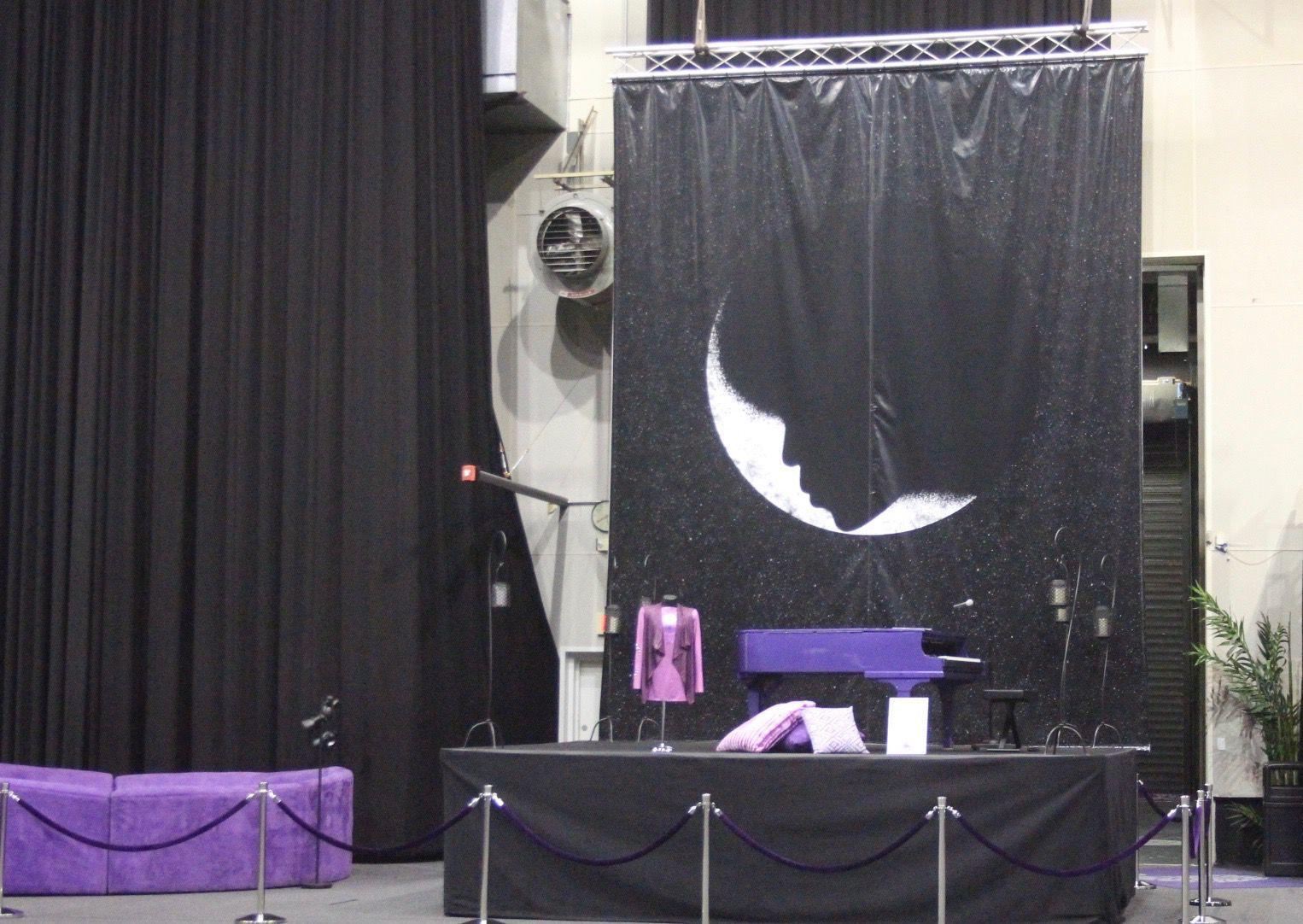 The stage where Prince last performed.

Another event to look forward to is the Celebration 2020, June 4-7. Paisley Park wants this to appeal to hardcore fans, as well as those who have only heard a few songs on the radio, he said. 2020 is “a really critical year. We’re still mourning Prince,” Seiffert said, adding “we’re at the point where we want to lean into the celebratory part.”

Paisley Park decided to move the celebration to June to give it distance from the day of his loss, Seiffert said. It will be a robust weekend to hear his music and enjoy what he’s created and who he’s inspired. 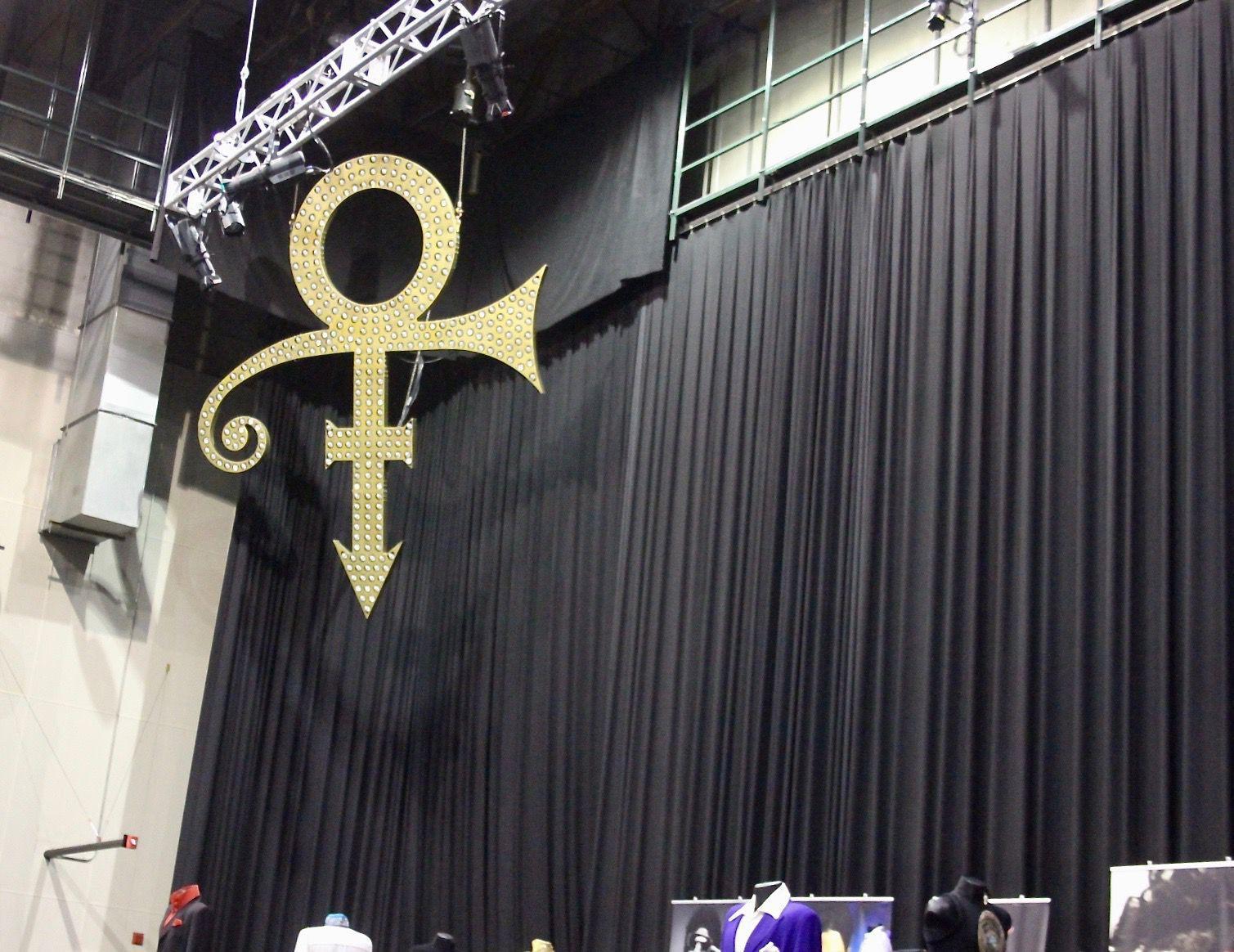 The Love Symbol that hangs in the sound stage room.

The schedule for the rest of the year is full at Paisley Park and long-term ideas are in the works. Over the next couple weeks it will announce more information about the Celebration and other events, he said.

But, Paisley Park doesn’t plan to share all its secrets. “Prince was famous for doing a last minute concert and having some mystery, some surprise,” he said, adding “we’re trying to keep a little bit of that magic.”

Each time an event is booked, it must apply for a permit with the city, which undergoes review by five city staff members. In a phone interview, associate city planner MacKenzie Young-Walters, said the question is whether that level of review is always necessary for a group of 50 people having a glass of wine.

Mayor Elise Ryan directed staff to work on language amending the planned unit development (PUD) permit, and bring it back to council for review.

“We’ve got 12 events permitted a year (per the PUD) and we hit all those last year,” White said. “This year Paisley Park is hoping to do more.”

Once staff brings back amended language to council for review, there would be a public hearing after which time, the City Council could approve the amended PUD.

Mac Gordon hauled in this beauty and won first prize at Feb Fest 2019.

The forecast is mild for the 27th annual Feb Fest at Lake Ann on Saturday, Feb. 1.

“We’ve looked at the forecast and it’s going to be great weather, warm and nice,” said Priya Tandon, recreation supervisor for Chanhassen Parks and Recreation, who is looking forward to overseeing her first Feb Fest.

“We’re all really excited that it’s going to be a nice day, a great winter festival and a chance to come out and enjoy the fresh air,” Tandon said.

Feb Fest is between noon and 3 p.m. Feb. 1 and is free of charge. Everyone gets a free raffle ticket upon entering the frozen lake. Those participating in the ice fishing contest pay a fee of $10 per person. The fishing contest is from 1-3 p.m.

Earlier in the day, the Rotary Club of Chanhassen will be drilling approximately 1,000 ice fishing holes in Lake Ann, and as a co-sponsor, will run the popular fishing contest.

The ice fishing contest runs from 1-3 p.m. Save time and buy your ice fishing ticket online.

Go to www.ci.chanhassen.mn.us through Friday, Jan. 31. Buy tickets online and be eligible to win a $100 gift card from Cabin Fever Sports. Tickets are also available at City Hall.

Tickets are $10 each. Each person is allowed to fish from up to two holes; a ticket is required for each hole. Affix your ticket to your fishing pole or tip-up during the contest. Chanhassen Boy Scouts will be selling bait on the ice.

The top 50 largest fish (measured by weight) will receive prizes. All bass are ineligible for the contest, as well as northerns between 24-36 inches in length. Any fish prizes that are not awarded for largest fish will be drawn in the raffle. All fish will be released immediately after weigh-in.

There are $3,000 in total door prizes. Pick up one free door prize ticket, per person, as you enter the event. You must be present to win. Drawings begin at 1 pm. You may win more than one door prize, but you may only win one of the top 50 fish prizes.

Beginning at noon, there will be dog sled rides, fat tire bikes for riding on ice and snow, an ice skating pond, push sleds on the ice, snowshoeing, and sledding, horse-drawn wagon rides, a kids scavenger hunt by the Riley Purgatory Creek Watershed District and concessions in the Chanhassen Rotary warm up tent.

The Rotary will also be selling beer, hot cocoa and pop. Chanhassen Boy Scout Troop 330 is selling s’mores kits, and everyone can warm themselves by the bonfire on the ice or in the Rotary tent.

The 2020 Medallion Hunt contest has a new sponsor this year, Charter Bank of Chanhassen. Clues for the medallion hunt were released one by one each day beginning at 9 a.m., Monday, Jan. 27, posted on the door of Charter Bank at 455 Pond Promenade, and on the city of Chanhassen website at .ci.chanhassen.mn.us/.

The successful medallion hunter will receive a $500 gift package of gift cards and coupons and more from local businesses.

Event cost: Free of charge and everyone gets a free raffle ticket upon entering the frozen lake.

Fishing cost: Those participating in the ice fishing contest pay a fee of $10 per person. 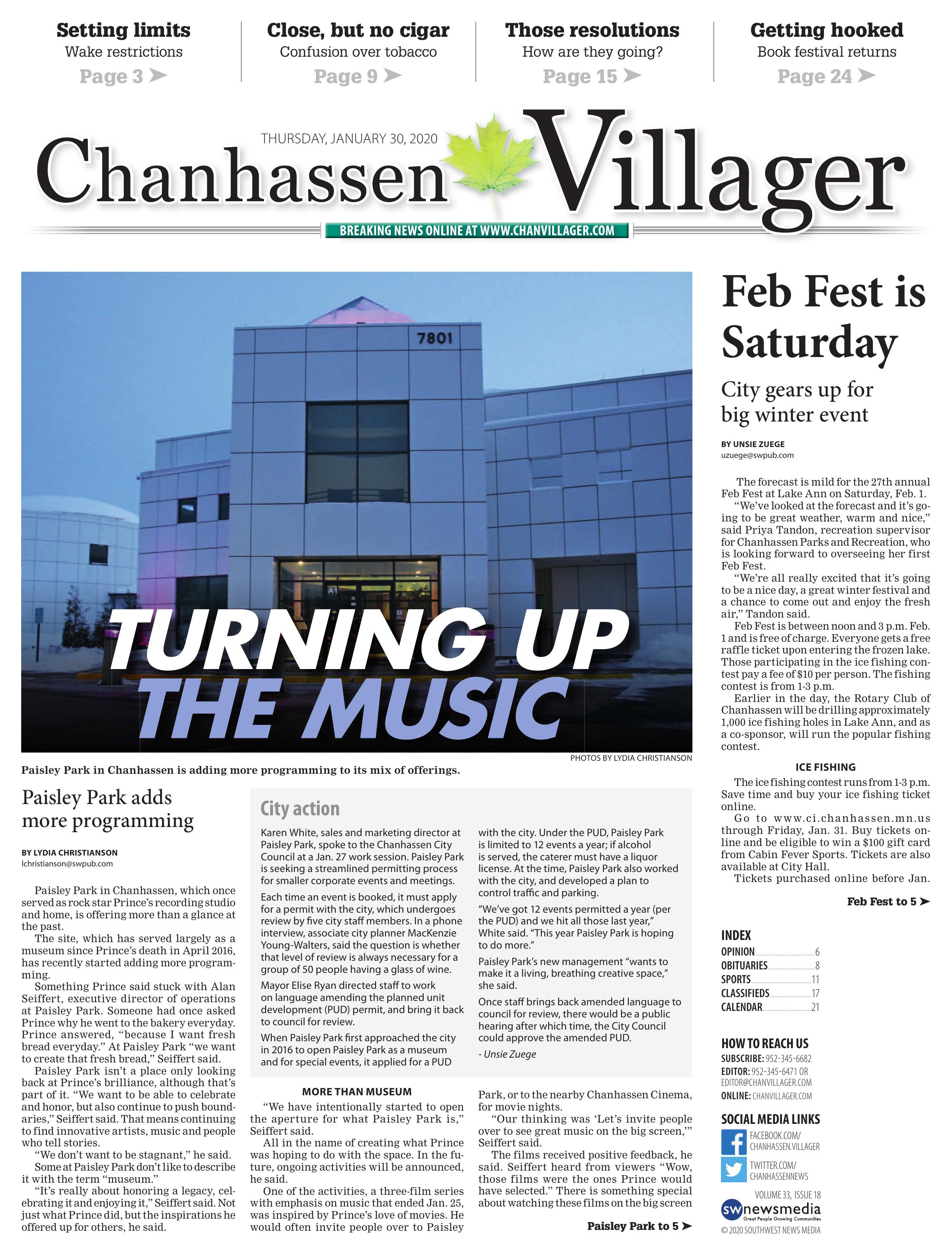