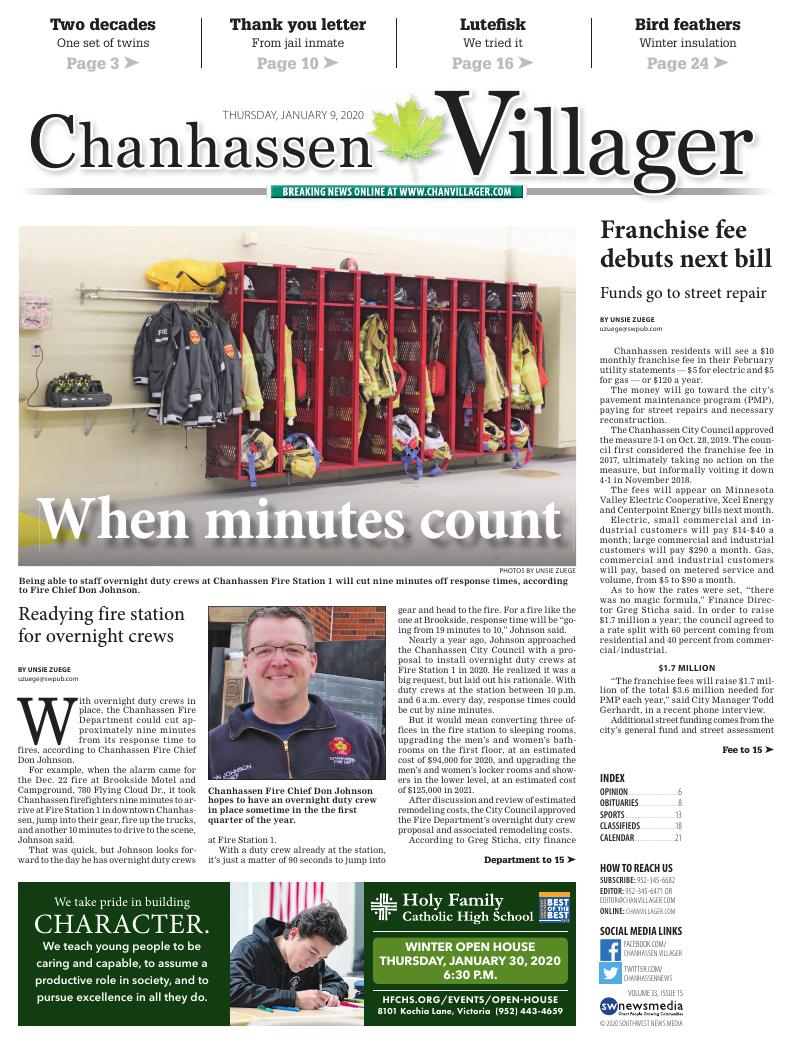 With overnight duty crews in place, the Chanhassen Fire Department could cut approximately nine minutes from its response time to fires, according to Chanhassen Fire Chief Don Johnson.

For example, when the alarm came for the Dec. 22 fire at Brookside Motel and Campground, 780 Flying Cloud Dr., it took Chanhassen firefighters nine minutes to arrive at Fire Station 1 in downtown Chanhassen, jump into their gear, fire up the trucks, and another 10 minutes to drive to the scene, Johnson said.

That was quick, but Johnson looks forward to the day he has overnight duty crews at Fire Station 1.

With a duty crew already at the station, it’s just a matter of 90 seconds to jump into gear and head to the fire. For a fire like the one at Brookside, response time will be “going from 19 minutes to 10,” Johnson said.

Nearly a year ago, Johnson approached the Chanhassen City Council with a proposal to install overnight duty crews at Fire Station 1 in 2020. He realized it was a big request, but laid out his rationale. With duty crews at the station between 10 p.m. and 6 a.m. every day, response times could be cut by nine minutes.

According to Greg Sticha, city finance director, the total annual budgetary impact of the additional overnight duty crew is $150,000, which was included in and approved in the city's 2020 budget.

Johnson is currently in the bidding process. Once bids come in, he will present them to the council for approval. Depending on how bids come in, Johnson said, they may show reduced costs if the upstairs and downstairs projects are completed at the same time. But before that could happen, it would have to be reviewed and approved by the Chanhassen City Council.

Converting the office spaces into sleeping rooms is relatively simple, Johnson said, moving out the office furnishings, painting the walls, and adding beds and bedding. Depending on bids and contractors, he’s hoping he can start overnight duty crews in the first quarter of this year.

The Chanhassen Fire Department is an all-volunteer fire department and currently has 45 paid on-call firefighters, with Johnson and Fire Marshall Don Nutter as full-time staff, and Ana Faturi, half-time as fire department administration.

The department has experienced a steady increase in call volume over the past several years, increasing demands on the firefighters.

Typically, with an on-call system, all available firefighters (from 12 to 15) respond when their pagers go off, day or night. Johnson explained that with scheduled on-duty crews, only those on duty at the station need to respond.

“Typically, most calls require only two or three responders, and the on-duty crew is more cost-effective,” Johnson said.

Currently duty crews are used primarily between 5 p.m. and 10 p.m. Tuesdays through Fridays, and between 4 p.m. and 8 p.m. Saturdays and Sundays, hours that are some of the highest risk times with often some of the lowest response times, Johnson said. A duty crew is also assigned on Mondays, at times when there is no training at the station.

According to Johnson, firefighters like working on duty crews, as it permits them to schedule their hours, providing more flexibility with their personal time. At the same time, they can maintain their call percentages.

Funding from the city's new franchise fee will go toward the city's pavement maintenance program, fixing potholes and much more.

Chanhassen residents will see a $10 monthly franchise fee in their February utility statements — $5 for electric and $5 for gas — or $120 a year.

The money will go toward the city's pavement maintenance program (PMP), paying for street repairs and necessary reconstruction.

The Chanhassen City Council approved the measure 3-1 on Oct. 28, 2019. The council began considered the franchise fee in 2017, ultimately taking no action on the measure, but informally voting it down 4-1 in November 2018.

As to how the rates were set, "there was no magic formula," Finance Director Greg Sticha said. In order to raise $1.7 million a year; the council agreed to a rate split with 60 percent coming from residential and 40 percent from commercial/industrial.

“The franchise fees will raise $1.7 million of the total $3.6 million needed for PMP each year,” said City Manager Todd Gerhardt, in a recent phone interview.

Additional street funding comes from the city's general fund and street assessment program, of which the city pays 60 percent of street reconstruction, while residents are assessed the remaining 40 percent.

Still, based on calls Gerhardt and Mayor Elise Ryan said they have received, some residents feel the issue wasn't discussed enough.

“This shouldn’t be a surprise,” Gerhardt said. “How many meetings did we have on this? We had public input this year and last year.”

"We had more listening sessions and we did more to communicate last year (2019)," Ryan said. "We posted on all social media, created a one-page PDF, and published the questions residents raised in a Q&A."

Since 1991, the city has tracked its street infrastructure. City streets and trails are evaluated every three years and graded on a pavement condition index (PCI), on a scale from 100 for a new street, to 0 for a gravel road. The city generally tries to maintain an overall grade, or PCI, of 70 for city streets. Based on those findings, streets are put on a priority list and a maintenance schedule.

The city's average rating over the past 10 years had been at 70, former city engineer Paul Oehme told the council in 2018. “They are in general, in good condition," he said. (Current Chanhassen Public Works director and city engineer Charlie Howley began in December 2019.)

However, with aging streets (27 miles of roads were built in the 1980s, with another 38 miles in the 1990s), they’re due for maintenance, Ohme had told the council.

At existing funding levels, the PCI would drop to 44 in 20 years, Sticha had told the council.

Sticha and Oehme expected the city would have to spend another $1.3 million annually, for a total of $3.3 million, to maintain the city streets at the existing level.

At its Oct. 28 meeting Mayor Elise Ryan and councilors Jerry McDonald and Dan Campion voted for the franchise fee; voting against was Councilor Bethany Tjornhom. Councilor Julia Coleman was absent.

The process in 2018 felt rushed, Ryan said. "Our discussions led to more questions and I didn’t feel there was enough information at the time.”

Looking back, Ryan said that the first year of discussion was about the council learning about franchise fees and then negotiating with the utility companies.

“Then last year, we did the deep dive and studied it to see if it was the right model,” Ryan said. The city engineer presented more information, which correlated with financial information from the city's finance manager, she said.

A graph helped make up the council’s mind, Gerhardt said.

“Another thing that really hit home is the number of potholes we saw after last winter and how long it took us to fill them in during the summer," Gerhardt said.

“None of us were interested in a new tax,” Ryan said, “but a new graph was presented that not only more clearly showed us how many of our streets were done 30-50 years ago; but also the roads we’re planning to do, along with the mill and overlays needed to to prolong roads and future reconstructions. It changed our perception of what we were going to do and how we were going to do it.

“It was a challenging decision but everyone was on the same page. It was the right amount of money, the roads were identified, and the street crew has identified what they were going to do. What we saw in 2019 was a much more thorough plan, considerably more thorough," Ryan said.

“But the biggest point is that people weren’t opposed to the roads needing attention, but the way of funding for it — a franchise fee or levying for it," Ryan said.

"The franchise fee feels a little sneaky for some people who would rather have a levy. But that doesn’t allow us to collect from those who don’t pay property taxes, and it puts the burden on just residents instead of spreading it out." 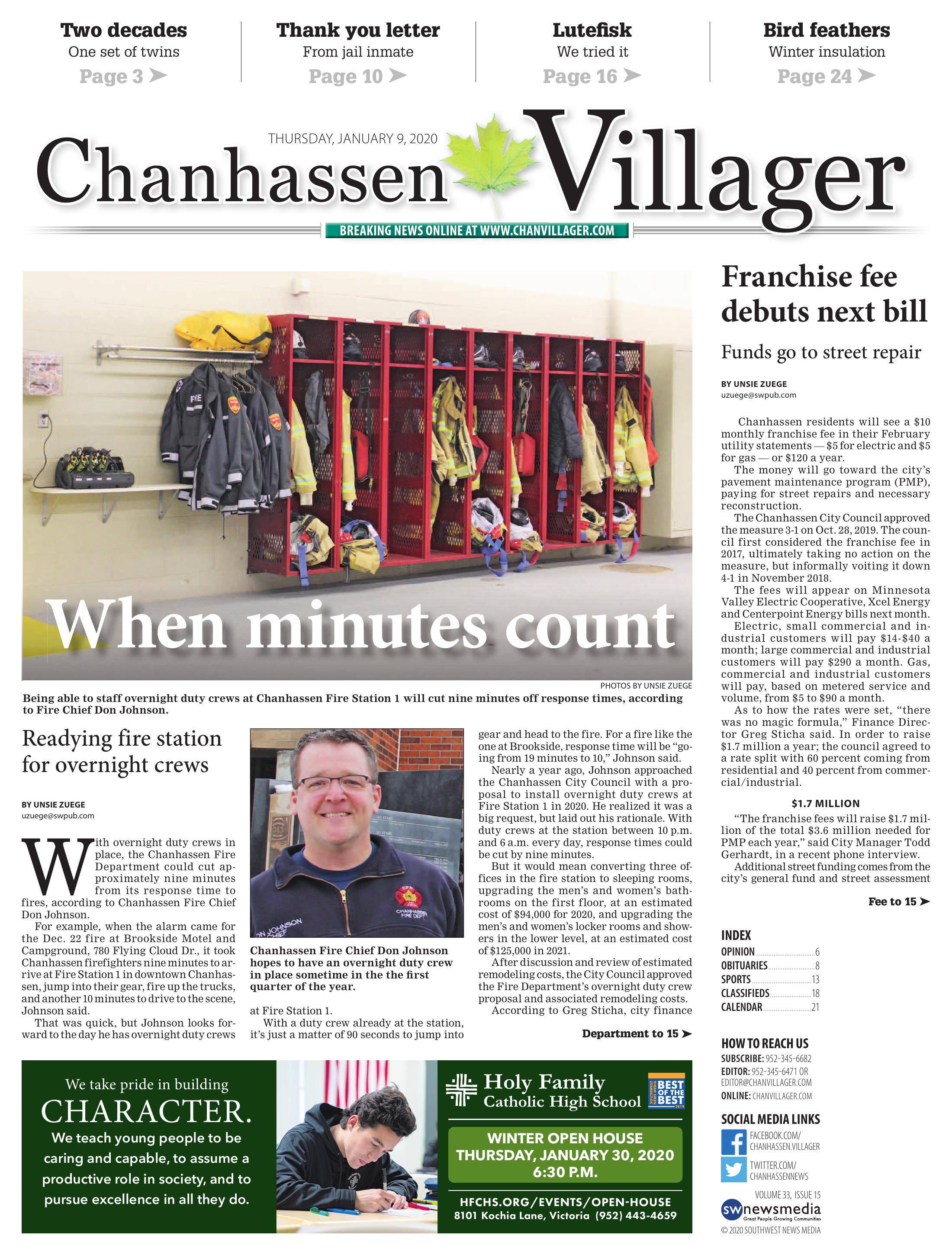