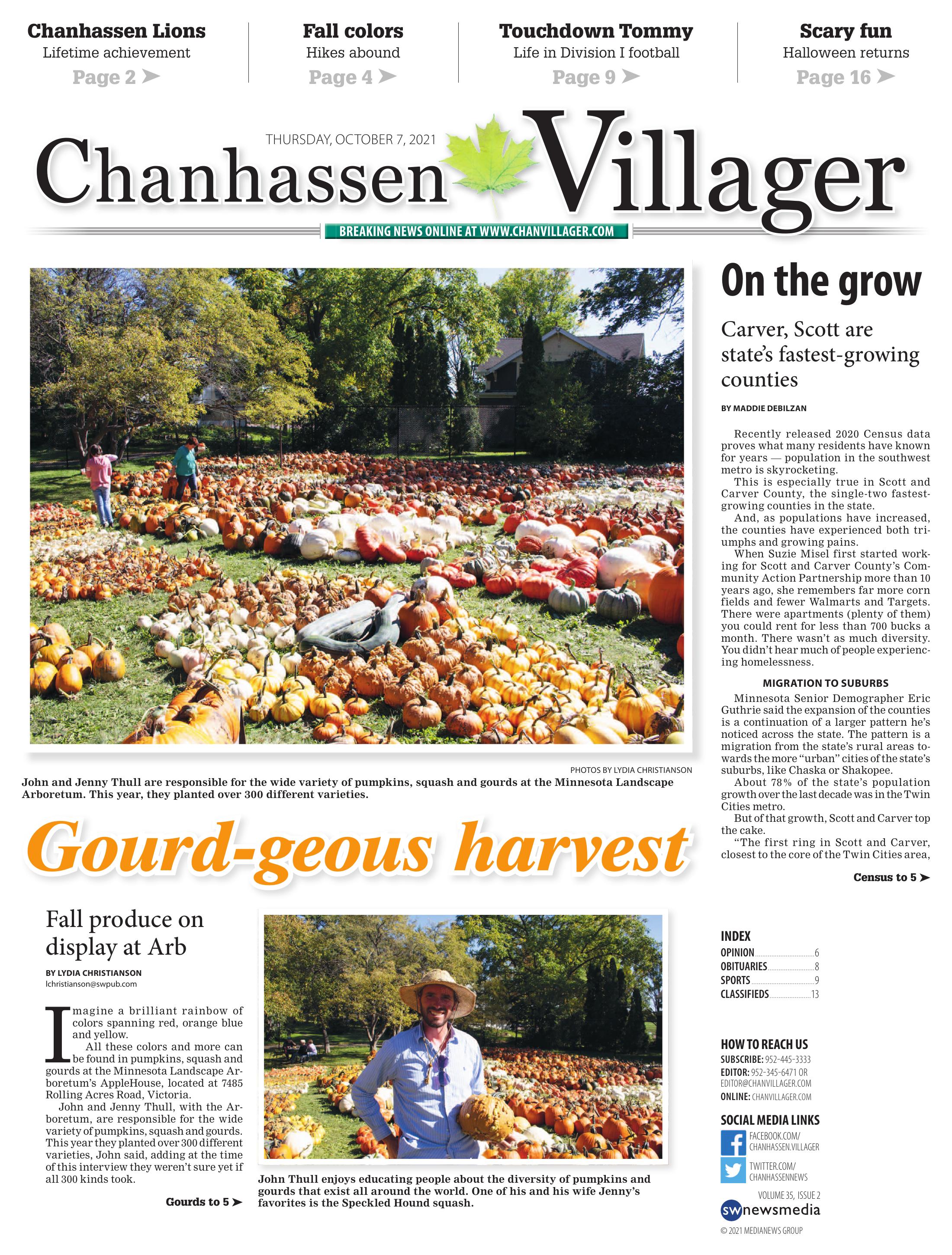 Daisy gourds are just one unique item you can find at the Minnesota Landscape Arboretum’s AppleHouse.

John Thull enjoys educating people about the diversity of pumpkins and gourds that exist all around the world. One of his and his wife Jenny’s favorites is the Speckled Hound squash.

All these colors and more can be found in pumpkins, squash and gourds at the Minnesota Landscape Arboretum’s AppleHouse, located at 7485 Rolling Acres Road, Victoria.

John and Jenny Thull, with the Arboretum, are responsible for the wide variety of pumpkins, squash and gourds. This year they planted over 300 different varieties, John said, adding at the time of this interview they weren’t sure yet if all 300 kinds took.

Visitors of the AppleHouse are in luck. Several of the pumpkins and squash grown by the Thulls make delicious additions to a hearty fall meal.

Most fall food lovers are familiar with the classics, such as spaghetti and butternut squash. But what do the growers themselves enjoy eating? The Thulls like the Australian Butter squash and Marina Di Chioggia, a bumpy blue pumpkin that is a great for making gnocchi.

Another of the Thull’s favorites is the Speckled Hound squash. Both as a grower and as a consumer. It sets a lot of nice fruit and has a great flavor and perfectly moist texture, John said.

The harvest will be available in the AppleHouse as long as the store is open, which is typically through the end of November and sometimes into early December. Apples and grapes will also be for sale while supplies last.

The people responsible for naming the varieties were surely creative. Names include the grizzly bear pumpkin, peanut pumpkin, fireball pumpkin and gremlin gourd. A few daisy gourds arranged in a vase would be a unique and beautiful substitute for a bouquet of flowers.

The Thulls enjoy educating people about the huge diverse groups of pumpkins and squash that exist in different parts of the world. At the Arb, the Thulls have pumpkins and squash from all the places where they are able to grow, such as Australia, Asia, Europe, Africa and South America.

“There’s so much variety within the pumpkins and squash that most people don’t even realize it. People maybe have seen like white pumpkins and think ‘that’s exotic.’ But as you can see here there’s a whole rainbow of colors,” John said.

15 oz. of Speckled Hound squash puree (or any pumpkin puree)

Add butter and shortening and process until homogenous dough just starts to collect in uneven clumps, about 10 seconds (dough will resemble cottage cheese curds with some very small pieces of butter remaining.)

Scrape bowl with rubber spatula and redistribute dough evenly around processor blade. Add remaining ½ cup flour and pulse until mixture is evenly distributed around bowl and mass of dough has been broken up.

Sprinkle vodka and water over mixture. With rubber spatula, use folding motion to mix, pressing down on dough until it is slightly tacky an sticks together. Flatten dough into 4-inch disk. Wrap in plastic and refrigerate for at least 45 minutes or up to two days.

Remove dough from refrigerator and roll out on generously floured work surface to 12-inch circle about 1/8 inch thick. Roll dough loosely around rolling pin and unroll into pie plate, leaving at least 1-inch overhang on each side.

Working around circumference, ease dough into plate by gently lifting edge of dough with one hand while pressing into plate bottom with other hand. Refrigerate for 15 minutes.

Trim overhang to ½ inch beyond lip of pie plate. Fold overhang under itself, folded edge should be flush with edge of pie plate. Using thumb and fore finger, flute edge of dough. Refrigerate dough-line plate until firm, about 15 minutes.

Remove pie pan from refrigerator, line crust with foil and fill with pie weights. Bake on rimmed backing sheet for 15 minutes. Remove foil and weights and rotate play and bake five to 10 additional minutes until crust is golden brown and crisp. Remove pie plate and baking sheet from oven.

While pie shell is baking, whisk cream, milk, eggs, yolk and vanilla together in a medium bowl.

Continue to simmer mixture, stirring constantly and mashing against sides of pot, until thick and shiny for 10 to 15 minutes.

Remove pan from heat and whisk in cream mixture until fully incorporated. Strain mixture through a fine-mesh strainer set over a medium bowl, using a spatula to press solids through strainer.

Return pie plate with baking sheet to oven and bake pie for 10 minutes.

Reduce heat to 300 degrees and continue baking until edges of pie are set, 20 to 35 minutes longer. Transfer pie to wire rack and cool to room temperature, two to three hours. Cut into wedges and serve.

Crews prepare land for future developments in the city of Carver.

Recently released 2020 Census data proves what many residents have known for years — population in the southwest metro is skyrocketing.

This is especially true in Scott and Carver County, the single-two fastest-growing counties in the state.

And, as populations have increased, the counties have experienced both triumphs and growing pains.

When Suzie Misel first started working for Scott and Carver County’s Community Action Partnership more than 10 years ago, she remembers far more corn fields and fewer Walmarts and Targets. There were apartments (plenty of them) you could rent for less than 700 bucks a month. There wasn’t as much diversity. You didn’t hear much of people experiencing homelessness.

Minnesota Senior Demographer Eric Guthrie said the expansion of the counties is a continuation of a larger pattern he’s noticed across the state. The pattern is a migration from the state’s rural areas towards the more “urban” cities of the state’s suburbs, like Chaska or Shakopee.

About 78% of the state’s population growth over the last decade was in the Twin Cities metro.

But of that growth, Scott and Carver top the cake.

“The first ring in Scott and Carver, closest to the core of the Twin Cities area, those areas have grown the most,” Guthrie said.

That didn’t surprise Minnesota Senior Demographer Eric Guthrie, who said the majority of that growth occurs in the most densely-populated areas of the state, like St. Paul and Minneapolis.

“Proximity to (the cities) is why we’re seeing the increases in diversity to begin with,” Guthrie said.

Scott and Carver County officials have long anticipated the migration towards the suburbs.

A 90-page housing blueprint created by the Scott County Association for Leadership and Efficiency, or SCALE, gives Scott County residents options for safe, stable and affordable homes. The blueprint outlines the organization’s top three goals for the future of Scott County’s housing: the preservation of housing stock, a balanced supply of housing options and accessible community design in residential developments.

Fred Corrigan, co-chair of the Housing Committee for Scott County’s Live, Learn, Earn initiative within SCALE, told the newspaper earlier this summer that housing, specifically for seniors, has become an increasing concern for the area.

In Scott County, for example, 17% of residents are renters, according to the housing blueprint. The average household income of those renters decreased by 1%, while their rent prices increased by 21%.

“There are all kinds of problems that can arise (when populations grow like this),” Guthrie said. “School capacity, access to transportation, housing.”

A growing population means growing needs. Misel, who has spent the past 10 years trying to figure out how to manage those needs, said the community as a whole has stepped up to address rising concerns related to housing, mental health, food insecurity, and other needs.

“The food shelf has provided much fresher foods. Now we’re getting produce, milk, all those kinds of things,” Misel said.

Live, Learn, Earn is working on getting 50% of the people who live in Scott County to also work in the community.

Launch Ministry in Chaska exists to assist young adults in crisis. Esperanza serves kids and families through food drives, summer camps and community resources. Guild provides mental health care and stable housing for people in the community who need it. Many of those organizations did not exist, or did not have the same presence, as they did in 2010.

“We’re better at counting the people who are experiencing homelessness, too,” Misel said. “We’ve come a long way in learning how to serve the homeless population.”

When Misel first started working at the CAP Agency, there were six staff members in the housing department. Now, there are 12.

While Guthrie said he doesn’t have a crystal ball, the work-from-home culture brought on from the pandemic may push even more people to the suburbs in the next decade.

White alone, not Hispanic or Latino