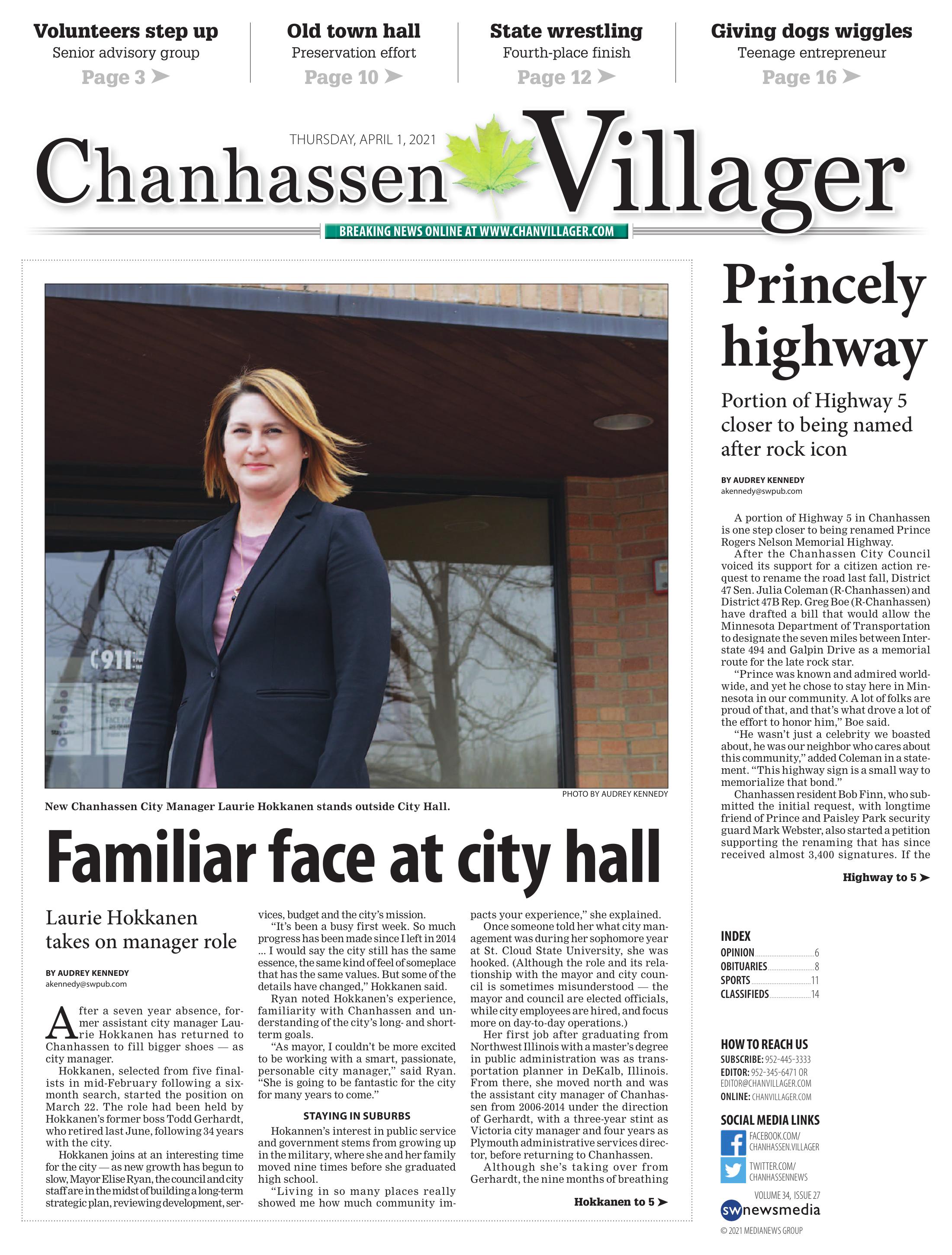 Hokkanen, selected from five finalists in mid-February following a six-month search, started the position on March 22. The role had been held by Hokkanen's former boss Todd Gerhardt, who retired last June, following 34 years with the city.

Hokkanen joins at an interesting time for the city — as new growth has begun to slow, Mayor Elise Ryan, the council and city staff are in the midst of building a long-term strategic plan, reviewing development, services, budget and the city's mission.

“It’s been a busy first week. So much progress has been made since I left in 2014 ... I would say the city still has the same essence, the same kind of feel of someplace that has the same values. But some of the details have changed,” Hokkanen said.

Ryan noted Hokkanen’s experience, familiarity with Chanhassen and understanding of the city’s long- and short-term goals.

“As mayor, I couldn’t be more excited to be working with a smart, passionate, personable city manager,” said Ryan. “She is going to be fantastic for the city for many years to come.”

Hokannen’s interest in public service and government stems from growing up in the military, where she and her family moved nine times before she graduated high school.

“Living in so many places really showed me how much community impacts your experience,” she explained.

Once someone told her what city management was during her sophomore year at St. Cloud State University, she was hooked. (Although the role and its relationship with the mayor and city council is sometimes misunderstood — the mayor and council are elected officials, while city employees are hired, and focus more on day-to-day operations.)

Her first job after graduating from Northern Illinois University with a master’s degree in public administration was as transportation planner in DeKalb, Illinois. From there, she moved north and was the assistant city manager of Chanhassen from 2006-2014 under the direction of Gerhardt, with a three-year stint as Victoria city manager and four years as Plymouth administrative services director, before returning to Chanhassen.

Although she’s taking over from Gerhardt, the nine months of breathing room gave the city enough time to adjust to a new leadership style, she said.

And her work has already begun.

A focus on strategic planning was a major emphasis during the hiring process, and Hokkanen attended a day-long planning retreat before her official start date.

“A lot of the growth in Chanhassen has already occurred, and that’s a fun time for a city to figure out what their next phase looks like. [This plan] is really going to give us that roadmap to decide what our priorities are. Where do we spend our time? Where do we spend our money? How do we keep reinvesting in the community? We’re making a guiding frame with which the council can make decisions,” she said.

Hokkanen described her style as very collaborative, with interest in big visions and big ideas. As for her other goals?

Building a strong staff, where everyone feels valued and understands how their work contributes to the city’s mission, is one. Community engagement and involvement with the strategic plan is also vital, with her and the mayor taking their presentation “on the road” to get feedback from residents.

Living nearby in Chaska also helps, she said. The sister city is far enough that she isn’t personally affected by city decisions, but close enough that she has a feel for the city’s dynamics outside of office hours. Her sons love the Fourth of July fishing contest, and Hokkanen named Chanhassen’s park system her favorite part of the city.

“I’m excited. It’s a little bit surreal ... I always knew I’d be interested in coming back, but I wasn’t making plans for that. But the timing worked out well, and I’m just happy to be part of the team.”

Paisley Park in Chanhassen will be open for fans to pay tribute to Prince on the fifth anniversary of his death.

A portion of Highway 5 in Chanhassen is one step closer to being renamed Prince Rogers Nelson Memorial Highway.

After the Chanhassen City Council voiced its support for a citizen action request to rename the road last fall, District 47 Sen. Julia Coleman (R-Chanhassen) and District 47B Rep. Greg Boe (R-Chanhassen) have drafted a bill that would allow the Minnesota Department of Transportation to designate the seven miles between Interstate 494 and Galpin Drive as a memorial route for the late rock star.

“Prince was known and admired worldwide, and yet he chose to stay here in Minnesota in our community. A lot of folks are proud of that, and that’s what drove a lot of the effort to honor him,” Boe said.

“He wasn’t just a celebrity we boasted about, he was our neighbor who cares about this community,” added Coleman in a statement. “This highway sign is a small way to memorialize that bond.”

Chanhassen resident Bob Finn, who submitted the initial request, with longtime friend of Prince and Paisley Park security guard Mark Webster, also started a petition supporting the renaming that has since received almost 3,400 signatures. If the bill passes, the two will be responsible for the cost of the signs — around $2,000 — but Finn said it’s likely the community will help out.

“We’re just excited and encouraged that there’s so much support there. We’re going to do a crowdfunding effort to get the signs paid for ... Prince has fans all around the world, and I think once [the state] approves the change, we’ll get even more traction,” Finn said.

However, renaming a part of Highway 5 is not as easy as putting up a new sign.

Fifty miles of Highway 5, including the potential Prince segment, is already a memorial highway, named after former Sibley County state senator Augie Mueller. The Minnesota Department of Transportation does not allow new memorial designations on highways already named, so the Mueller family would have to give up a portion of the road.

After speaking with the family, Boe said they are open to the change, but would want to make sure the Sibley County portion, where Mueller lived and served, remains intact. Only the portions in Chanhassen would change, he added.

As of late March, both the House and Senate bills to allow the change have been drafted, Boe said. But despite Finn and Webster’s hopes of getting the sign up by Prince’s birthday on June 7, it probably won’t be approved this year.

2021 is a year focused on the state budget, and the bill’s discussion will most likely be pushed back to the beginning of next year’s session in February, Boe said. As long as there are no major changes, Finn and Webster could get the go-ahead by March 2022.

As to if the sign can be purple? MnDOT isn’t known to allow colors other than brown, but “we’ll try our best,” Boe said.

“Maybe we can have a purple symbol,” he said.