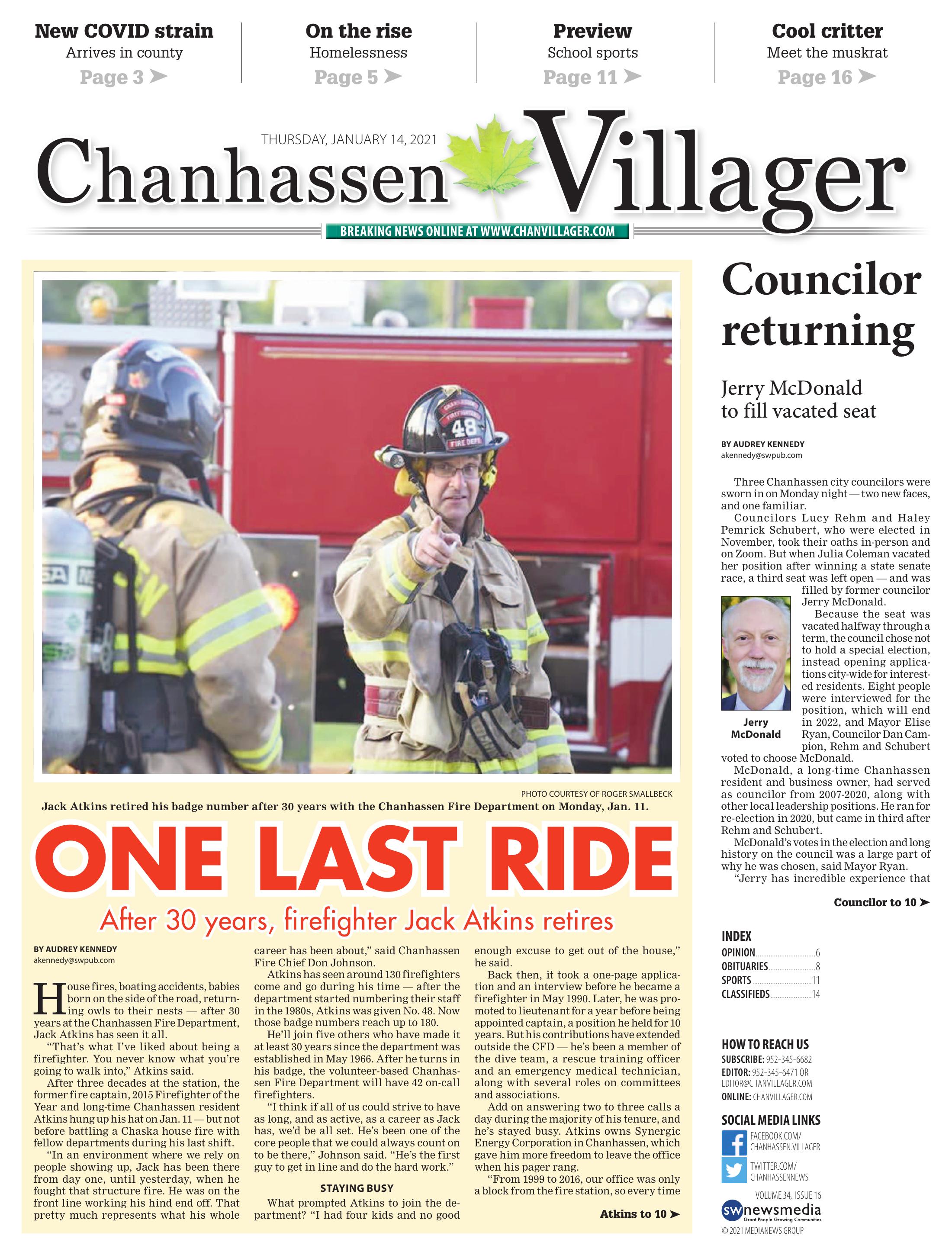 Jack Atkins retired his badge number after 30 years with the Chanhassen Fire Department on Monday, Jan. 11.

House fires, boating accidents, babies born on the side of the road, returning owls to their nests — after 30 years at the Chanhassen Fire Department, Jack Atkins has seen it all.

“That’s what I’ve liked about being a firefighter. You never know what you’re going to walk into,” Atkins said.

After three decades at the station, the former fire captain, 2015 Firefighter of the Year and long-time Chanhassen resident Atkins hung up his hat on Jan. 11 — but not before battling a Chaska house fire with fellow departments during his last shift.

“In an environment where we rely on people showing up, Jack has been there from day one, until yesterday, when he fought that structure fire. He was on the front line working his hind end off. That pretty much represents what his whole career has been about,” said Chanhassen Fire Chief Don Johnson.

Atkins has seen around 130 firefighters come and go during his time — after the department started numbering their staff in the 1980s, Atkins was given No. 48. Now those badge numbers reach up to 180.

He'll join five others who have made it at least 30 years since the department was established in May 1966. After he turns in his badge, the volunteer-based Chanhassen Fire Department will have 42 paid on-call firefighters.

“I think if all of us could strive to have as long, and as active, as a career as Jack has, we’d be all set. He’s been one of the core people that we could always count on to be there,” Johnson said. “He’s the first guy to get in line and do the hard work.”

What prompted Atkins to join the department? “I had four kids and no good enough excuse to get out of the house,” he said.

Back then, it took a one-page application and an interview before he became a firefighter in May 1990. Later, he was promoted to lieutenant for a year before being appointed captain, a position he held for 10 years. But his contributions have extended outside the CFD — he’s been a member of the dive team, a rescue training officer and an emergency medical technician, along with several roles on committees and associations.

Add on answering two to three calls a day during the majority of his tenure, and he’s stayed busy. Atkins owns Synergic Energy Corporation in Chanhassen, which gave him more freedom to leave the office when his pager rang.

“From 1999 to 2016, our office was only a block from the fire station, so every time the pager went off, I could usually take the call,” he said. “We eventually moved, but we’re still only a few blocks away.”

In 2020, the department had around 900 calls, and Atkins estimated he attended 550 of them. Now that shifts are scheduled, he doesn’t go out as much, but there’s always something to do.

“For the first 20 years, the pager goes off and I’d go straight to the station and hop on a truck,” he said.

After 30 years, there’s bound to be some changes at the department, but the biggest revamp Atkins saw didn’t come until last year.

In 2020, the department began adopting a “duty-crew” system, where firefighters take paid day and overnight shifts at the station. With an on-call system, typically all available firefighters respond when their pagers go off. But with duty-crew, only the people at the station respond — and most calls only require two to three firefighters anyway, making the new system more cost-effective and efficient.

Fire causes haven’t changed much, Atkins said — people aren’t smoking cigarettes in bed as much anymore, though the butts still fall into leaves — but the department’s response time has. With duty crews already at the station, it takes half the time it used to to get a truck out, and they know exactly who will be showing up, instead of paging all firefighters to see who can come in.

“The program got accelerated dramatically because of COVID, but our response times are a lot better. ... I think a lot of Chanhassen residents are unfamiliar with how it works, because people often think we’re at the station waiting for something to happen,” Atkins said. “And now the only time you have to call up the whole fire department is if it’s a big incident.”

Another addition in the last few years has been a focus on safety and mental health. The Minnesota Fire Initiative, co-founded in 2016 by an Eden Prairie firefighter, provides education and resources for firefighters that have developed PTSD, along with other physical and mental health challenges.

“This job has its good and its bad. I’ve probably done CPR on hundreds of people, but only the single digits survive. It weighs heavy every time … I try not to dwell on it,” Atkins said. "And we have these resources if you do need them." 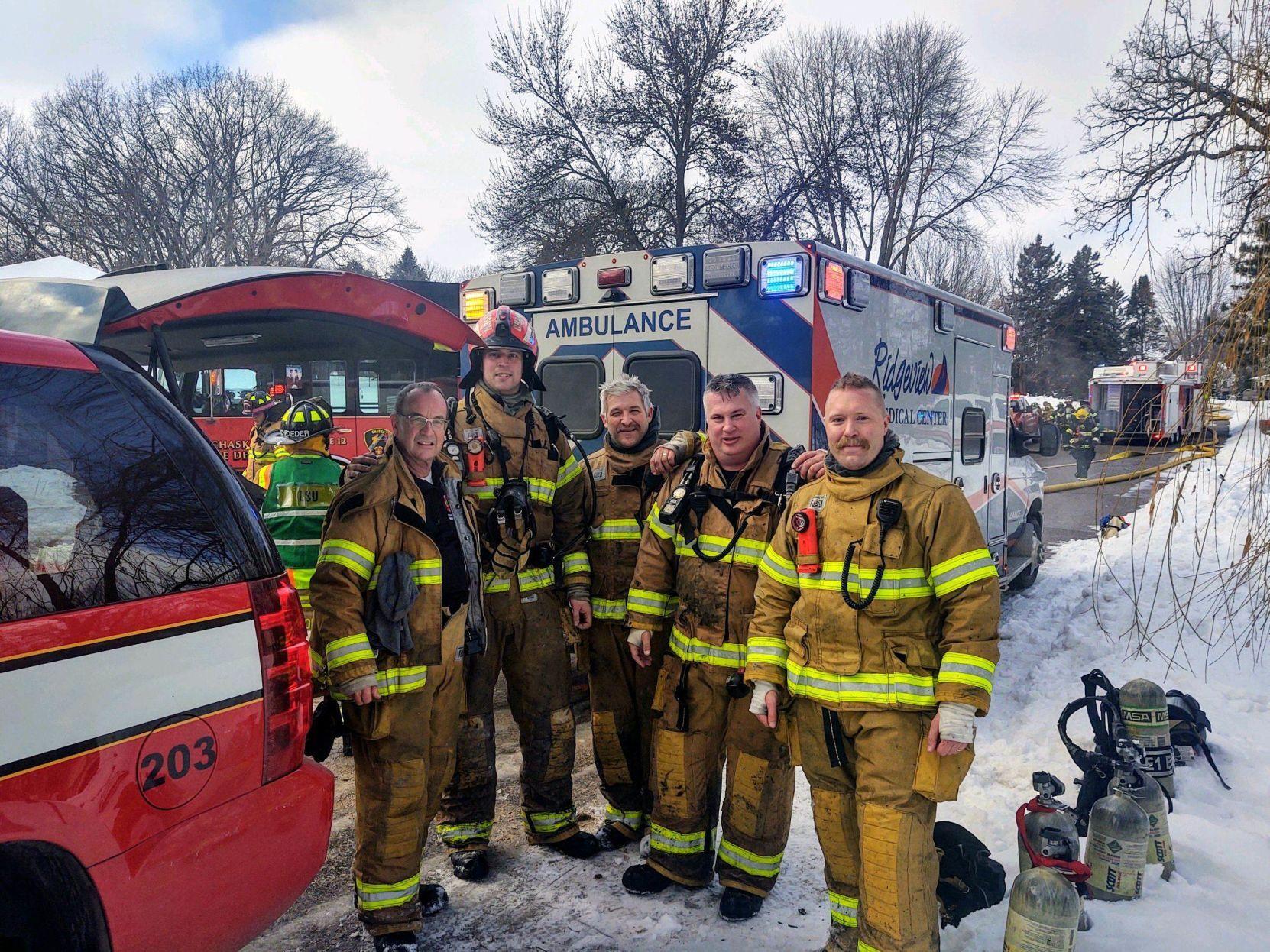 Jack Atkins, at far left, was surprised by his fellow firefighters after his final call on Sunday, Jan. 10.

Though Atkins’ last day was a busy one, the department still had time for a COVID-safe surprise goodbye. Members lined up their equipment across from his house, and the team prepared a script thanking him for his 30 years of service that they played over the dispatch. Friends and family clapped and cheered, the chaplain gave a short speech and Atkins signed off as badge No. 48.

The surprise was a stand-in for the eventual Chanhassen City Council presentation and acknowledgement that will happen later this year. Once restrictions are lifted, they’ll have their big ceremony — but until then, it’s take-out lunch with his fellow duty crew, Atkins said.

The crew is one of the main reasons he stuck around for so long. Around 60% of the department has been there for at least a decade, he estimated.

“The camaraderie of working with a bunch of firefighters is one of my favorite things about the place,” he said. “ Though I don’t know if I can be up to the task of dragging a firefighter out of a burning house anymore.”

What will he do with his free time? He’s not sure, he said — but he’ll still keep up with the department.

“One of my employees is also a volunteer firefighter, so I’ll know when his pager goes off what I’m missing,” he said. “But it’ll be a little more boring not being able to rush off to fire calls once in a while.”

Three Chanhassen City Councilors were sworn in on Monday night — two new faces, and one familiar.

Councilors Lucy Rehm and Haley Pemrick Schubert, who were elected in November, took their oaths in-person and on Zoom. But when Julia Coleman vacated her position after winning a state senate race, a third seat was left open — and will be filled by former councilor Jerry McDonald.

Because the seat was vacated halfway through a term, the council chose not to hold a special election, instead opening applications city-wide for interested residents. Eight people were interviewed for the position, which will end in 2022, and Mayor Elise Ryan, Councilor Dan Campion, Rehm and Schubert voted to choose McDonald.

McDonald, a long-time Chanhassen resident and business owner, had served as councilor from 2007-2020, along with other local leadership positions. He ran for re-election in 2020, but came in third after Rehm and Schubert.

McDonald’s votes in the election and long history on the council was a large part of why he was chosen, said Mayor Ryan.

“Jerry has incredible experience that will be invaluable. We have a new city manager coming on board and two new city council members, and there really is something to say about having that historical knowledge about the city,” Ryan said.

McDonald’s nameplate was returned to the chambers and he took his seat immediately, ready for the meeting’s next vote.

“Thank you to everyone who showed support for me throughout, and to the council for showing support and confidence on my ability to work with you and make Chanhassen a better place,” McDonald said.