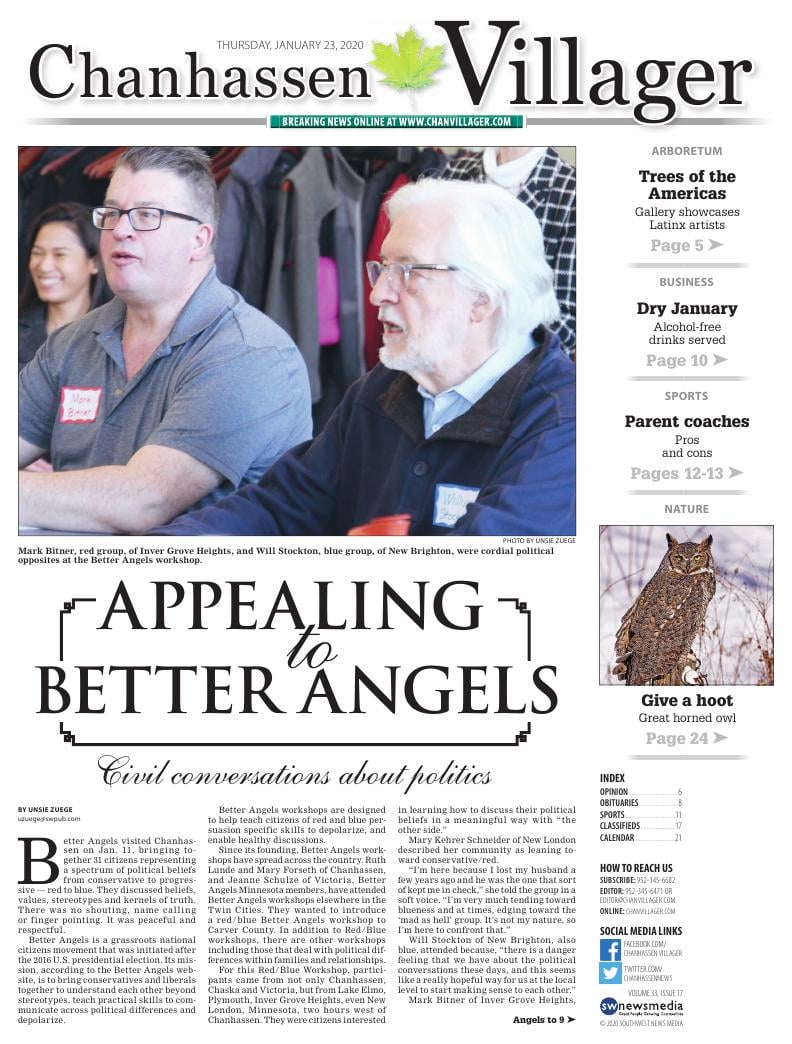 Better Angels visited Chanhassen on Jan. 11, bringing together 31 citizens representing a spectrum of political beliefs from conservative to progressive — red to blue. They discussed beliefs, values, stereotypes and kernels of truth. There was no shouting, name calling or finger pointing. It was peaceful and respectful.

Better Angels is a grassroots national citizens movement that was initiated after the 2016 U.S. presidential election. Its mission, according to the Better Angels website, is to bring conservatives and liberals together to understand each other beyond stereotypes, teach practical skills to communicate across political differences and depolarize.

For this Red/Blue Workshop, participants came from not only Chanhassen, Chaska and Victoria, but from Lake Elmo, Plymouth, Inver Grove Heights, even New London, Minnesota, two hours west of Chanhassen. They were citizens interested in learning how to discuss their political beliefs in a meaningful way with “the other side.”

Mary Kehrer Schneider of New London described her community as leaning toward conservative/red.

“I’m here because I lost my husband a few years ago and he was the one that sort of kept me in check,” she told the group in a soft voice. “I’m very much tending toward blueness and at times, edging toward the ‘mad as hell’ group. It’s not my nature, so I’m here to confront that.”

Will Stockton of New Brighton, also blue, attended because, “there is a danger feeling that we have about the political conversations these days, and this seems like a really hopeful way for us at the local level to start making sense to each other.”

Mark Bitner of Inver Grove Heights, a red, said, “I look around at the people in this room and I think we find that we are all in this together, and that outside of this room, it’s very difficult to get together with people.” Bitner got a laugh when he added, “So I sat next to Will and it feels good to not be fighting.”

Stan Adams of Victoria, a red, also prompted a ripple of laughter when he said, “I would like to be able to talk to people about my conservative views, especially my wife, who is more of a blue.”

District 47 State Sen. Scott Jensen (R-Chaska) also attended. His wife saw a news item in a local newspaper and suggested he check it out. He only planned to drop by to learn about Better Angels, but after learning more, decided to stay and participate. He prompted some laughter when it was pointed out he was wearing a blue name tag. “So when did you become a Democrat?” one of the participants teased. Jensen shrugged and smiled, admitting he was color blind and picked the wrong color.

The format is seemingly simple. When people check in, they get a red or blue name tag identifying their political leaning.

The moderators introduce themselves, the schedule for the day, and a basic outline of the workshop exercises, and most importantly the ground rule: “We’re here to understand others and explain our views; not to convince anyone to change their mind.”

All the participants introduce themselves, what city they’re from, their color (blue or red), and why they came. Then seven volunteers of each color are called on. They’ll be the active participants in the workshop. Everyone else observes and remains silent.

The red and blue groups separate to different rooms. A moderator directs each group to list the common stereotypes of their group, and then honed the list down to a few stereotypes.

Words and phrases that the red group came up with: “Lack of compassion, greedy, no concern for the environment, you’re on your own, and gun-toting rednecks.”

Then they were challenged to find the kernel of truth in those stereotypes, and the reasons why.

Then the two groups got back together, and the blues and the reds took individual turns describing what they learned about how the other side sees them. And then were asked if they saw any commonalities. Throughout, participants and observers listened intently, many taking notes.

After a break, the group reconvened. This time they did the “fishbowl” exercise. There is an inner circle of chairs, surrounded by an outer circle of chairs. Each group takes a turn in the inner circle, again answering the exercise questions among themselves: First the red group. “Why do you think that your side’s values and policies are good for the country?” And then “What are your reservations or concerns about your own side?”

After 15 minutes, the two colors exchanged places, blues inside the fishbowl, the reds outside, again, just listening.

Participants had to state their own reasoning behind their statements without referring to someone else’s opinion, what they heard on the news or read, or heard about a political figure. It had to be their own opinion and reasoning for it.

The format ensured that the exchange of ideas and opinions was respectful, measured, and provide ample opportunity for each color to speak and to listen.

Finally, the last exercise was bringing both colors together and asking the group, alternating between the reds and the blues, “What did you learn about how the other side sees themselves?” And then, “Did you see anything in common?”

Lunde said she and her Better Angels organizers were impressed by the number of participants.

“Most workshops don’t have that kind of attendance,” she said. Due to interest, the next Red/Blue Better Angels Workshop is scheduled for 1:30-4 p.m., Saturday, Feb. 15, again at the Wilder Room in the Chanhassen Library. Lunde pointed out that other workshops and topics are held throughout the Twin Cities. Those interested in attending can go to better-angels.org/minnesota/ to find a schedule of workshops and locations.

“We had a lot of positive feedback,” Lunde said afterward. “People said they were glad they attended the session, and that they were surprised to realize some common ground.”

Sen. Jensen emailed his response to the newspaper.

“What a heartening experience to attend the recent Better Angels workshop in Chanhassen!” Jensen said. “Republicans and Democrats gathered together to gain insight into one another’s perspectives, but even more importantly, had the chance to engage in exercises designed for discovering common ground. Having to describe a viewpoint other than one’s own forced a healthy reconsideration of differing opinions. Our country needs more of this kind of discussion.”

Families and politics: How to talk with loved ones on the other side

What: Attendance limited to 80, free. To preserve important family bonds while still being true to values and political beliefs, this workshop will offer:

What: Workshop format is the same as the Jan. 11 work session 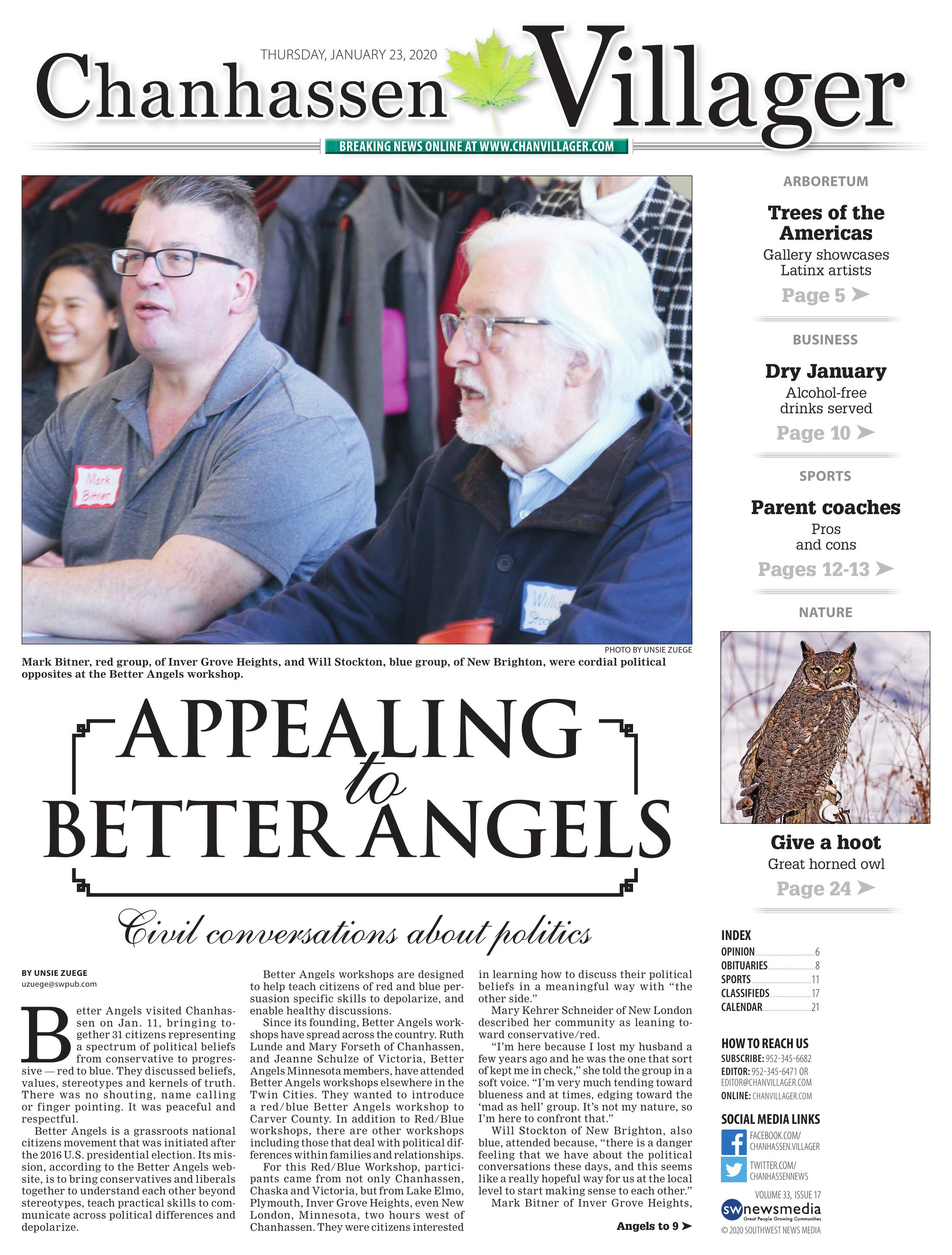