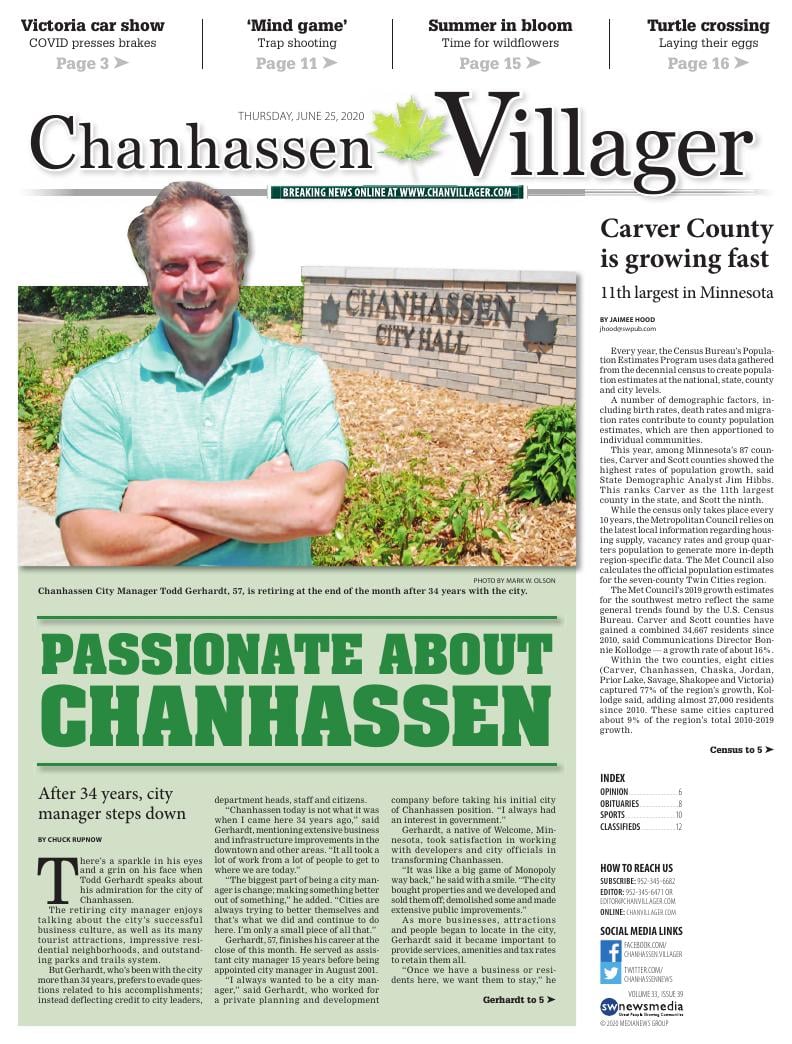 Chanhassen City Manager Todd Gerhardt, 57, is retiring at the end of the month after 34 years with the city.

There’s a sparkle in his eyes and a grin on his face when Todd Gerhardt speaks about his admiration for the city of Chanhassen.

The retiring city manager enjoys talking about the city’s successful business culture, as well as its many tourist attractions, impressive residential neighborhoods, and outstanding parks and trails system.

But Gerhardt, who’s been with the city more than 34 years, prefers to evade questions related to his accomplishments; instead deflecting credit to city leaders, department heads, staff and citizens.

“Chanhassen today is not what it was when I came here 34 years ago,” said Gerhardt, mentioning extensive business and infrastructure improvements in the downtown and other areas. “It all took a lot of work from a lot of people to get to where we are today.”

“The biggest part of being a city manager is change; making something better out of something,” he added. “Cities are always trying to better themselves and that’s what we did and continue to do here. I’m only a small piece of all that.”

Gerhardt, 57, finishes his career at the close of this month. He served as assistant city manager 15 years before being appointed city manager in August 2001.

“I always wanted to be a city manager,” said Gerhardt, who worked for a private planning and development company before taking his initial city of Chanhassen position. “I always had an interest in government.”

Gerhardt, a native of Welcome, Minnesota, took satisfaction in working with developers and city officials in transforming Chanhassen.

“It was like a big game of Monopoly way back,” he said with a smile. “The city bought properties and we developed and sold them off; demolished some and made extensive public improvements.”

As more businesses, attractions and people began to locate in the city, Gerhardt said it became important to provide services, amenities and tax rates to retain them all.

“Once we have a business or residents here, we want them to stay,” he emphasized. “I am passionate about Chanhassen, about trying to make Chanhassen a better community. My tagline has been: ‘Chanhassen is a community for life.’”

Gerhardt is “most proud of hiring good employees; trying to find people who are passionate about what they do.”

Former mayor Tom Furlong, who worked closely with Gerhardt for 12 years, called Gerhardt “an exceptional professional. It is hard to express how valuable Todd Gerhardt is and has been to the quality of life that all of us enjoy here in the city.”

Furlong highlighted Gerhardt’s ability to find and hire “really good people with tremendous skills and potential,” adding that Gerhardt was a “solid mentor to city officials in Chanhassen and other communities.”

Jerry Ruegemer, recreation superintendent, said Gerhardt “has been a beacon of light for the city all these years. He has been diligent about doing what is best for the citizens and led by example.

“He is very knowledgeable in all aspects of local government and is a person you could go to for ideas and direction,” Ruegemer added.

Kate Aanenson, community development director who has been with the city in various positions since 1991, appreciates Gerhardt’s leadership.

“That comes with sticking through the rough spots,” she said. “He’s really good about trusting staff; stepping in when he needs to but letting you run with your stuff.

“Surveys show people are happy with the city and appreciate living in the city,” Aanenson added. “Todd set that tone. He was just a great, great leader.”

Mayor Elise Ryan mentioned Gerhardt’s “genuine passion and love for Chanhassen,” adding that he “has led with a steadfast hand and always with the best interest of Chanhassen.”

Gerhardt has no plans to run for governmental boards or councils. His retirement will allow him and his wife Diane, who retired several years ago as an employment guidance counselor for Carver County, to spend more time with hobbies, travel and family.

“I just felt it was the right time to leave when things are going so well,” he said. “I will miss a lot of this, but the city is in very capable hands.”

When asked what advice he would give to the new city manager, Gerhardt replied: “Be a good listener and don’t be afraid to try new things.”

Scott and Carver counties are the fastest-growing in Minnesota, according to recent census estimates.

A number of demographic factors, including birth rates, death rates and migration rates contribute to county population estimates, which are then apportioned to individual communities.

This year, among Minnesota’s 87 counties, Carver and Scott counties showed the highest rates of population growth, said State Demographic Analyst Jim Hibbs. This ranks Carver as the 11th largest county in the state, and Scott the ninth.

The Met Council’s 2019 growth estimates for the southwest metro reflect the same general trends found by the U.S. Census Bureau. Carver and Scott counties have gained a combined 34,667 residents since 2010, said Communications Director Bonnie Kollodge — a growth rate of about 16%.

Development of previously unused land, or greenfield development, is a key factor in the region’s population expansion, Kollodge said. Both counties also have strong agricultural protection policies which promote growth within their cities.

“Except for Shakopee, all of these cities are adding new housing more quickly than the region — especially Carver and Victoria,” said Kollodge. “About 25% of Carver’s housing stock, and 29% of Victoria’s housing stock, has been built since 2010.”

“Chaska and Jordan have not built as much new housing as most of the other cities, but vacancy rates have fallen, and many units that were vacant in 2010 are now occupied,” Kollodge said.

Population estimates from the U.S. Census Bureau released in May are: 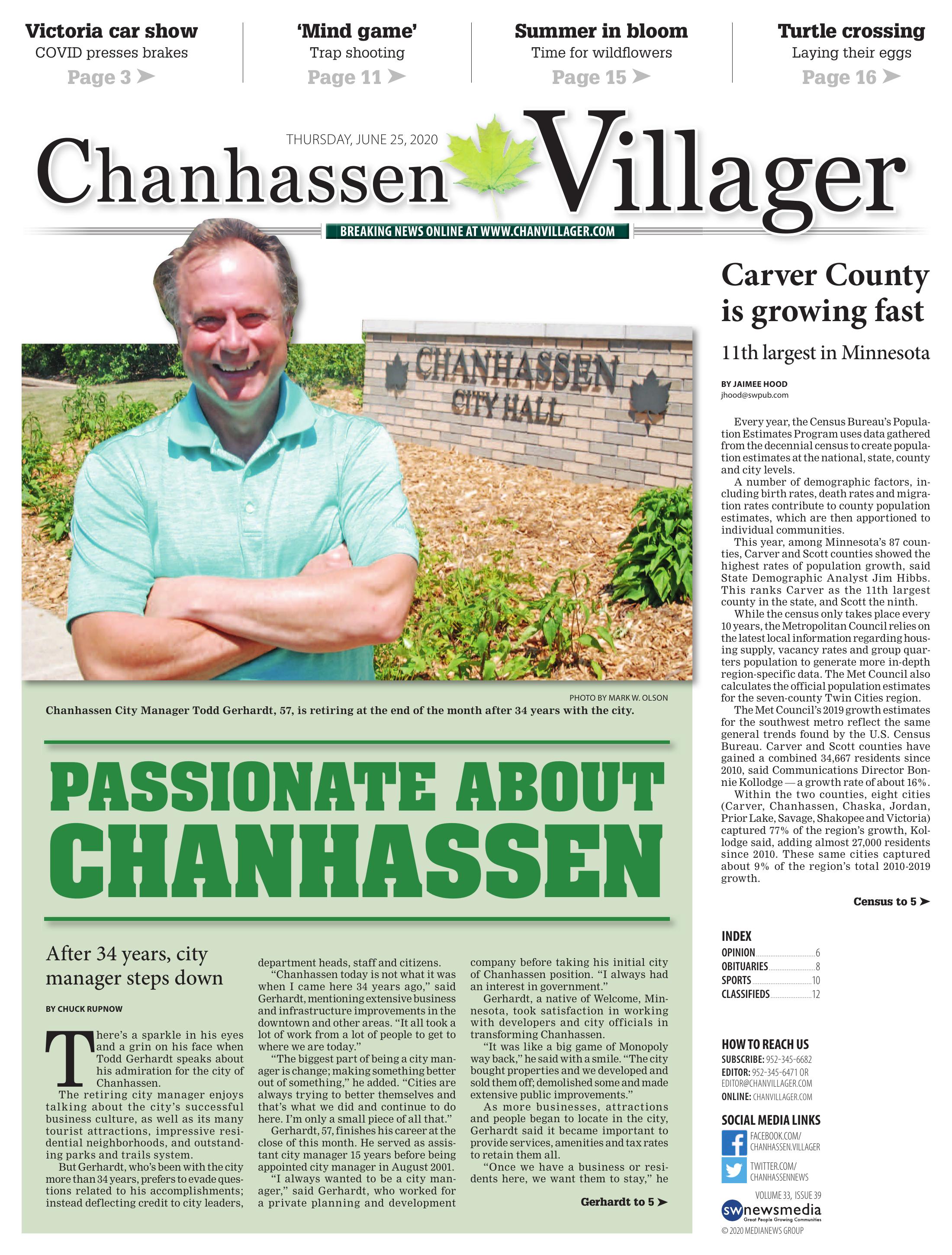