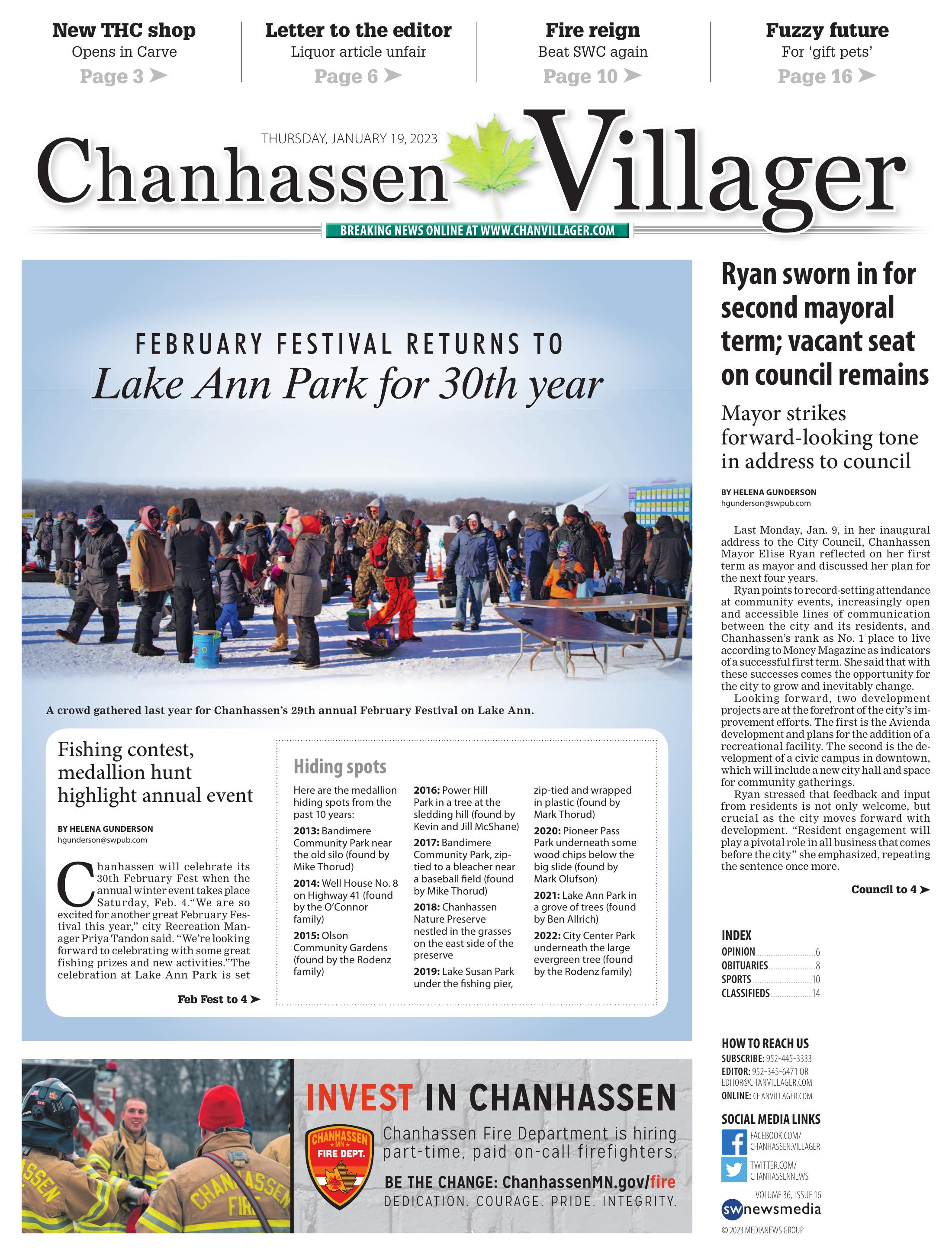 Chanhassen will celebrate its 30th February Fest when the annual winter event takes place Saturday, Feb. 4.“We are so excited for another great February Festival this year,” city Recreation Manager Priya Tandon said. “We’re looking forward to celebrating with some great fishing prizes and new activities.”The celebration at Lake Ann Park is set to start at noon with the ice fishing contest starting at 1 p.m. Competitors who manage to catch one of the day’s top 50 heaviest fish will receive a prize. From fishing equipment to dinner for two at the Chanhassen Dinner Theater, over $6,000 in prizes are up for grabs.

In addition, there will be free ice fishing and kicksled demos for kids. Other activities including hayrides and ice skating, as well as food and beverages provided by the Chanhassen Rotary Club, will be available for purchase.

“The Rotary Club of Chanhassen, for many years, has drilled holes and provided concessions for the Feb Fest and it’s one of our favorite activities,” said Ruth Lunde, the programs chair of the Chanhassen Rotary Club.

Although the official celebration isn’t until the first Saturday of February, the festivities will kick off on Monday, Jan. 30, with the reveal of the first clue in the FebFest Medallion Hunt. Clues will be posted on the city website every morning at 9 a.m. They will also be posted on the door of Nicolet National Bank, the sponsor of this year’s medallion hunt. Clues will be released until Friday or until the medallion is found. The winning prize package is valued at over $500.

The medallion will be hidden in a Chanhassen city owned park. Past hiding spots have run the gamut, and some friendly competition has developed as residents vie for the prize bundle and the chance to put another notch on their medallion-finding belts.

A complete list of hunt rules is available on the Medallion Hunt page of the Chanhassen city website.

Here are the medallion hiding spots from the past 10 years:

2016: Power Hill Park in a tree at the sledding hill (found by Kevin and Jill McShane)

2017: Bandimere Community Park, zip-tied to a bleacher near a baseball field (found by Mike Thorud)

2018: Chanhassen Nature Preserve nestled in the grasses on the east side of the preserve

2019: Lake Susan Park under the fishing pier, zip-tied and wrapped in plastic (found by Mark Thorud)

2020: Pioneer Pass Park underneath some wood chips below the big slide (found by Mark Olufson)

2022: City Center Park underneath the large evergreen tree (found by the Rodenz family)

Chanhassen Mayor Elise Ryan, in her inaugural address to the city council on Jan. 9, reflected on her first term and discussed her plan for the next four years.

Ryan, who ran unopposed in November, points to record-setting attendance at community events, increasingly open and accessible lines of communication between the city and its residents, and Chanhassen's Money Magazine rank as the top place to live in the country as indicators of a successful first term. She said that with these successes comes the opportunity for the city to grow and inevitably change.

Looking forward, two development projects are at the forefront of the city's improvement efforts. The first is the Avienda development and plans for the addition of a recreational facility. The second is the development of a civic campus in downtown, which will include a new city hall and space for community gatherings.

Ryan stressed that feedback and input from residents is not only welcome, but crucial as the city moves forward with development. "Resident engagement will play a pivotal role in all business that comes before the city" she emphasized, repeating the sentence once more.

The council, to which Ryan gave her address, is currently short one councilperson, and interviews for this role were set to be conducted Wednesday, Jan. 18. Of the 11 candidates who applied to fill the vacant seat, four were slated to be interviewed.

Here are the candidates set to be interviewed:

Kelsey Alto: Alto is a member of the Chanhassen Planning Commission and the Park Referendum Task Force. She currently works at Salesforce, doing program management and business operations.

Luke Bame: Bame is the director of strategic partnerships at Lube Tech.

Mark Randall: Randall is a former Carver County Sheriff's deputy, as well as a member of the Chanhassen Planning Commission from 2016 to 2021.

The selected candidate is expected to be sworn in at the Jan. 23 city council meeting.