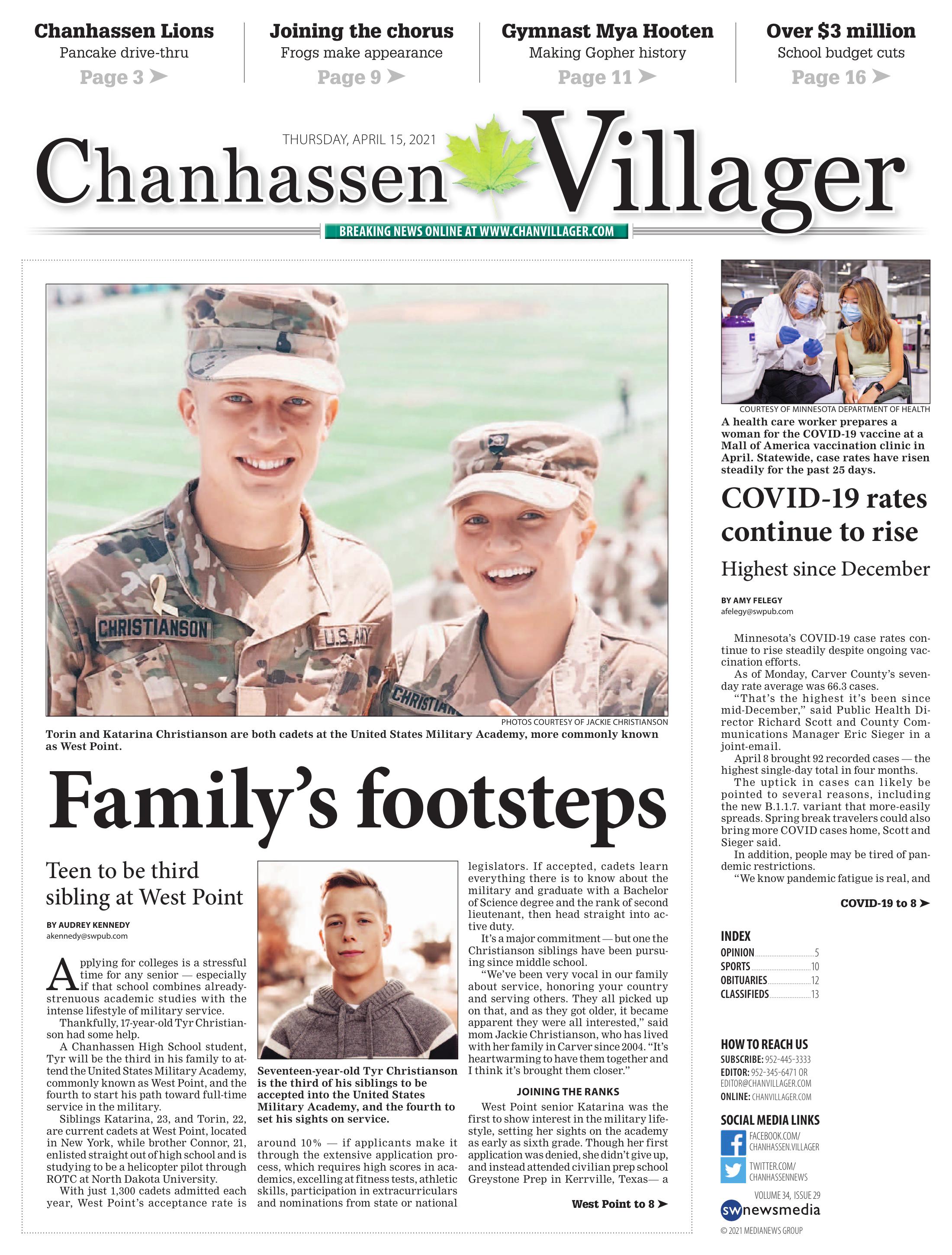 Torin and Katarina Christianson are both cadets at the United States Military Academy, more commonly known as West Point.

Torin and Katarina Christianson are both cadets at the United States Military Academy, more commonly known as West Point.

Seventeen-year-old Tyr Christianson is the third of his siblings to be accepted into the United States Military Academy, and the fourth to set his sights on service.

Applying for colleges is a stressful time for any senior — especially if that school combines already-strenuous academic studies with the intense lifestyle of military service.

A Chanhassen High School student, Tyr will be the third in his family to attend the United States Military Academy, commonly known as West Point, and the fourth to start his path toward full-time service in the military.

Siblings Katarina, 23, and Torin, 22, are current cadets at West Point, located in New York, while brother Connor, 21, enlisted straight out of high school and is studying to be a helicopter pilot through ROTC at North Dakota University.

With just 1,300 cadets admitted each year, West Point’s acceptance rate is around 10% — if applicants make it through the extensive application process, which requires high scores in academics, excelling at fitness tests, athletic skills, participation in extracurriculars and nominations from state or national legislators. If accepted, cadets learn everything there is to know about the military and graduate with a Bachelor of Science degree and the rank of second lieutenant, then head straight into active duty.

It’s a major commitment — but one the Christianson siblings have been pursuing since middle school.

“We’ve been very vocal in our family about service, honoring your country and serving others. They all picked up on that, and as they got older, it became apparent they were all interested,” said mom Jackie Christianson, who has lived with her family in Carver since 2004. “It’s heartwarming to have them together and I think it’s brought them closer.”

West Point senior Katarina was the first to show interest in the military lifestyle, setting her sights on the academy as early as sixth grade. Though her first application was denied, she didn’t give up, and instead attended civilian prep school Greystone Prep in Kerrville, Texas— a rigorous post-high school academic program designed for applicants for the U.S. Military academies.

“I was in the gym when I got the call I was accepted after my second application, and ran the half a mile back to the prep school to tell my best friend. We were hugging and screaming in the parking lot,” Katarina said. “Persistence paid off.”

For Torin, who excelled in track and cross country at Chanhassen High School and was recruited by Division 1 schools, West Point reached out to him directly. He also committed to United States Military Academy Preparatory School, sometimes referred to as West Point Prep, before being accepted to West Point in 2020.

By the time both Katarina and Torin were confirmed, Tyr was set on following in their footsteps. With a resume that included years of cross country and lacrosse, including stints as team captains, participation in student council and volunteer organizations and high academic scores, he earned two nominations from Sen. Amy Klobuchar, two from Sen. Tina Smith and one from Rep. Tom Emmer, and was accepted into the academy on his first try.

“I thought I had pretty good chances of getting in, but seeing [the acceptance] on the online portal was such a cool experience,” Tyr said.

Though there are over 4,200 students on campus, West Point cadets all live on site, eat breakfast and lunch together and take the same classes their freshman year before declaring their major. Katarina, who is also class president, is studying defense and strategic studies, while Torin is currently declared as sociology (though he’s contemplating switching).

Katarina compared having a sibling so close in such an intense program to being a part of a TV show — if you watch it, you get the jokes, the phrases and the different things that make West Point such a unique experience.

“We have nicknames for things, acronyms and such that others might not know. It’s cool to have somebody here that understands exactly what I’m talking about all the time,” she said.

Cadets are still full-time students, while also balancing military education, physical education and extracurriculars. All must abide by the Honor Code: “A cadet will not lie, cheat, steal, or tolerate those who do.”

Keeping your class rank high is vital, as it determines the order graduates can choose their active-duty assignments. Katarina, who graduates in May, was able to get her pick: heading to Fort Benning, Georgia, for the Basic Officer Leaders Course — which teaches new grads how to do their jobs as a second lieutenant in their branch — then post to Fort Stewart, Georgia to work with tanks.

Tyr will fly to New York in June to start basic: an intense weeks-long training where cadets learn everything from general military protocol to extremely physical outdoor activities. From there, he’ll begin the West Point curriculum (he’s contemplating a major related to engineering), with Torin just a few buildings away.

Though Katarina will have moved away by the time Tyr starts, she and Torin have been preparing Tyr for his first year: filling him in on common terms, answering questions about basic and providing support.

“Torin said Katarina being there has helped him a lot, and I think it’ll be the same thing for me. We can help each other out with whatever’s going on, and if there’s a problem, you can go hang out with the other sibling, vent and make things better,” Tyr said.

As her youngest prepares to join his siblings in the military lifestyle, Jackie said she’s extremely proud of her children — but still, it’s scary.

“The apprehension of not knowing if they’re going to end up in a battle, or overseas in a war ... it is really scary. And it’s all of them,” she said. “No matter where they end up, we’re going to be there for them. I’m most proud of the fact that they understand who they are, and they’re proud to stand and say it.”

There are things Tyr will miss: sleeping in, family and friends back home. But he’ll be with his brother again, on a beautiful campus and will meet new people with the same interests and motivations.

Most of all, he’ll build his own character, and see how he’ll grow over these four years and beyond.

“I’m kind of worried about doing things wrong, but it’s West Point. It’s going to happen,” Tyr said. “They’re going to push you until you fail, but it’s what you do when you fail that defines who you are.”

As of Monday, Carver County's seven-day rate average was 66.3 cases.

"That's the highest it's been since mid-December," said Public Health Director Richard Scott and County Communications Manager Eric Sieger in a joint-email.

The uptick in cases can likely be pointed to several reasons, including the new B.1.1.7. variant that more-easily spreads. Spring break travelers could also bring more COVID cases home, Scott and Sieger said.

In addition, people may be tired of pandemic restrictions.

"We know pandemic fatigue is real, and residents are struggling to maintain the same level of vigilance with mitigation strategies, especially around social gatherings," they said.

As of April 6, the state health department reported 497 Minnesotans were in the hospital being treated for COVID-19, with 114 in the intensive care unit.

COVID-19 related hospital bed usage was up by 40% within 10 days, Malcolm said.

Distance learning for all students is recommended with 14-day case rates higher than 50 cases per 10,000 residents, according to MDH guidelines.

On April 9, nine schools in Carver County were listed as follows:

A total of 159 schools are listed statewide.

To curb variant spread, MDH is recommending all school-age youth and their families be tested for COVID-19 every two weeks through the end of the school year. Youth involved in any extracurricular activities or sports should be tested weekly, guidance states.

Scott and Sieger said Carver County's vaccination rates are "very comparable" to other metro counties, and "even superior" when comparing rates for people older than 65. But the fight isn't over and people still need to wear masks, stay apart, and get vaccinated when they can, they said.

"This is a race against time to get as many residents vaccinated before we see another surge," Scott and Sieger said. "We’re optimistic we can win this race, but we need residents to continue practicing those key mitigation tactics."