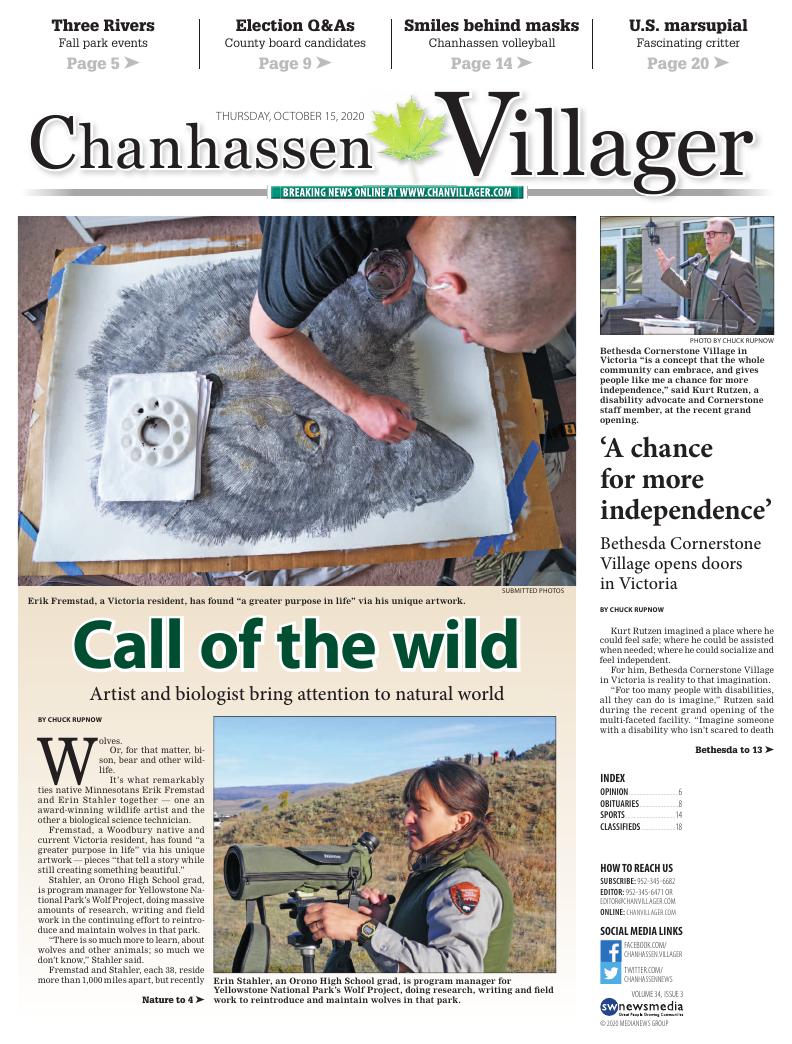 Local
top story
Call of the wild: Bringing attention to the natural world
By Chuck Rupnow

Erik Fremstad, a Victoria resident, has found “a greater purpose in life” via his unique artwork.

Erik Fremstad and some of his artwork.

Or, for that matter, bison, bear and other wildlife.

It’s what remarkably ties native Minnesotans Erik Fremstad and Erin Stahler together — one an award-winning wildlife artist and the other a biological science technician.

Fremstad, a Woodbury native and current Victoria resident, has found “a greater purpose in life” via his unique artwork — pieces “that tell a story while still creating something beautiful.”

Stahler, an Orono High School grad, is program manager for Yellowstone National Park’s Wolf Project, doing massive amounts of research, writing and field work in the continuing effort to reintroduce and maintain wolves in that park.

“There is so much more to learn, about wolves and other animals; so much we don’t know,” Stahler said.

Fremstad and Stahler, each 38, reside more than 1,000 miles apart, but recently spoke independently about wolf populations, relevance and dangers; their history, resurgence and value.

Fremstad has used his communications degree in a variety of areas, including television editing, which he says spearheaded his interest in nature-based photography.

“That photography led me to engage with nature in a meaningful way, a way that I felt I could bring more attention to important issues,” he said, noting mortality as one vital issue.

Fremstad’s nature and wildlife pieces are impressive from a distance, but a closer look reveals so much more — a message that hopefully leads to greater interest and discussion about wildlife.

Several years ago, Fremstad considered creating artwork where the lines of his drawings were actually words; words which told the history and importance of wildlife, such as bear, wolves and bison.

At a distance, viewers see an impressive piece of art. Up close, they recognize that the wolf, bison and bear — and next the rusty patched bumble bee, sea turtle and polar bear — are designed by thousands of words; words that describe their history and episodes of endangerment.

“The stories that these faces tell is not pretty; I mean, animals being slaughtered by the thousands,” Fremstad said. “From a distance, I hear people say, ‘Oh, what a beautiful painting.’ But then, when they get up close and read it, they go, ‘Oh, my gosh, there is so much depth to it.’ The image pulls you into being more interested in it.”

Fremstad spends months on research, filling notebooks with historical data to be used in creating the outline of his works. In his efforts, he writes how an estimated 30 million bison were killed, as were about two million wolves.

Once he believes he has enough information about each subject animal, he uses a pencil to “write” the outline of his artwork.

“There is a lot of erasing that goes on, which is why the pencil works best,” he said with a chuckle, emphasizing that he wants his work to be accurate and attractive. “I stay at this because there is something within me that wants to create things that are important to me; things which I have a connection to.”

Once the outline is complete, he goes over the words with an archival pen and then water colors — a process that takes about three months. In all, it may take a year to complete one project which measures about 29x40 inches.

Fremstad has received “tremendous support” from his wife, Paige Thiesse, as well as naturalist and conservationist groups. He donates a portion of his profits from limited edition prints to those groups.

“It’s nice to get the accolades, but the project doesn’t have nearly as much value if it’s only for my benefit,” he said.

“I saw it online and I was amazed,” said Trevor Bielkamp of Victoria, who added that he and his family voted for Fremstad’s exhibit. “After seeing it and reading some of the words and accounts, our family did our own research on it too. I never thought we would get so many facts from an art exhibit.”

BRINGING BACK THE WOLVES

For Stahler, the Wolf Project is one way of restoring the ecosystem in Yellowstone.

“If you want to restore Yellowstone, you have to bring back the wolves,” she said. “They were eliminated by people and bringing them back, where they are a top predator, is making it the way it should be again.”

Stahler, whose husband Dan Stahler is a wildlife biologist at Yellowstone, first imagined being a veterinarian, “but after many chemistry classes, that just wasn’t going to happen.”

She became interested in wildlife biology and spent time learning and working at the International Wolf Center in Ely, Minnesota, and Superior National Forest before she applied for, and was granted, the opportunity to work with an elk mortality study in Yellowstone.

That eventually led to her involvement with the effort since the mid-1990s to reintroduce wolves into the park. Stahler manages massive amounts of data on wolves’ behavior, including location, survival and breeding. For example, data has revealed the black color coat is a dominant trait, which leads to question about immune systems.

Stahler says animal capture, including wolves, bear, cougar, bison and bighorn sheep, “has kind of become my specialty,” adding that her duties include everything from coordinating helicopters to procuring immobilization drugs, all within proper safety protocols.

“Every day can be unpredictable,” she said, noting that she can be involved with everything from animal capture in remote areas of the park to dealing with elk with garbage can or Christmas lights complications.

But it’s the wolves that garner most of her attention, aside from her husband and their 6-year-old son, Rocco.

Before their reintroduction, the last wolf in Yellowstone was killed in 1926. Several attempts to reintroduce them failed, in part because they were mistaken for coyotes and killed. Reintroduction was necessitated because of an elk herd that flourished without the wolves.

“The wolves were eliminated by people, so the plan was to bring them back so they can do what they do best, hunt elk, which is helpful for the ecosystem,” Stahler said.

So, on a cool mid-September morning, Stahler and others who track wolves, located a pack of about 18 in a meadow along a riverbed. Only those with field scopes or long camera lenses could spot the group, except for one lone black wolf which wandered off. There were plenty of wildlife photographers on hand to witness it all.

“The wolves have brought so many more photographers and other wildlife enthusiasts to the park,” Stahler said. “Wolf watching brings millions of dollars into the economy. There are those who love the wolves and those who do not, but for the park, they are a necessity and a very complicated, social animal.” 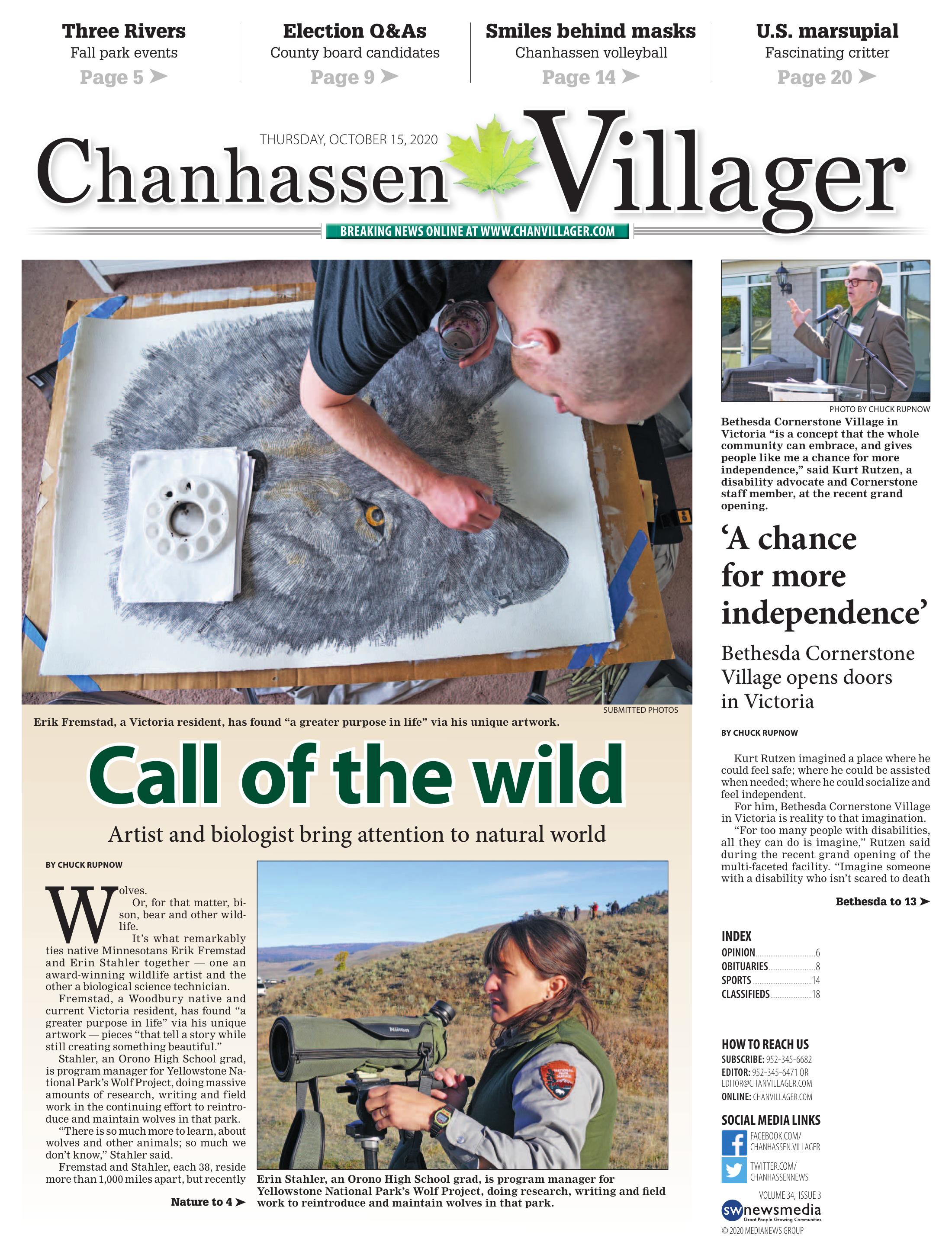