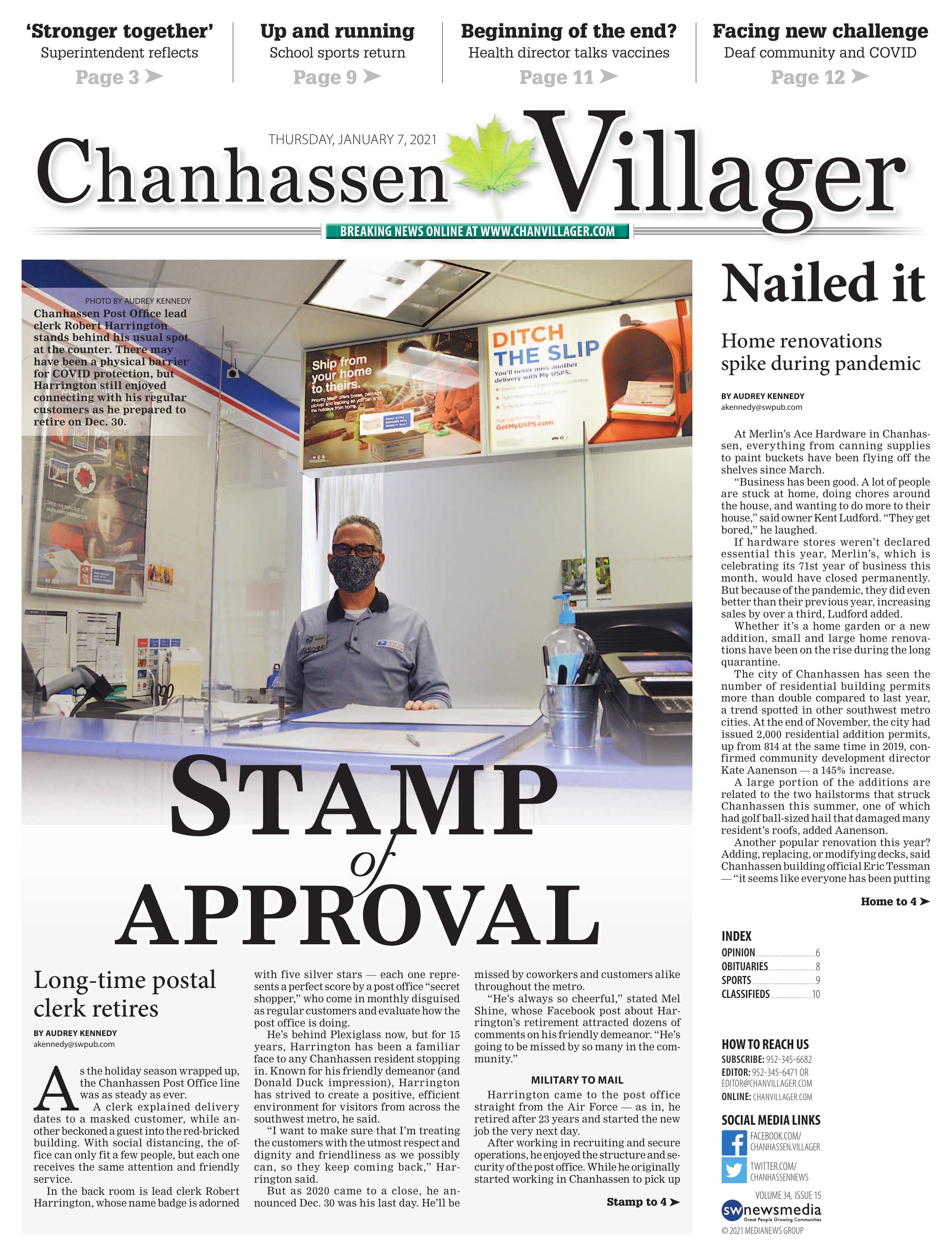 Chanhassen Post Office lead clerk Robert Harrington stands behind his usual spot at the counter. There may be a physical barrier for COVID protection, but Harrington still enjoys connecting with his regular customers as he prepares to retire on Dec. 30.

As the holiday season wrapped up, the Chanhassen Post Office line was as steady as ever.

A clerk explained delivery dates to a masked customer, while another beckoned a guest into the red-bricked building. With social distancing, the office can only fit a few people, but each one receives the same attention and friendly service.

In the back room is lead clerk Robert Harrington, whose name badge is adorned with five silver stars — each one represents a perfect score by a post office “secret shopper," who come in monthly disguised as regular customers and evaluate how the post office is doing.

He’s behind Plexiglass now, but for 15 years, Harrington has been a familiar face to any Chanhassen resident stopping in. Known for his friendly demeanor (and Donald Duck impression), Harrington has strived to create a positive, efficient environment for visitors from across the southwest metro, he said.

“I want to make sure that I'm treating the customers with the utmost respect and dignity and friendliness as we possibly can, so they keep coming back,” Harrington said.

But as 2020 came to a close, he announced Dec. 30 was his last day. He’ll be missed by coworkers and customers alike throughout the metro.

“He’s always so cheerful,” stated Mel Shine, whose Facebook post about Harrington’s retirement attracted dozens of comments on his friendly demeanor. “He’s going to be missed by so many in the community.”

Harrington came to the post office straight from the Air Force — as in, he retired after 23 years and started the new job the very next day.

After working in recruiting and secure operations, he enjoyed the structure and security of the post office. While he originally started working in Chanhassen to pick up more hours, Harrington put in a full-time transfer because he liked the people and the environment, he said.

The lead clerk has worn a few hats in the last 16 years (15 of those in Chanhassen). When he was a supervisor at the postal annex, he worked with around 60 city and rural carriers. On the side, he’s a regional trainer for the northland districts, which covers 30 different clerks throughout the metro and beyond.

His main role, which he’s held for eight years, has him responsible for the day-to-day operations — ensuring all documents are in order, boxes and stamps are available, dealing with concerns, complaints and overall surroundings, he said.

“I want to lead by example,” Harrington said. “The environment I try to create up here is positive, making it a fun experience for the customer. When they come in, they know we’re knowledgeable, efficient and friendly.”

Efficiency has been key with the holiday rush. People are often lined up outside before opening and customers remain steady throughout the day. The volume of packages has definitely picked up over the season — “at the end of the day, you feel like you’ve won a couple of rounds with Mike Tyson,” Harrington laughed.

Still, the post office often sees visitors from nearby towns because of their positive service, Harrington added.

“I want to make sure that I’m treating the customers with the utmost respect and dignity and friendliness as we possibly can, so they keep coming back,” he said.

Over the last decade and a half, Harrington has seen Chanhassen grow “tremendously.”

“We’re constantly adding routes as the area expands,” he said. “Once we became one of the top 10 cities to live in, in Minnesota, everybody started popping up this way. We’re now responsible for Chanhassen, Chaska, Excelsior and Victoria.”

Since he joined the post office, they’ve added six new routes: one route equals 200-350 houses. As the area grew, so did his customer base — his favorite part of the job.

Harrington has known some of his customers for over a decade. He’s entertained the kids with his impressions, watched families grow from grade school to college and become part of their lives, he said. A difficult part of the pandemic is not being able to see the customer’s smiles.

He’s leaving his job for Brainerd, where his wife recently bought a house. If there’s any spots open at their local post office, he’ll head there, he said — but if not, he’ll fully retire.

“It’s kind of a mix of emotions, you know? It was a great chapter of my life, but I’m sad to walk away from the customers I’ve become proud to know over the years. It’s challenging at times, of course, but if you come at it with a positive attitude, you can accomplish anything you try.”

At Merlin’s Ace Hardware in Chanhassen, everything from canning supplies to paint buckets have been flying off the shelves since March.

“Business has been good. A lot of people are stuck at home, doing chores around the house, and wanting to do more to their house,” said owner Kent Ludford. “They get bored,” he laughed.

If hardware stores weren’t declared essential this year, Merlin’s, which is celebrating its 71st year of business this month, would have closed permanently. But because of the pandemic, they did even better than their previous year, increasing sales by over a third, Ludford added.

Whether it’s a home garden or a new addition, small and large home renovations have been on the rise during the long quarantine.

The city of Chanhassen has seen the number of residential building permits more than double compared to last year, a trend spotted in other southwest metro cities. At the end of November, the city had issued 2,000 residential addition permits, up from 814 at the same time in 2019, confirmed community development director Kate Aanenson — a 145% increase.

A large portion of the additions are related to the two hailstorms that struck Chanhassen this summer, one of which had golf ball-sized hail that damaged many resident’s roofs, added Aanenson.

Another popular renovation this year? Adding, replacing, or modifying decks, said Chanhassen building official Eric Tessman — “it seems like everyone has been putting one out,” he said.

Though numbers have increased, the city has been able to keep up with the demand, Tessman said. Typical permit turnaround has remained steady at 5-10 business days. The biggest difference is how the inspections work; instead of in-person walkthroughs, the city has had residents video calling inspectors.

“We’ll FaceTime them and have them walk through the house, and we tell them things we want to see or look at closer,” Tessman explained.

Interest has spiked, but supply chains have still had issues throughout the pandemic, Ludford said. If even just one part of the process is delayed, everything slows down, leaving some shelves empty for weeks. Ten months in, Merlin’s been able to get most of what residents want and need.