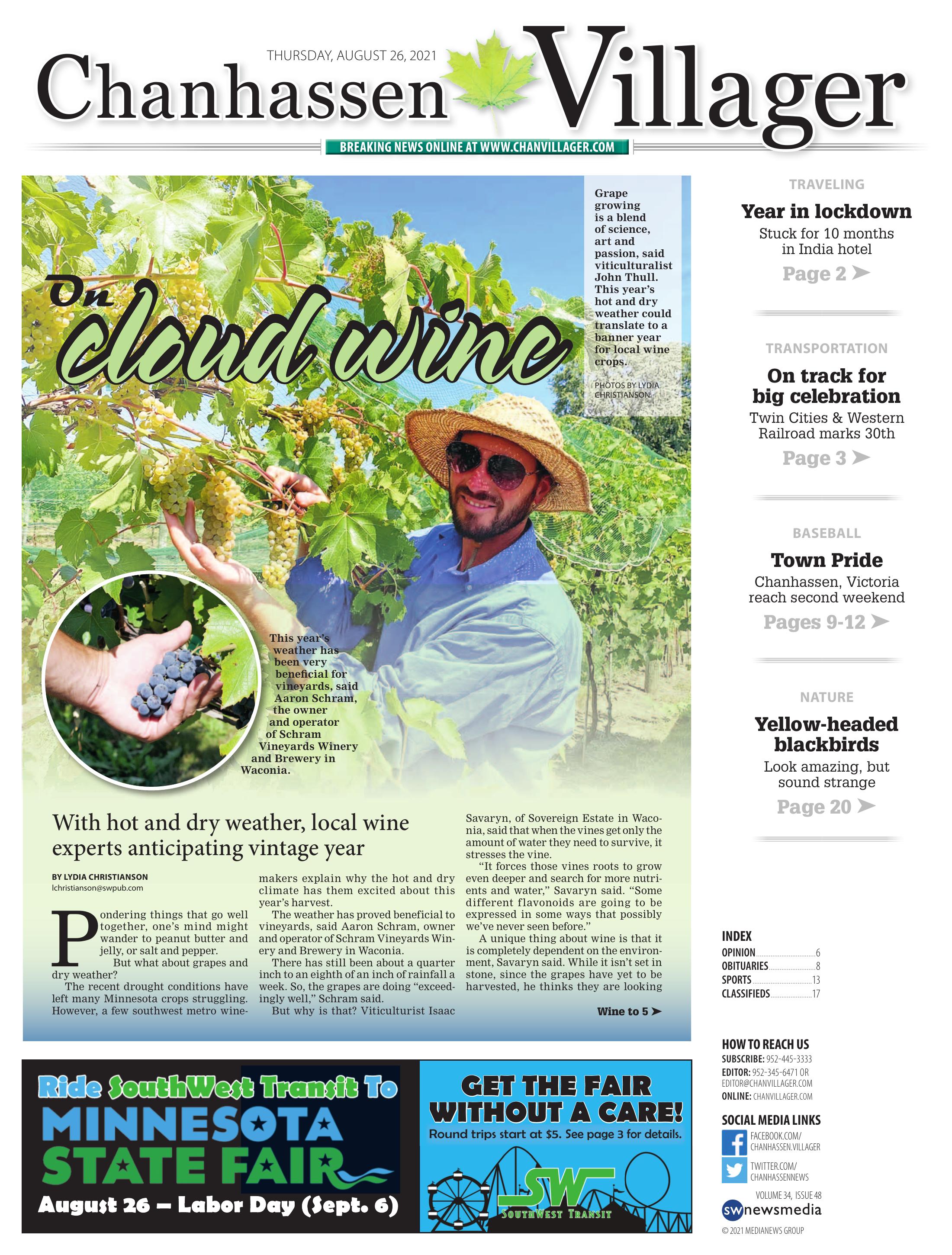 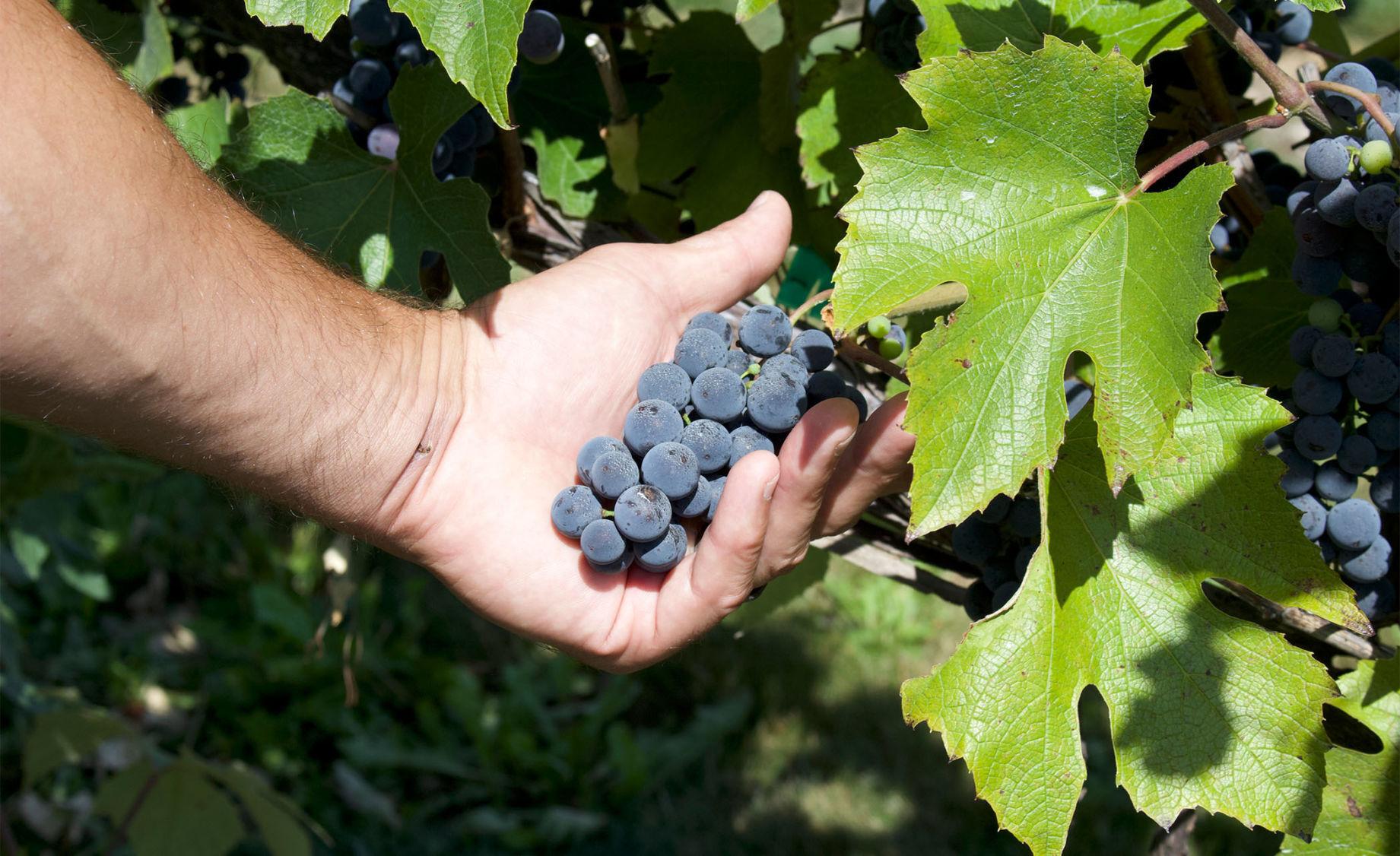 This year’s weather has been very beneficial for vineyards, said Aaron Schram, the owner and operator of Schram Vineyards Winery and Brewery in Waconia.

Pondering things that go well together, one's mind might wander to peanut butter and jelly, or salt and pepper.

But what about grapes and dry weather?

The recent drought conditions have left many Minnesota crops struggling. However, a few southwest metro winemakers explain why the hot and dry climate has them excited about this year’s harvest.

The weather has proved beneficial to vineyards, said Aaron Schram, owner and operator of Schram Vineyards Winery and Brewery in Waconia.

There has still been about a quarter inch to an eighth of an inch of rainfall a week. So, the grapes are doing “exceedingly well,” Schram said.

But why is that? Viticulturist Isaac Savaryn, of Sovereign Estate in Waconia, said that when the vines get only the amount of water they need to survive, it stresses the vine.

“It forces those vines roots to grow even deeper and search for more nutrients and water,” Savaryn said. “Some different flavonoids are going to be expressed in some ways that possibly we've never seen before.”

A unique thing about wine is that it is completely dependent on the environment, Savaryn said. While it isn’t set in stone, since the grapes have yet to be harvested, he thinks they are looking at a vintage year, which basically means really good wine.

“Everything has been just absolutely lining up in the way we want it to,” Savaryn said.

PUTTING MINNESOTA ON THE MAP 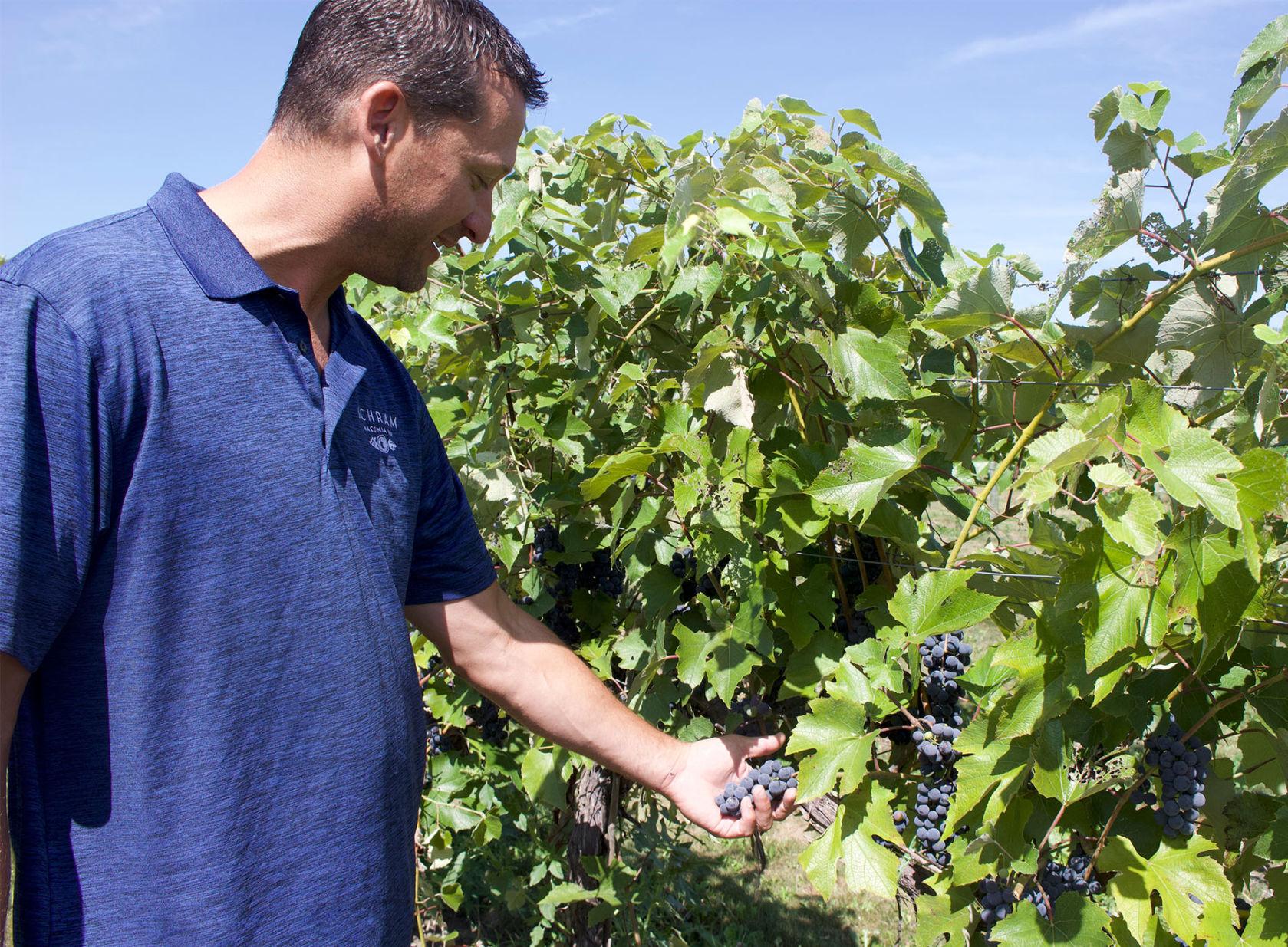 Aaron Schram hopes that Minnesota wine starts to gain some traction and that this year in particular will change the perspective of Minnesota wine as more than just a novelty.

This season’s weather has gotten Schram excited about entering wines for awards and competitions, which could set the bar for Minnesota. Few wineries in the state have won anything that would get noticed by wine critics, he said.

Minnesota is a “micro wine industry” Schram said. He hopes that it starts to gain some traction and that this year in particular, will change the perspective of Minnesota wine as more than just a novelty.

People think of California as a powerhouse in the wine industry, but it wasn’t always that way, Schram explained. While Minnesota isn’t going to be the new Napa, there are wine varieties such as Itasca and Marquette that they need to develop, as well as develop an industry for them.

“This year could be one of the defining years. I hope we break some ground in getting those out into the wine world,” Schram said. 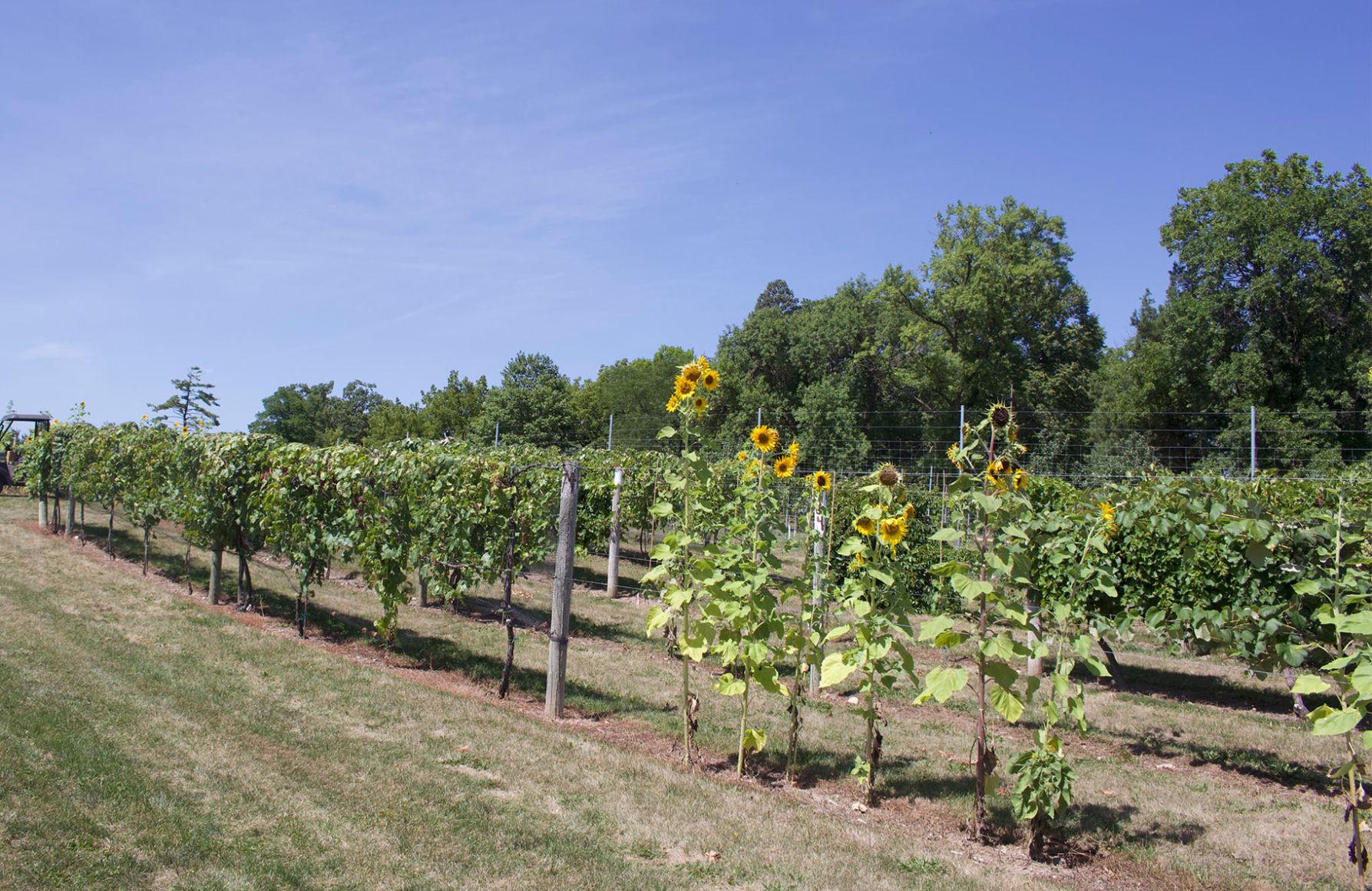 “All of this, aspects of the heat and the drought combined is really coming together nicely for the fruit,” said John Thull, research viticulturist at the Minnesota Landscape Arboretum.

John and Jenny Thull are research viticulturists at the Minnesota Landscape Arboretum.

Every season, there is a finite amount of time to accumulate as much heat as possible, John said. This year, things have been moving more quickly because the heat came earlier. That means the color of the grapes are changing earlier, as is their flavors.

“All of this, aspects of the heat and the drought combined, is really coming together nicely for the fruit,” John said.

Other growers echoed that the heat has sped up the grape growing process. According to Savaryn, the winery is about two weeks ahead of schedule for harvesting. Schram estimates they are about one week ahead. Things are moving faster than he likes, but it’s not so bad that it’s out of control, he said.

Younger vines don’t have as deep of roots as mature vines, so they need to be manually watered, Savaryn said. Schram goes on what he calls “walkabouts” to monitor for signs of leaf shrivel or curling, as well as discolorations. He has watered his young vines around four or five times, he estimated.

The past few years have been wet, so grapes such as the Marquette haven’t had much flavor development, Jenny said. Even when it was ripe, “you just didn’t get much for flavors.” This year, the grape isn’t even quite ripe yet, but there are flavors that developed that she hasn’t tasted since 2012.

“If I were to do this at the same time last year, we wouldn't have been able to even eat it, because the acid would have been high,” Jenny said.

Another benefit to this season’s weather is that there is reduced fungus and disease pressure. Diseases such as downy mildew, black rot and powdery mildew are more easily controlled by the dryness, John said. The Thulls have sprayed only once to combat the diseases. Four to six times a season is fairly typical, he said.

“Less spray is more healthy for us as workers and then ultimately, down the line, for the consumers too,” John said.

But this season isn’t without its drawbacks. The Thulls have anticipated more birds because the worms they typically eat, are too deep in the ground. The birds are looking for something with moisture and nutrients. Grapes are the next best thing, John said.

When it comes to grape growing, it is a balance of all the jobs and the weather, John said, adding it is a perfect blend of science, art and passion that makes great grapes for really good wine.

“These are the kind of years where the vines really do express themselves the best. When it’s dry and when it’s warm you get the best expression out of the fruit and that translates really well into the wines later on,” John said. 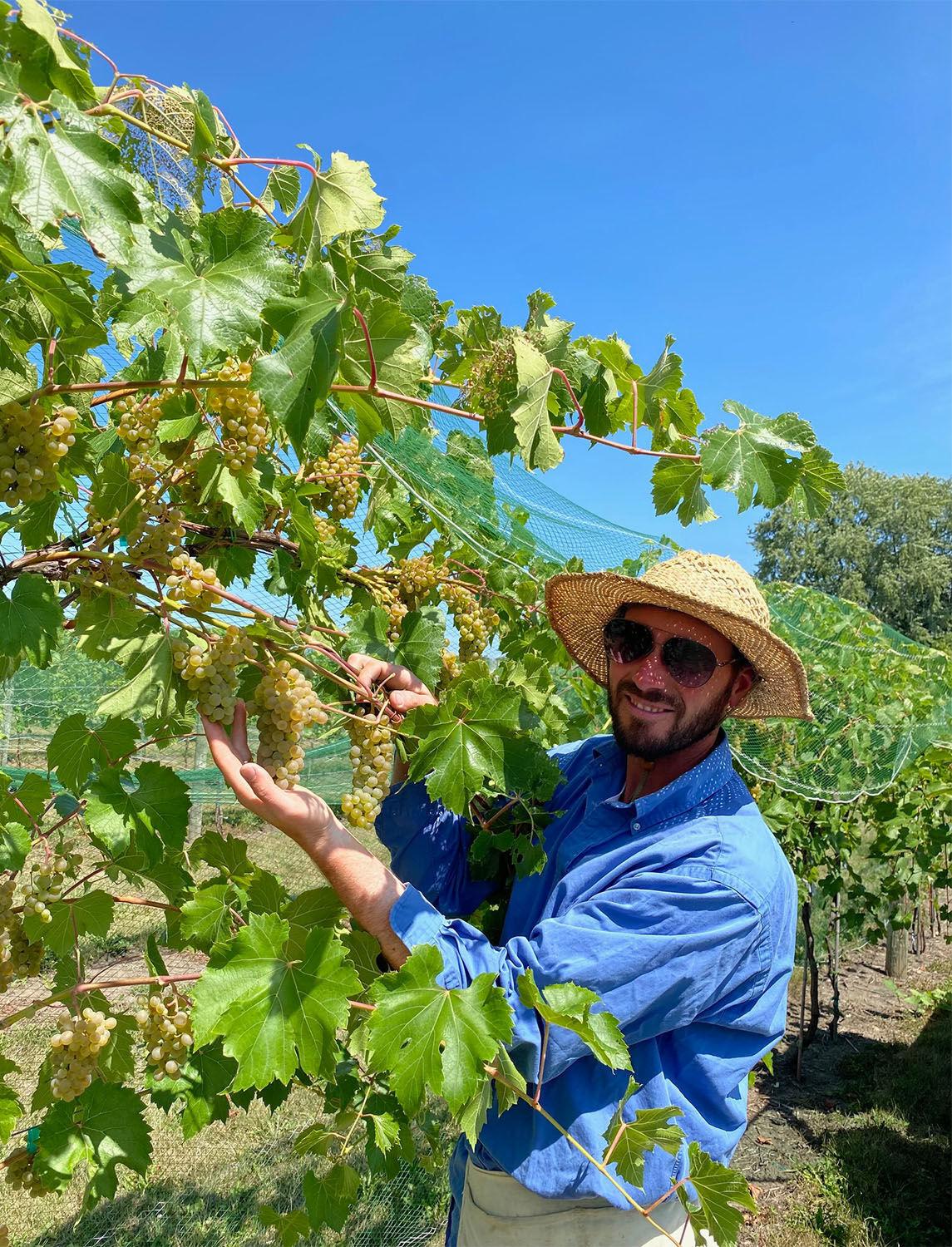 Grape growing is a blend of science, art and passion, said viticulturalist John Thull. This year’s hot and dry weather could translate to a banner year for local wine crops.

Jenny joked that it’s been about nine years since the last time there were conditions like this season. “Every nine years or so, we’re gonna have a great year,” she said with a laugh.