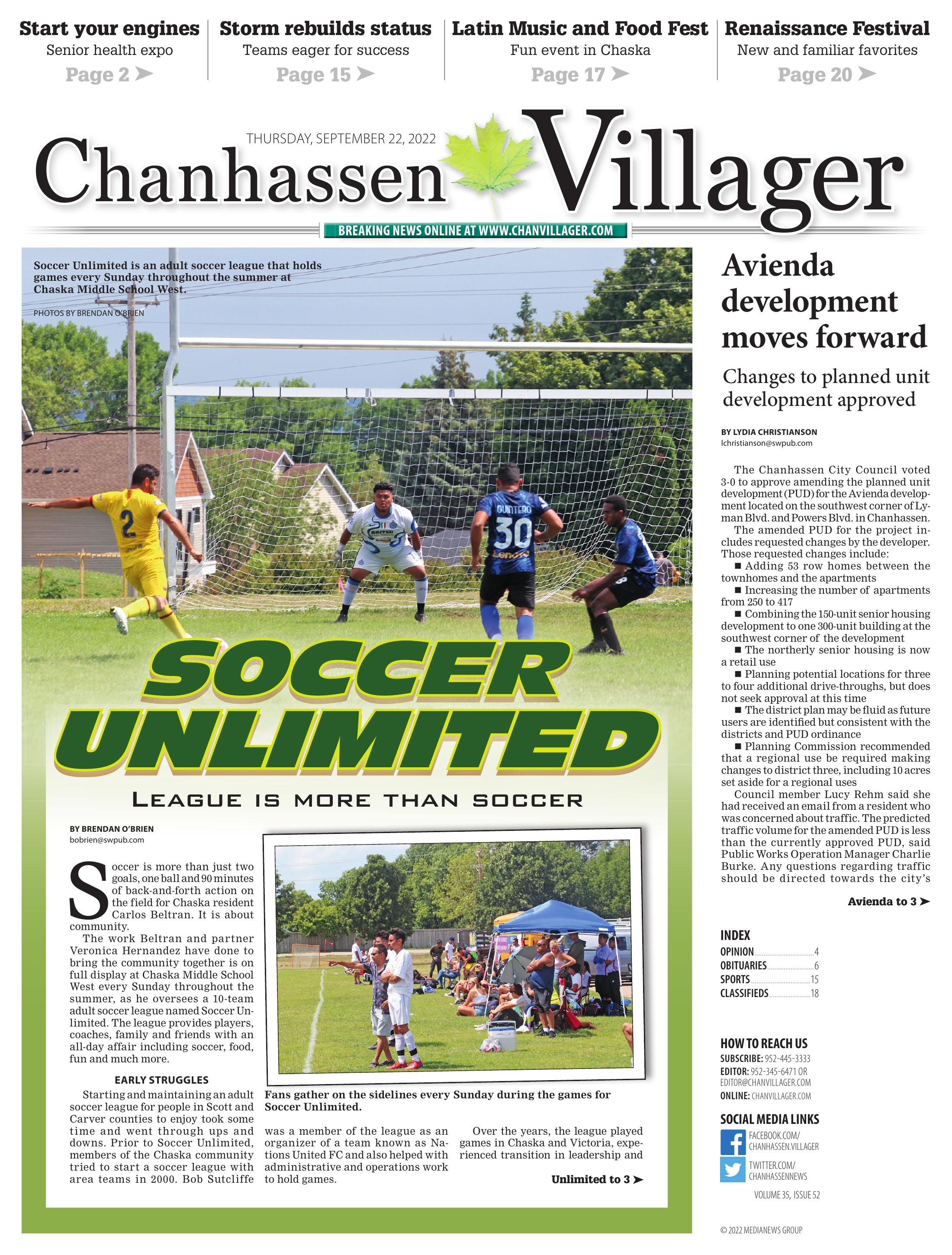 Soccer Unlimited is an adult soccer league that holds games every Sunday throughout the summer at Chaska Middle School West.

Fans gather on the sidelines every Sunday during the games for Soccer Unlimited.

Carlos Beltran (left) has been overseeing Soccer Unlimited since 2006.

10 teams are in the Soccer Unlimited adult league this regular season, with the league championship set for early October.

10 teams are in the Soccer Unlimited adult league this regular season, with the league championship set for early October.

Soccer is more than just two goals, one ball and 90 minutes of back-and-forth action on the field for Chaska resident Carlos Beltran. It is about community.

The work Beltran and partner Veronica Hernandez have done to bring the community together is on full display at Chaska Middle School West every Sunday throughout the summer, as he oversees a 10-team adult soccer league named Soccer Unlimited. The league provides players, coaches, family and friends with an all-day affair including soccer, food, fun and much more.

Starting and maintaining an adult soccer league for people in Scott and Carver counties to enjoy took some time and went through ups and downs. Prior to Soccer Unlimited, members of the Chaska community tried to start a soccer league with area teams in 2000. Bob Sutcliffe was a member of the league as an organizer of a team known as Nations United FC and also helped with administrative and operations work to hold games.

Over the years, the league played games in Chaska and Victoria, experienced transition in leadership and ultimately folded due to passion and altercations getting in the way. Sutcliffe said there were incidents where local officials were called regarding game play and referee calls. The league folded in 2004.

Beltran, however, knew soccer had an important place in the community and had a vision of how to create a successful league. Beltran started Soccer Unlimited back in 2006 with games played primarily in Shakopee and went to Sutcliffe for administrative assistance.

According to Sutcliffe, the atmosphere around this league was different, as Beltran screened teams who wanted to join the league because he wanted players to follow the league rules.

“Carlos was eager, energetic and passionate about creating a soccer league with professional credibility and respect for the players, fans, school district and city,” Sutcliffe said.

The league eventually found its current home at Chaska Middle School West in 2011. Because of Beltran’s tightly run ship, he said the soccer league has been a benefit for the relationship between league participants and local officials like city police or the county sheriff’s office.

Just because the league has not had similar instances that were harmful to past leagues in the area does not mean the passion for the sport is gone.

“They might be family and friends, but when they step on the field and go against each other, that’s gone,” Beltran said.

The league’s primary goal on the field is to provide adults with the opportunity to continue playing soccer. According to Hernandez, 10 teams are involved in Soccer Unlimited this season, but the league has supported 12 or 14 teams in the past.

Some teams and players come from Chaska and Shakopee, but there is one team made up of players from Burnsville and another from Arlington.

Teams consist of an “owner” who organizes the team’s basic needs like roster, uniforms and sometimes even practices during the week. Players have a small period of time at the beginning of the season where they can play for other teams and decide which team they will play for during the remainder of the season.

Dario Balmaceda of Shakopee has played in the league previously but is in his first season as owner and enjoys taking pride in the team. A former player in high school and at Dakota County Technical College, Balmaceda recognizes Beltran’s work to make the league happen every year.

“(Beltran) always works on inclusiveness. It’s not about money, more about passion. It doesn’t feel like a soulless league,” Balmaceda said. “Everyone knows each other. I have friends on most of the teams. It’s kind of a big get-together and we play soccer.”

Members of the Hispanic communities in surrounding cities compete in Soccer Unlimited, but the league is open for anyone to be involved.

“We want to reunite people from different ethnicities and beliefs. Soccer does that, which is very good,” Beltran said.

Games are played every Sunday with the first game starting at 10 a.m. and the last beginning at 5 p.m. The league lasts from June until the championship game which will be held the first or second weekend of October, according to Beltran.

League playoffs lead up to the championship game which has been played numerous times at the soccer-only stadium at Chaska Middle School West.

The league has also had unique opportunities for different matches. Players were able to compete against a select team from Honduras that was filled with former World Cup-level players.

What Beltran has built with Soccer Unlimited is not just an adult sport league but a generational community that provides opportunities larger than soccer. Every Sunday, the sidelines are full of supporters, and many are familiar faces to Beltran.

When the league first started, some players brought their children to watch the games and kick a ball back and forth. As the years have gone by, those who were children are now young adults and play in the games while their fathers are the ones who watch.

Beltran has also been a mentor for some of the league’s younger players. As he has gotten to know different players, he has connected them with different people who could be beneficial to their everyday career and acted as a reference for applications.

“It’s a passion to be on the field and a good vehicle for many other things,” Beltran said. “It’s been great all the way around, but what it does is it brings us all together.”

Despite being the league’s president, Beltran said operating the league could not be done without the help of Hernandez, Sutcliffe, his team of professional referees and the people who play and support the league on the sidelines.

“Everyone does their part to make this thing happen,” Beltran said.

At the end of the final match for the day, Beltran and anyone else who is still around will clean up the field to leave it better than how they found it. And while the games are completed for another week, the league’s impact lasts for much longer.

A rendering of the central plaza in the Avienda development.

An updated map of the Avienda development.

The Chanhassen City Council voted 3-0 to approve amending the planned unit development (PUD) for the Avienda development located on the southwest corner of Lyman Blvd. and Powers Blvd. in Chanhassen.

Council member Lucy Rehm said she had received an email from a resident who was concerned about traffic. The predicted traffic volume for the amended PUD is less than the currently approved PUD, said Public Works Operation Manager Charlie Burke. Any questions regarding traffic should be directed towards the city's engineering department, he added.

“We're excited to be continuing to move this forward although I know from the outside it can seem like it's moving slowly,” said Mark Nordland, representing Avienda developer Level 7 Development.

Nordland also addressed the plans for an entertainment space. The developer is proposing a large scale plaza in the center of the development. The plaza would be surrounded by restaurants and other entertainment spaces and would have regular programing.

The developer is discussing a potential partnership with the city to create a larger recreation facility in the southeast corner of the project, Nordland said. Adding something like that would create a significant regional draw, he added.

“The desire is to really have that regional draw,” Mayor Elise Ryan said. “We're really looking forward to working with you to… identify kind of that regional, something that's unique to Chanhassen that is going to bring people into Chanhassen.”

The amended PUD incorporates more housing. According to Nordland, the plan previously had more retail space. However, the way people receive goods and services has changed, especially since the pandemic. The amended PUD reflects what the market demands, he said.

There was no public hearing scheduled for the meeting. However, Ryan opened the meeting up for comments and questions. No one from the public spoke at the meeting.

At its Aug. 16 meeting, the Chanhassen Planning Commission unanimously recommended the City Council amend the PUD for the Avienda housing development project, including the requested changes by the developer.

The updated Avienda development plan was also presented to the community through a well-attended neighborhood meeting on Aug. 11.