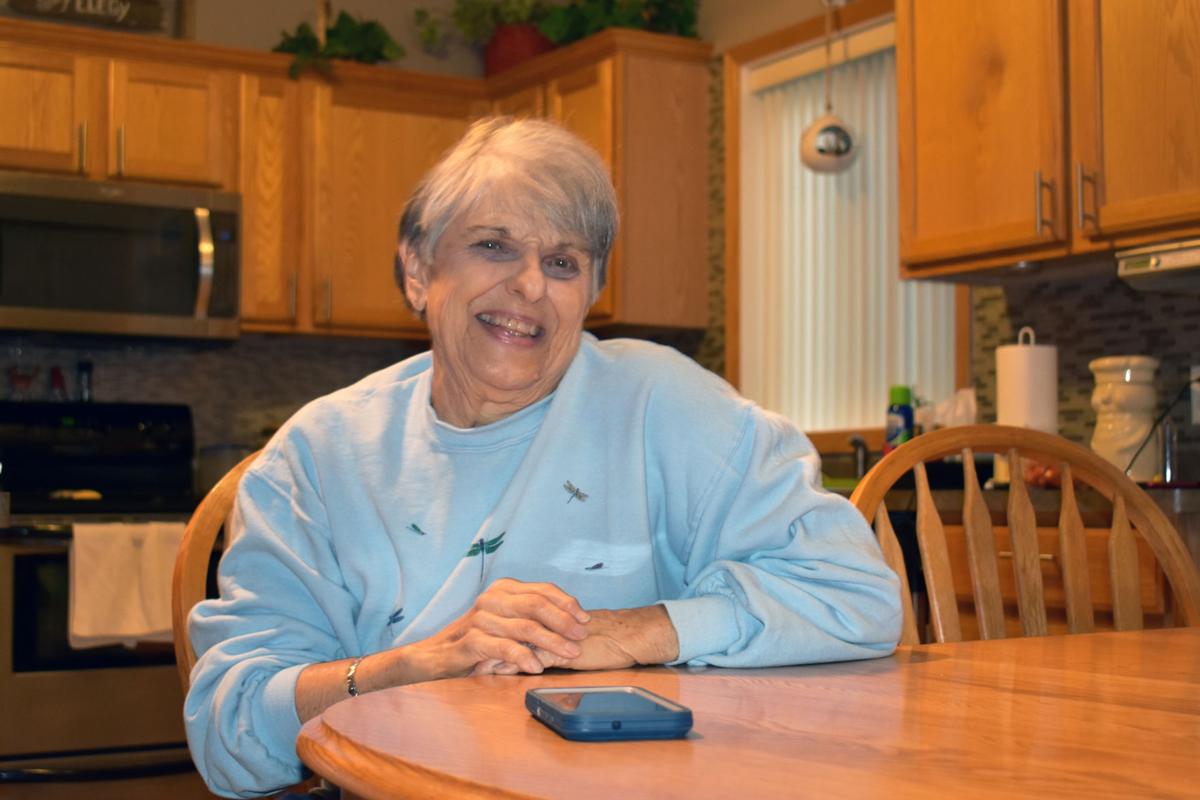 Terri Felegy sits at her kitchen table next to the phone used to record a StoryCorps interview. 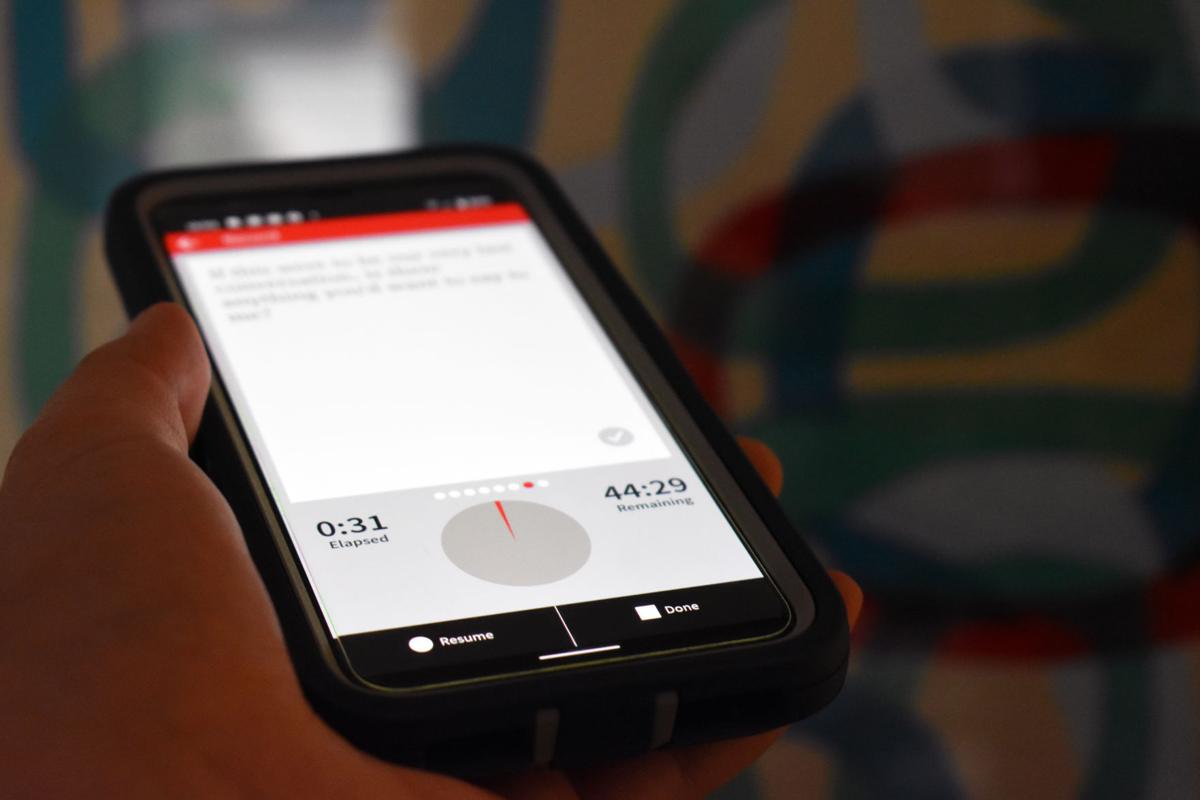 The StoryCorps app records audio up to 45 minutes, where people have the option to save it to the Library of Congress or keep it private.

Terri Felegy sits at her kitchen table next to the phone used to record a StoryCorps interview.

The StoryCorps app records audio up to 45 minutes, where people have the option to save it to the Library of Congress or keep it private.

Driving the 10-some miles to her house, I wondered about a few things.

Would she even want to answer any questions, even just one? Was I asking too much, prying into the history of her life?

After all, she’d already written two exhaustive journals for us grandchildren. They had the typical questions about growing up and memories and regrets, accompanied by empty pages ready for her trademark cursive notes. The two combined probably had a hundred questions, maybe more.

Her home smelled of lilies and cooked corn. We talked and ate dinner, then it was time to record. We downloaded the free StoryCorps app on my smartphone and sat down.

“Tell me somebody who has had a big influence on your life,” I read from the script.

For five minutes, I listened to my grandmother, Terri, talk of her own grandma “Baba.” Baba was patient, kind, and always had food to go around, she told me.

These kinds of chronicles are part of a StoryCorps collection of conversations both just like it and wildly different. The national program started in New York 17 years ago to record and save interviews to the Library of Congress.

Just a few years after forming, a StoryCorps segment was named the biggest collection of African American stories in history. The app launched in 2015 and now people can press record in any language from any part of the country if they have internet access and a way to tape it.

The nonprofit started chapters like Remembering September 11 or Stonewall Outloud (for interviewing LGBTQ+ elders) and has a corresponding National Public Radio program.

You can record up to 45 minutes of conversation, prompted by either your own queries or provided ones. You can save it either privately or publicly.

What do you want your great-great-grandchildren to know? What’s one of your happiest memories?

To keep things pandemically-sound, StoryCorps recommends people (who have to be 13 and older) to wash their phone and hands before recording, especially if you don’t live in the same home.

Sit at least six feet apart. Use a selfie stick or slide the phone across a table. Don’t interview if anyone is sick or may have COVID, its website read.

If all that is too much, or someone isn’t comfortable meeting in person, people can also use StoryCorps Connect to remotely record and talk together.

Journalists constantly ask people questions. And in turn, they constantly are hearing stories and seeing glimpses of lives. Their sources usually give a story depth or meaning to whatever it is they're writing.

But StoryCorps records for the sake of recording, albeit with an important goal to tell marginalized people's stories. And it does so with (extra)ordinary people.

Sure, the interview was recorded and is online perpetually. But here’s what that five-minute recording gave us, beyond a bit of nervous laughter and a Let’s Go assignment.

The recording kicked off a longer, offline conversation about my grandmother's life growing up. It took us to a pile of photos about from years back. We talked about how important she'd been and continues to be in my life (if you couldn't tell by the other article I wrote in March that included her).

You can write down all you want about your family’s past, but actually hearing it is pretty remarkable.

I am writing this the day after the interview, but in 40 or 50 years, I can listen to that one time we sat at the kitchen table during a pandemic and talked about where grandma got her patience from. And so can someone else.

Because StoryCorps isn’t entirely about two people, though that’s a big part. I’d argue it’s more for other people and ensuing generations. Maybe a fourth-grader in 2060 wants to hear about some Baba from Eastern Europe who came from Ellis Island and always made the best wieners. It’s history.

The streets were foggy on the way home that night, and some lilies grandma gave me filled my car with their sweet petals.

I listened to the recording one last time, hearing things I didn’t just a half hour earlier. Terri told me the how she’d have lunch with Baba in her kitchen all those years ago.

Baba spoke broken English, but they still talked. Now, Terri and I share the gift of communication and it'd be a shame to not unwrap it.

I think of telling future grandchildren about how I used to sit in “Grammy’s” kitchen over potatoes and strawberry slices, thinking about the bygones and the fullness of time all the same.

Those moments are probably things I'll remember forever. But even if I don't, I know of this neat app that has my back.

"We became a village. We didn't speak a lot, but she was always there for me."

Excerpt from "Interview with Grandma Terri - The influential woman of the hour: Baba"

Find stories or learn how to record your own at