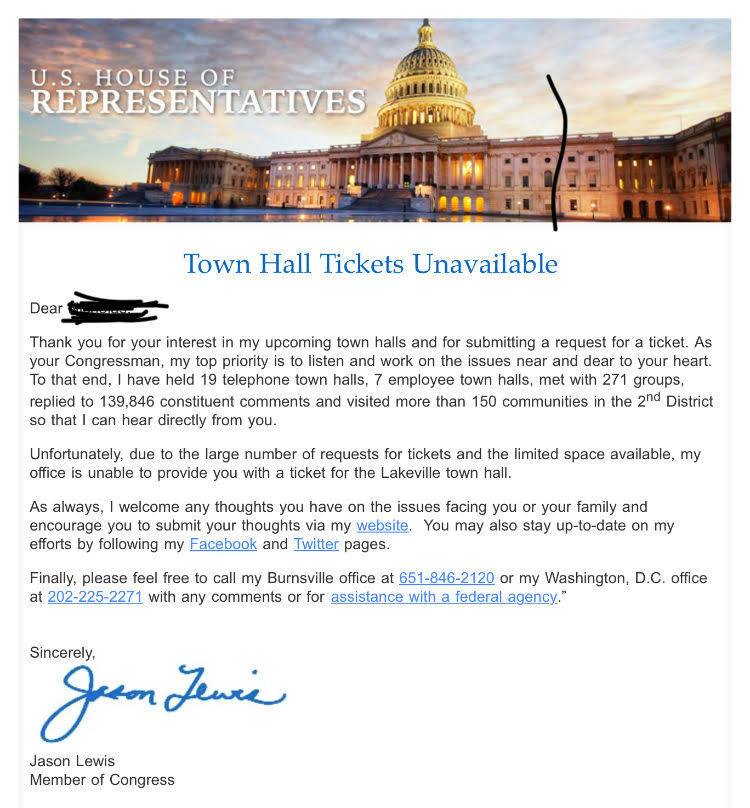 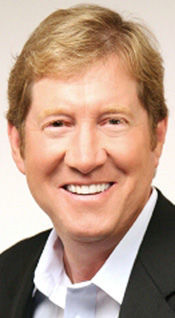 Residents of Minnesota’s Second Congressional District who registered to attend the first town hall meeting hosted by U.S. Rep. Jason Lewis learned Thursday if they received tickets to three events in the district Saturday, a move that left some constituents feeling unheard.

The first-term Republican announced the town hall events, to be held in Wabasha, Lakeville and Jordan, in a YouTube video on April 13 and in an email blast on April 13. People on his email list were invited to register for the events between May 10 and May 15.

Burnsville resident Nick Benson said he signed up immediately to get a ticket to the Lakeville meeting at Rosehenge Hall. On Thursday, he got an email from Lewis’ office saying he missed out on a ticket.

Benson, a web developer who runs his own business, said he generally disagrees with Lewis. He wanted to attend to ask the congressman where he stands on net neutrality, and express concern over Lewis’s support for the GOP tax bill, which he said he opposes despite personally benefiting from it.

The ticketing format of the town hall doesn’t sit well with Benson.

“It doesn’t pass the sniff test that he has a legitimate desire to talk to his constituents,” Benson said.

Shakopee City Councilor Matt Lehman said he got his ticket to the Jordan event Thursday. He registered right away following the email blast. Lehman, a conservative who has participated in previous telephone town halls with Lewis, said he wants to ask about federal transportation financing.

Lehman said he wouldn’t be surprised to have the event turn into a screaming protest affair, but hopes that doesn’t happen.

“Everybody needs to be grown up and be talking about issues,” Lehman said.

Lewis’s office did not respond to requests for comment Thursday on how tickets were awarded and the size of the venues.

Reached by Southwest News Media, Rosehenge Hall official said it could handle 200 people. In Jordan, a Carasim Coffee Shop worker said they were preparing for 75 people. The National Eagle Center in Wabasha was planning on 65 people.

Town hall events are among the oldest traditions in American politics, dating back to pre-revolution New England, according to Larry Jacobs, a political scientist at the University of Minnesota Hubert H. Humphrey Institute of Public Affairs.

Or at least it used to be.

Loud, shouting protests at town halls have occurred throughout American history, but hit new levels in 2009, Jacobs said, when forebearers of what became the conservative Tea Party movement staged angry disruptions of town halls over the Affordable Care Act. Activists on the left learned from this, Jacobs said, and have been using similar tactics on conservatives in the Donald Trump presidency.

Conservatives in the southwest metro such as Lewis and U.S. Rep. Erik Paulsen are in a bind because any town halls they have will be obstructed, but not having town halls makes them seem afraid to talk, Jacobs said.

Still, he opposes ticket requirements and demands to show identification at town hall meetings and argues such measures “stamp out the spirit” of the events. Instead, Jacobs suggests setting rules that ban signs and screaming.

While town halls might be at a rough patch in the age of YouTube, Jacobs believes the real thing is still preferred over telephone town halls, where constituents' calls are typically screened.

“They get canned questions and give canned responses,” he said.

Apple Valley resident Tony Contino said he was disappointed to learn Thursday he didn't receive a ticket to the Lakeville town hall. Contino, a Democrat, said he registered to get a ticket the day he received the email invitation from Lewis.

“Unfortunately, due to the large number of requests for tickets and the limited space available, my office is unable to provide you with a ticket for the Lakeville town hall,” said an email from Lewis’s office to denied applicants.

“He’s labeling this as an open event and it’s really not,” Contino said.

Democrats Contino knows who are attending plan to be civil and ask questions, he said, adding he doesn’t plan to go to the event without a ticket. He wanted to ask Lewis about health care and where he stands on a resolution to protect the investigation of Special Counsel Robert Mueller’s probe into Russian interference in the 2016 election.

“I don’t think it would really do much good for me to go stand out front and protest,” Contino said. “If he’s not going to have me there and listen to me, I’d rather go spend time with my kids.”

Congressman Jason Lewis will host town halls in Wabasha, Lakeville, and Jordan, Minnesota this Saturday, May 19 at:

Minnesota Congressman Jason Lewis defended his positions on taxes, guns and the environment in a hour of questions, compliments and criticism …