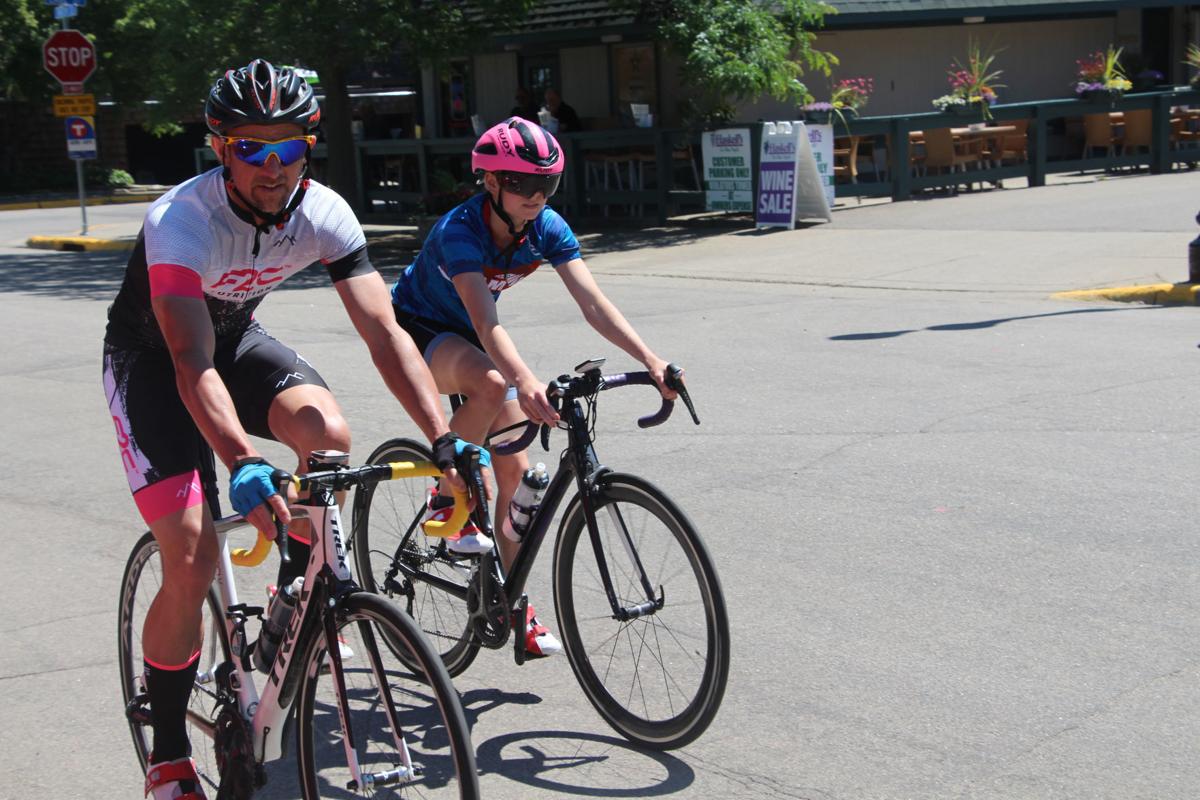 Mike Buenting and his daughter, Bella, bike on Water Street in downtown Excelsior as a part of their daily training. “I can’t imagine not doing triathlons,” Mike said. 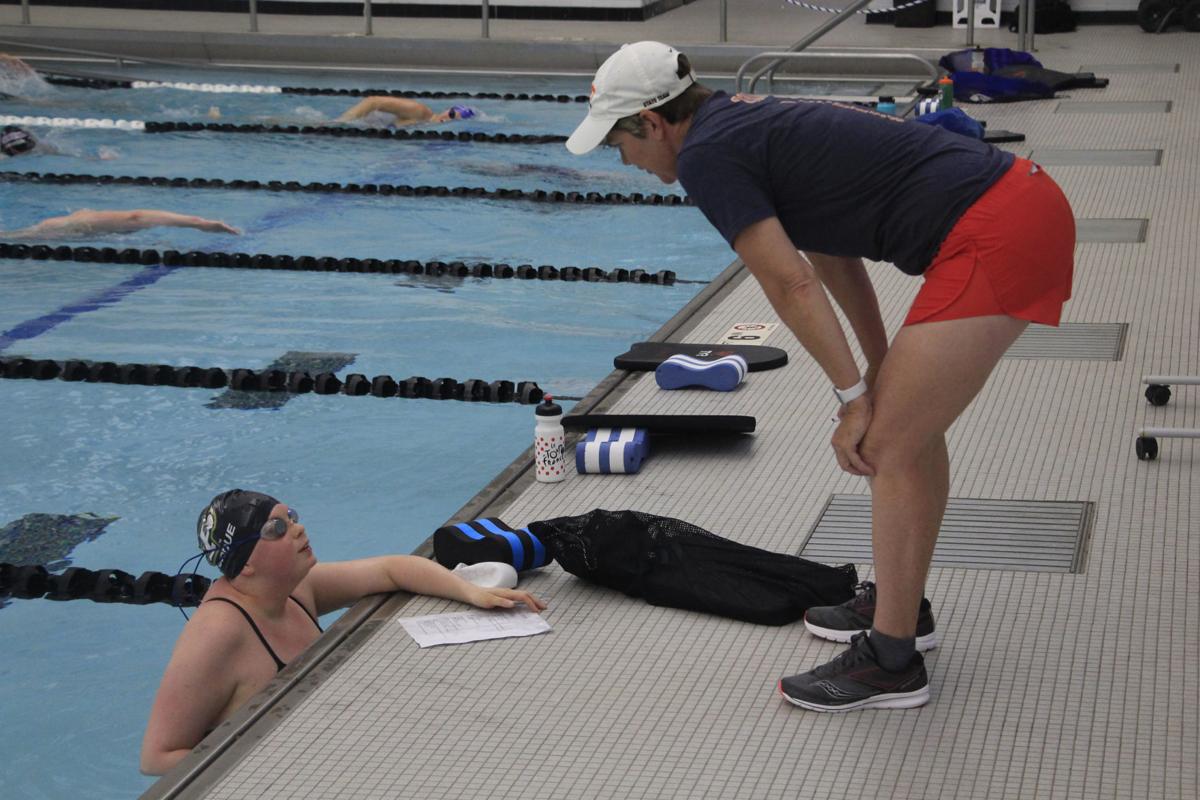 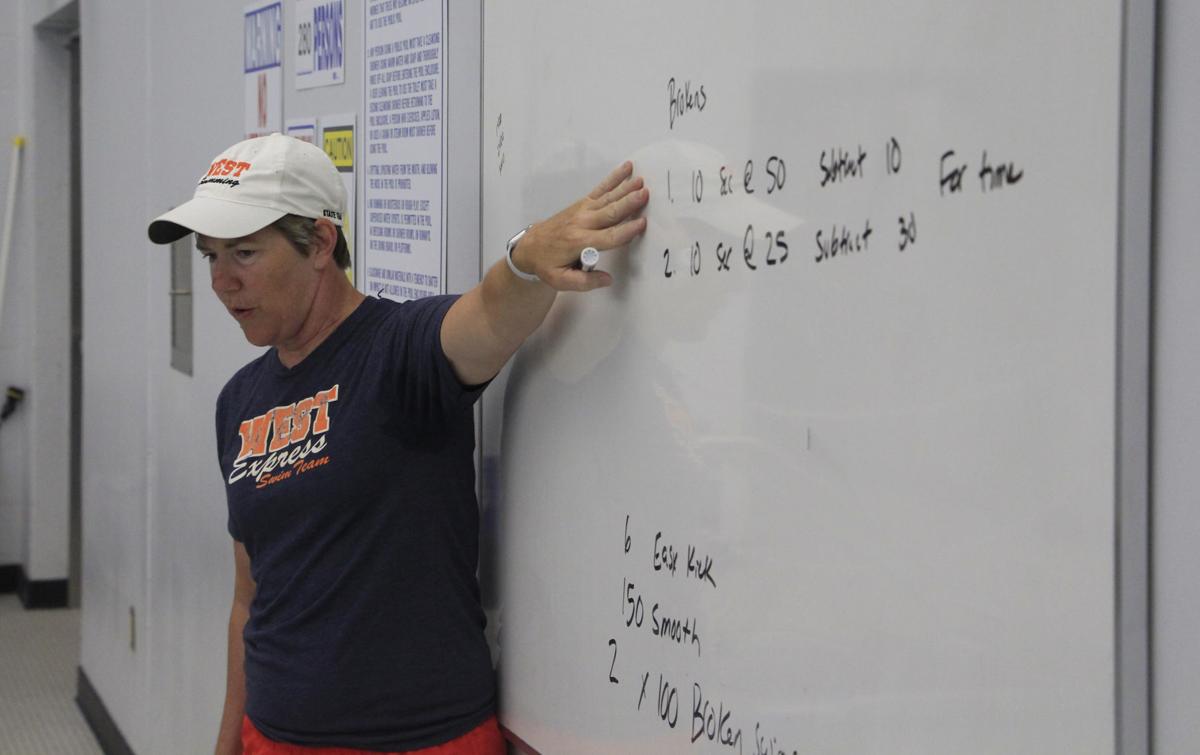 Heidi Miler gives the swimmers she coaches instructions on the next set intervals to practice. The age group she works with ranges anywhere from 18 years old, to middle-aged swimmers. “Where do you get to work with such a wide age range of people?” Miler asked.

Mike Buenting and his daughter, Bella, bike on Water Street in downtown Excelsior as a part of their daily training. “I can’t imagine not doing triathlons,” Mike said.

Heidi Miler gives the swimmers she coaches instructions on the next set intervals to practice. The age group she works with ranges anywhere from 18 years old, to middle-aged swimmers. “Where do you get to work with such a wide age range of people?” Miler asked.

Heidi Miler was used to the grind.

Years of competing in triathlons do that to a body.

Eight years ago, Miler and her triathlon buddy, Ann Snuggerud, were biking on Smithtown Road in Excelsior when suddenly they collided. A broken elbow for Snuggerud and a broken wrist for Miler were the byproducts of their crash.

But instead of a trip to the hospital, they had a bike ride home to finish. Lifting their bikes up off the ground, they rode with their broken bones and continued training. All the while, physical pain took a backseat to mental toughness.

A Chaska native, Miler, 54, has been coaching the WEST Express Swim Team for the past decade. Prior to WEST Express, she coached at Highland Park/St. Paul Academy for 10 years. Growing up, running and swimming were her passions, qualifying for multiple trips to the high school state meets in both sports. Under the tutelage of swimming coach Marty Foster, she won 18 All-American awards, as well as an academic All-American honor, at Hamline University.

As her love for swimming and running increased during her athletic career, a new athletic competition became popular: triathlons.

A combination of running, biking and swimming, Miler became enamored with the reality of competing in three sports during the same event.

The first one Miler competed in was the Johnnie Bread Triathlon in 1983 on the campus of St. John’s University in Collegeville, Minnesota. With no helmets and a loaf of homemade Johnnie bread, baked on the college’s campus, waiting at the finish line for the winner, she fell in love with the sport.

For four years starting in 1988, Miler devoted time into competing as a professional triathlete. Making no more than $5,500 in a year, the lack of income did not deter Miler from the sport.

“Triathlon became a way of life,” she said.

Life consisted of getting up, training, eating and sleeping. Wash, rinse, repeat. Eventually, Miler came to a point where the training and hard work to thrive in the sport felt mundane and inconsequential.

“There should be more to life than just training,” she said. “The triathlon life is fun but also a grind.”

So, she pursued coaching.

At WEST Express, there are eight coaches on staff, with Miler being the head coach. Her main focus is on the senior group, which is comprised of 77 swimmers, ages 12 and older — all of whom she knows.

“I have always liked coaching,” she said. “It’s fun to make a difference.”

While coaching continues to play a large role in her life, she still finds time for pushing herself individually. In September of 2012, some of her friends finally convinced Miler to do an Ironman race, consisting of 2.4 miles of swimming, followed by 112 miles of biking and ended by running a marathon, 26.2 miles. Miler had put off racing an Ironman for years, but finally decided to try one.

Turns out, she had the fastest amateur female swim time.

As she crossed the finish line in 11 hours, three minutes and 42 seconds, after being cheered down a tunnel of screaming fans, 140 miles of hard work metamorphosed into overwhelming joy. “I put it up there with getting married and having kids,” Miler said. “That’s how high it felt in my life.”

Laura Cunningham, a member of Miler’s swim group she coaches, credits her coach for encouraging her to pursue racing her own Ironman. “Heidi was the reason I did my Ironman,” Cunningham said.

As a whole, Minnesota is a state that embraces the sport of triathlon. But recently, there have been some questions regarding the future success of the sport. According to Jerry MacNeil, editor of “Minnesota Tri News” and an announcer at over 1,800 races, at one point in the past decade Minnesota averaged hosting 83 triathlons and duathlons, a race that involves only running and cycling. However, recently that number has roughly been cut in half.

According to MacNeil, problems such as rising race expenses, higher entry fee payments, and a generational changing of the guard of the athletes who race are partly to blame for the drop in popularity. But MacNeil thinks that there’s reason to be hopeful.

“There are a lot of great resources (in Minnesota),” he said. “We come from a very fitness-oriented community.” Although MacNeil said it’s hard to officially predict the future popularity of the sport, he has an idea of how to get people more interested with the sport.

“The trend should be towards more short course races to introduce people to the event,” he said.

The sport continues to be popular for die-hard triathletes like Mike Buenting, of Chanhassen.

A cycling instructor at Life Time Fitness for years, as well as a coach for marathon runners, Buenting, 45, has been involved with triathlons most of his life. He has competed in two Ironmans, Arizona 2012 and Madison 2014, several half Ironmans, as well as racing for Team USA at world championships five times.

“I live to push my limits and see how far I can go,” Buenting said.

But all that pales in comparison to his favorite part of the sport today: competing and training with his daughter, Bella.

An avid triathlete herself, Bella Buenting, 16, is a senior at Minnetonka High School. Currently, she is a part of both the swimming and cross country teams at the high school and has been since seventh grade.

“The kid has a lot of talent,” her father, Mike, said.

However, the one aspect of triathlons for Bella that is not as strong as the others, she says, is the biking, although it has vastly improved over the years.

That’s where her training partner comes in.

“When it comes to biking, he [Mike] has taught me everything,” she said.

Hard work means getting up at 7 a.m., declining late nights hangouts, and difficulty finding time for watching shows like “Supergirl” and “The Flash” on Netflix, or listening to The Lumineers and the punk rock band Metz. But it’s worth it for the Buentings.

“I like to put in the work,” Bella said.

Mike finds himself putting in the long hours of hard work for a specific reason. “I get up and push myself because I want to make her [Bella] proud,” he said. “I want her to think her dad is pretty cool.”

Conversely, she has had the same effect on her father.

“She [Bella] motivated me to become a better swimmer,” Mike said.

And now, a little over one year from now, the elder Buenting will have to adjust to being apart from his college-bound daughter.

“I don’t know if dad is ready for you to go to college,” he said to his daughter. “I am going to miss my training partner.”

Bella said that she has received interest from the University of San Francisco, Northern Vermont University and Daemen College. Recently, around 30 schools in the NCAA have begun to add triathlon as a varsity sport. Bella is already a sought-after recruit by those schools, but she also has dreams of pursuing a career in health science or physical therapy.

Mike also has a passion for collegiate recognition toward the sport of triathlon. In August, he will partner with USA Triathlon and host the first-ever combine in Minnesota for high school girls who want to pursue a collegiate career in the sport.

For a man who has devoted his life to this sport, expect his passion and love for the three-sport extravaganza to last as long as he does.

“When I can’t do this anymore, you might as well put me in the ground,” Mike said. “I’ll do anything for the sport of triathlon.”