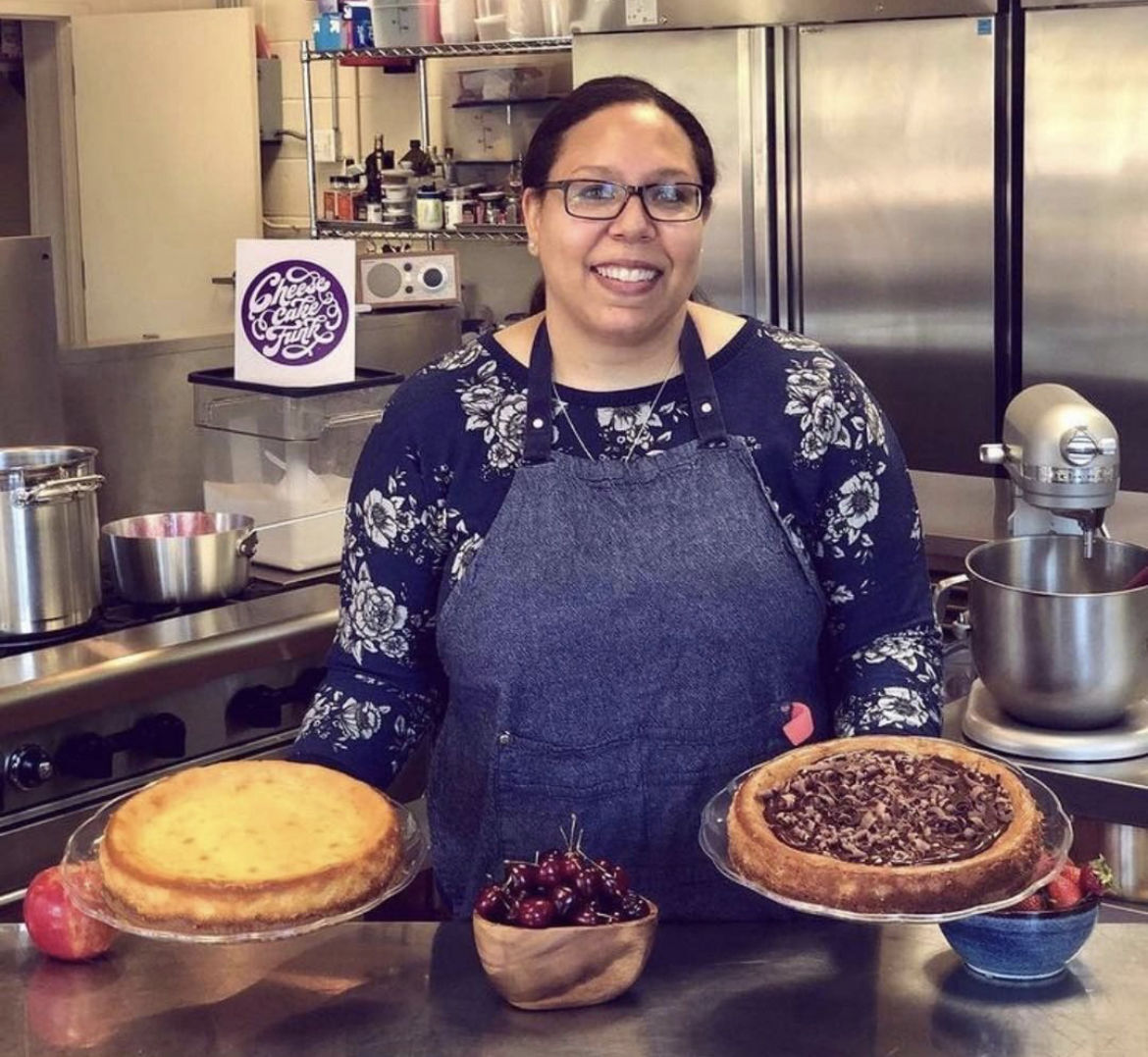 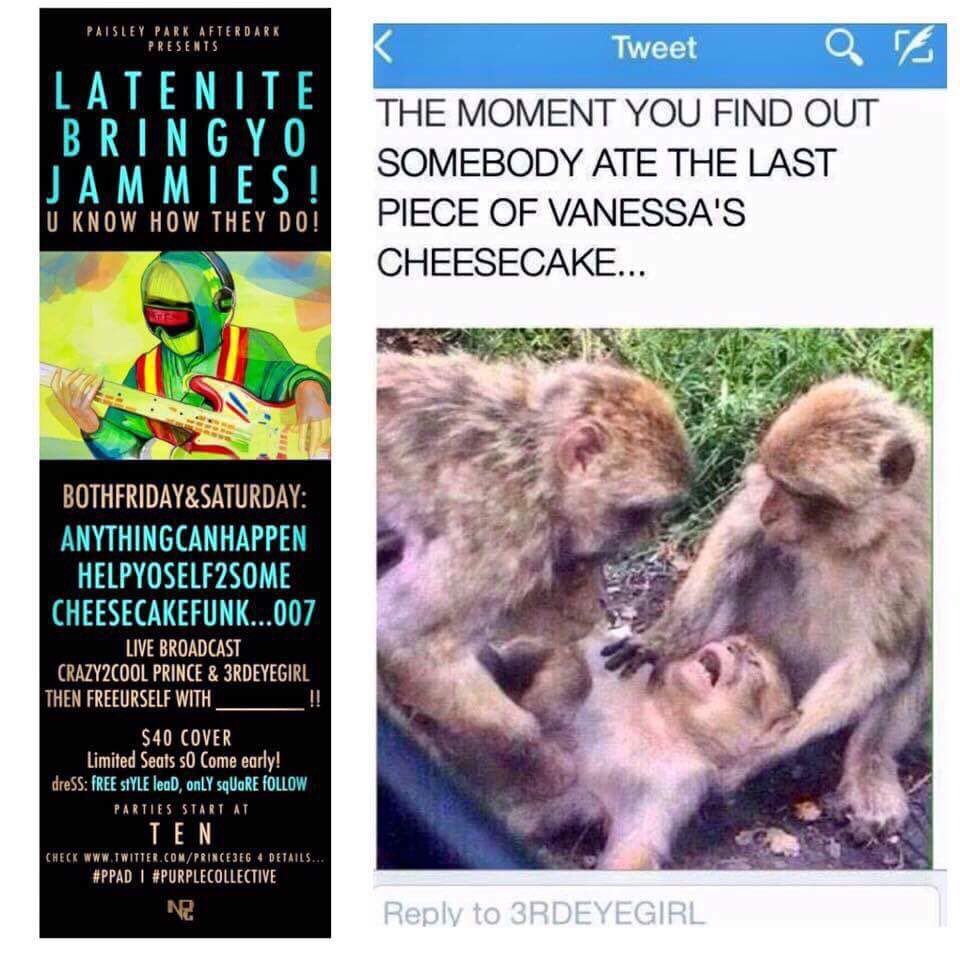 A screenshot of Prince’s tweet about Cheesecake Funk, and the invitations sent for Paisley Park parties.

How many bakers can say their cheesecake is Prince-approved?

While working part-time in 2013 selling merchandise at Paisley Park (on top of her day job as a paralegal), Cheesecake Funk owner Vanessa Drews wanted to bring good food to band members and fellow staff.

She left her homemade cheesecakes, in flavors like turtle and banana cream, in the refrigerators for anyone to enjoy — including Prince himself.

“I never in my wildest dreams thought Prince would eat it. I thought he was vegan!” the Chanhassen resident laughed. “But he found it, loved it and started mentioning it on international invitations to Paisley Park.”

His references to her famous baking unwittingly named her future business: “HELPYOSELF2SOME CHEESECAKEFUNK,” which was printed on the invitations. He even tweeted about her — a meme of some monkeys comforting a monkey who has fainted, with the caption “THE MOMENT YOU FIND OUT SOMEBODY ATE THE LAST PIECE OF VANESSA’S CHEESECAKE …”

Drews’ reach has since gone far beyond the Paisley Park fridge. After quitting her job in 2019, she’s been a full-time, one-woman show, supplying desserts for popular Twin Cities restaurants like Crave and Tequila Butcher and fulfilling individual orders from fans around the metro. She now has 14 flavors — one named Chocolate Rain.

Drews chatted with the newspaper while whipping up her next batch of cheesecake at her commercial kitchen in Chaska.

1 How did you get into cheesecake?

I was just baking for family and friends for many, many years, until a friend of mine wanted to add my cheesecake to the menu at McMahon’s Irish Pub in south Minneapolis in 2008. But sadly, there was a fire that took over the building and the restaurant a few years later. After that, I kept my day job and took orders on the side for family and friends during holidays, just as a passion of mine.

After Prince’s invitations listed my cheesecake, people sought me out when they visited Minneapolis for Paisley Park. When Prince passed, I went back to my day job before I was approached by the owner of Crave restaurants in August 2019. They told me to prepare for volume, because they really wanted to ramp up and add my cheesecake to all the menus. I’d always wanted to bake full time, and I knew I just needed to take the leap of faith and go for it.

2 How has business been since you opened?

The 2019 holidays were very busy, but then, COVID hit. My primary customers were restaurants, so when they closed down, I kind of went into fight or flight mode and tried to figure out what to do to stay open. Because I’m not a restaurant, I couldn’t get any small business loans ... so I knew I had to find a way to connect with people safely to stay open. I had my website redesigned so people could order online, and I set up specific days and times for them to pick up so we don’t have any direct contact.

Doing everything by myself is hard, but my customers are safe, because it’s just me. Valentine’s Day was so busy ... I probably made 130 cakes just for individuals in four days. I just got a new restaurant contract in Rochester. I’m limited to what I can do, but once it’s safer and I can get more help, I want to connect with more organizations like the Twins or Vikings to get my products in stadiums ... I feel like my product is very special to Minnesota.

3 What’s your favorite flavor? My banana cream is one of my favorites. I make fresh whipped cream and add vanilla bean to it, it’s simple but delicious. The white chocolate caramel is also great, I have a French chef who makes all my caramel from scratch. I think using quality, amazing ingredients has really paid off. And Prince really liked my turtle cheesecake.