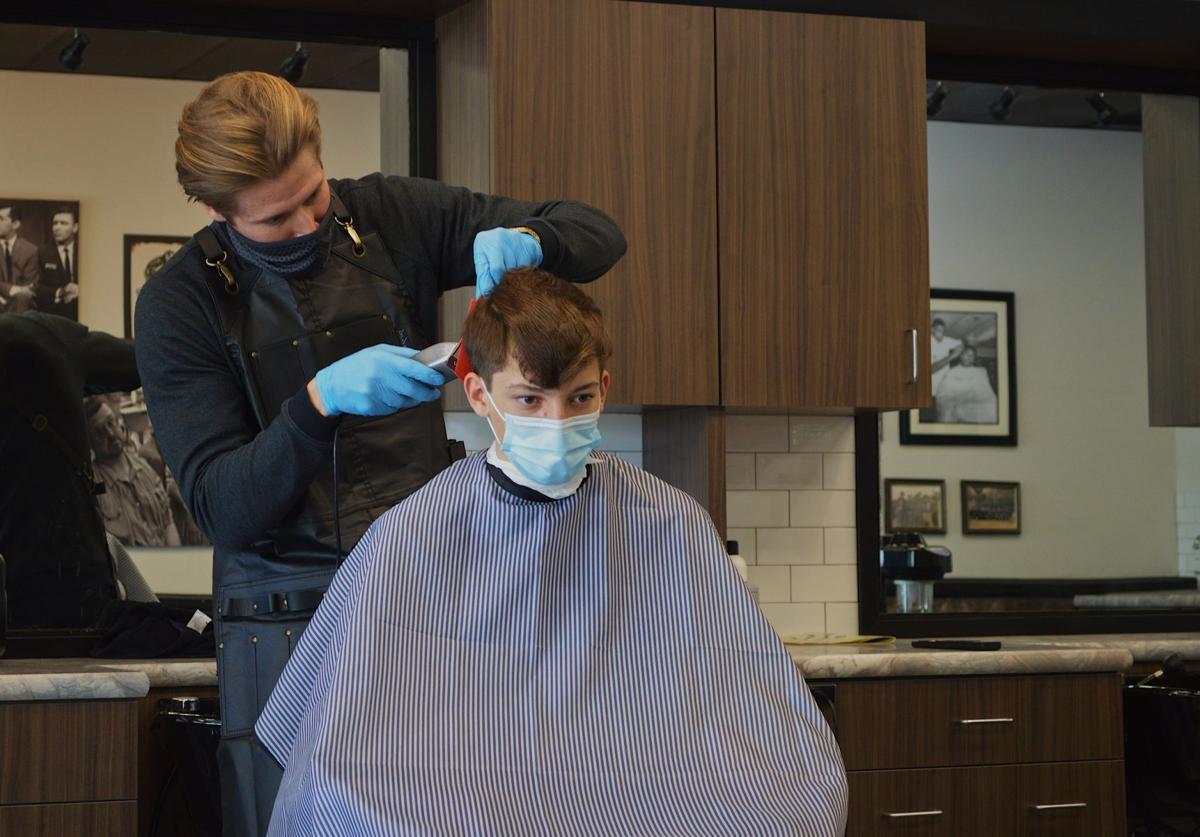 Maybe it’s their logo, a bearded and mustached skull smoking a cigar, with a red, white and blue barber’s pole in the background.

Or the nicknames for their services: “The Dr. Evil” for a straight razor shave, “Tell Us What You Want” is the house cut and “I Found a Grey Hair” gets you a coloring touch-up.

There’s beer in the fridge — currently Coors Light and Budweiser, then whatever’s on sale at the MGM Wine and Spirits next door — an amalgamation of manly decor, flat screen TVs and a classic checkered floor.

All meant to bring back the feeling of the indulgence of old-fashioned grooming at a reasonable price, said owner and barber Dan Jost.

“There’s a process around a shave here, with steamed towels, layers of hot lather to soften the beard. You lean back in the chair and put your feet up. It’s a relaxing opportunity,” said Jost. “We’re not trying to replace your daily shaving routine at home, but we want to show that there’s still a space to enjoy something like that.”

Man Cave is bringing a new kind of old-school service to Chanhassen, one reminiscent of the days when the barbershop was as much of a community staple as the town hall. Stop in for a classic cut, fresh shave and conversation, and leave feeling well-groomed with a smile on your face, Jost said.

The shop, located in the old SuperCuts spot in Market Square, held a soft opening in late January, with plans to fully open by Valentine’s Day weekend.

“We’re not trying to compete on speed, or have people feel like they have to go home and shower or style their hair. We want to make it so you can jump on a plane, go to a business meeting, head right to dinner,” he said.

Until he started barber school in 2019, Jost’s prior barber experience took place in his college dorm room 30-some years ago, where he cut the hair of dozens of his football teammates. But after his family moved to Miami for Jost’s corporate job, he took his son to an old-school barbershop and instantly saw the appeal.

“The atmosphere and culture was incredible. It was very welcoming and warm, and because of the layout of the shop, you felt like you could jump into any conversation,” he said. “But the big thing was that you got those old services you don’t often see anymore.”

For example, the straight razor shave. Only licensed barbers can use the straight razor on a client’s neck or face, but many salons hire cosmetologists who can’t offer it. Men’s facials, another service Man Cave has (though it’s nicknamed White Noise Time), are also different from the typical facial women would get at a spa.

“I thought, ‘Wouldn’t it be nice to come somewhere like this for work?’ Talk with people, have some laughs, and bring back those things no one has seen for a long time,” Jost said.

After moving to Chanhassen in 2016, debating for a few years and being encouraged by his wife, he left his job and enrolled in the Minnesota School of Barbering in Minneapolis in 2019, where he met fellow barber Charlie Krengel. Though Krengel initially planned to stay at a shop in Eagan, he soon joined Jost in Chanhassen.

“In school, I’d watch Dan come up with his business on a notepad, and we’d play around with different ideas. I always had it in the back of my mind that it would be fun to work with him. Once he got his own place going, I wanted to come over here,” Krengel said.

The new venture didn’t come without delays. The pandemic extended Jost’s program and pushed his licensing exams back. He signed the lease for the Market Street location in October, a month after he graduated from barber school.

The goal for the shop was to capture that 1950s and 1960s nostalgia, while still bringing in things that men would put in their own “man cave” — but in his own words, most guys, including Jost, are terrible at decorating.

So, he brought in a designer to help, who assisted with cosmetic changes like the tin ceiling, partially checkered floor and color scheme. The walls hold flat screen TVs, movie posters, sports memorabilia (including a Chanhassen High School Storms jersey), “different themes and hobbies that are all still cool,” he said.

Because the location previously housed chain salons like ProCuts and Supercuts, most of the changes were cosmetic. Still, supply chains were held up, keeping electricians, plumbers and carpenters from progressing.

“It was like the chicken and the egg. Everybody was just waiting on each other. Two-week projections became two months,” he said.

How do you shave someone’s face during a pandemic?

A mask, a face shield, and the same hygienic standards barbershops have always upheld, Jost said.

Compared to other locations like bars, restaurants and entertainment venues, there have been very few COVID-19 cases directly linked to barbershops and salons, due in part to the strict sanitation procedures barbers were already accustomed to, Jost said. They were even ahead of the curve on social distancing — salon chairs legally have to be at least five feet apart (Man Cave’s are six).

“The biggest change for us was the masks. We wear them, clients wear them unless they’re getting shaved. We put on a face shield when they take theirs off and as soon as the shave’s over, the customers puts their mask back on,” he said.

The shop is just getting started, but Jost is already thinking ahead. He and Krengel are the only barbers, but depending on business, he’ll hire another when summer rolls around (and men’s haircuts become more frequent). They’ll carry the retail products they use — lines you can’t buy at Target or Walmart, he added. Sometime this year, he’s putting in a shuffleboard table and a small fireplace.

In his wildest dreams, there will be three shops around the metro: one in Chanhassen, one farther south in Chaska or Shakopee, and one in Excelsior or North Minnetonka.

Until then, Man Cave Barber Co. will be sharing its social media pages, passing out flyers, sponsoring youth sports and spreading the word.

“We’re not about the latest trends and Tik Tok styles, but you’ll get a good haircut, have a good experience, good conversation, and be able to relax,” Jost said. “You should walk out the door feeling good about your appearance and yourself. That’s what we think is most important.”