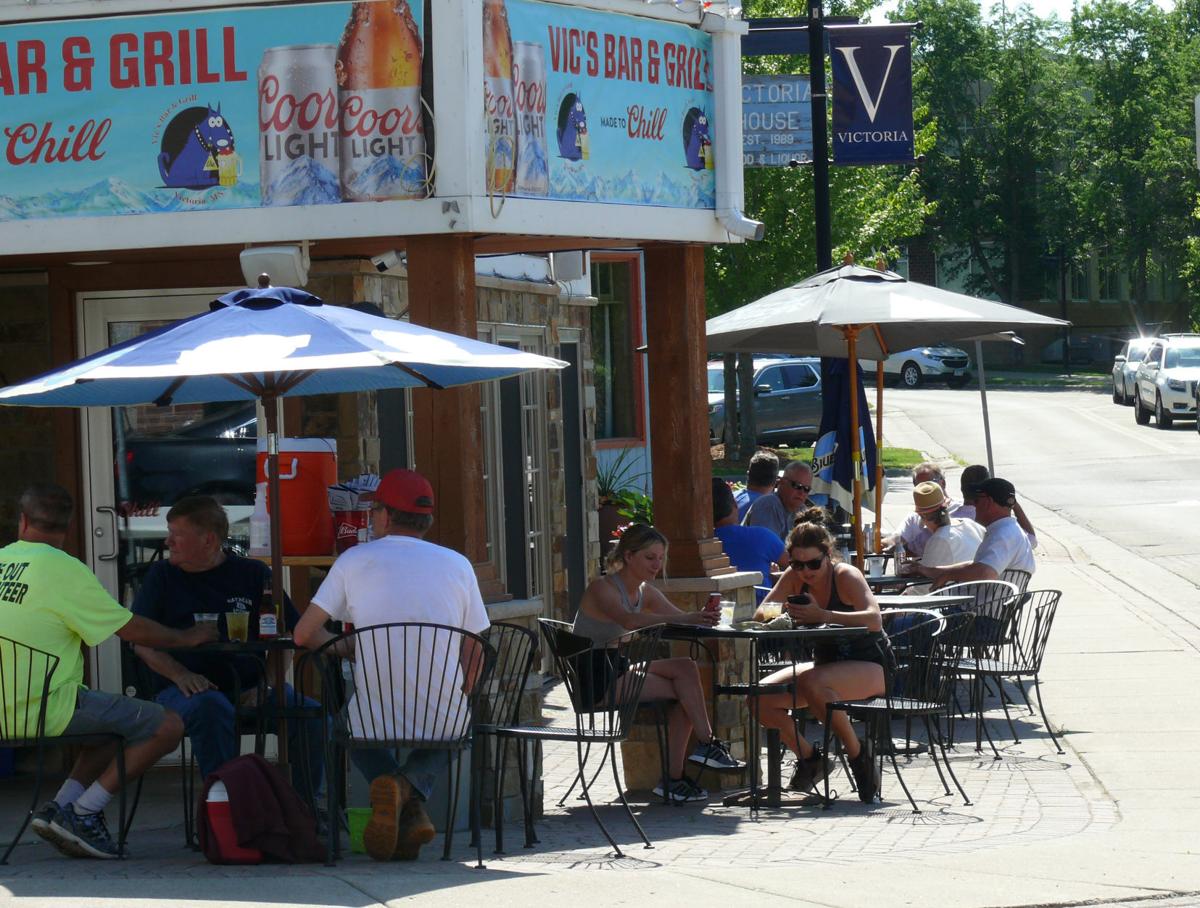 Diners take in patio dining at Vic’s Bar and Grill on Monday. 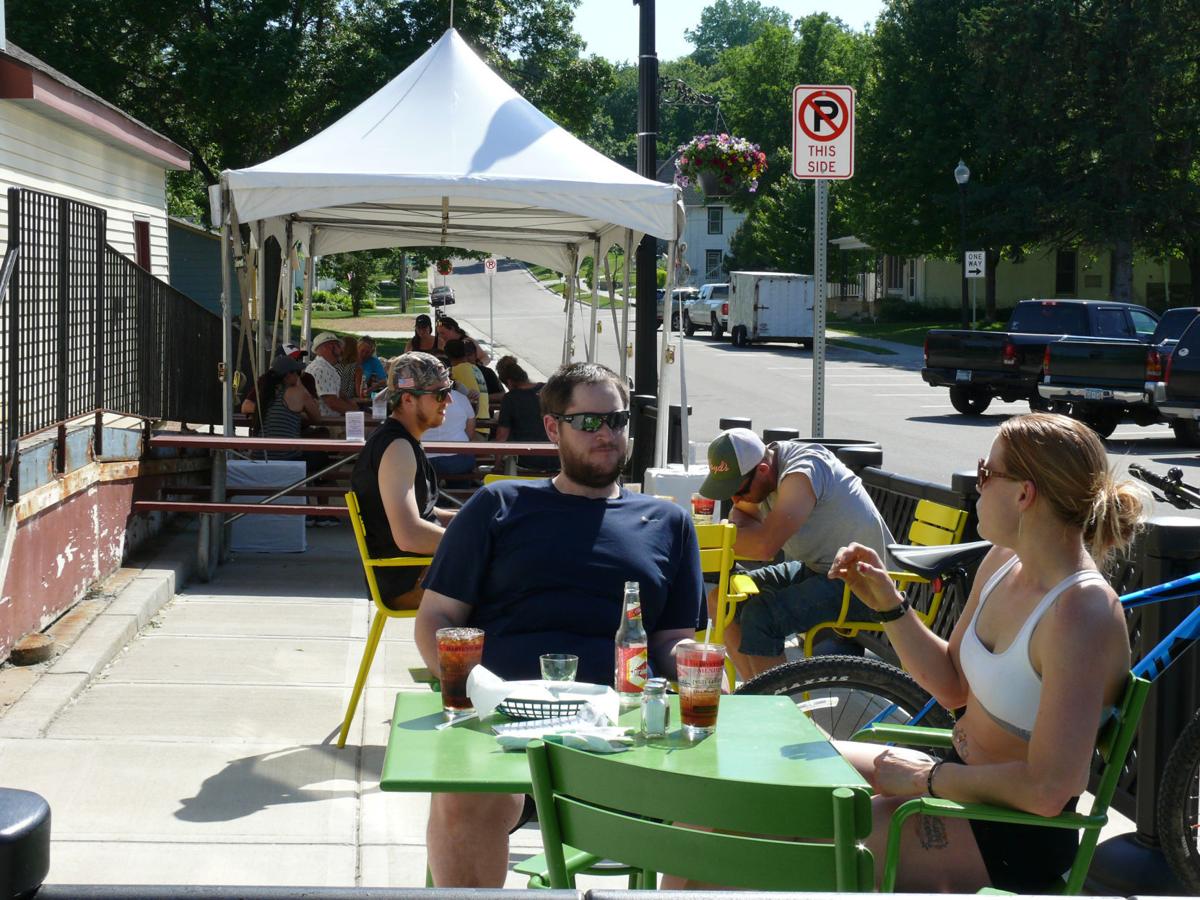 Patrons enjoy the patio at Harvey’s in Carver on Monday.

Diners take in patio dining at Vic’s Bar and Grill on Monday.

Patrons enjoy the patio at Harvey’s in Carver on Monday.

It might not be back to normal, but a few cold beverages with friends outside a bar and grill on a hot day sure hit the spot Monday for Tom Seedlaw and Amie Bogartz.

“I know what forever feels like now,” Bogartz, 24, said, getting a smile from Seedlaw and two others at the table outside Vic’s Bar & Grill in Victoria. “It seems like that’s been how long it’s been since we’ve been allowed to get together.”

“It’s like we have freedom again,” Seedlaw, 27, added. “Sure, we want to be smart about it all, but at least now we have a little sense of normality again.”

Monday marked the opportunity for businesses to reopen under specific guidelines, all related to the pandemic concerns.

The Victoria City Council recently approved a resolution pertaining to the reopening of businesses and granting regulatory flexibility to local businesses.

That resolution designated a new city-wide event — Eat Street 2020 — from June 1 to Oct. 1, which provides flexibility to city staff to temporarily relax some zoning regulations, including the expanded use of outdoor space.

A large white tent has been erected in parking spots on the south side of Victoria restaurant Winchester & Rye in Victoria, with plenty of seating underneath.

“We had a meeting with city officials and they are allowing us to use parking spots, which is good news,” said business co-owner Kim Heenie, adding that several other local businesses are contemplating utilizing the new open-air seating expansion opportunity.

Businesses must apply for the permit, which allows for creation or extension of outdoor commercial space.

“I just want to be open,” she emphasized. “I’m not sure what to expect, crowd-wise, but I think people will come because they are frustrated by all this too and want to get out again.”

Winchester & Rye will add another section of outdoor seating Saturday during festivities related to its one-year anniversary. The event, called “6 feet on the grass,” allows customers to enjoy take-out meals while sitting on blankets on a grassy area of the grounds.

Reservations of four (six if family) are required with limited space. There are two seating times, 5:30 p.m. to 7 p.m., and 7:30 p.m. to sundown. There is a $10 reservation fee, which includes homemade cheesecake to celebrate the anniversary. There will be musical entertainment.

“This is not exactly how we intended to celebrate our first year, but we think it is something special; something people will remember,” Heenie said.

She said neighboring restaurants are working together as best as possible during difficult times.

“This has really been rough on all of us,” Heenie said. “It is so great to have such incredible neighbors. We all just want to see each other succeed. We appreciate so much all the support we get.”

That kind of support influenced, in part, why coworkers Lorin Schwieger and Colin Steinbach, both of Chaska, stopped at Harvey’s Bar & Grill in Carver late Monday afternoon.

“We’re out here because it’s been so long that we haven’t been able to,” Schwieger said, while the two enjoyed steak bites and beverages on the outdoor patio. “It’s nice to see things are opening up.

“But the biggest thing is to show support for the small towns and businesses and get some income back going again,” she added. “It’s a really good feeling.”

“It almost feels normal again, but you still have that sense of worry,” Steinbach said, referring to the virus. “You’re out of the house; you get to relax and chill out, but you still have to look around and be six feet apart and all that, and you have to keep that in mind, because it is a serious thing.”

Mitchell Thomas, 34, of Waconia, thought the correlation of the pandemic and reopening of patios outside bars might be a good thing.

“Hey, if I have to call in sick, I can always say it’s Covid-related,” he said with a smile, outside Harvey’s. “Naw, I wouldn’t do that; it feels too good to be out and about again.”