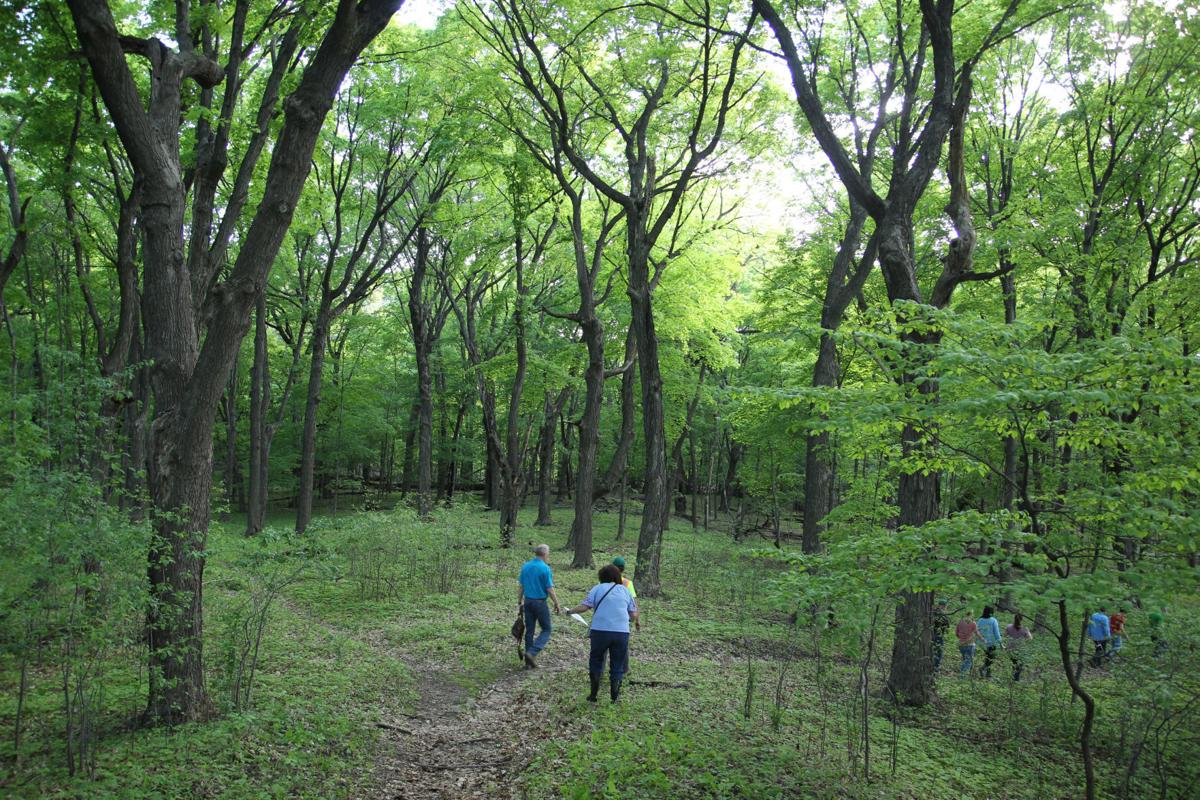 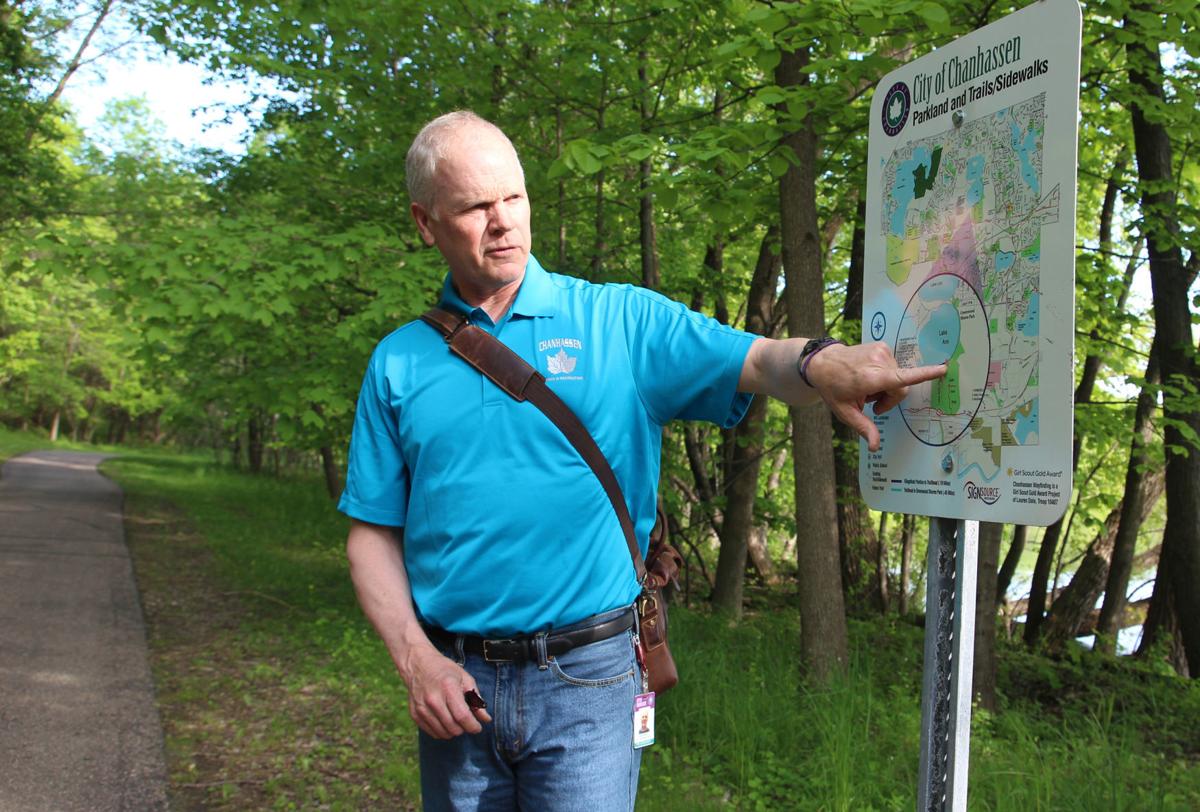 Todd Hoffman, director of Parks and Recreation points out a trail sign near the entrance of the Lake Ann trail expansion, formerly known as the Prince property. 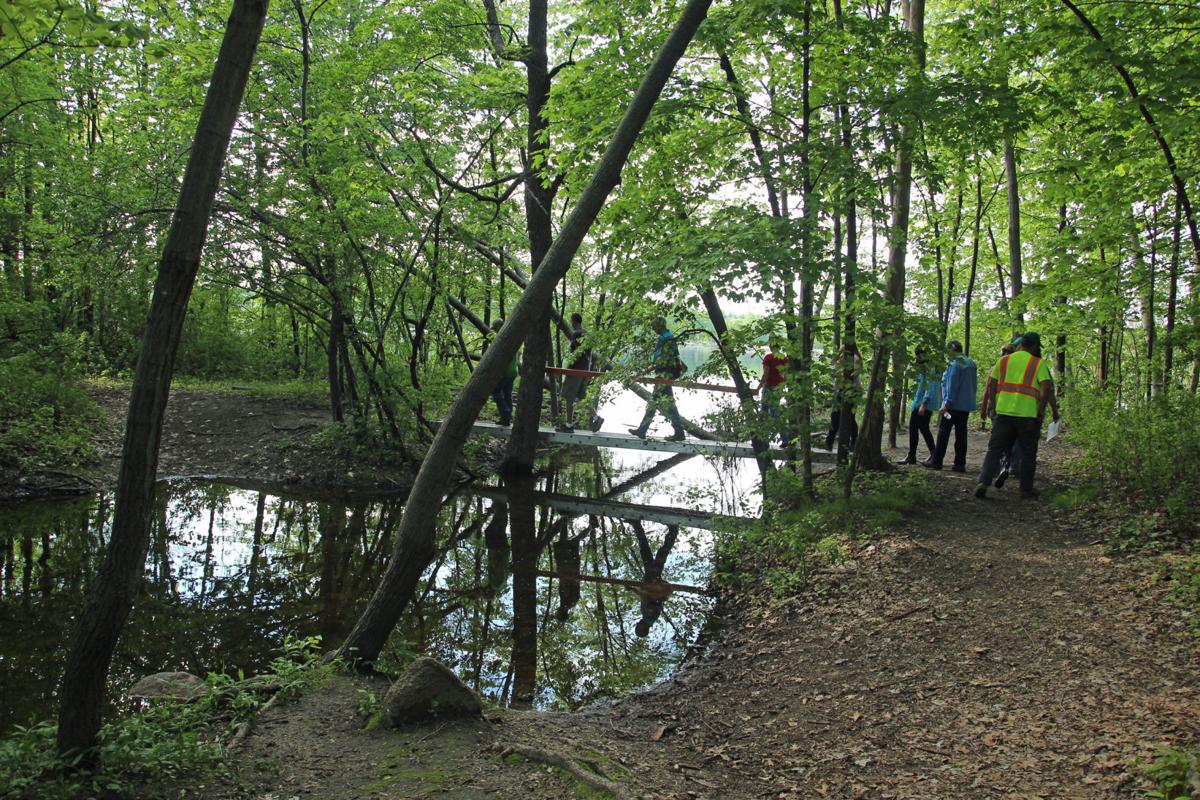 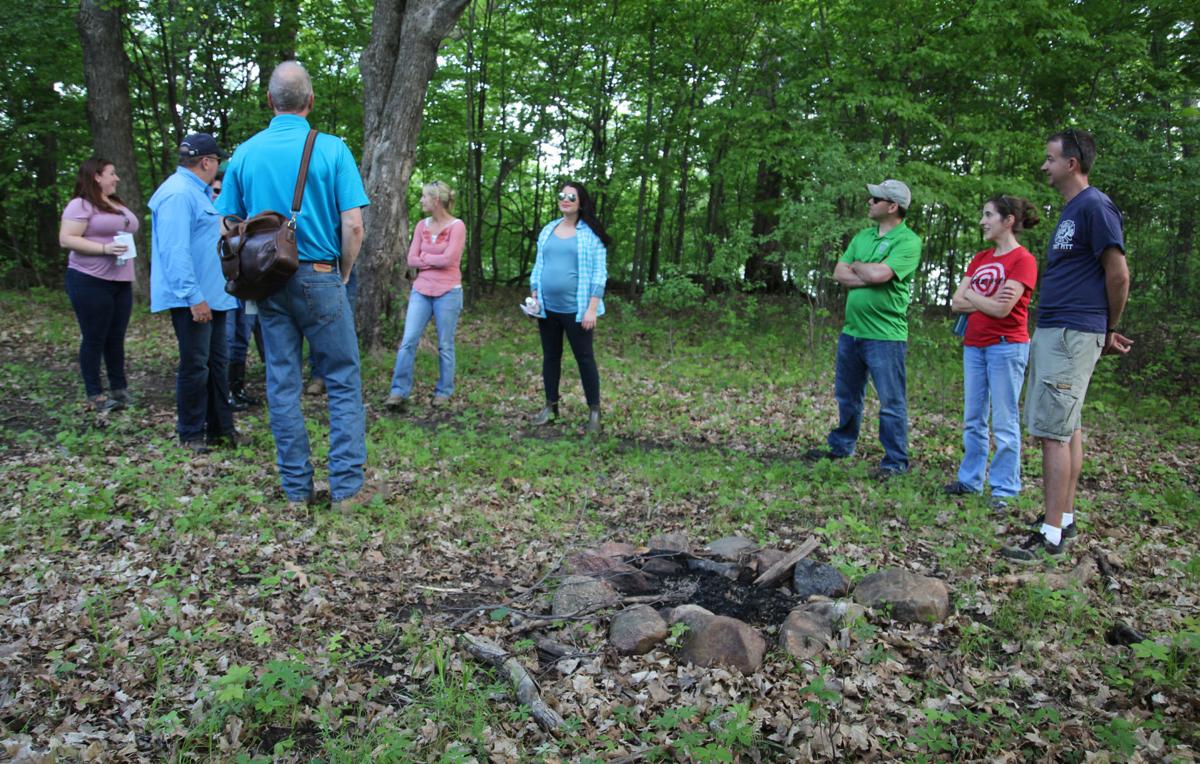 In the foreground, a well-used fire pit, created by visitors over the years. 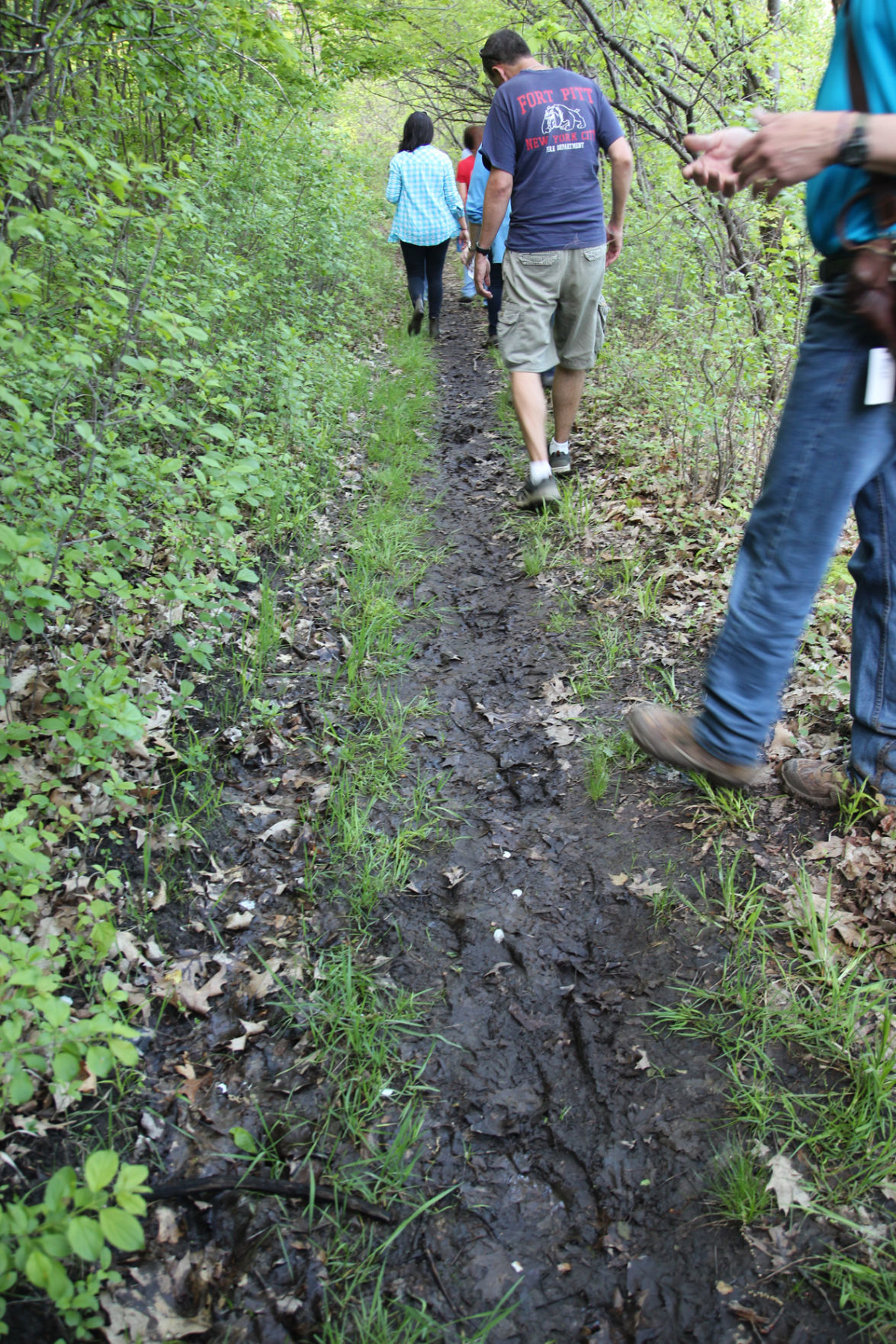 Plans for the extended trail include asphalt paths instead of mud.

Todd Hoffman, director of Parks and Recreation points out a trail sign near the entrance of the Lake Ann trail expansion, formerly known as the Prince property.

In the foreground, a well-used fire pit, created by visitors over the years.

Plans for the extended trail include asphalt paths instead of mud.

After hearing so much about the pristine land that once belonged to the late rock star Prince Rogers Nelson, nestled along Lake Ann’s western shoreline it was time to see the property first hand. The small group included Mayor Elise Ryan, City Councilor Julia Coleman and members of the Chanhassen Parks and Recreation Commission.

“The purpose of the walk was to introduce the (Parks and Recreation) commission to the future acquisition through the housing plat,” Hoffman said, in a later interview. “The commissioners had not had an opportunity to see it. Everybody’s wanted to get into the property to take a look at it.”

The Chanhassen City Council approved rezoning 191 acres of property along Galpin Boulevard on March 11. The move allowed Lennar to develop 169 homes on the property. And it also preserved 100 acres of of public parkland adjacent to the existing 100-acre Lake Ann Park, through park dedication valued at $980,000 and a density transfer of 22 housing lots from the park area to the westerly development.

Of the park expansion, 55 acres are wooded upland property and 45 acres are wetland. It includes 6,400 feet of wooded shorelines on both Lake Ann and Lake Lucy, according to Hoffman.

The weather for the May 29 tour was cool, bugs were nearly nonexistent. Above, the leafy trees provided a canopy from the late afternoon sun.

Hoffman led the group east, along the asphalt trail that goes past the fishing pier, to a city park and small sandy beach tucked just below the Greenwood Shores neighborhood.

From there, Hoffman led the way into the woods, by way of a well-worn path used by wildlife and nature lovers over the years.

One of the hikers commented that Prince didn’t mind if people walked the trails, as long as they stayed far enough away from his house.

Along the trail, at a narrow point, you can see Lake Ann to one side, and Lake Lucy on the other. And in the middle, someone had built a small fire pit, edged with rocks. It appears to have been well used over the years. And down the hill, on the shore of Lake Lucy, someone had placed a vinyl lawn chair. It looked like a good fishing spot.

Because of the wet spring, parts of the leaf- and twig-covered trail was spongy and thick with mud. Hoffman had advised wearing rubber boots for good reason.

The walk took the group 1.5 miles into the woods. Along the way, Hoffman brought the group to a clearing ringed by majestic old-growth trees. Hoffman called the clearing “The Cathedral.”

“Beautiful, isn’t it?” Hoffman said. With its leafy canopy soaring high above them, the group marveled at the natural sanctuary in the middle of the forest, and paused to take photos.

As the hike continued, Hoffman pointed out various stands of trees and brush, noting where the buckthorn had taken over, but would be mitigated in the future; an area where an entire area of elm trees had toppled over; and areas where the forest was slowly regenerating, decaying oaks being replaced by maples.

The hikers walked up to the Gorra property that lies to the south of the Lennar development and the Lake Ann park addition. The trail made a loop and then Hoffman led the group back toward the park near Greenwood Shores. Round trip, the walk was three miles from the Lake Ann public boat access.

According to the city’s comprehensive plan, the Lake Ann trail will eventually continue along the shoreline, back to Lake Ann, creating a complete path.

For now, the Gorra property is still privately owned. If the property is purchased by a developer for a subdivision, the city will have the opportunity to negotiate with the developer to extend the parkland and trail as it has done with Lennar.

Commissioner Meredith Petouvis thanked Hoffman for the opportunity in an email.

“The tour was fantastic. Thank you for negotiating with Lennar to allow it, and thanks to Adam and his team for scouting and bridge building.

“I’m so glad to have experienced it first hand,” Petouvis wrote. “What a spectacular piece of land we are now able to preserve, protect and enjoy!”

According to the staff report, “The goals of the future Lake Ann Park expansion plan is to preserve over 100 additional acres of shoreline, wetlands, and woodlands to the west of Lake Ann and Lake Lucy, including the land between the two lakes and to expand pedestrian trail routes and connections in the area.”

Hoffman said this will be three-month process over the summer, and the city is looking forward to involving the public and receiving input as the planning takes shape.