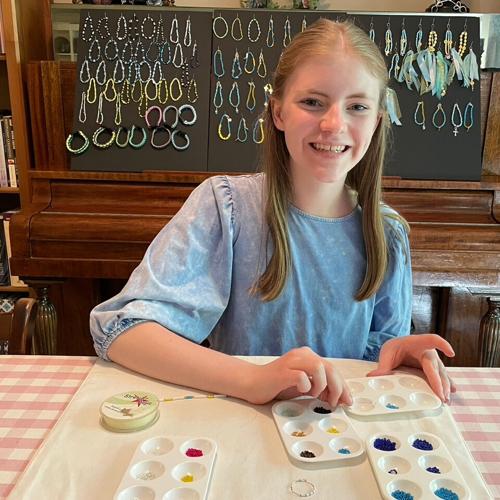 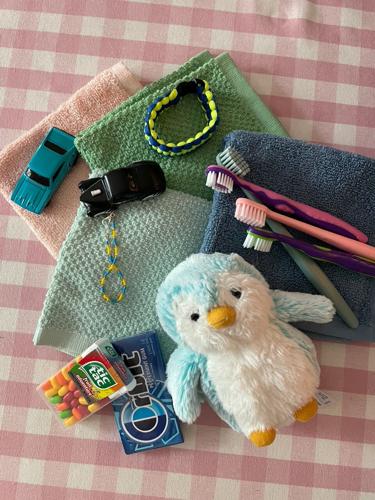 Anneliese is using the proceeds from her jewelry making to send money to Poland to help Ukrainian refugees. She is also making a few care packages for Ukrainian children that include items such as toothbrushes, bars of soap and a small toy.

Anneliese is using the proceeds from her jewelry making to send money to Poland to help Ukrainian refugees. She is also making a few care packages for Ukrainian children that include items such as toothbrushes, bars of soap and a small toy.

A colorful piece of handmade jewelry can be meaningful for many reasons. The jewelry that Anneliese Batdorf, 14, makes is especially significant.

Anneliese is an eighth-grader at Chapel Hill Academy in Chanhassen. Every year, eighth-grade students participate in a “capstone project,” which showcases who they are and what they are passionate about, said Ben Anderson, an English language arts teacher and one of the two capstone instructors.

The course encompasses four stages. First, students take personality tests and skills assessments. Second, students do research on an issue or injustice they care about. Third, they apply what they learned into a project or action. The last stage is reflection. Students then present to their class how the project made an impact on them and how it helped them understand God’s view of the issue, Anderson said.

“That’s a really rewarding process,” Anderson said. “We’re just listening to each other and enjoying the hard work of their friends.”

What Anderson enjoyed most about Anneliese’s project was that it was “driven by her heart.” It was inspiring for him to see someone in his class go above and beyond to make a difference within an issue. She spent multiple full weekends and school nights making her jewelry, he said.

“We love to see that sort of just excellent effort put in and that showcases her passion,” Anderson said.

Anneliese, a Chaska resident, is a crafty person. For her project, she decided to make jewelry for a good cause. Her mom, Shelley Batdorf, works for the missions organization Next Generation Mission. The organization was looking for ways to aid its partners in Poland that are helping Ukrainian refugees. Anneliese decided she wanted to help raise money to donate to the effort and to make a few small care packages for refugee children.

This issue hits close to home for Anneliese. She has distant relatives in Ukraine, which makes it personal, she said. She’s heard stories of refugee children and what they’ve had to go through with the war. She watched videos of children crying and it broke her heart, so she wanted to do something to help them, she said.

Through her project, Anneliese gained the support of some helpers. People came along and were interested in helping with her project. She has a “small army” of grandmas and friends that are helping to make the jewelry, Shelley said.

So far Anneliese has raised over $2,200 and has made more than 230 pieces of jewelry, which is the number she said she stopped counting at. If she didn’t have school or dance, she’d be making jewelry all the time, Shelley said. She has been enjoying her time making bracelets, necklaces and anklets, as well as paracord jewelry.

Going along with her gifts

Through her project, Anneliese has learned that no matter what age people are, they can make a difference in the world. People think that children can’t do a lot, she said, however she has seen what she was able to. She’s also learned a lot about patience and perseverance.

“There were times where I needed some problem solving or I just felt like giving up but I think that I was able to kind of persevere,” Anneliese said.

The capstone project has given Anneliese more confidence and has taught her to think outside of the box, Shelley said. It has also taught her what happens when there is a cause that people believe in.

For other young people who want to make a difference, Anneliese said not to listen to discouraging words. Young people are capable of doing amazing things, she said.

“Go along with your gifts and you can help through that,” Anneliese said.

Anneliese and Shelley have created a website where jewelry can be purchased, liliessparrows.com. The name for the website is inspired by a Bible verse that spoke to Anneliese. It reminds the people wearing the jewelry and the people receiving the money that they are loved and cared about, she said. She will tentatively be selling jewelry through the summer.

According to Anderson, in a lot of school classes, students are handed what they need to know from instructors. With the capstone project, it’s up to them and that freedom forces them to think for themselves.

“It really, I think, allows them to mature in their understanding of themselves and also to understand their capacity to make a difference,” Anderson said.

Some examples of other projects are a student who did an advocacy project on the topic of depression and a student who wrote a children’s book for children of families that are considering adopting another child.

To support Anneliese's cause and raise funds to aid Ukrainian refugees, visit liliessparrows.com.