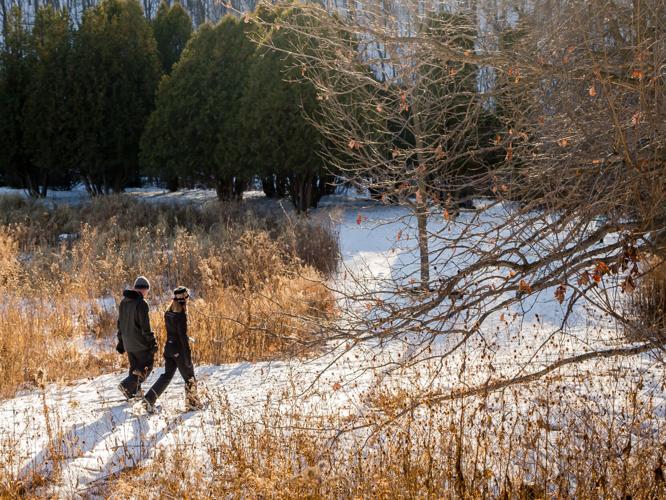 Trails for snowshoeing at the Arboretum meander through 1,200 acres of woodland, prairie, wetland, open fields and a few hilly areas. 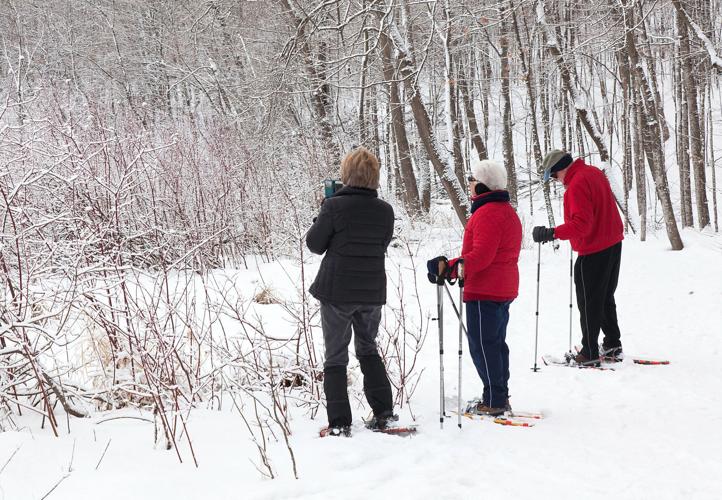 Snowshoeing trails are open at the Arboretum daily from 8 a.m. to 5 p.m. For those who rent snowshoes, they must be returned by 4 p.m.

Looking for a fun way to pass the time this winter? The Minnesota Landscape Arboretum in Chanhassen has just the thing. Give snowshoeing on the Arboretum’s eight miles of trails a try.

Snowshoeing is a great way to explore the Arboretum and see a different side of it, said landscape gardener Richard DeVries, who maintains winter trails, maple syrup production and restoration projects. Snowshoeing allows visitors to see areas where the normal trails don’t go.

“You can see a lot of nature, a lot of wildlife, a lot of birds and animal tracks,” DeVries said.

According to DeVries, snowshoeing gets visitors away from the crowded main garden areas. Snowshoe trails go through prairies, wetlands and mature Maple Woods and Big Woods.

During the winter it’s a lot easier to see wildlife such as deer and turkeys when there are no leaves or plants blocking the view, said DeVries, who enjoys snowshoeing.

“You see a lot of different things from a different perspective, like the silhouettes of the trees and just the evergreens really stand out or the red osier dogwood is just so bright against the white snow behind it,” DeVries said.

When doing an activity like snowshoeing, it’s important to keep safety in mind. People are surprised by how big the Arboretum is (1,200 acres) and people do occasionally get lost, DeVries said. It’s good to become familiar with the area by looking at maps or brochures. The Arboretum also offers a digital map, which shows the user’s location, accessible on smartphones.

Since the Arboretum doesn’t have a ski patrol staff, it strongly recommends that people don’t ski or snowshoe alone.

The Arboretum’s website is kept up-to-date with trail conditions at arb.umn.edu/winter. While snowshoe trails aren’t groomed, fresh snow is packed down pretty quickly by early birds who want to be out in new powder.

DeVries recommends snowshoeing on a day that isn’t too warm. His favorite time to go out is when the temperature is about 20 degrees. It’s warm enough to enjoy snowshoeing, but cold enough that everything is still frozen, he said.

Snowshoeing under a full moon

The Arboretum also offers after-hours full moon snowshoe events with upcoming treks in February and March. The events are a look at the Arboretum after dark and include bonuses such as bonfires and hot cocoa.

Tickets for the events are $5 for members and children aged 15 and under, and $20 for non-members. For more information about full moon hikes, visit arb.umn.edu/FullMoonHikes.

Snowshoeing at the Arboretum

Price: Snowshoe rental is available on the second floor of the Oswald Visitor Center and costs $7 for the first hour and $5 for each additional hour.