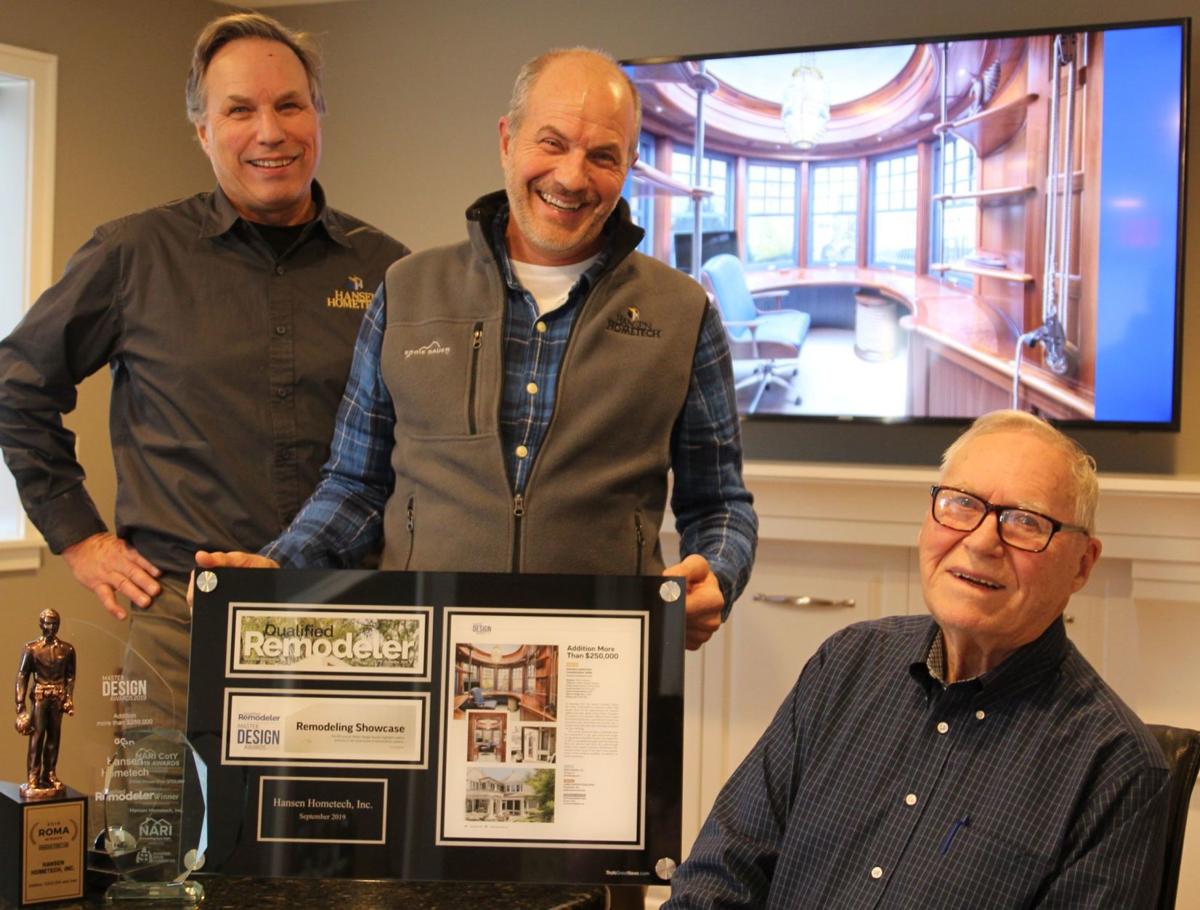 The Hansen family is one of the city’s earliest home builders. From left, brothers Steve and Gary Hansen, and Doug Hansen, their dad and founder of Hansen Hometech, Inc., Chanhassen. The video screen is a shot of their 2019 award-winning remodel on Lake Minnetonka. 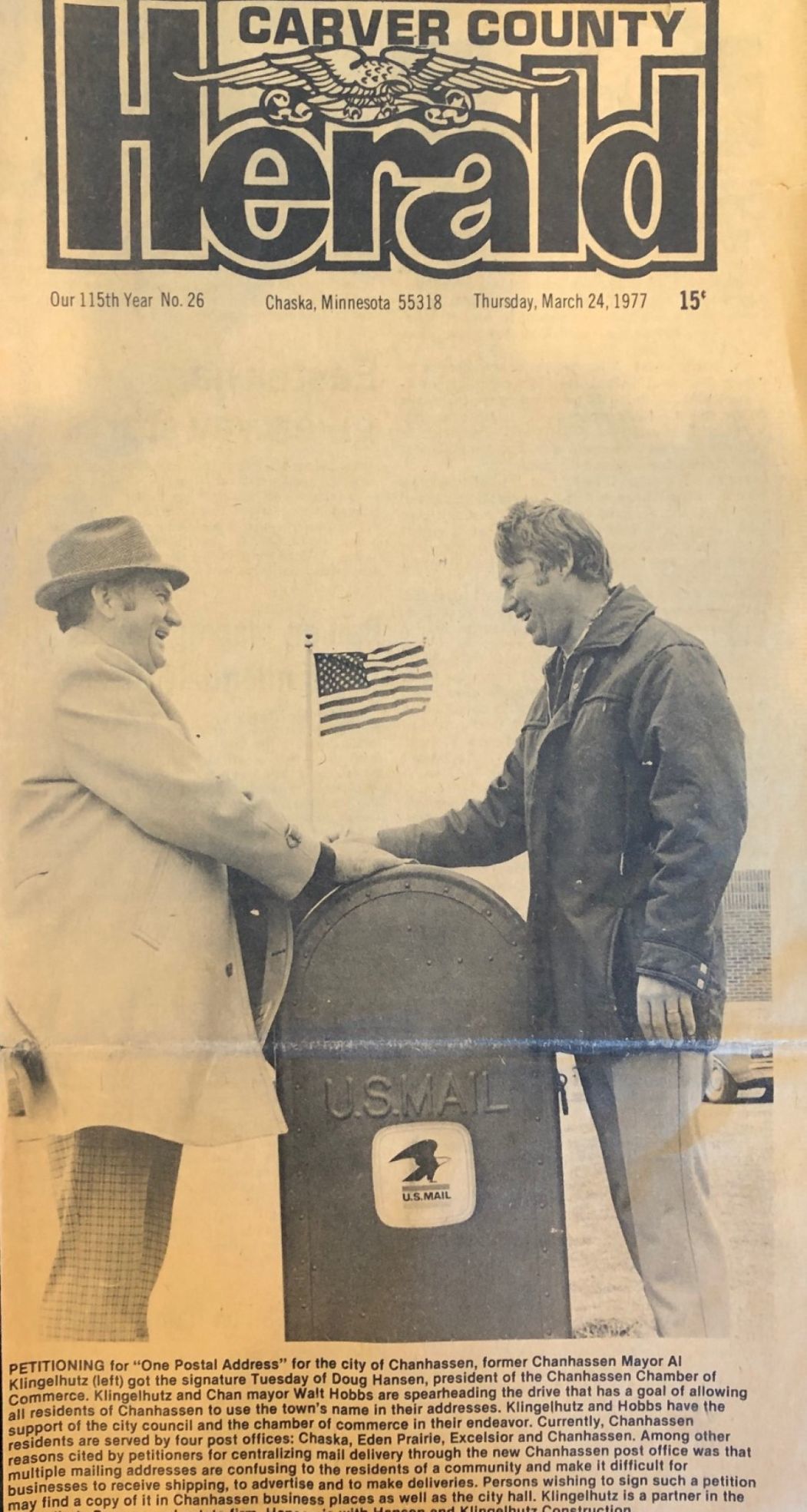 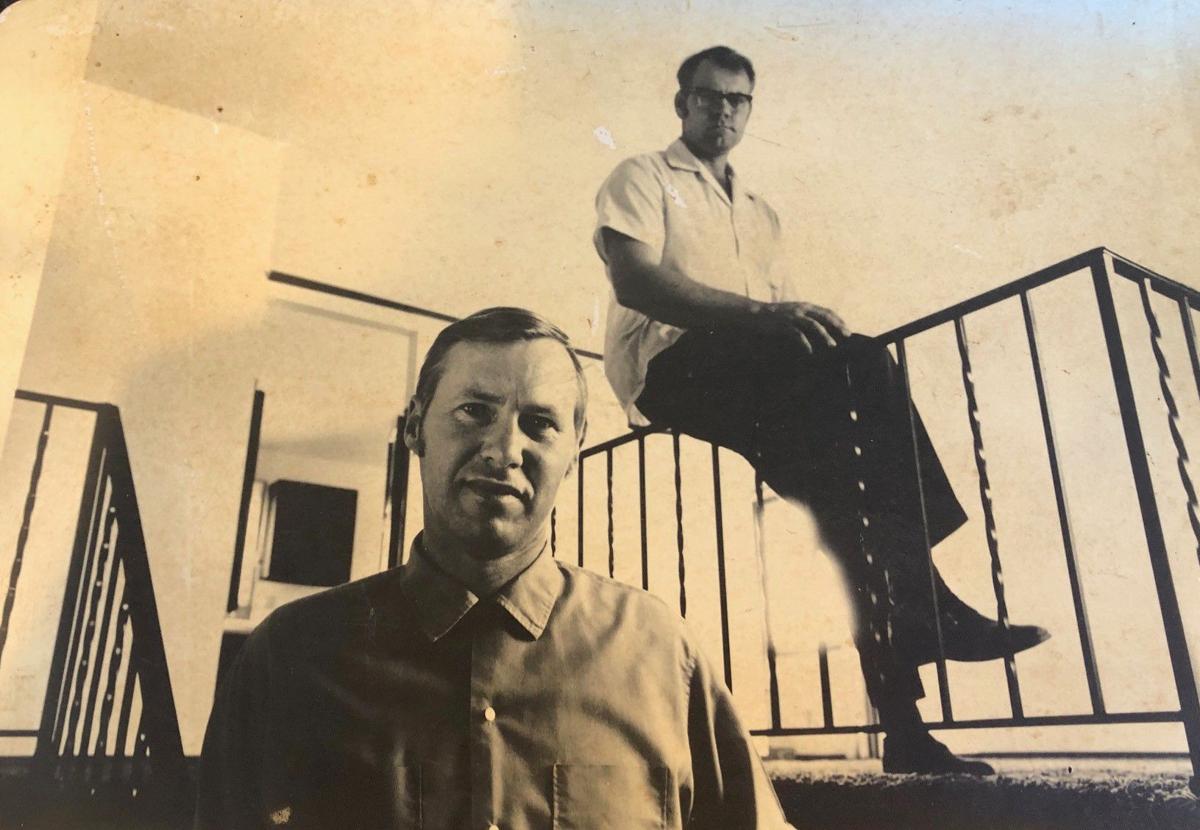 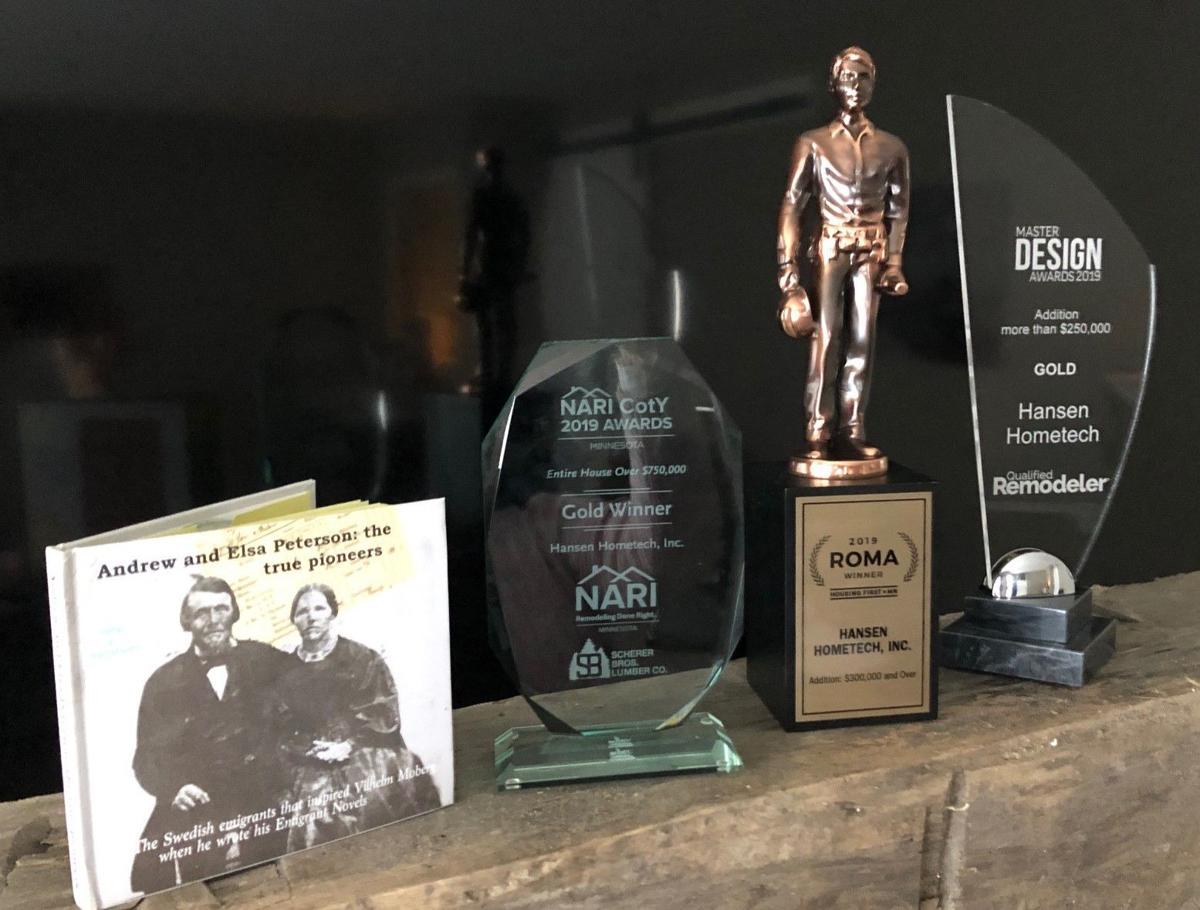 The Hansens head an award-winning home builder and remodeling company.

The Hansen family is one of the city’s earliest home builders. From left, brothers Steve and Gary Hansen, and Doug Hansen, their dad and founder of Hansen Hometech, Inc., Chanhassen. The video screen is a shot of their 2019 award-winning remodel on Lake Minnetonka.

The Hansens head an award-winning home builder and remodeling company.

Doug Hansen smiles, remembering his early partnership with Tom Klingelhutz. He and his two sons Steve and Gary looked back at the history of their construction company — now Hansen Hometech — on a recent morning in their office conference room at 7920 Kerber Boulevard.

“We were the guinea pigs, when we started developing in Chanhassen in the 1960s,” Doug Hansen said. He and Klingelhutz worked as builders at Ecklund & Swedlund Homes in Minneapolis, where Doug began as a truck driver, then moved into an apprentice program. That was interrupted by a tour a duty with the U.S. Army in Korea.

Soon after Doug returned, he and Klingelhutz started Hansen & Klingelhutz Construction, incorporating in 1963. The partners bought up 100 acres from Chanhassen farmer Pat Kerber, off Laredo Drive in a section of town known as Highland Park, north of Chan View Street, between Powers Powers Boulevard and Frontier Trail. The first home they built was a three-bedroom rambler with a double garage and fireplace which they sold for $19,900.

While local entrepreneur and developer Herb Bloomberg is well known for establishing Chanhassen Dinner Theatres and his own residential development between Lotus Lake and Highway 101, Hansen and Klingelhutz should also be acknowledged as building the residential backbone of today’s older and established downtown neighborhoods. They eventually sold part of their property north of Chanhassen City Hall to the city, resulting in City Center Park and Hansen Ball Park. The partners also donated the pond, now called Kerber Pond, along with the land and trail access at Laredo Drive.

The partners built Chanhassen’s first apartment building in 1966 — a 12-unit at 410 Chan View, which the Hansens manage to this day. Hansen recalled talking to Chaska banker George Klein and his colleague, looking for a loan.

“After I gave them my presentation with plans and specs and costs, George’s partner said, ‘We can’t possibly lend you that much money.’"

There was a pause. The partners waited. Then George Klein spoke.

“We will help these boys.”

The Hansen & Klingelhutz Construction company went on to build a residential development north of Highland Park.

While the company built primarily in Chanhassen, they also built homes in The Preserve in Eden Prairie and the "New Town" of Jonathan in Chaska. The Center Green Townhome project in Jonathan was 1970s contemporary, fashioned after West Coast styles with rough hewn wood, lofts and angular roofs. The four models were furnished from Dayton’s.

The company built Santa Vera Apartments and a warehouse for their company at 7920 Kerber Boulevard, where they are located today.

“I remember forming the thick walls of the two-story bank vault with steel rods,” Hansen said. “We poured the walls ourselves and had to build clay ramps for the Ready Mix trucks to get up that high.

Although Hansen and Klingelhutz later ended their company partnership, they continued to work together. And when Hansen’s two sons Steve and Gary were old enough, they joined him and the business.

Both sons worked in construction with their father from a young age. Both graduated from Minnetonka High School and Steve studied mechanical drafting at Hennepin Technical College at the Eden Prairie campus.

They joined their father in business, first as Hansen & Sons, then incorporating in 1986 as Hansen Hometech, Inc. They divvied up responsibilities, with Doug overseeing finances, Steve doing estimates and Gary overseeing production.

“We had a unique education,” Steve said. “We always worked with really good subcontractors and trades people and learned a lot from them.

“In today’s market, we really wish there were more young people getting into the trades,” Gary said. “Neither of us went to college — besides Steve going to tech. Instead, we did what you could call old-fashioned apprenticeship. What people don’t realize is you can make a good living. You don’t have to go to college.”

The Hansens aren’t the type of folks who do a lot of self promotion. They admit they probably should, but much of their remodeling and light commercial construction business comes from word of mouth or repeat clients.

“We specialize in home updates and remodels,” Steve said. “We’re good at fixing people’s houses and dealing with people when they remain in their homes while the work is going on.

They've done a lot of updates, remodels and additions on the early homes built by Hansen & Klingelhutz.

“I’ll be at someone’s house and they’ll pull out the old plans,” Steve said, “and I’ll remember drawing them up back in vo-tech. I must have done some 50 building plans. I don’t mind working (remodeling on Hansen and Klingelhutz homes. They were really well built.”

Despite their low key approach of marketing themselves, their work speaks for itself.

But among the projects they’re proudest of is work they’ve done with the Carver County Historical Society in the restoration of the historic Andrew Peterson North Barn near Waconia.

“We liked the challenge,” Steve said. “Now we’re working on the big middle barn, and would eventually like to roll into the house. But it’s a challenge when you’re working with grant money. But, it’s rewarding that the county wants to keep it. It’s such a historic property and the grounds are beautiful.”

Although Doug Hansen stepped away from the business in 1995 when he moved to the Green Lake/Spicer area, he still stays involved. He has an apartment in Chanhassen and does maintenance on the apartments at Chan View and Santa Vera.

“We have done some amazing projects,” Doug said. “It has been a joy to be able to work with my sons all these years and I cherish any time I can still be with them.”

A before and after of a home remodeled by Hansen Hometech, Inc., Chanhassen, Minnesota.