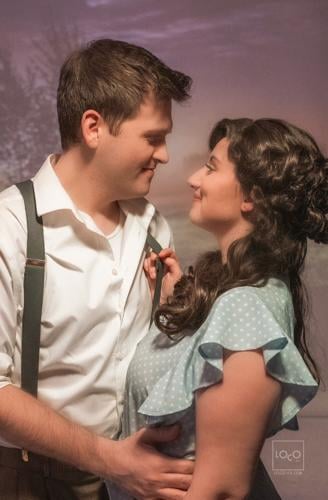 Brie and Austin Stole play opposite each other in the Chaska Valley Family Theatre’s production of “Bright Star.” 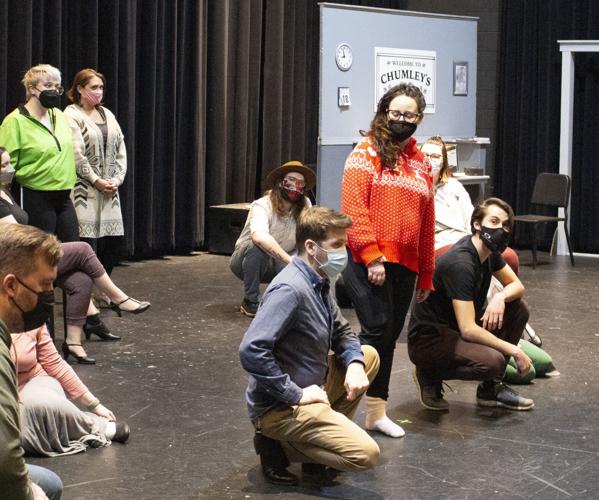 Austin and Brie Stole, pictured at left and center, rehearse for the upcoming production of “Bright Star,” which will be at the Chaska Community Center Theatre from March 10-27.

Brie and Austin Stole play opposite each other in the Chaska Valley Family Theatre’s production of “Bright Star.”

Austin and Brie Stole, pictured at left and center, rehearse for the upcoming production of “Bright Star,” which will be at the Chaska Community Center Theatre from March 10-27.

The lead actors in the upcoming musical “Bright Star” have great chemistry on and off stage.

Married couple Brie and Austin Stole will play opposite each other in the Chaska Valley Family Theatre production, March 10-27.

The Stoles (Brie is originally from Chaska; Austin Stole from Waconia) were a match made on stage.

The couple, who now live in Bloomington, met playing opposite each other in “Catch Me If You Can” in 2016. They started dating shortly after and then performed in “Legally Blonde” together. They got engaged when they were performing in “The Hunchback of Notre Dame.”

Brie said that every time they do a show together a major life event happens. The Stoles got married in 2019 and “Bright Star” will be the first show they have done together as a married couple.

The musical follows Brie’s character Alice Murphy. Living in the American South, tragedy befalls her in the 1920s. The show flashes forward to the 1940s to show how it has affected every avenue of her life and those around her. Austin plays a love interest named Jimmy Ray Dobbs.

The story is about redemption, pain and love, Brie said. Despite the tragedy of the show, the messaging is uplifting and enjoyable. Audience members will leave happy, Austin said.

“It’s just kind of one of those shows that just stays with you for a long time,” Brie said.

The musical is inspired by a true story and features a Tony-nominated score by Steve Martin and Edie Brickell featuring toe-tapping bluegrass music. The show will be performed at the Chaska Community Center Theater, 1661 Park Ridge Dr., Chaska. Tickets cost $20 and student/senior tickets are $15. Tickets can be purchased online at cvft.org.

COVID-19 vaccination or a negative test taken within 72 hours of the show are required for audience members. Masks are also required regardless of vaccination status.

“Bright Star” has quickly become one of the couple’s favorite musicals. Being able to share the story and sing the music with not only each other, but also some of their closest friends in the cast, has been a rewarding experience, Brie said.

“It just feels like such an incredibly supportive and kind community, all working together to produce something that we all just really love,” Brie said.

According to Austin, Alice is the show, performing 12 musical numbers. The role showcases Brie’s acting chops, since the musical takes place in the 1920s and 1940s and she must portray a teenager as well as a woman in her late 30s. The music is also challenging, especially for her role, he added.

The characters Alice and Jimmy carry the weight of a tragedy. Austin sings a song called “Heartbreaker” that makes Brie cry every time, because he delivers it so authentically, she said.

For this specific musical, being a married couple has been helpful in developing the roles. In other shows, it can be a challenge, since they’re comfortable together and need to play characters that have just met, Brie said.

“For the rehearsal process, we already have that chemistry together,” Austin said.

Austin identifies as a singer first and actor second. The fact that he and Brie already have chemistry in their roles makes it easy for him to dive into the character more naturally, he said. Brie is just the opposite. She is an actor first, so it’s nice for her to work with him as a scene partner and not have to worry about stepping on his toes, she said.

“I can say like, ‘Hey, can we try this a little bit differently’ and he’s not going to get offended,” Brie said. “We’re a team that’s working towards the same goal and there’s no like ego that gets in the way there.”

Acting together in a show is something unique they get to share that a lot of other couples don’t have, Austin said, adding they are fortunate that they have the same passion. It’s exciting to work on something that is creatively and artistically stimulating together, Brie said.