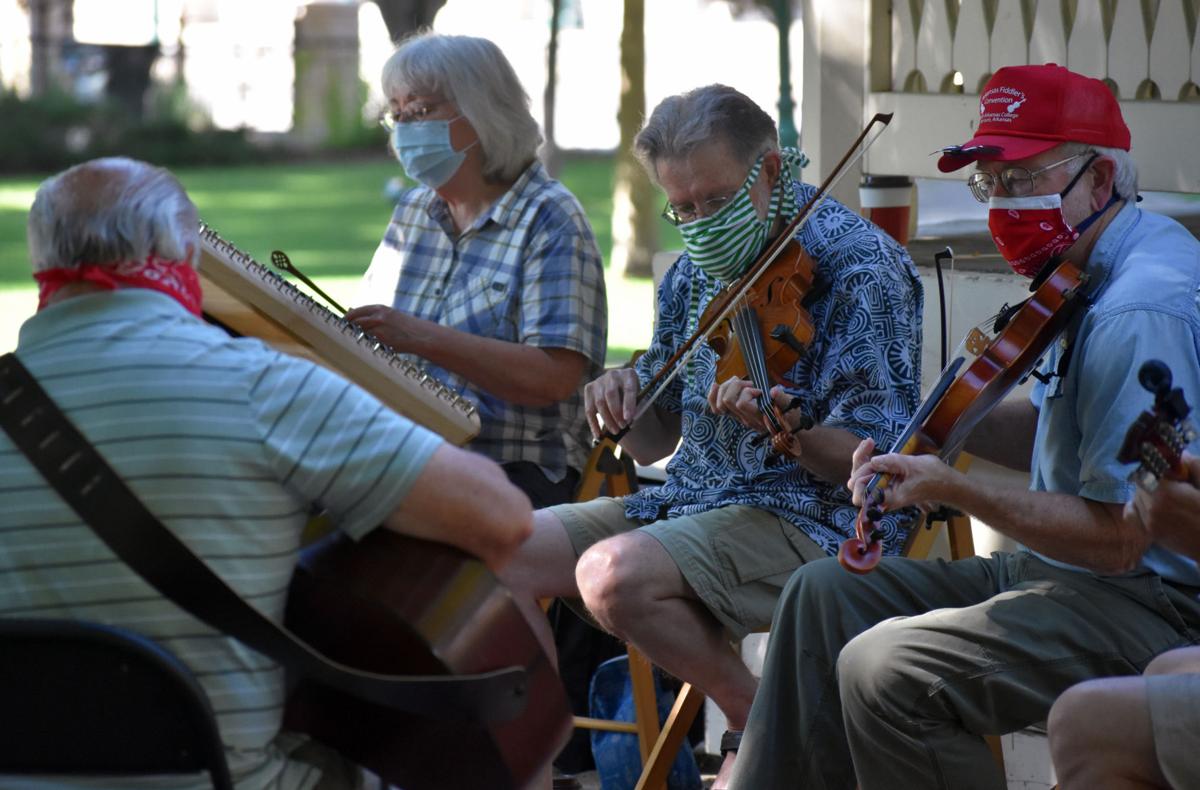 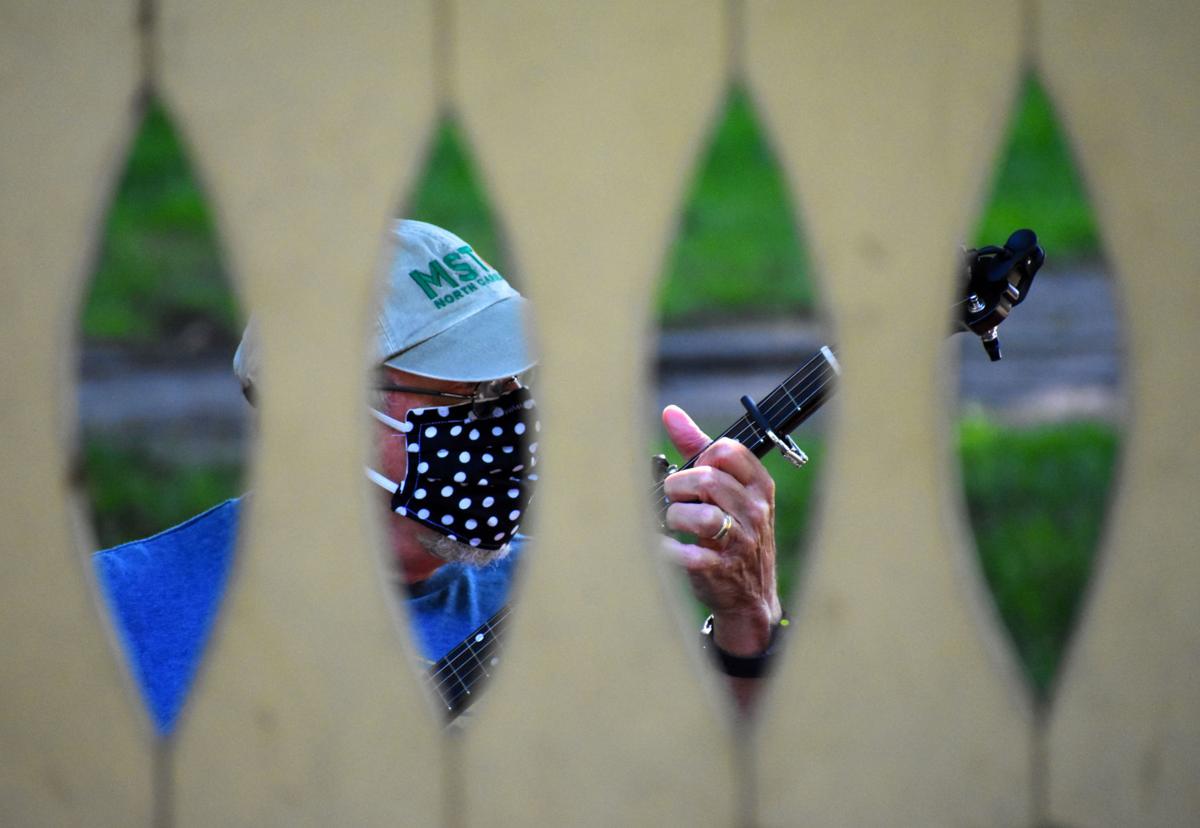 Claud Houge works his banjo outside the pavilion at City Square Park. 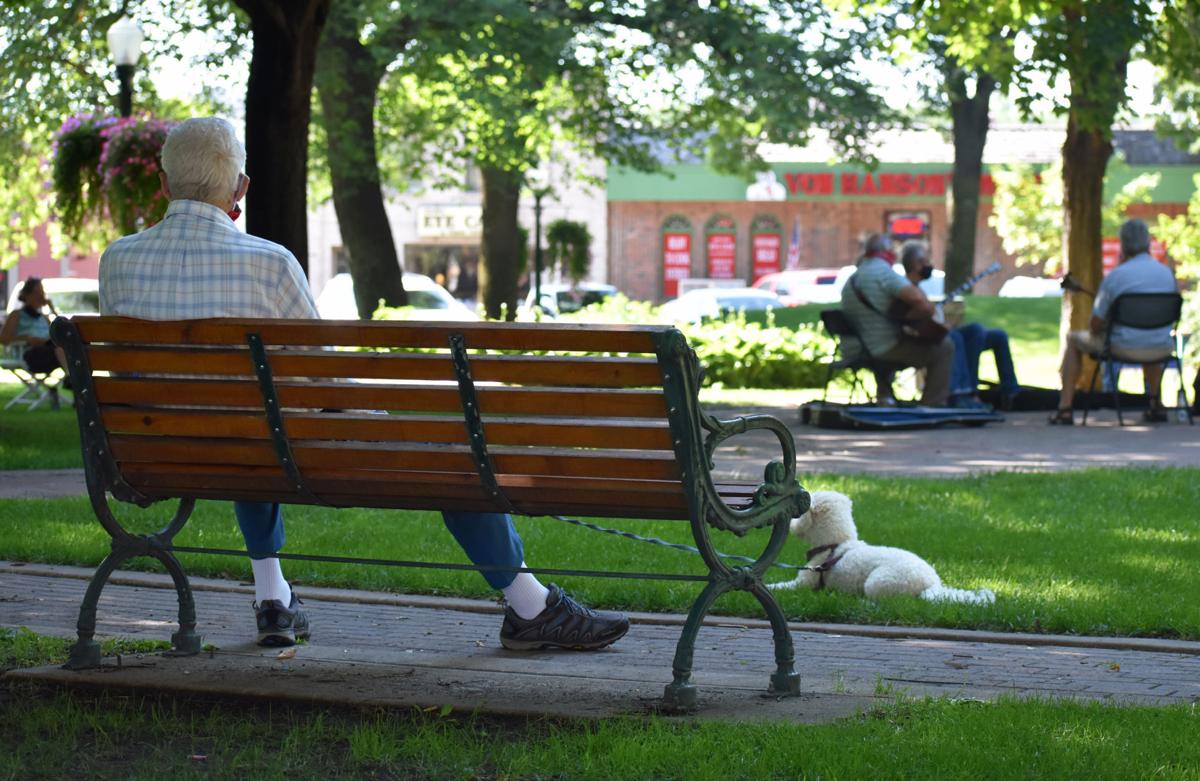 Bruce Boyer kicks off a tune with his fiddle, which are structurally the same as violins but reflect a more folk-based music.

A toddler dances; a couple sets up a picnic. Across the pavilion, a woman cradles her dog while another settles on a park bench with a book.

They might all be strangers, but their ears are likely all hearing the same thing: Old-time music, or North American folk music.

And, adding a word that might seem foreign in COVID-infused times: Old-time live music.

MASKS ON, STRINGS OUT

A jam group of fiddlers, banjoists and dulcimer players gather in Chaska’s City Square Park on Saturdays, meeting for a few hours to play and enjoy music together.

Around a dozen masked musicians park their cars in the nearby diagonal spaces, music case in one hand, folding chair in the other. They trickle in, some before 10 a.m. and others some 30 minutes later. Joined in a somewhat socially-distanced circle, one will start off a tune and they’re off.

It’s nothing fancy nor structured, said fiddler Bruce Boyer. He even hesitates to call the group a “band.”

When he and his wife Lois, who plays the hammered dulcimer, moved from California to Chanhassen they looked for a way to keep playing music.

Turns out, they weren’t alone, especially when the pandemic hit.

Musicians from as far as a two-hour drive south of Chaska make their way to the park for casual jam sessions. It’s something Boyer calls a “response to desperation.”

Claud Houge knows that feeling all too well.

The Eagan banjoist met Boyer through a church event several years ago. Thanks to him, Houge picked up the banjo, though he’d played guitar for many years prior.

“There’s something about us sitting in a group of people who love the music, who love the community that music generates,” Boyer said. “I just think there’s nothing like that, that you can generate on your own.”

While “on-your-own” activities are all too common amid the pandemic, it’s a tough selling point for musicians. For the informal weekly group, they figured they could play it safe while still itching that music scratch.

Bruce and Lois Boyer tend to show up a little bit before the roughly 10 a.m. gathering time, Red Bench Bakery treats and coffee in hand. Maybe they’ll tune or socialize with other musicians at a distance.

Once a few more string players show up, mostly fiddlers, someone will pick a key and a tune. It doesn’t matter if some people don’t know the song — in fact, the casual nature of it all is a defining feature.

“We start when people show up and we end when everyone’s gone” is their motto, a band mate said with a laugh.

Old-time music relies on musicians to not overpower each other. Everyone plays at similar volumes and doesn’t use the group as backing to a solo.

“The thing about old-time music that it’s not — nobody’s in the spotlight,” Houge said.

The fiddle usually starts everyone off, then everything seems comes naturally.

“Before you know it, you’ve got a song rolling along,” Houge said. “I just try to keep up.”

Songs include centuries-old standards, like the well-known “Soldier’s Joy” or “Yellow Rose of Texas.” Houge said some of the tunes are 800 years old, and many hail from different parts of the world.

When a song wraps up, someone will put their right foot out. Rather than an attempt to trip their jam-mate, it signals one more round.

It’s something Houge wasn’t used to. Saturday was his first jam with the group. He said he was anxious at first. How would people view his playing? How well would he perform?

“It is just listening and seeing what happens. I had no idea and there’s no playlist or anything like that,” he said.

Bruce started hearing his circle talk about playing in late May. When June entered the scene, COVID restrictions changed just enough where he thought people might be keen on playing.

That combined with the ever-frustrating collaborating-over-a-Zoom-call-together dilemma and the idea was born.

“I just put out an email,” Bruce said.

It sounds simple because, well, it sort of is.

He calls the group, which has been together for several weeks now, a “conglomerate” of people. Some had gathered for years in various smaller jam groups. Others hailed from the Minnesota Bluegrass & Old-Time Music Association.

At the end of the day, friends of friends got the word out and met for a pickup session.

“Before you know it, you’ve got a song rolling along."

After a while, a Facebook group entered the picture but their best marketing is word-of-mouth. If someone has a fiddle, banjo or guitar, to name a few, they’re welcome to join.

Participants hail from the Minneapolis and Saint Paul area and around the southwest and south metro.

Though state guidelines recommend people limit exposure to those outside their home, Houge said their Saturday sessions are “probably about as safe as you can get.”

He did consider the situation, with many of the players older rather than younger. And jam groups like these tend to lead instrumentalists to sit close to one another.

But he said everyone understands they can’t sit too close to each other and they need to wear masks — something that’s easier to do for string players. Plus, nobody sings, which reduces airborne risk of the virus.

“I think people were very respectful of one another’s distance,” Houge said.

A handful of park-goers accompanied by tapping feet trickled in, staking out a park bench to take in the music. Musicians said the community response has been great.

As for the players, some are waiting for that moment musicians who play in groups know well.

“(Where) the tune just kind of takes over,” Houge said. “It’s just kind of something that has a life of its own almost.”

Jam groups are typically just that — a space for music-lovers to come together, at a safe distance, to give music life.

Whether for the people in the park enjoying the tunes or the players themselves, that goal seemed well-achieved.