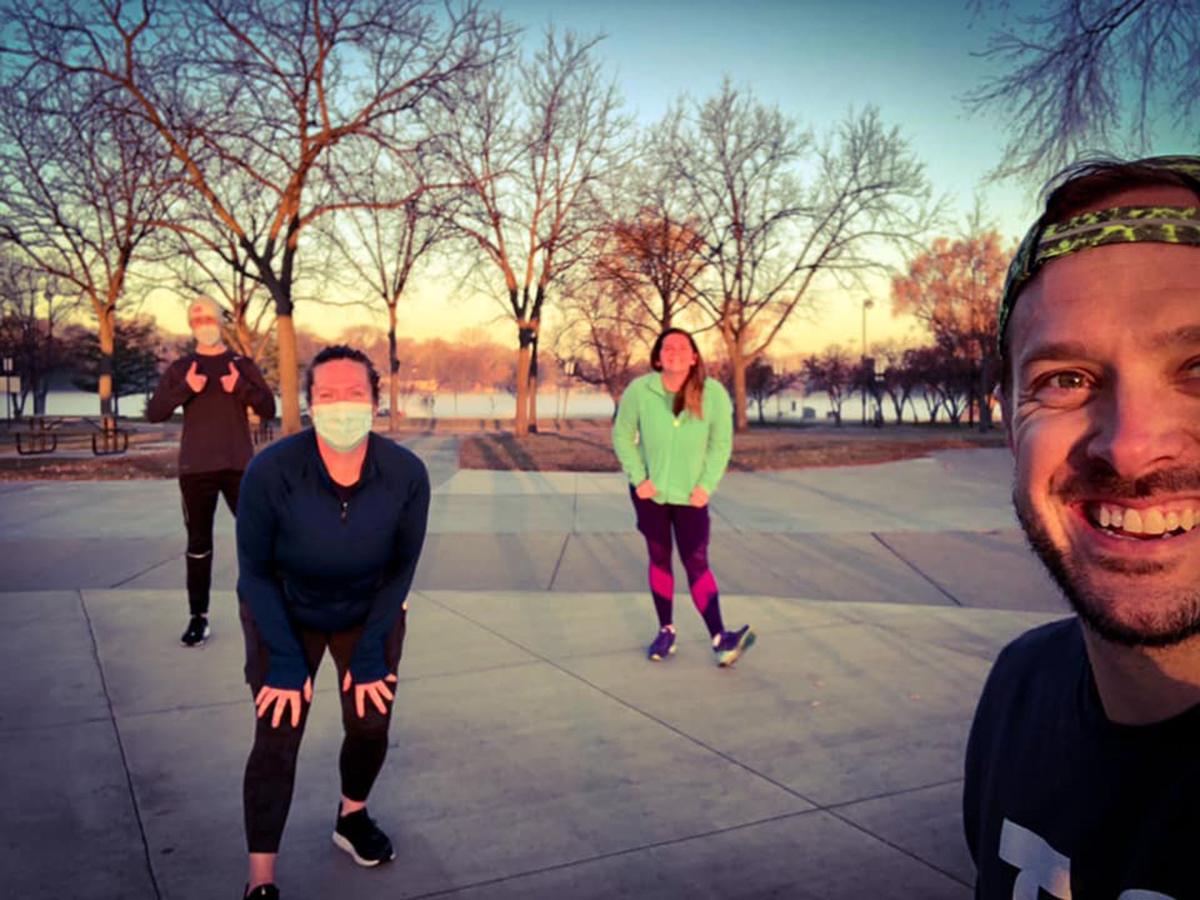 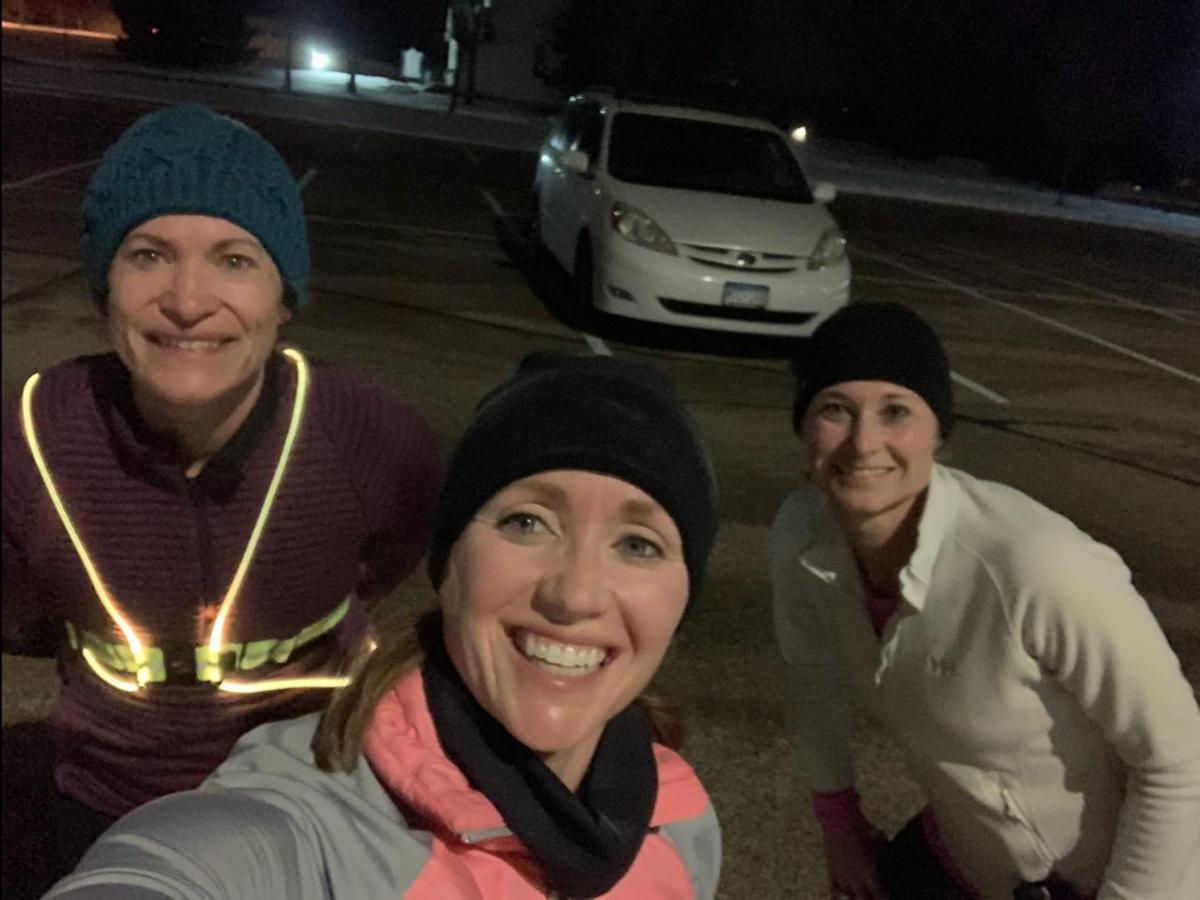 Chaska runners smile ahead of a 5 a.m. run in a local school parking lot.

Chaska runners smile ahead of a 5 a.m. run in a local school parking lot.

Growing up, running a mile for school gym class was her least-favorite day.

Now, Jacquelyn Ballard Vranicar wakes up at 4:15 a.m. once a week, downs a cup of coffee, and runs a 5K.

She’s joined by a handful of people, some days less, with one goal in mind: Move a little over three miles while talking with a stranger.

It’s part of a network called 5K Everyday Conversations, founded by St. Louis Park resident JC Lippold. At the onset of 2020, he started hosting runs — mostly early-morning — across the metro.

“My curiosity was if we had space where people could move at a conversational pace, would people show up?” he asked.

Well, they did. With almost 1,000 Facebook group members and 300-some runs down, people meet in Minneapolis, Edina, Maple Grove and, most-recently, Chaska.

Lippold said the group (or “movement,” as he prefers) is for everybody: runners, walkers, and people who just want to meet someone new. He stays away from conversation prompts and lets the dialogue do its own thing, often leading to deeper chats about current events or mental health.

“It’s not rocket science. It’s simply providing space where people can feel welcome to, No. 1, hold conversion with people they don’t get to every day, and two, to move,” Lippold said.

Avid runner Ballard Vranicar said she found out about 5K Everyday Conversations this fall and wanted to join, but at the time there were no local options for people in the southwest metro.

So she reached out to Lippold and started a Chaska chapter a little over a month ago. Every Thursday at 5 a.m., people gear up with reflective clothing or lights, tennis shoes, and warm layers at the La Academia school parking lot.

Seem excessively early? Ballard Vranicar and others say it’s the perfect time. She has four children at home, so running then is her go-to.

“For me and most of the people I run with, it is the only time that we have time for ourselves,” she said.

Betsy Maus, also from Chaska, said though she’s typically active that early, that’s not the point of 5K Everyday Conversations. It’s a "safe place" even for self-described night-owls, she said.

“Non-runners are welcome. People who have never woken up at 4:45 a.m. are welcome,” she said. “Just because we get up (early) four to five times a week to run doesn’t mean this group does.”

Lippold said even the term “runner” or “run” can, well, send people running the other way.

“There’s something really unhealthy about the way we perceive who movement is for,” he said. “We never will say, ‘I’m not a sitter; I’m not an eater; I’m not a walker.’ We won’t use any other verb as this separation from our full capacity.”

He suggests people stop using the words “only” and “just” to describe themselves. Embrace yourself first, Lippold said.

Halfway through the initiative, Lippold had to rethink daily 5K plans.

Could people still meet up, or would the runs and conversations need to go virtual?

The group switched to daily, 30-minute Facebook Live conversations meant to move people toward a healthier mindset and foster dialogue. People could listen to guest speakers virtually while they walked, or take that inspiration with them later in the day.

Suddenly, the group took off.

Lippold said runners across the state and country joined in, opening laptops to six-hour (and longer) conversations and livestreamed mental health talks. Soon enough, he set up virtual 5Ks and marathons for people to do on their own, relieving to those not able to work out in a gym or with others.

“When it’s cold we’re all wearing masks anyway,” Ballard Vranicar said. “We give each other safe enough space. We’re not running at a speed we need to be so close.”

That pace is key, Lippold said.

“What people are showing up for first is conversation. In essence, we’re transitioning this idea of, ‘Oh, let’s go grab a cup of coffee,’ to, ‘Hey, let’s go run,'" he added.

Maus said that mindset has brought folks together who wouldn’t have otherwise met, let along have a heart-to-heart. She could run anywhere, but this group goes above and beyond for her.

She’s used to talking about home life or catching up after a weekend with her usual running partners. That’s just a starting point for 5K Everyday Conversations.

“We talked about big things (like) social inequalities,” Maus said of a recent run. “It was kind of cool to have a different level of depth of conversation.”

Maus says she was in awe the first time she ran with this cluster of people. Ballard Vranicar called it a gift you can give to yourself. Lippold says it’s a way to engage with other people’s stories purposefully.

“I’m not a fast runner. I’m not someone who has a great affinity for winning the prize,” he said. “But there’s no environment I’d rather be in than being around people that feel like they’re doing something that’s truly changing their life.”

Updated information and schedules can be found on 5k Everyday Conversation's Facebook page.