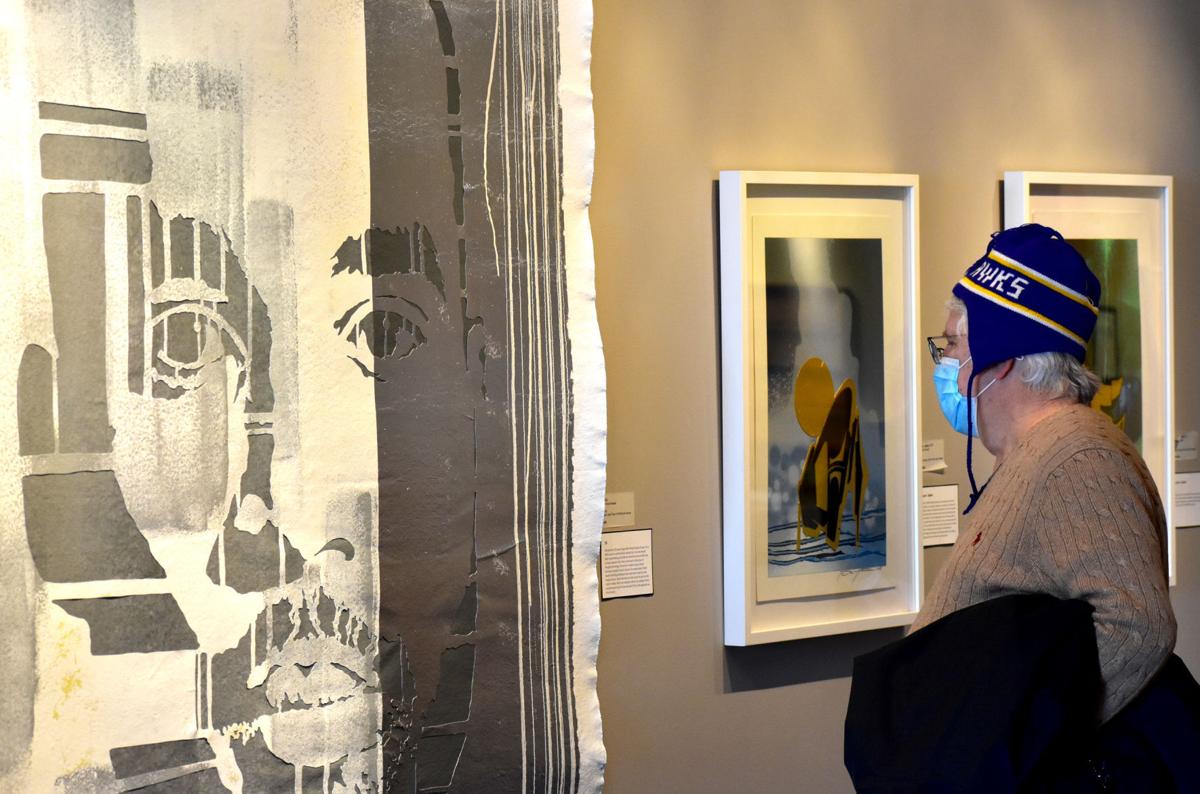 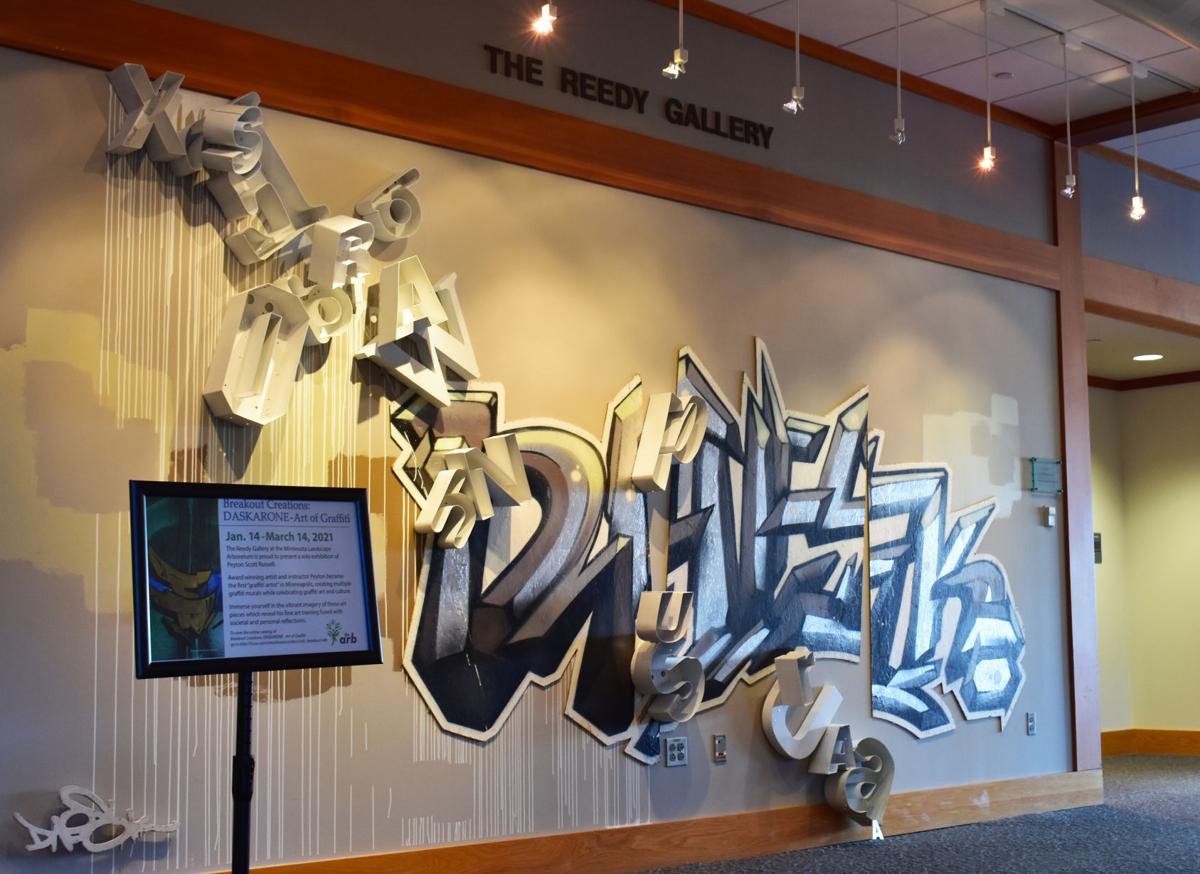 One of Peyton Scott Russell’s installations, featuring dripping and buffing techniques, is displayed front and center at the Arboretum’s Reedy Gallery. 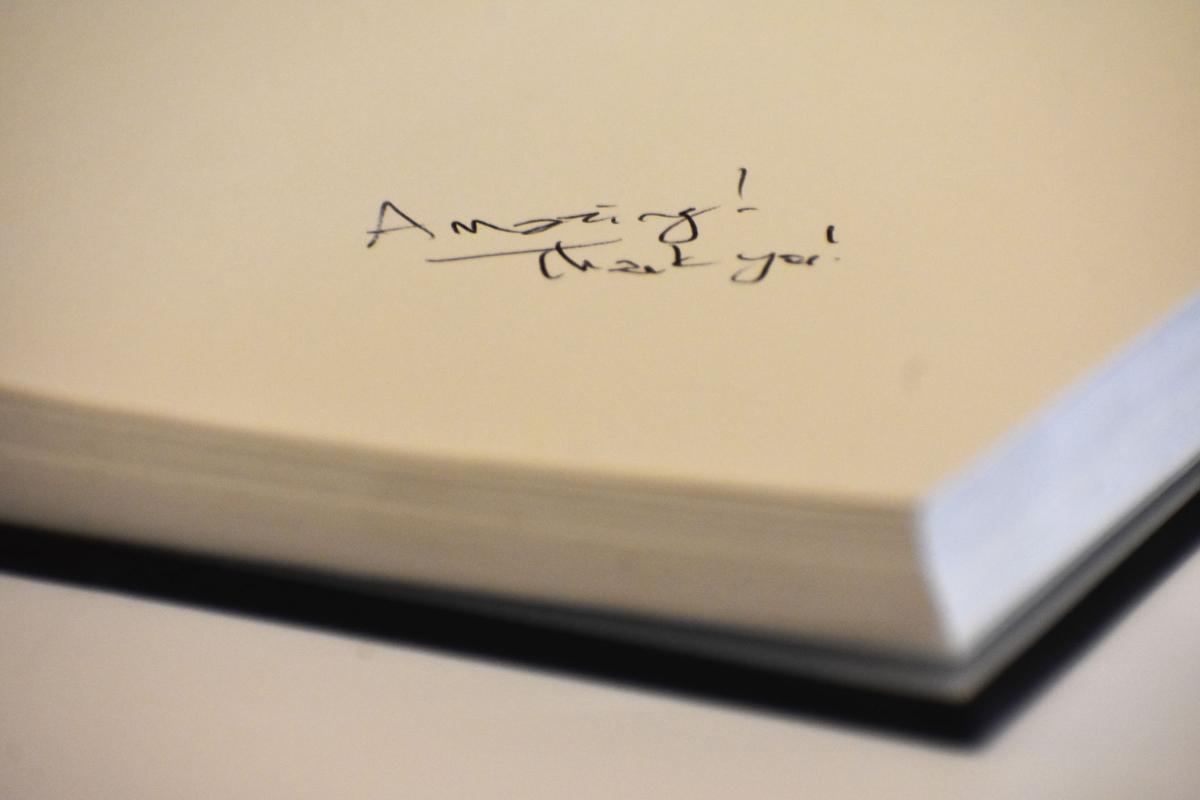 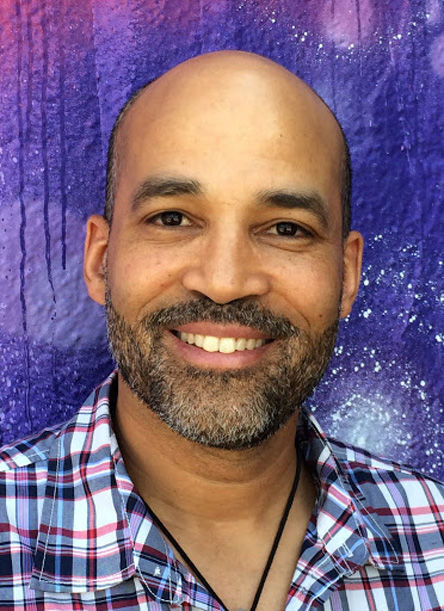 But instead of those well-known for their musical talents, Peyton has honed in on something else thing for three decades.

More specifically, the Minneapolis-based father of two and Bush Fellowship recipient is recognized internationally for his graffiti art. It’s something he calls a “hard, urban and artistic” voice.

That voice makes its way into the Minnesota Landscape Arboretum in Chanhassen this year, a whole area filled with large-scale works and a multimedia experience to boot.

Typically with a handful of exhibitions each year, the themes might not immediately jump out as graffiti-friendly, but the Reedy Gallery is about “outdoor landscapes” inspired by nature, according to the Arboretum’s website.

All that Mother Nature talk comes with a broad definition: “Eclectic interpretations of nature’s beauty.” It’s what gallery curator Wendy DePaolis saw in Peyton’s work and why she wanted to show it.

She knew Peyton was inspired by abstract expressionist art and the “ephemeral” life of graffiti. It ties into natural life cycles. She mentions how graffiti has an important part in the “historical canon” of art.

“There’s only so many botanical art shows I can do in one year,” DePaolis says with a laugh.

'COMPLETELY AMERICAN IN EVERY WAY'

Peyton hopes his work shakes things up and challenges visitors to ask questions.

“I’ve always seen the artistic merit into what was going on in the subway trains. The secondary argument is the negative part: trespassing and vandalism,” he says. “My goal is to have people … first looking at it as an art form.”

Those artistic merits could include style writing, creative font development and use of aerosol, Peyton says.

Peyton says the whole idea of graffiti is an entirely American art form. Birthed here, it had little outside influence until the mid-1980s.

When people think of graffiti, their first thought may be vandalism. Peyton says those negative stereotypes often create debate, but graffiti has deeper roots. The art form started as a “voice of the people."

“This sort of oppressive struggle to have this open conversation without having to ask for permission (is) just completely American in every way,” Peyton says. “It just highlights American values and kind of what we really stand for in this struggle and fight for this freedom of voice and expression.”

With each entry into another art gallery like at the Arboretum, the graffiti community is now almost forcing people to recognize it as art, Peyton says.

Gallery visitors Collette and Jussi Lehti recalled their travels to New Mexico, watching trains adorned with graffiti. They even considered doing a photo series of them.

But after looking at Peyton's work, they realized the depth.

"This is kind of hard to figure out, but it's really interesting," Jussi says. "They're just moving pieces of art. The conditions they're done under, they have to be quick so it's kind of like, wow, you know, just beautiful, beautiful work."

Amy Jonsson, who lives in Eden Prairie, checked out the exhibit with a friend. By the end of the visit, Jonsson left with more than a thank you note in the gallery guest book.

“A lot of it — well, all of it — I didn’t know,” she says. “I think graffiti can be used as vandalism and it can be used in a very negative way, but I think it’s also been used to completely transform communities in positive ways too.”

“We all need to be exposed to all types of art,” she says. “I think out here in the suburbs, a lot of the time graffiti is painted over quickly” — a technique called buffing that Peyton embraces.

"Having that exhibit here is really important even if only white, middle-aged people are seeing it, because I think there's a lot to learn from it," she says. “It’s not just to vandalize things."

She called previous exhibits at the gallery beautiful but “very quiet,” which is one of the reasons she loves going to the Arboretum in the first place, for peace. But opening it up to more than one type of art? That can be good for everyone.

Curator DePaolis says membership is about half families and half retirees.

“I really think there can be something for everybody in the show,” she says. “I’m talking about just diversity, equity and inclusive work … We can help educate people as to how this has gone from train cars in New York City in the '70s to an art-historical-legitimate form of art today.”

Peyton will teach graffiti classes to people 60 and older at the Arboretum this fall. He’ll start by asking participants about their signatures, forming a basis for their graffiti.

"Your signature is like your fingerprint. It’s a reflection of you. It is you, and how you sign your name has a lot to do with the experiences you’ve had in your life,” Peyton says. “I have yet to have anyone in my years of teaching to not really be fascinated by that.”

In the meantime, the gallery is up and offering a historical narrative of its own.

“I really feel like (graffiti) is just something we birthed and it just has to run on its own now,” Peyton says. “There’s a lot of history of dejected and degenerate artists thrown away that were proven to change the course of art history.”

“It’s not just to vandalize things. It’s just one small way that maybe we can start to kind of just understand each other better."