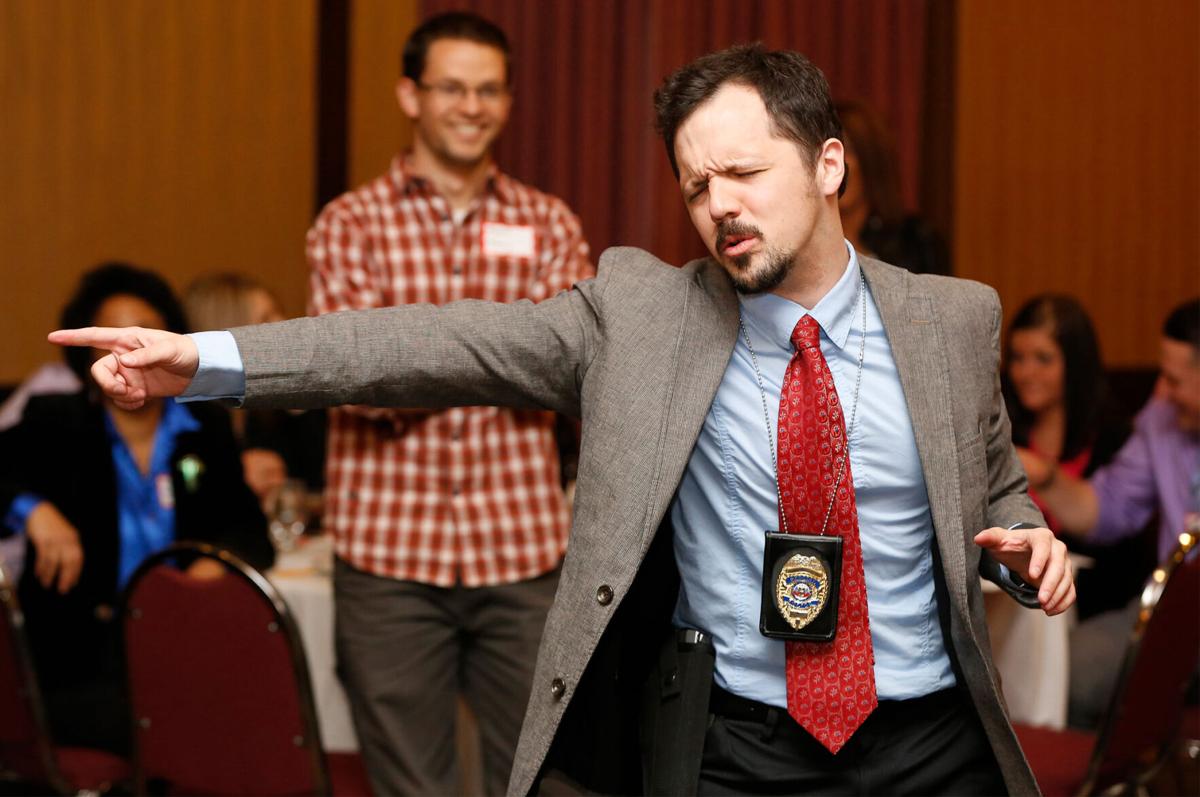 Throughout the evening, clues are uncovered and attendees have to piece together the mystery. At the end of the evening, the person who guesses the murderer correctly, with the most detail, wins the grand prize. 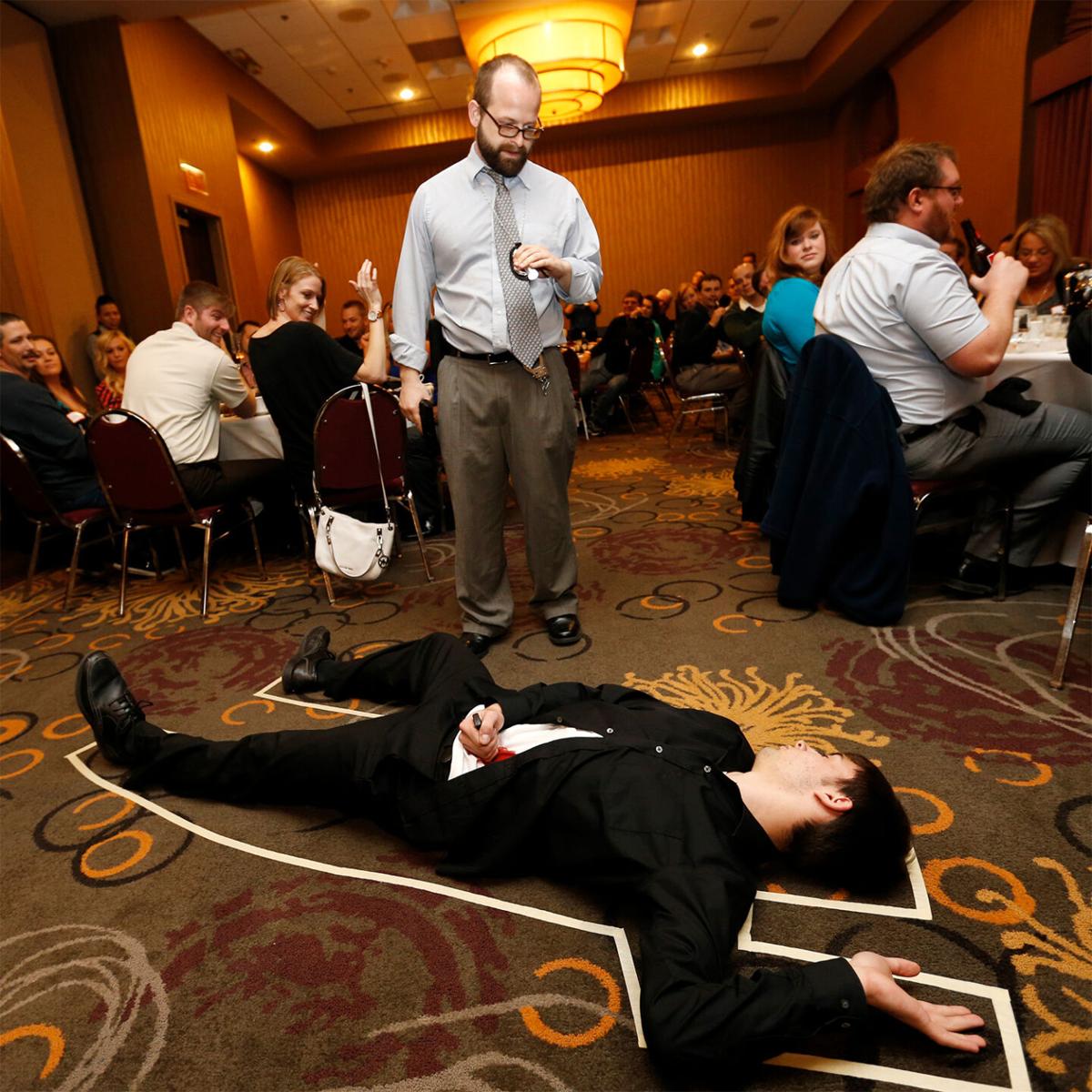 Always thought you’d make a great sleuth, or perhaps you watch a little too much true crime television? The Dinner Detective Murder Mystery show in Minneapolis might be just the activity for you to demonstrate your skills.

The Dinner Detective Murder Mystery Dinner Show is an interactive comedy show located at the Courtyard Minneapolis Downtown, 1500 Washington Ave. South, Minneapolis. Each show lasts around three hours and includes a four course dinner. Tickets are $69.95 and the meal is included.

All guests are considered suspects, said Meredith Wood, the show’s executive producer. Guests are typically seated with people they don’t know and actors are planted in the crowd. When attendees arrive they create an alias and a code name.

“Part of the fun is figuring out who is involved in the mystery, in the crime and then who's really just an audience member,” Wood said.

Throughout the evening, clues are uncovered and attendees have to piece together the mystery. At the end of the evening, the person who guesses the murderer correctly, with the most detail, wins the grand prize.

“We have a really great combination of having a fun, comedic experience, and then also having the mystery game element,” Wood said. “I always like to see that balance of people letting loose, laughing and having a great time, but also really focused in on the clues.”

The dinner shows are held on Saturday nights. Show dates are posted online through December. Some upcoming dates include Oct. 30, Nov. 13 and Nov. 20.

While every show is based off the same script, each performance is a bit unique because of the audience participation and interaction. Shows run for about six months until there is a new script.

“We certainly want to invite others back … so we do have several scripts in rotation,” Wood said. “If anyone is looking to come again, we just suggest checking out the website or contacting the box office and we'll be able to tell you if were running a new script.”

All shows are set in modern day and are based on real cold cases. The clues are detailed, so attendees should pay close attention to things such as names, dates and phone numbers, Wood said.

Wood enjoys the sense of play that comes with the murder mystery show. It’s fun for her to see the aliases that people create and how they sometimes take on that persona. It’s truly interactive, she said. She will notice people interacting with their table mates and by the end of the night, they become fast friends.

“Especially now in these times, it's just so important to be able to laugh and enjoy each other's company,” Wood said.

Due to some adult content, attendees must be at least 15 years old. Attendees span all ages, which is part of the fun, Wood said. The show is great for a group of friends, a date night or the whole family. You can also make friends by getting to know the other people at the table.

Those interested in hosting their own murder mystery show are in luck. The Dinner Detective Murder Mystery show is available for private events. It can perform private shows for groups of 30 people or more.

The dinner menu can be found on the show’s website, thedinnerdetective.com/Minneapolis. There is an appetizer, salad, dessert and a choice of chicken, fish or a vegetarian option for an entrée.

Due to COVID-19, The Dinner Detective Murder Mystery Dinner Show had to pivot its business to online games. It developed a sister company called the Virtual Detective, which offers online escape rooms, scavenger hunts and more. For over a year, the company was unable to perform live shows.

The show officially reopened in August and has been performing to sold-out crowds. The company is taking precautions to limit the number of guests at each table, be mindful of spacing and has digitized the clues so they are accessible by smartphone, rather than attendees passing around a paper copy.

“We are making some adjustments, but the overall vibe is definitely still there,” Wood said.

When: Saturday nights through December. Upcoming shows include Oct. 30, Nov. 13 and Nov. 20.