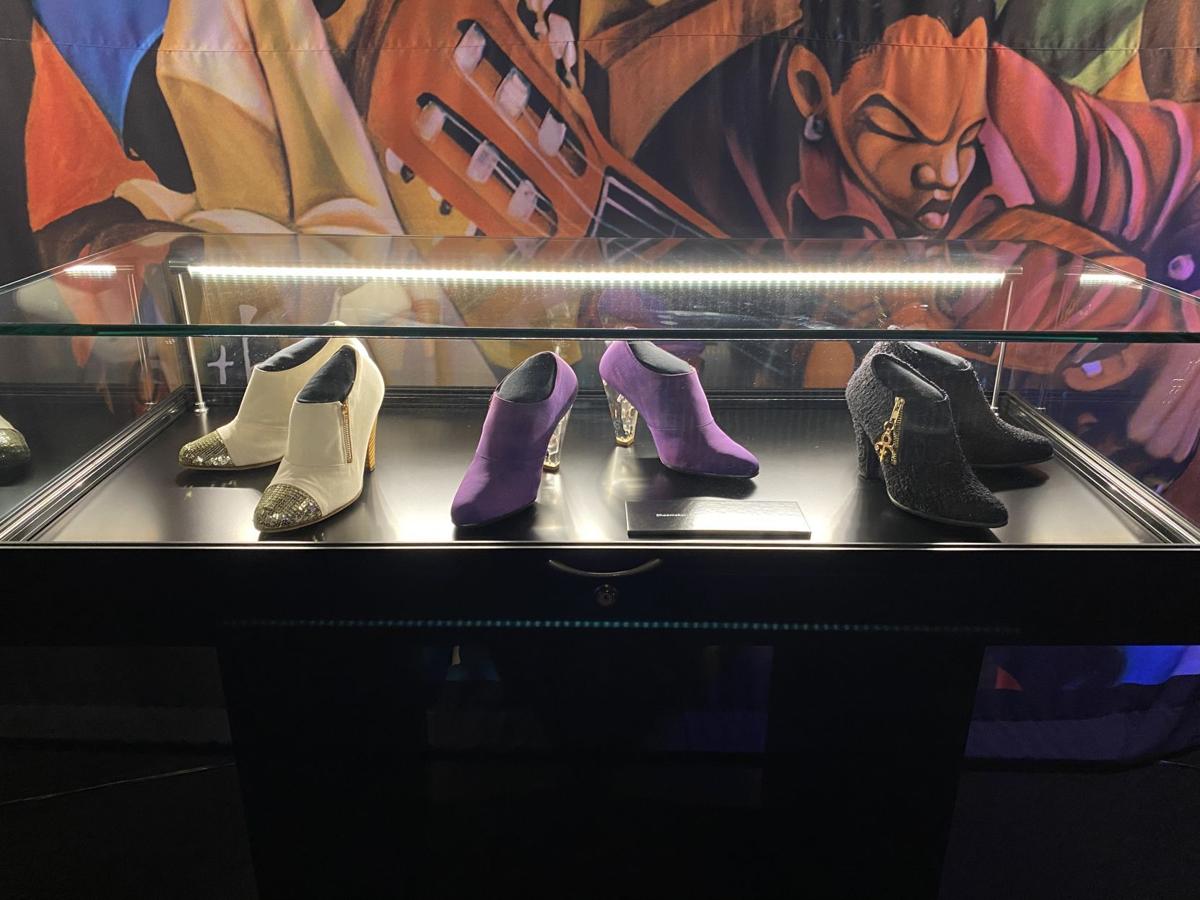 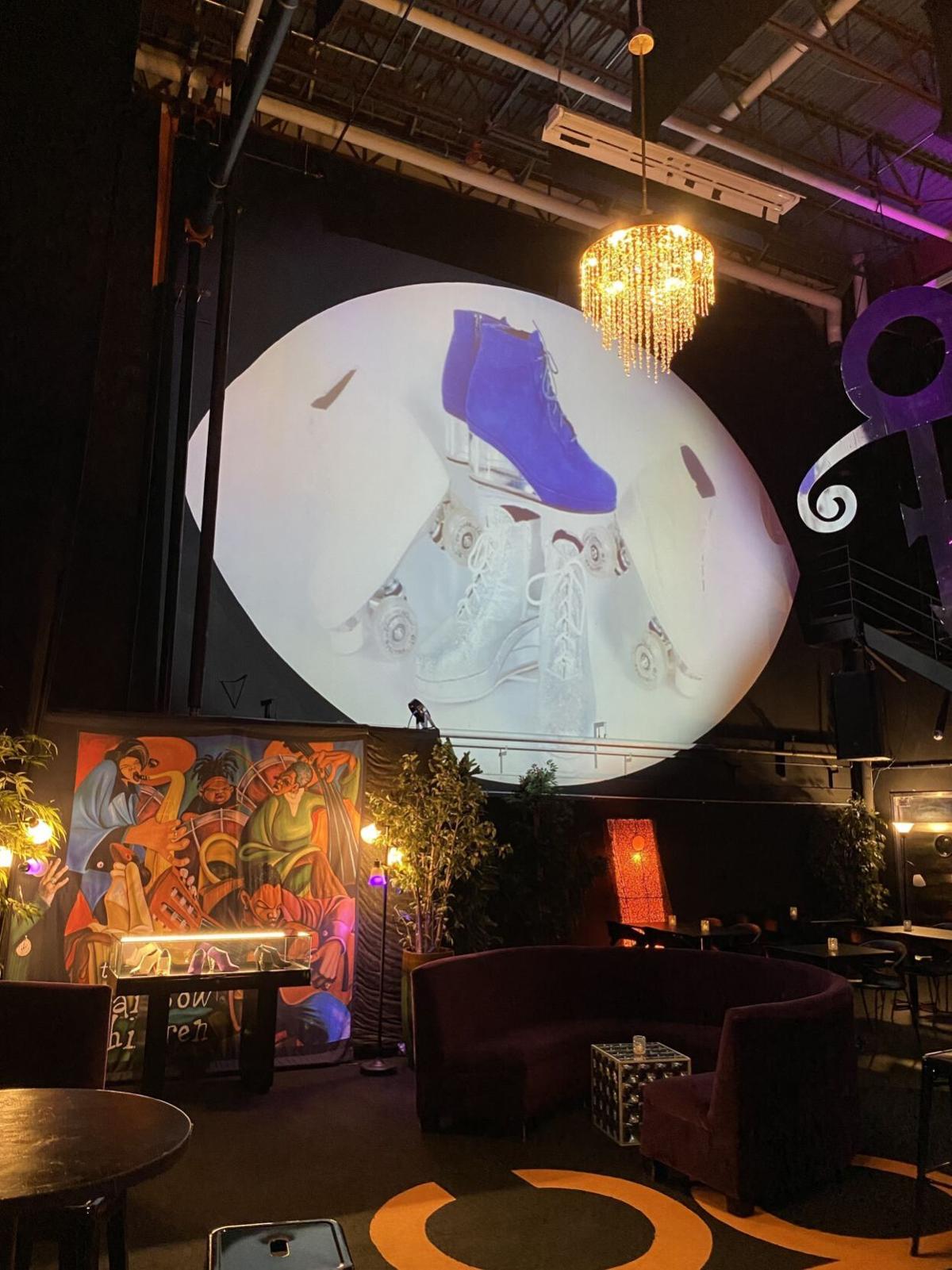 A projector displays images of Prince’s shoe collection, including pairs of his roller-skates, some of which have light up wheels. 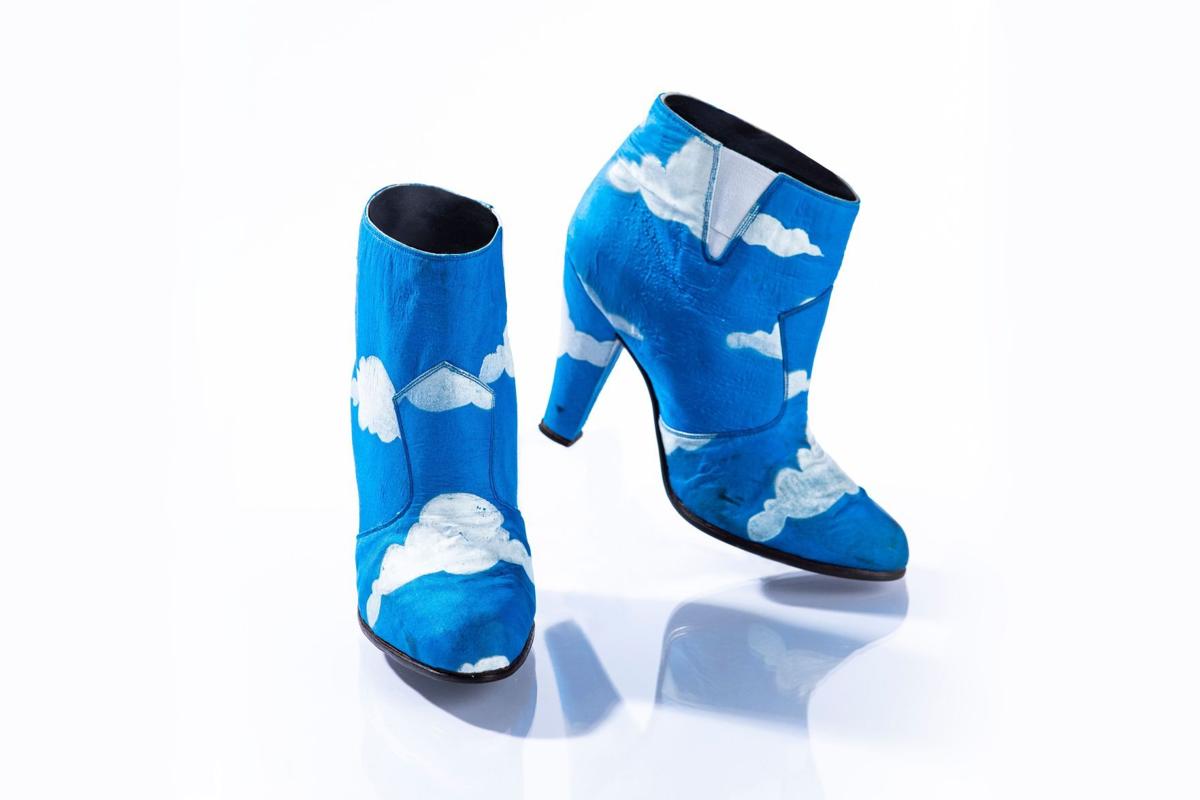 Prince’s blue heeled boots with hand painted white clouds that he wore in the “Raspberry Beret” music video. The boots are on display at “The Beautiful Collection: Prince’s Custom Shoes” exhibit at Paisley Park.

No musical artists could ever quite follow in Prince’s footsteps. His musical genius and keen sense of style are unmatched and at Paisley Park in Chanhassen, fans are in luck. Through a new exhibit, “The Beautiful Collection: Prince’s Custom Shoes,” visitors can get a glimpse of over 300 pairs of shoes from his collection.

The exhibit is included in all tours of Paisley Park through the end of the year and tickets start at $45. The shoes in the exhibit are made with many different fabrics, patterns, including paisley, colors, jewels and some are even hand beaded or painted.

“In terms of how they were constructed, the fabrics that were used, they were really only limited by their own imagination. When it comes to Prince, there's no shortage there.” said Paisley Park Managing Director and Exhibit Curator Mitch Maguire.

Visitors of Paisley Park learn quickly that nearly every outfit that Prince wore was customized for him and that of course included his heeled shoes. For Prince, it wasn’t enough to have a jacket that matched the pants, the shoes had to match as well, which gave him a streamlined look, Maguire said.

That’s why management at Paisley Park wanted to exhibit part of Prince’s shoe collection. The museum decided to dedicate an exhibit solely related to his shoes so visitors could get up close and personal with them, Maguire said. They are works of art in their own right, how intricate, detailed and vibrant they are, he added.

Prince was a man wearing shoes with an elevated heel, something traditionally relegated to female attire, and he was able to own it and do it unapologetically, Maguire said. Prince’s shoes are the perfect vehicle to talk about his overall influence on fashion, he added.

“That, really I think spoke to his own level of authenticity and in doing so, I think really allowed others to appreciate and celebrate what was authentic about them,” Maguire said.

The custom-made shoes, which are around a U.S. men’s size 7, cost anywhere from $600 to $3,600, depending on the level of detailed work that went into them, Maguire said. Today, it’s hard to estimate their worth. In many ways they’re priceless, he said.

The collection of shoes is complemented by exclusive concert footage. Visitors can see Prince spinning on stage, jumping off pianos and going into the splits in the very shoes that are on display. There are also video clips featuring two of the prominent shoe makers, Gary Kazanchyan and Cos Kyriacou, who worked with Prince. The makers discuss what the process was like and how it was to work with Prince.

Kazanchyan, one of the artists, talked about having to think outside of the box to make Prince’s requests come to life. Often, the requests would come last minute, so the shoe makers learned how to get him what he needed in the time frame he needed it.

One time, Prince had a pair of sneakers with a clear wedge that he wanted to light up. Kazanchyan came up with the idea to go to Payless shoe store and buy several pairs of children’s light-up shoes. He then took the lights from those shoes and installed them into Prince’s pair.

A few of the many shoes in the exhibit include roller-skates with clear light up wheels, blue heeled boots with hand painted white clouds that Prince wore in the “Raspberry Beret” music video, black custom-made platform flipflops that he used as slippers and many pairs he wore at performances, galas and on tour.

According to Maguire, some of the most interesting shoes are the ones that Prince clearly wore regularly. The pairs with friction burns marking them from where the fabric was burned away when it rubbed against the stage as he performed.

“Every night he was breaking heels,” read a quote on the wall from Alan Leeds, Prince’s tour manager. “This kid was a hurricane onstage.”

For Paisley Park, it is important to highlight the shoes in a creative way. Guitar cabinets, modeled after Prince’s own cabinets were retrofitted as a display case for part of his shoe collection. Paisley Park also partnered with Minneapolis-based 3D printing company Stratasys, to create the world’s only 3D printed grand piano display case. In the piano display case are some of the most iconic shoes that Prince ever wore, Maguire said.

“When you step into this room ... it's not something stagnant. It's not just some shoes in a display case,” Maguire said. “You're catching a glimpse of Prince's life in about a 15-minute experience.”

Prince said it best in the lyrics from his song, “Hello (Fresh Dance Mix).”

“Come now, isn’t life a little better with a pair of good shoes?”

Date: Friday, July 9 through the end of the year

Tickets: Tickets start at $45 and the “The Beautiful Collection: Prince’s Custom Shoes” exhibit is included in all tours of Paisley Park

Information: For more information or to purchase tickets, visit paisleypark.com