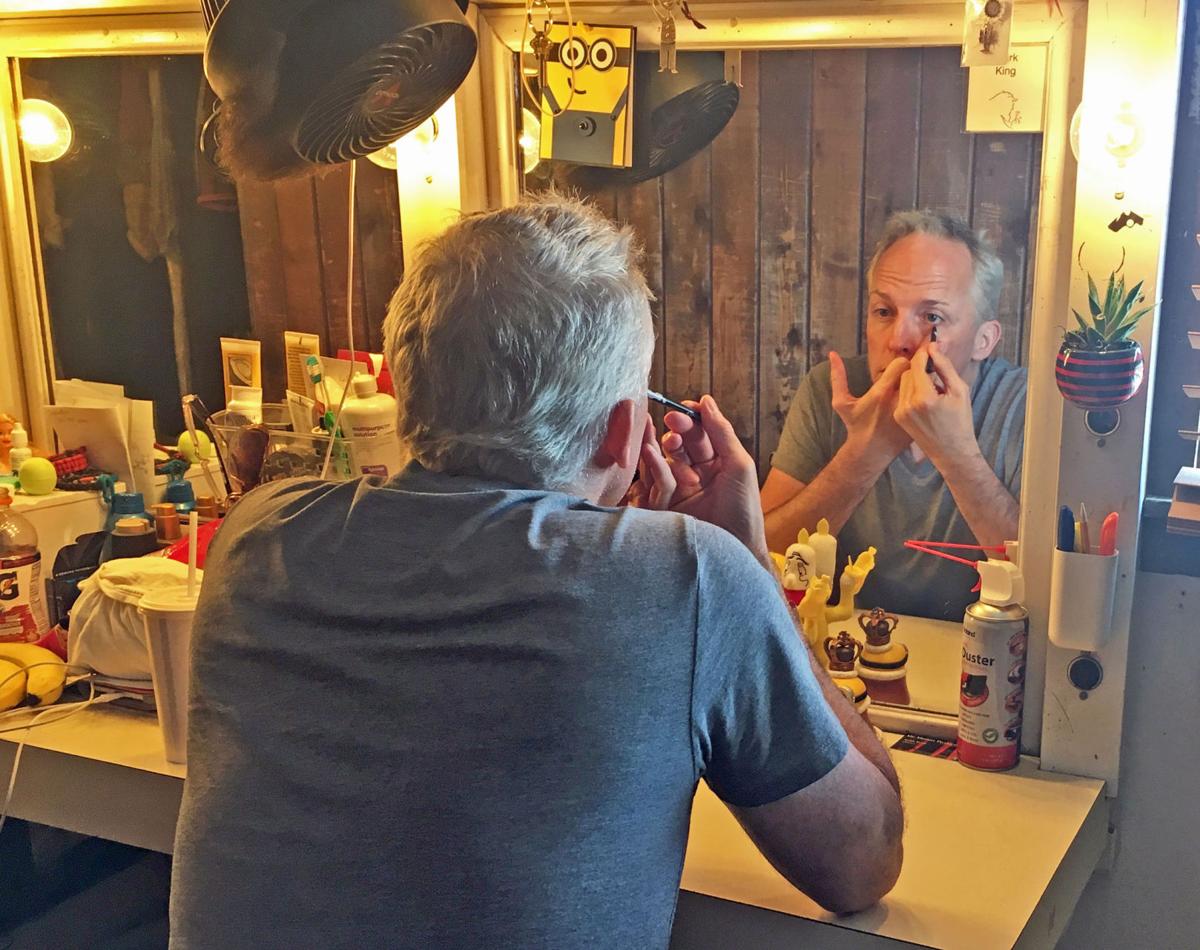 Mark King, who plays the role of Lumiere in “Beauty in the Beast,” prepares for a recent performance backstage at Chanhassen Dinner Theatres.

Ruthanne Heyward, who stars as Belle in “Beauty in the Beast,” poses with a young fan after a recent showing.

Mark King, who plays the role of Lumiere in “Beauty in the Beast,” prepares for a recent performance backstage at Chanhassen Dinner Theatres.

Ruthanne Heyward, who stars as Belle in “Beauty in the Beast,” poses with a young fan after a recent showing.

Mark King steps backstage and shakes out his arms as he hears the audience burst with laughter — it’s finally intermission. For King, intermission means taking a break from holding his arms in a 90-degree candlestick fashion as Lumiere. King says the burning is worth it to hear the instant feedback from a great audience.

Last week marked the 150th performance of the main stage production of “Beauty and the Beast” at Chanhassen Dinner Theatres. The show will continue its run until Sept. 24.

Although King says the hardest part of keeping energy up during “Beauty and the Beast” is the physicality of the show, the audience is also a major element of energy for actors in general.

“It’s not just us out there doing it and you’re sitting there like you would when you’re watching TV,” King said. “You’re actively involved, and that gets us more excited. But it definitely can be a drain if an audience is quiet.”

For King, bigger roles are easier to keep fresh. A bigger character provides more substance and actual lines to help tell a story. As Lumiere, King pulls out his script and looks over every scene before he appears on stage. His script acts as a reminder for his French accent he keeps throughout the entire show and also serves as an outlet for discovery. Each time King goes over his script he said he finds something new — whether that be something about his character, or a different approach to a line.

Energy and momentum is crucial for an actor, especially with a run as long as seven months.

Ruthanne Heyward bounces on stage of Chanhassen Dinner Theatres and scans the audience for a fleeting moment before the stage lights reveal her. A smile flickers on her face as she spots a 6-year-old little girl dressed to the nines — head to toe glitter with a bustled gold sequin ballroom dress. Almost an exact replica of the dress Heyward wears later on in Act 1 as Belle.

Despite the number of performances, audience members — including the miniature Belles — leave exclaiming their favorite lines on the way to the parking lot.

“That helps keep it fresh — knowing that this is someone’s first night seeing it,” Heyward said reflecting on Belle wannabes. “It might be my 150th time seeing it, but it’s their first time seeing it.”

Heyward takes very good care of herself during the strenuous run, claiming she lives like a nun.

“It definitely is an art form to learn how to do an eight-show week and not be tired” Heyward said with a laugh in between bites of lunch after a Wednesday matinee.

Heyward is not new to the CDT stage. “Beauty and the Beast” is her fourth show at CDT. Heyward was first cast in “Bye Bye Birdie” following her graduation from Bethel University in 2011. Since then she has been seen in “Fiddler on the Roof” and “Joseph and the Amazing Technicolor Dream Coat.” After moving to New York, Heyward was called back to play Belle. Heyward plans on moving back to New York after the seven-month run.

Michael Brindisi is also a source of encouragement to actors. As the resident artistic director, Brinidisi’s job would seem to be complete after the production has opened. However he finds himself motivating actors and crew by leaving little written notes or pulling them aside for quick chats. Brindisi has been the CDT director since 1987.

“I don’t have a problem with momentum motivation,” Brindisi said. “I absolutely love my work.”

Love seems to be a similar theme for everyone at Chanhassen Dinner Theatres. King is going on his 21st year as an actor at CDT and has been on every main stage production since 1995 — except one 9-week production, in which he took a deserved trip home and actually got to attend a wedding. Like many at CDT, King’s biggest source of momentum and energy is his love for the art and his desire to share that with others. He can’t imagine doing anything else.

“I just love it here. Everybody who works here talks about the Chan family,” King said. “It’s really just creating something as a group and putting it out there. It’s not just a job here.”

King takes nothing for granted. He knows that there are hundreds of other people who would gladly take his place. King’s first show was when he was in kindergarten and plans on doing theater until the day he dies. Although his passion is evident, it’s matter of fact that he has a job he has to do by giving each show the same amount of energy as the last.

“I go through that too,” King said regarding actors who have off days. “But I know I really want to do the show. I just don’t necessarily have the energy to put on makeup or put on all of the costume pieces, but I know that once I get out there I’ll be excited. I’m looking forward to that part.”

Beret Leone, a Chaska High School graduate and Bethel University journalism major, is an intern with the Southwest News Media this summer.