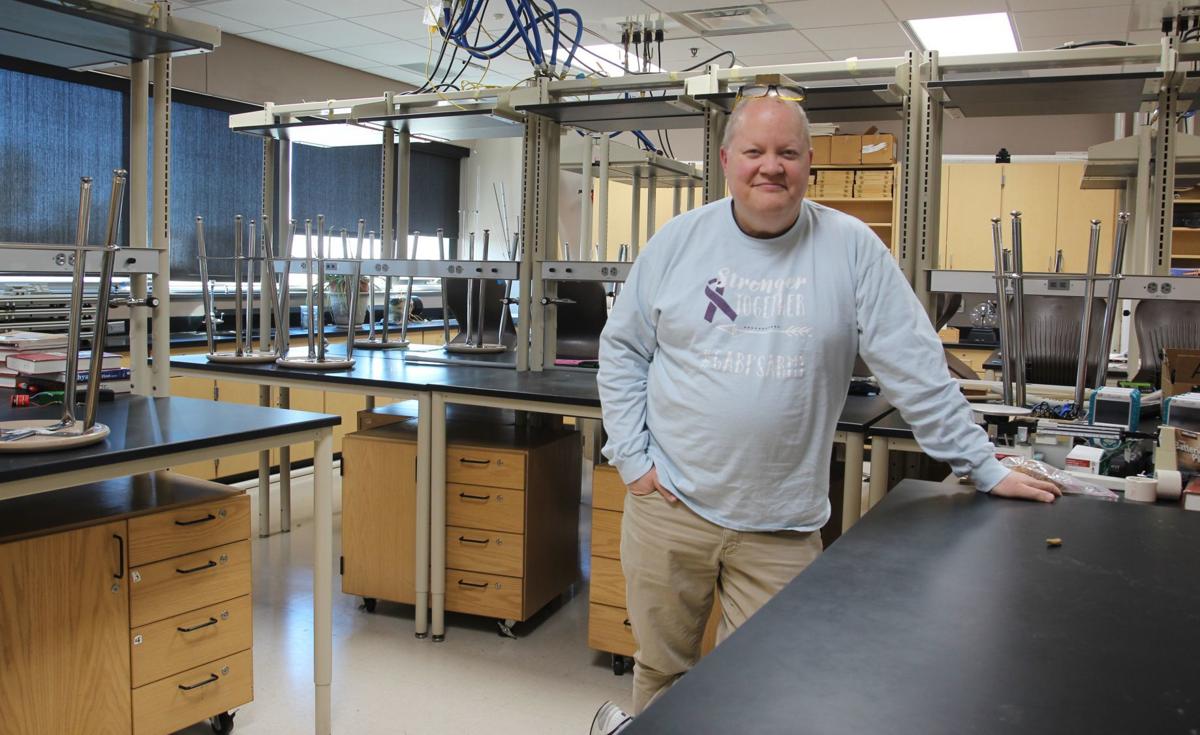 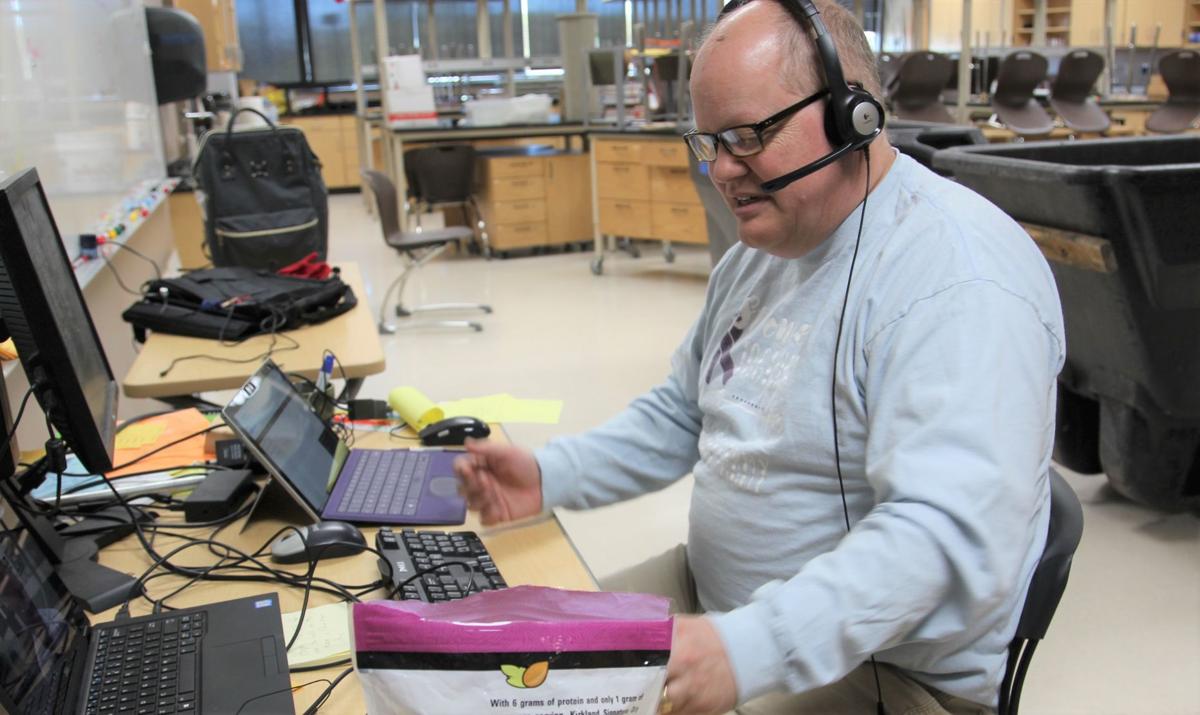 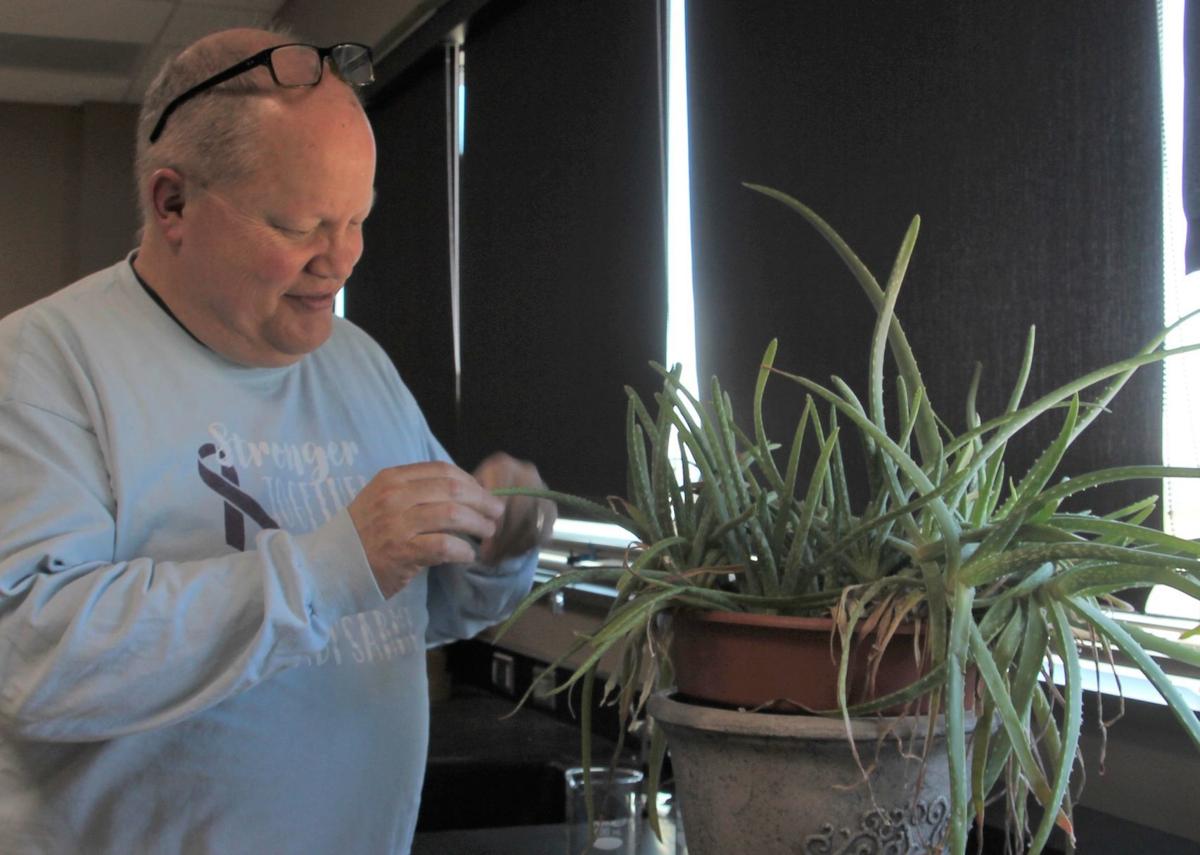 Years ago, a student gave teacher Jim Lund a small cutting from an aloe plant he named “Audrey II,” a nod to the beguiling man-eating plant in the musical “Little Shop of Horrors.” Audrey II has thrived in the science lab.

Years ago, a student gave teacher Jim Lund a small cutting from an aloe plant he named “Audrey II,” a nod to the beguiling man-eating plant in the musical “Little Shop of Horrors.” Audrey II has thrived in the science lab.

The chairs are stacked along one side of the classroom. Stools are stacked on the lab tables on the other side.

It’s Jim Lund’s physics classroom — Room 146 — at Chanhassen High School. It’s empty. It has been since March 30, when Gov. Tim Walz closed all Minnesota schools for the COVID-19 pandemic quarantine.

“It’s definitely not the way I thought my last year would go,” Lund said. After 24 years of teaching physics at District 112, first at Chaska High School, and then Chanhassen High School, Lund, 55, is retiring from teaching. Similar to this year’s 2020 high school graduates, his celebratory life passage is closing with a whisper, not a bang.

Bittersweet as it might be, Lund is already looking ahead. He and his wife Nancy recently sold their home in Tonka Bay, and have moved to a home near Nisswa. He’s looking forward to the new place. It has a big pole barn, with plenty of room for him to do some woodworking with the radio playing in the background, tuned to classic rock.

In the meantime, Lund has been distance teaching from his Chanhassen classroom. The school day begins with checking student assignments, answering questions, taking care of any issues with access, getting grades documented, and assigning the next day’s work.

His physics teaching partners are Whitney Epperle and Chris Lenius. Being able to work as a team has helped everyone navigate the distance teaching and learning.

Drew Machacek, a sophomore, had the opportunity to get to know Lund through the Science Bowl.

“Mr. Lund was a great coach for Science Bowl,” Drew said. “He always made sure we got where we needed to be, when we needed to be there, was always kind and knowledgeable, and was always willing to explain science questions or chat on related topics. I really enjoyed having him for a Science Bowl coach.”

As did Lauren Gizinski, a junior, also on the Science Bowl team.

“In class, Mr. Lund has an obvious enthusiasm for the subjects that he teaches,” Gizinski said by email. “This is partially demonstrated by the variety of interesting demonstrations that he does for the class. Last year in Physics 1, I remember him taking up an entire hallway with a giant slinky-like object to demonstrate the different types and properties of waves. He is also very willing to re-explain problems and provide additional help when needed.

“Mr. Lund was also inclusive of all ability levels during Science Bowl, which made it a welcoming environment. Although he wanted our teams to do well, a large priority for him was for us to have fun learning and discussing science.”

Besides missing daily interaction with students, Lund is also missing his opportunity to direct his last high school play. He and Chanhassen’s theater students were planning to perform Shakespeare’s comedy, “A Midsummer Night’s Dream.”

You could say that the left and the right sides of the brain are strong in this one. Did you know theater was Lund’s first choice as a career? After graduating from Eisenhower High School in Hopkins, Lund attended the University of Minnesota-Duluth. He majored in theater, the outlier in his family.

“My family has a strong science bent,” Lund explained “My sisters are geology and chemistry professors, my brother is in computers, my dad taught math and mom was a science teacher.” While he had an aptitude for math and science, he also enjoyed a reputation for his antics.

“My sixth-grade teacher put it this way … ‘You ought to do that on stage,’” Lund chuckled. “I was one of those weird kids. I did things to get attention.” His choice to be a theater major didn’t raise too many eyebrows in his family, “although when I wasn’t in the room, there was probably a lot of concerned conversation.”

After college, he did make a living in theater for several years, along “with a little of this and a little of that.” Then he returned to school on what he described as “the slow plan,” to teach physics.

During his job interview with Chaska High School, Lund pointed out that he also had a theater background, looking for a way to keep his hand in theater. He had the chance in his second year

“Marie Hasty was the activities director at the time,” Lund said. “She came up to me during workshop week and said, “Do you want to direct the fall play?”

“She said, ‘Good. You have auditions in five days.’” His first play was “The Foreigner.”

“I love the way I got to meet a different group of kids,” Lund said. “It was having the best of both worlds. People would ask, ‘How can you possibly be interested in both. And I would say that if you get beyond the standard high school physics, you’ll find there are strong ties between science and physics and music and theater. So much so that it’s the way real scientists solve problems. They have dreams, they distract their logical minds for a while, allowing them to come up with creative solutions.

Lund picked “The Foreigner,” a 1984 two-act comedy by American playwright Larry Shue. There were only nine in the cast. And he quickly realized why high schools like to do the big shows with the big casts.

“Because how do you tell everyone ‘No?’ I learned you have to give everyone an opportunity.”

Lund is disappointed Chanhassen’s spring theater production was cancelled. “A Midsummer Night’s Dream,” is one of Lund’s favorite plays,

“It is a way of hooking kids into Shakespeare, Lund said. “I’ve done it many times in high school, in college, here. I’ve been in it, I’ve directed it. This would have been my seventh time one way or another.

“For high school kids, it’s perfect. It’s about impetuous young love, young kids who are just nutso about each other and then things get twisted around. It’s so appropriate for this age, that love is going to drive you crazy. It allows kids to act with a certain kind of abandon. It’s not just love. It’s LOVE!

“We were three or four weeks into rehearsals when school closed,” Lund said. “It was getting to the point where I usually run around and go, ‘We don’t have any time left!’

“So it was disappointing,” Lund said. “So much was lost this year and this was one more thing. In fact, May 2 would have been closing night for the show.

“I really hope that they (the students) got something out of it even if we didn’t do the show,” Lund said. “Rehearsal is where you learn the most. The performance is the fire that hardens you, but rehearsal is where the growth happens. I hope they have an appreciation of Shakespeare, and I hope it encourages them to do (theater) again. We have some excellent talent.”

Chanhassen High School senior Robbie Wichterman appreciates Lund being part of his high school career in the classroom and in theater.

“He was the first director to see my potential and cast me in something,” Robbie said by email. “I played the ‘bumbling foreign doctor’ in Jeffery Hatcher’s adaptation of ‘The Government Inspector’ ... I wouldn’t be where I am today if it wasn’t for Mr. Lund seeing me, and seeing my potential as a performer and as a person.

“He is also the first person who I went to for writing a college letter of recommendation, because I knew that through the eyes of Mr. Lund, I would shine out, as every single kid who has gotten to know him would. He has a great way of connecting to everyone and not excluding them. Through theater warm-ups, rehearsals, notes, ideas (even the crazy ones), and other shenanigans, Mr. Lund is a truly remarkable human being.”