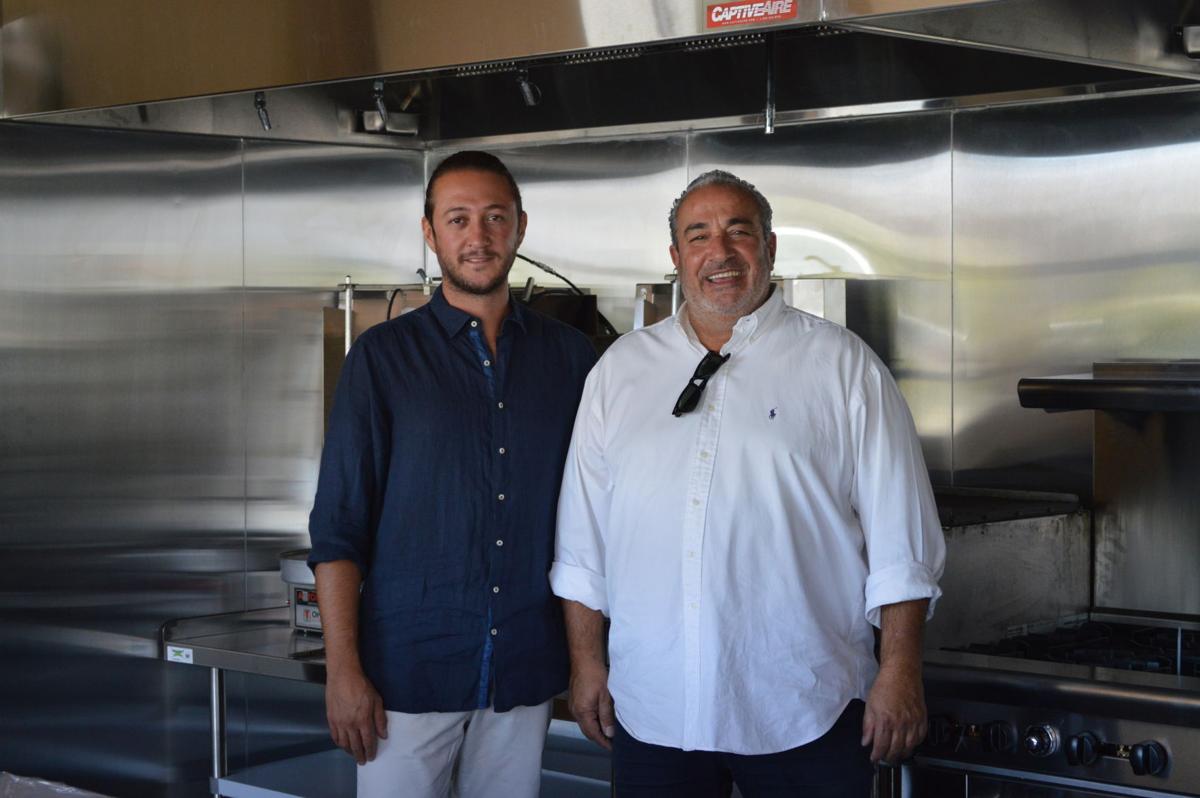 Semih Ayhan and Tuncay Ozdenak stand in front of their open-concept kitchen at the future Med Box Grill restaurant. 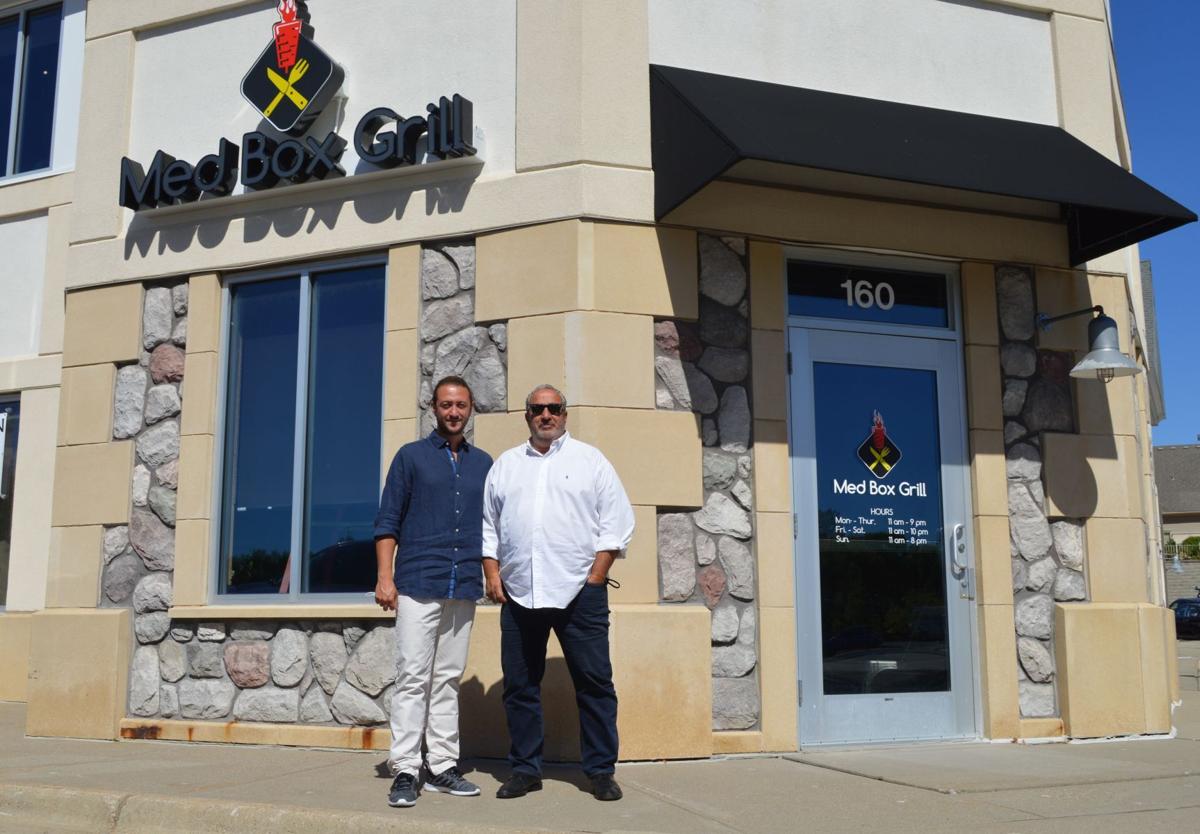 Med Box Grill co-founders Semih Ayhan and Tuncay Ozdenak stand in front of their new location, which they hope to open in mid- to late-October.

Semih Ayhan and Tuncay Ozdenak stand in front of their open-concept kitchen at the future Med Box Grill restaurant.

Med Box Grill co-founders Semih Ayhan and Tuncay Ozdenak stand in front of their new location, which they hope to open in mid- to late-October.

On a typical summer day parked at a local brewing company, the line for Med Box Grill’s food truck is dozens strong.

The smell of freshly-cut gyros wafts from the truck’s open doors, bringing more customers to the bright yellow and white truck’s window. Behind it are co-founders Semih Ayhan and Tuncay Ozdenak, serving up their Turkish-style kebab wraps, falafel and hummus.

Feedback is overwhelmingly positive. Customers often want to know where their restaurant is. Before this year, they didn’t have an answer — now, they can say they’re opening in October at 600 Market St. in Chanhassen.

The Med Box Grill food truck, which began in 2017, can be spotted at breweries, food festivals and other neighborhood hotspots across Twin Cities suburbs almost every day (minus the winter months).

After years of contemplating and hundreds of customers asking, the two are officially opening their first brick and mortar restaurant this fall right in the heart of Chanhassen.

Both of Turkish descent, Ayhan and Ozdenak combined their family recipes to make a unique menu of Turkish-style Mediterranean foods you can’t find anywhere else. Their new location on Market Street allows them to expand their repertoire and serve the happy customers all year round, Ozdenak said.

“People can’t wait for us to open. We get comments saying how excited they are, phone calls asking if we’re ready yet. We’ve seen people take a picture in front of our sign,” Ozdenak said.

Before Med Box Grill, Ozdenak was operating a high-end women’s clothing boutique in Excelsior. The problem? His location.

Having moved directly from Los Angeles, he didn’t know the state well enough to know where his business would succeed — “it was better suited for Edina,” he laughed.

Ozdenak then wanted to use his prior experience in the restaurant business to open his own, but feared he would have the same issues if he opened a brick and mortar location.

Enter Ayhan. While he was a banker at the time, he grew up working at his family’s long-running bakery. After being introduced to Ozdenak by a mutual friend and hearing about his restaurant aspirations, they became business partners in 2016.

Though they originally continued the search for a brick and mortar location in Bloomington, the two ultimately decided that a food truck was the perfect choice. With low start-up costs and no set location, they could try out their concept in different areas and see what was most successful.

“The food we’re selling isn’t burgers and fries. It’s not something you can open up on every corner and make money on right away. People don’t always know what Mediterranean food is and what Turkish Mediterranean food is, so the food truck was a good start,” Ayhan said.

Their recipes have been passed down from generation to generation and they pride themselves on their freshly cooked food, large portions and reasonable prices, Ayhan said. Their bestseller, a 14-inch wrap with a half-pound of gyro meat, is just $10.

“We were the most popular vendor. Nobody had lines like ours, and that’s when we knew that Chanhassen people love our food,” Ozdenak said.

For the past three years, Ayhan, Ozdenak and their two employees have been operating the food truck almost every day. They close in the winter, but the calls and emails from customers asking where their physical restaurant continue all year round.

By 2019, the two had lived in Chanhassen for several years and knew exactly what they needed if they were going to open a brick and mortar location — a large capacity and plenty of parking. When the Market Street space opened, they knew it was the perfect spot.

Their new place, which seats up to 190 people inside and 40 on the patio, is located next to Chanhassen Cinema (the windows face the landmark Prince mural) and steps away from Chanhassen Dinner Theatres, hotels, the Venue apartment complex and other local businesses. They signed their lease in February of this year and began construction in April.

Part of the 4,500-square-foot restaurant will be a cozy bistro/bar, while the other half will be more of a sit-down dining experience with an open-concept kitchen. Diners will be able to try new menu offerings like lahmacun (Turkish pizza) and adana kebabs.

Perhaps the most unique aspect? Med Box Grill will have a gift shop, selling handmade goods directly from Turkey and other parts of the Med. Offerings range from olive oils and vinegars to brightly colored lamps that will also be used across the restaurant.

“We wanted to have something different than everybody else. We’ll have a nice, cozy atmosphere, and now if someone likes our decoration or foods, we can offer it for our customers,” Ayhan said.

Everything was looking good when they signed their lease in February, but widespread COVID-19 lockdowns began just weeks after.

“No matter what, we wanted to open. We were asking ‘Should we change our style? Concentrate on to-go?’ But as of now, it’s less strict than it was back in March, so we can still open the restaurant and do takeout too,” Ozdenak said.

Thankfully, the only real delay has been the installation of their restaurant hood, and the biggest challenge is all the paperwork and permits.

The opening date of October has also remained relatively untouched by COVID-19 — there’s only been a three-week delay, which is “nothing in the restaurant world,” he said. For now, their goal is to keep everything operating.

“We can't predict anything anymore. Our main goal right now is to stay in the business. We don’t just have a food truck now, we have rent, expenses, more insurance, utilities, more restaurant workers. We want to make enough that we can pay everything,” Ozdenak said.

If the location is a success, the two have considered opening smaller restaurants in the areas their food truck performs well. But don’t expect a franchise — they’d rather own 10 Minnesota restaurants than have 100 franchises across the country. In the meantime, the food truck will still be operating, though customers are already asking if the Market St store is open yet.

“I’m excited to see the customers coming in. You’re bringing your food, your recipes, your culture to a whole new community, offering them something they wouldn’t be able to get anywhere else. I can’t wait to see the reaction on their face,” Ayhan said.