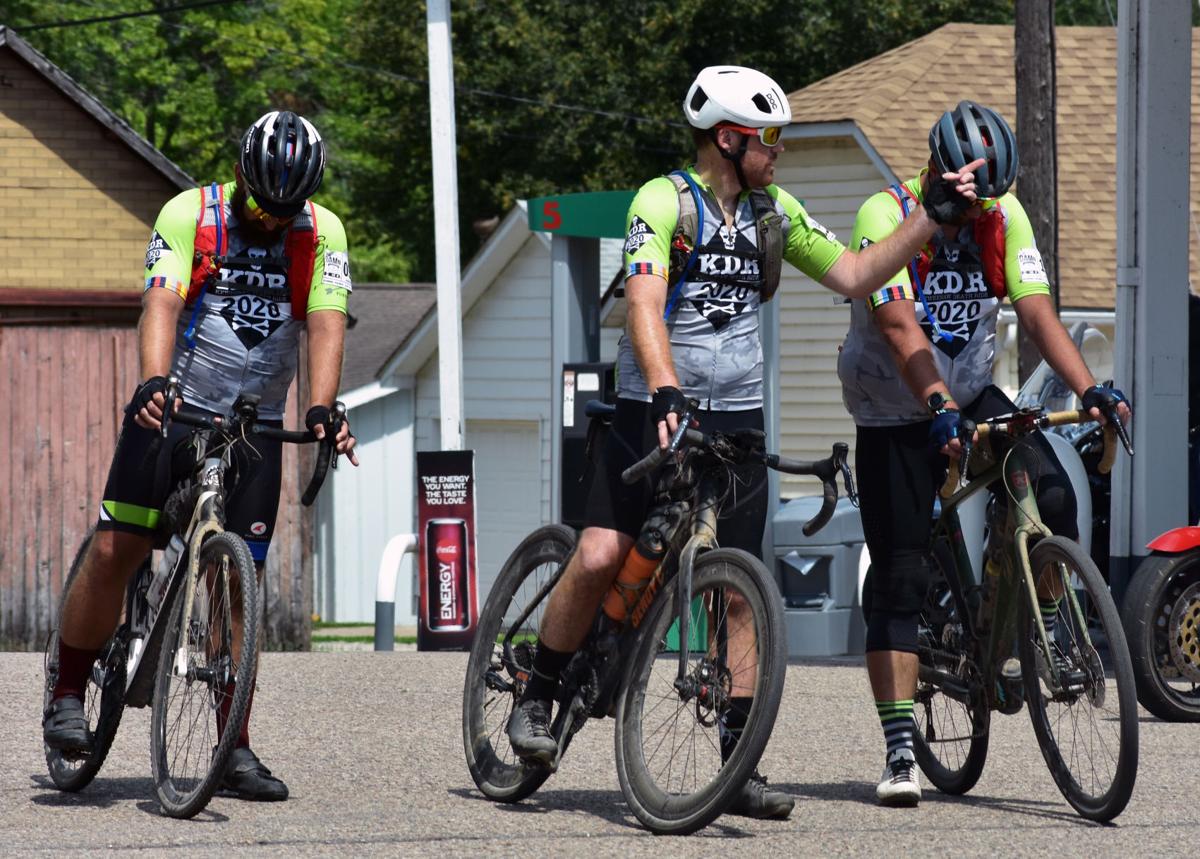 A small group of bikers gear up at a rest stop in Henderson, fueled and ready for the final stretch of the race. 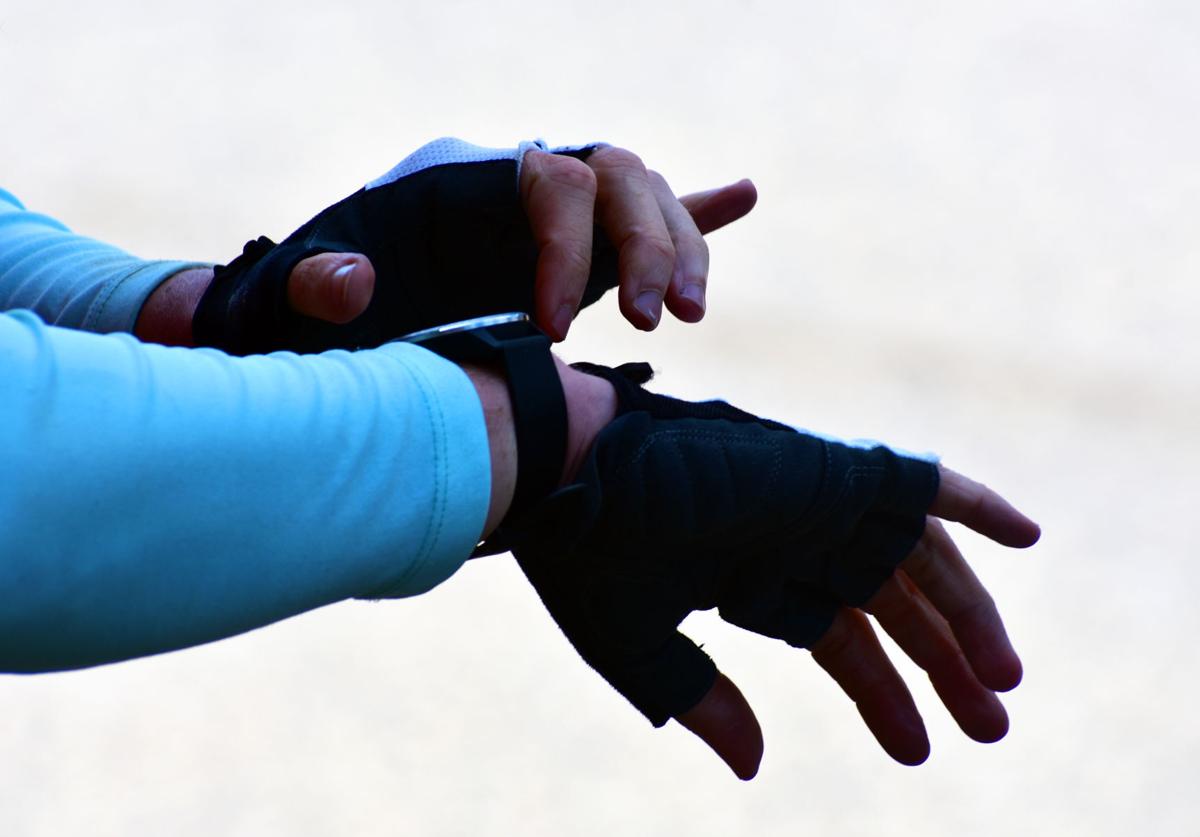 A rider re-sets her watch after a pit stop in Henderson.

A small group of bikers gear up at a rest stop in Henderson, fueled and ready for the final stretch of the race.

A rider re-sets her watch after a pit stop in Henderson.

A dozen or so lawn chairs are scattered throughout rural Henderson on a sunny Saturday afternoon.

Every once in a while, a faint cheer or small round of applause will arise from a curb down the small town street.

“At almost every corner, you had someone sitting on a lawn chair saying, ‘Go! Go! You’re doing great!’” said John Jarvis, from Eden Prairie.

He was one of 200-some bicyclists riding in the Day Across Minnesota, or DAMn, race on Saturday. It wasn’t your average race.

In-between was up to 24 hours of biking on dirt roads from Gary, South Dakota to Hager City, Wisconsin. It’s a 240-mile route.

“I just felt like I wanted to pull over and take a nap in a ditch somewhere,” said Robert Tuma, a biker from Prior Lake.

So he did. Somewhere along a rural road near I-35W, he laid his head to rest for just 20 minutes before carrying on.

“But all things considered, I came out fairly unscathed,” Tuma said.

For four years, DAMn racers have biked (or tried to) across the southern stretch of the state, said Trenton Raygor, race director.

This summer, the trek went mostly as planned. The location stayed the same and the premise — 24 hours of biking — was locked in place. But with COVID-19 also along for the ride, a few things looked a little different.

The last three years offered three checkpoints throughout the ride, in locations Raygor calls “in the middle of nowhere.”

Out of caution for racers and their support crews, such gathering places wouldn’t be viable. So, family and friends could help their rider out with a water refill or rest stop at three places of their choosing along the route.

And it worked. He said no more than 20 people at once gathered at an outdoor intersection.

“That was a big change. A lot of riders really liked it,” Raygor said. “It allowed them to see different parts of the state.”

Riders kicked off the race while six feet apart from one another, he said, and wore masks at the start and finish lines.

“We kind of made sure that precautions were being followed and then some,” Raygor said.

Chanhassen biker David Wargin loves biking so much that he returned to the DAMn race after riding it just a few weeks before. This time, he didn’t ride but offered support to other racers.

Anticipating conflict with his son’s college move-in day, which was rescheduled, he asked organizers if he could simulate the ride by himself.

“I love to race and this isn’t a typical season, so I was OK with going solo this year,” Wargin said. “I love to go out and do adventures myself anyway.”

And what an adventure it was.

Two miles after starting, it started pouring rain. He biked for 60 miles like this in the middle of the dark, accompanied by thunderstorms.

“I was out there in the prairie all by myself, not a soul in sight. I could barely see any of the farmhouses and it’s just pouring rain and I thought, ‘Boy, this is a good way to start,’” he laughed. “At least I was warm.”

Race behind him and the wisdom of it all with him, he set up a tent on the official race day near mile 141. He and his family handed out nourishment and fixed up chains for in-need bikers. He said about a third of racers went completely unsupported like he did, so it was the least he could do to help.

Victoria biker Jay Swenson rode for 85 miles that day until last year’s spinal fusion surgery got the best of him.

“The gravel really just kind of pounded my neck into submission,” he said.

But he’s no stranger to long rides. Swenson has been racing for 42 years, whether touring or just commuting to work. This year alone, he’s gone for a 200-mile ride, five rides over 125 miles, and around ten 100-plus stints.

“The thought of spending all day on my bike is something I really look forward to,” he said. “It just calls my heart; calls my soul.”

“It was a beautiful beautiful day. It was cool and it couldn’t have gotten any better,” rider Jarvis said.

He biked the DAMn last year when it was 90 degrees with a high dewpoint.

“And this year was just perfect,” he said.

He had hoped to finish before dark, but ended up staying back to accompany a first-time rider.

“I didn’t really end up racing,” Jarvis said. “We rolled down the hill into Red Wing right at sunset… We just dedicated (and said), ’Eh, let’s just ride together and enjoy the day.’”

He said sleep deprivation got to him, but after grabbing soma calories at a nearby convenience store he “chomped ‘em down and rolled on.”

Throughout the race, bikers would stop and have a rest or chat with fellow racers, perhaps surprisingly not too discouraged by the miles upon miles left to go. But after crossing that finish line with hours behind them, their bodies felt it.

Tuma knew the recovery wouldn’t be the same as a typical 100-mile venture. When he finished, both his forearms were knotted and he was fatigued. His first stop wasn’t until mile 84.

“I almost fell asleep in the middle of a story I was trying to recant to a friend of mine on the way home,” he laughed.

But all in all, he boils the after-effects down to “some aches and pains,” forcing down a Subway sandwich and getting salt into his system every 15 minutes. He finished in 20.5 hours before sunset kicked in.

For him and others, the scenery seemed to be their biggest support.

“It was breathtaking at the beginning, taking off and just seeing all the red (bike) lights out in front of me, the stars,” Tuma said.

“Every time I stop to pee I just look up,” he added. “It’s been a while since I’ve been out in the open that much, just looking around it’s just a lot of natural beauty up in the sky.”

Wargin likes to take the views in, calling the whole scene “incredible.” Being out there on your own amplifies that. He took everything in from the clouds to wildlife and passing farmers.

If he ran low on water, he’d knock on a farmhouse door. The occasional friendly dog would be up for a race sometimes, too, he said.

“Being out there on your own, that sense of adventure,” he said. “You’re out there by yourself but you’re not,” he said.

But sometimes the beauty of it all isn’t enough to remove doubt of finishing.

“There are times when it really, really — call it dark period or spot,” Wargin said.

You’re by yourself, pedaling up a steep hill.

“You just learn to get through it. You just pedal one stroke at a time,” he said. “You find something inside yourself where you know you can just do it.”

Upon completion, there’s no title or reward to brag of, but director Raygor said people are treated to a glass of beer if they’re so inclined. Otherwise, most everyone can agree on why they did it in the first place.

Raygor summed it all up: “It’s just for fun."

“You find something inside yourself where you know you can just do it.” - David Wargin, bicyclist