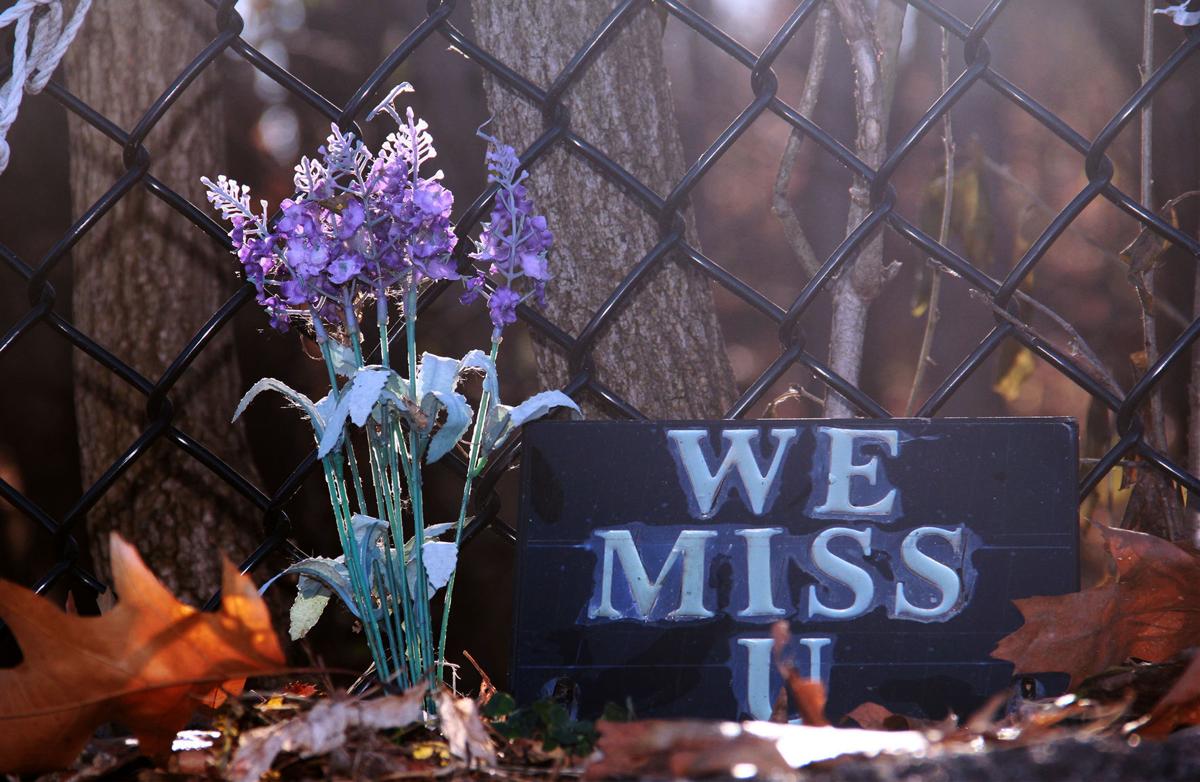 The sun shines down on purple flowers resting next to a “We Miss U” sign along a fence near Paisley Park. 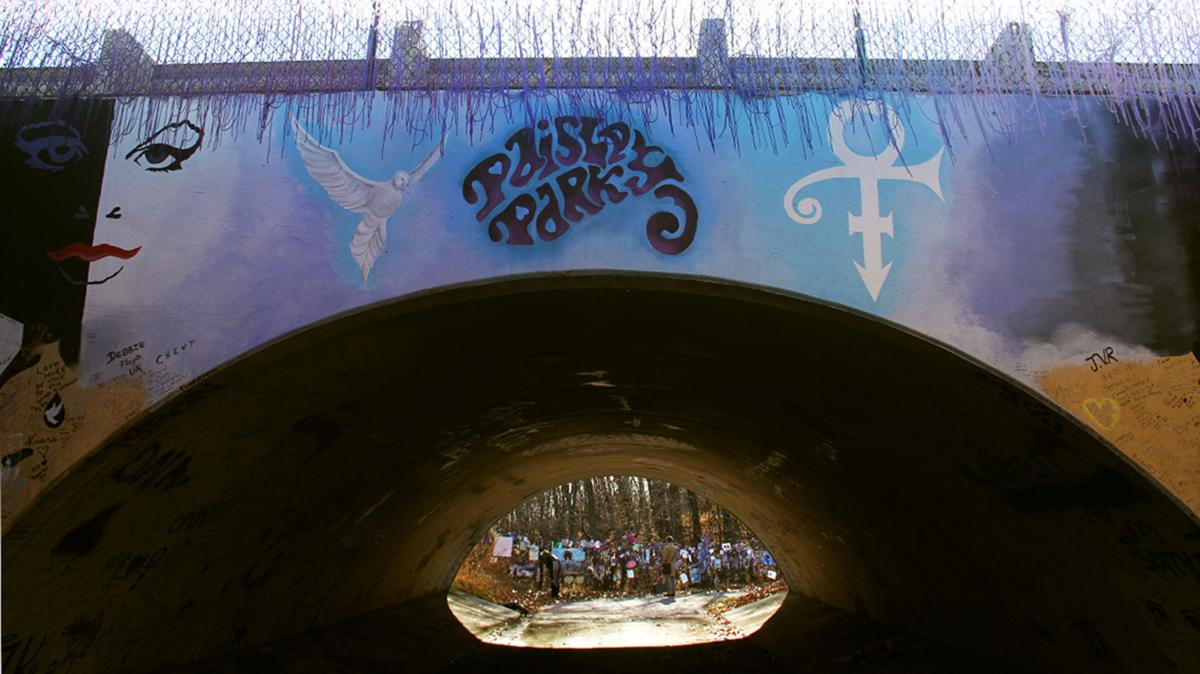 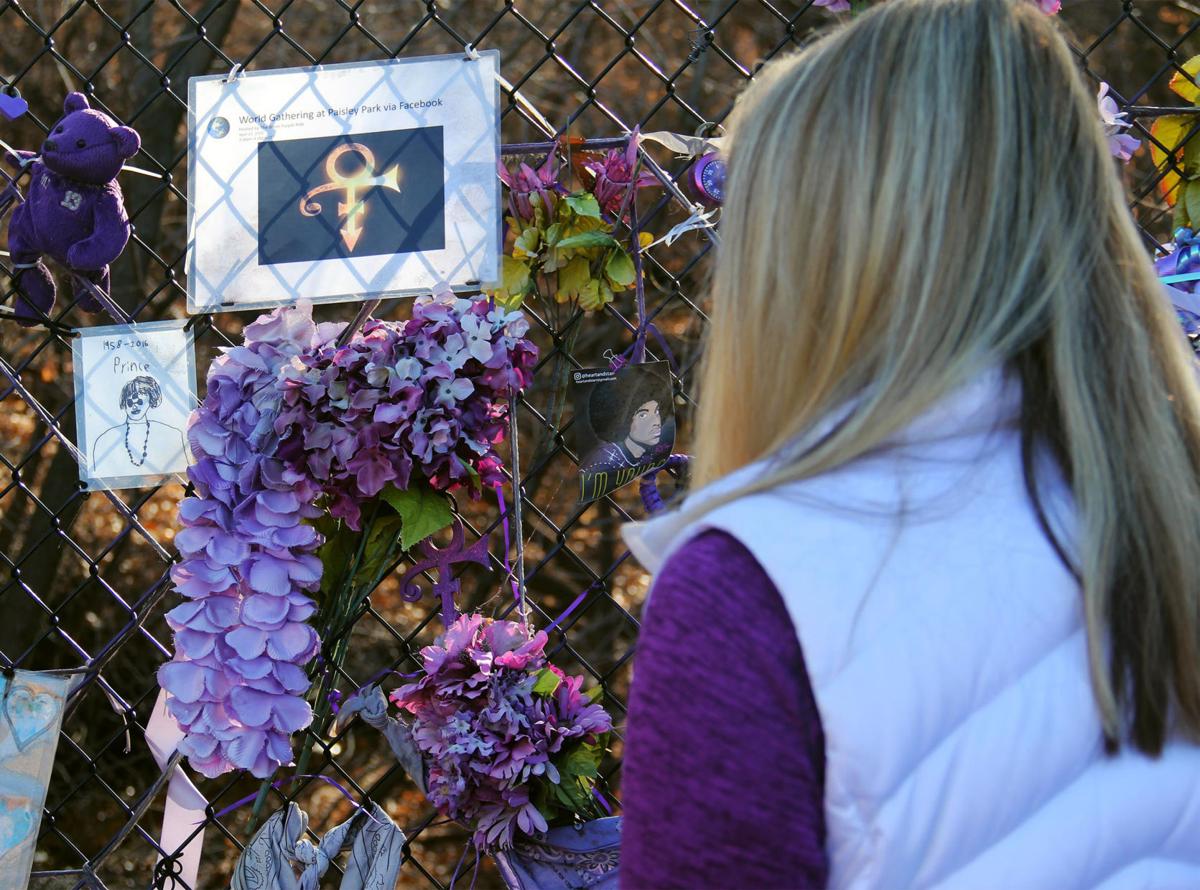 An onlooker pays her respects to Prince in Chanhassen near Paisley Park. 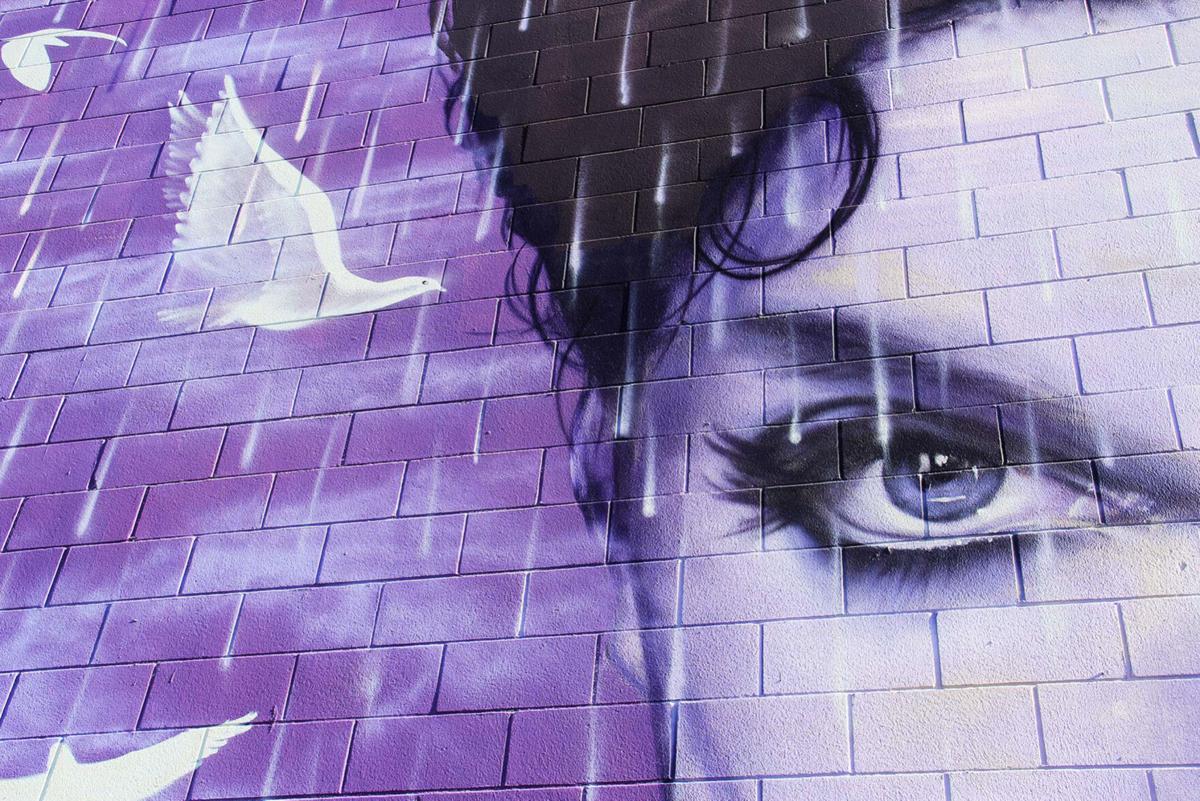 A close up look at a mural by Mr. G on the exterior wall of Chanhassen Cinema. Prince frequented the movie theater.

The sun shines down on purple flowers resting next to a “We Miss U” sign along a fence near Paisley Park.

An onlooker pays her respects to Prince in Chanhassen near Paisley Park.

A close up look at a mural by Mr. G on the exterior wall of Chanhassen Cinema. Prince frequented the movie theater.

Fans from across the Twin Cities metro stand shoulder to shoulder, swaying back and forth as a powerful voice echoes on stage inside Paisley Park.

A flamboyantly dressed purple figure, standing at 5-foot-3-inches, serenades the audience with “Purple Rain” as the line outside the studio grows long in the early morning hours of a crisp, fall, Midwest day.

On a summer afternoon, Prince Rogers Nelson takes a jaunt on his bicycle near his home in Chanhassen. Dressed in a purple sweatshirt and loose black pants, Prince soaks up the sunshine as his curly, black hair stands firm against the breeze. He is perhaps returning from a coffee run at the nearby Caribou, eating a milkshake at the local Perkins, or simply enjoying a summer day in his neighborhood.

While the world knew him as a rock star, Chanhassen knew Prince as a neighbor. When Prince Rogers Nelson died on April 21, 2016, the world lost a musical legend, but his local community lost so much more. Growing up in Minneapolis, Prince found a home in Minnesota throughout his life.

Many musicians of Prince’s status enjoy a life of stardom in the Los Angeles area. However, like many other things Prince did, he was not one to follow the crowd. Instead, he settled down in a place where he could live as close to a normal life as possible.

Prince found a home in Chanhassen. Here he owned over 200 acres of land, including various sites where he once lived. He famously resided in a purple house on Lake Riley in the early 1980s, around the same time he released one of his greatest hits: “Purple Rain.”

Prince left his purple house in 1985 and purchased 188 acres of land on Galpin Boulevard, located on the other side of Chanhassen. Here he built a house, a gatehouse and also purchased two houses in the neighborhood across the street from his property to protect his privacy.

In 1987, Prince expanded his footprint in Chanhassen when he built a $10 million, 65,000-square-foot complex off Highway 5. Prince wanted a complex where he could live, record music, rehearse and perform all under one roof. This compound is famously known as Paisley Park, named after his popular 1985 release.

Prince had his fingerprints all over the city, and many residents have a story to share about him. It was known that he enjoyed bike rides around town, he shopped at Lunds & Byerlys, he watched movies at the cinema, and he drank coffee at Caribou. The relationship between Prince and his community worked out well because there was mutual respect.

Longtime Chanhassen resident and Mayor Elise Ryan said the citizens loved knowing that Prince was in the community, but they always respected his privacy.

The legacy preservationist at Paisley Park, Mitch Maguire, said that he thinks Prince was able to develop a relationship with the people in Chanhassen. He described Prince as being one of the community members and an ordinary guy doing extraordinary things. Maguire also acknowledged the privacy that Prince desired, and he said the residents in Chanhassen really gave that to him.

“Although Prince did live other places throughout his life, he always came back to Paisley, and this was certainly home base,” Maguire said. “I think [the community respecting his privacy] had a lot to do with it.”

Maguire went on to say that in return for the respect and privacy residents showed Prince, he would routinely invite the community into his home for last-minute concerts and parties after dark. Some of the events even ended in a pancake breakfast for the fans on their way out.

Chanhassen resident and Prince fan Lauri Wagaman sought out those opportunities to witness the musical genius in the flesh. In her first concert experience at Paisley Park, Wagaman and her son could not drag themselves out of the venue, despite her son’s recent ACL injury. The two were awestruck by what Prince was creating right in their own backyard.

Wagaman continued to follow Prince closely and eventually found herself at a semi-private, open rehearsal at Paisley Park with around 40 other fans in attendance. She said that Prince would hold these rehearsals to receive feedback from some of his fans. He was constantly working on his craft and loved inviting the community in to see their reactions to his performances and current work.

Prince was known for giving back to the community in more ways than just music. He had a foundation that donated money to the Chanhassen Elementary School and other organizations. Former Eden Prairie News editor Karla Wennerstrom said the world isn’t fully aware of how important Prince was to his community.

“I think people don’t realize how welcoming he was to the community and how much he did for the community,” Wennerstrom said.

The music teacher at Chanhassen Elementary School Katy Anderson said the donation from Prince’s foundation was used to give a much-needed update to the school’s technology and to purchase a brand-new electric keyboard to replace an out-of-tune, old piano.

Anderson said the gift has given the school a sense of connection to Prince that it has held onto over the years.

“I think it added a sense of coolness to music class,” Anderson said. “Prince is cool, and we have something he gave us, so now music is cool!”

Mayor Elise Ryan thinks that businesses really appreciated his humble nature because he supported them privately, so they knew it was genuine rather than a publicity stunt.

The Chanhassen Cinema is one of those locally owned businesses that appreciated Prince’s humble nature. Prince was known as a fairly regular moviegoer at the cinema. He would come to the movies with a small group of friends, his bandmates or even rent out multiple theaters and invite his fans over after a late-night rehearsal or event.

Former manager and supervisor at the Chanhassen Cinema Bethany Geske recalled what it was like working a night with Prince. He would typically come shortly after midnight wearing his typical unique outfits and sneak in the side alley door to keep his privacy. The managers would have his favorite peanut M&Ms and other snack options out, and then he would watch his movie of choice.

Geske said that it was important for her and the other managers to respect his privacy and let Prince be a normal guy for a while. Sometimes he would stop and talk to Geske about the movie he saw, and other days he would slip out without a word.

“You want to respect his privacy and respect that he might just want to chill and not be Prince for a little bit,” Geske said.

Legacy preservationist Mitch Maguire said Prince’s energy lives on at Paisley Park. The creative complex has been turned into a museum so people can continue to celebrate the works of the musical artist. Maguire said that his energy lifts visitors and takes them on a little journey.

Museum collections lead at Paisley Park Makayla Elder said Prince wanted his space to be a museum someday, so he took the time to preserve his wardrobe and shoes. Elder and her colleagues are currently working on an exhibit that will feature 300 to 400 of Prince’s shoes, which is just a portion of his collection.

Paisley Park opened its doors for visitation on April 21, the fifth anniversary of the passing of Prince.

Prince's former property along Galpin Boulevard is currently being redeveloped into 169 lots. Of the 191 acres, 100 acres will be preserved as parkland along Lake Ann and Lake Lucy.

Lennar marketing manager Krystle Nehls said via email that to honor Prince on his old land, the company has worked closely with his heirs as they planned the community. They have named the streets after Prince’s family and song titles. The development is called “The Park” after Paisley Park, and some residents have planted purple flowers around their houses.

Across from the housing development is Longacres neighborhood, which is home to 245 families. Many of these families who have lived in Longacres for an extended period of time remember when Prince used to live on his Galpin Boulevard property.

Prince even owned two houses in Longacres that overlooked his land. He allowed various friends and band members to reside in these homes over the years.

Darkow had one interaction with Prince on her street, and it was as simple as a neighborly, Midwest interaction. Prince was driving down the street one day when Darkow gave him a friendly wave just like she does to anyone else driving by. A purple hand waved back, and he shot her a warm, neighborly smile as he drove off.

“I think a lot of people that have lived here a long time have fun memories of Prince just being a person,” Darkow said.

Maguire said that Prince was a thread that held the artistic community together for so many years which is why people here felt his passing differently than others around the world. Knowing that he was in our backyard meant something to a lot of people.

While the surprise death of Prince has been devastating to the world and the Chanhassen community, Maguire thinks it also serves as a reminder to use our time to the fullest.

“Prince was fond of saying ‘You only need 20 minutes of good sleep and the rest is just a waste of time,’” Maguire said. “He took full advantage of his time here.”

Brendan O’Connor is a second-year student studying journalism and mass communication as well as business marketing at the University of Iowa. He aspires to discover a career where he can combine writing skills with marketing techniques. O’Connor grew up in Chanhassen and attended Holy Family Catholic High School. He wrote this article as a journalism class project.

For more about Prince, visit www.chanvillager.com