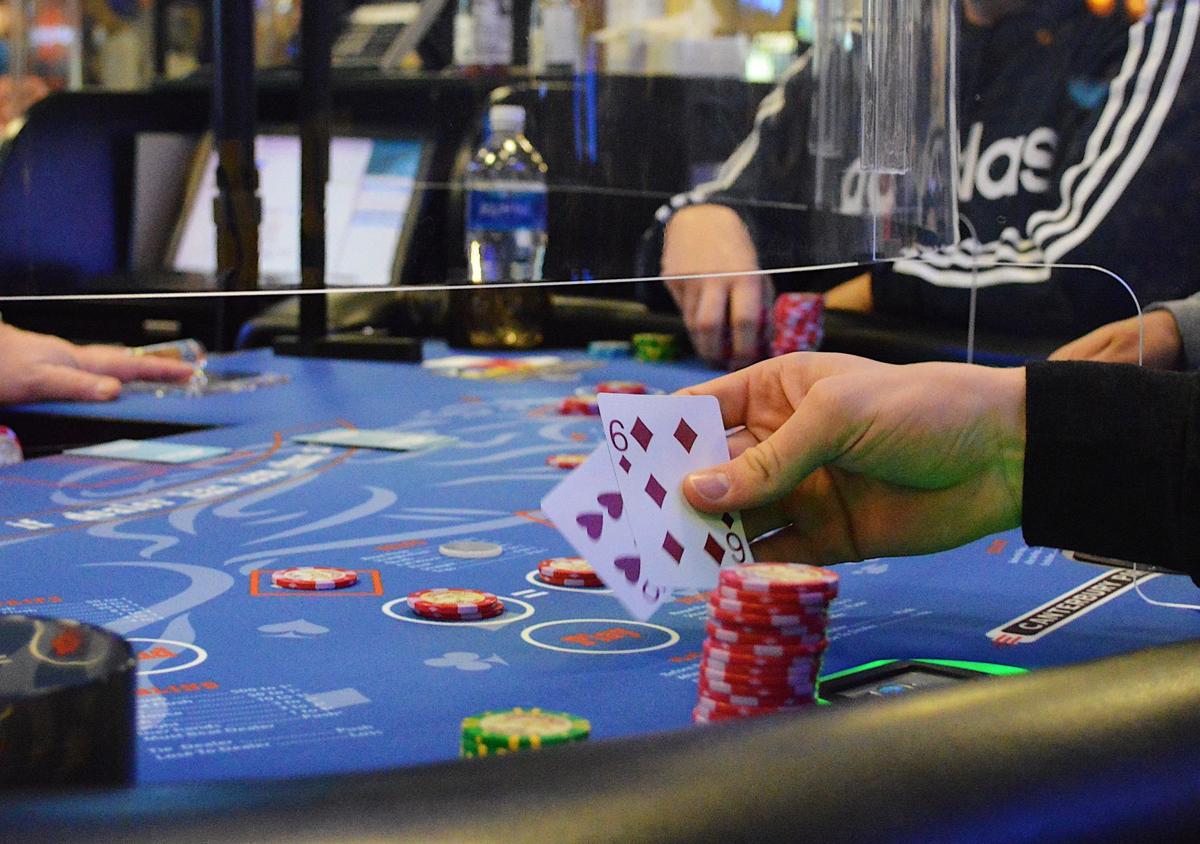 A woman takes a glimpse at her cards at Canterbury Park’s casino on Jan. 15. The casino, which reopened on Jan. 11, now has Plexiglas barriers between guests and the dealer. 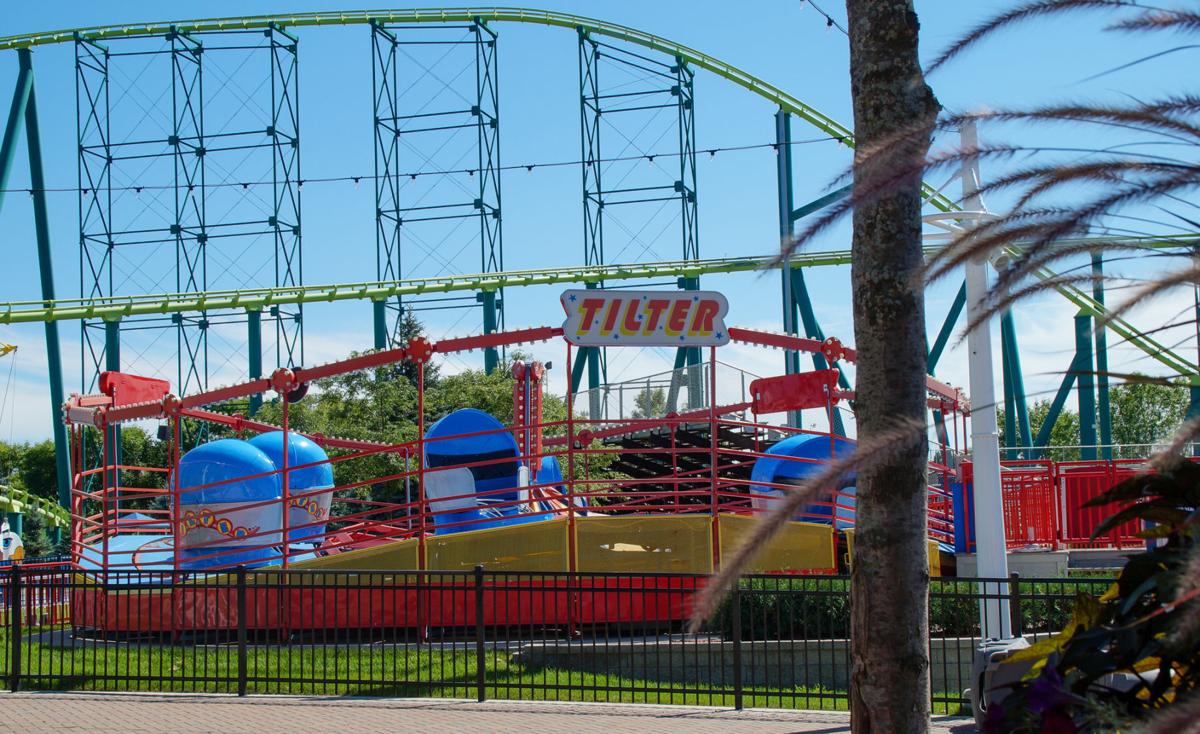 Valleyfair was eerily quiet on a pleasant summer day on Aug. 18, 2020. The amusement park is preparing for the 2021 season, amid uncertainties.

A woman takes a glimpse at her cards at Canterbury Park’s casino on Jan. 15. The casino, which reopened on Jan. 11, now has Plexiglas barriers between guests and the dealer.

Valleyfair was eerily quiet on a pleasant summer day on Aug. 18, 2020. The amusement park is preparing for the 2021 season, amid uncertainties.

“Nothing else to do during a snowstorm,” laughed a player as he slid his chips under the Plexiglas barrier.

After Gov. Tim Walz’s restrictions on indoor dining and entertainment venues were lifted in early January, local southwest metro attractions have begun reopening for the 2021 season.

But with an ever-changing pandemic and a history of emergency closures with just days notice, it’s difficult to plan for an uncertain future.

“That’s the biggest challenge of these big venues; the uncertainty of what to plan for, how to plan for it, and the short amount of time we have to react. We’re all hopeful that there's a mass vaccine roll out, but will there still be restrictions this summer? How do we plan a calendar without knowing? It’s very hard to pivot that quickly,” said Canterbury Park Marketing Vice President John Groen.

Canterbury Park’s parking lot alone holds 10,000 cars — so when capacity restrictions during the pandemic only allowed less than a thousand people, “it was a substantially different feel,” said Groen.

Canterbury has a year-round casino and race book, where players can bet on tracks around the country, and live racing every summer. Throughout the year, they host large conventions and events. But all were shut from March to June, then had to close again in November. Instead of the 450,000 fans they normally saw each year, they had around 50,000, he added.

“It was a very challenging year. Financially was only one aspect, it was also emotionally taxing. It’s hard to not have our team members working, not putting out that excitement and energy and atmosphere,” he said.

During the summer, they started catering to a national audience by offering what Groen said is the lowest takeout in the country — the amount of money Canterbury makes on each wager. And since you can’t bet online in Minnesota, they set up a drive-thru where people can pull up, place wages and go back home to watch the races.

Each floor of the now reopened casino can only hold 150 people, so there are wait lists for those looking for a seat. The number of people has also shrunk from six to four per table, and there are Plexiglas barriers between and in front of the seats — chips and cards are slid through a gap underneath.

Dining has also been forced to modify. Though the casino is open 24/7, dining is restricted after 10 p.m., leading to a reduced menu.

But while it’s hard to solidify much, there are some plans on the horizon. In mid-December, the Park’s live horse racing season was approved, with 65 races between May 18 and Sept. 16. The week the casino opened, it hit capacity every day.

“You have to make some assumptions about what could happen. They could be right, they could be wrong. The short time to learn what the next rule is going to be is really challenging for large entertainment venues like ours,” Groen said. “But we’re hoping to welcome back more fans and our whole team someday.”

Not every attraction was able to open last year. Though it petitioned the state to allow reopening with extra safety precautions, Valleyfair in Shakopee stayed closed for its entire 2020 season.

Under Minnesota’s restrictions, theme parks couldn’t hold more than 250 people — a tiny percentage of Valleyfair’s capacity. With such a small number, it just wasn’t worth it to try and reopen, said Communications Manager Kelsey Megard, though its sister parks in other states like Ohio and Missouri could operate.

From May to October, the grounds were eerily quiet as everything was pushed back or canceled. Though full-time staff didn’t have layoffs or furloughs, the closure meant the amusement park couldn’t bring back its 1,500 seasonal employees, leaving the park almost entirely empty.

“Especially early on in 2020, our staff were really focusing on how we could prepare the park to open if we did get the green light. But when we decided to close for the season in August, we started focusing on 2021; what are the costs, what are the capacity restrictions, what can we do to stay open this year,” she said. “We want to bring things back.”

One of those events would have been their Grand Carnivale, Valleyfair’s largest event yet. For 23 days, the grounds would host 150 costumed performers, daily parades, street parties and other entertainment celebrating cultures from around the world. It’s now been rescheduled, as was the Peanuts celebration and long-standing tradition Corn Feast. All 2020 season tickets have also been extended.

It’s hard to plan for the future — “We can’t even go into details on what we’d need to reopen, because everything is so up in the air,” Megard said — but if all goes well, the smell of pronto pups and excited screams will return once again in May.

“We’re in full swing preparing for 2021. I think our Minnesota community is going to absolutely love it,” she said.

The last year has been a series of ups and downs for Chanhassen Dinner Theatres. The Main Stage show The Music Man closed just a few days after its debut, the summer concert series was able to temporarily return, kids camps were forced online, Brindisi’s Pub had to close for two months — but a sense of normalcy may return by the beginning of summer.

The theater is currently working with last year’s ticket holders to rebook with priority after last year’s shows were canceled, and will announce new dates for its Main Stage shows in early February, said Communications Manager Kris Howland. The theater also announced concert series  dates through May.

“When we announced the reopenings, the box office was so busy that we could bring back five employees to manage calls,” Howland said.

Kids and teens summer camps will also return in person from July 5 to Aug. 9, added Camp Coordinator Brennen Thomas. One youth camp has campers learning classic musicals, while a teen camp teaches Broadway. They’ll also begin streaming its end of camp performances so friends and family can watch from home.

“There’s just something special about being in person, especially for our younger campers. That socialization aspect is so important,” Thomas said. “It brings joy to see kids feel that energy in the theater and really get into it.”

After the dinner theater's adjacent bar/restaurant Brindisi’s Pub was closed for indoor dining from November to early January, its tables have been filled since last week (at the required 50% capacity), Howland said. Happy hour is back, there is live music on Thursday nights, and people seem excited to return.

“We’re optimistic with the new vaccines and that things are going to improve. We really, really want to get back to what we are so good at and what people are missing,” Howland said. “We’re very grateful for everyone sticking by us and trusting us.”