Free access for current print subscribers
Get Started
You are the owner of this article.
Edit Article Add New Article
You have permission to edit this article.
Edit
Subscribe
Communities
Home
News
Sports
Obituaries
Classifieds
Contact Us
Share This
1 of 11 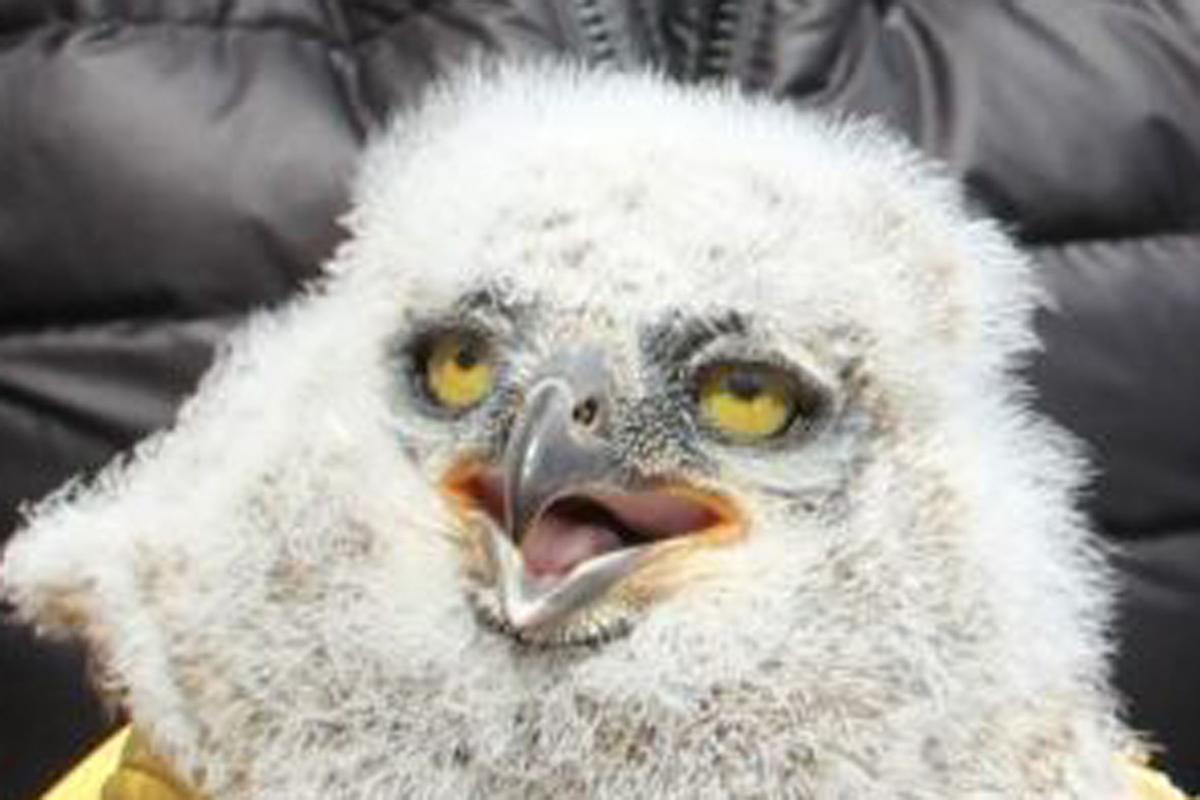 An owlet, before being returned to its nest. 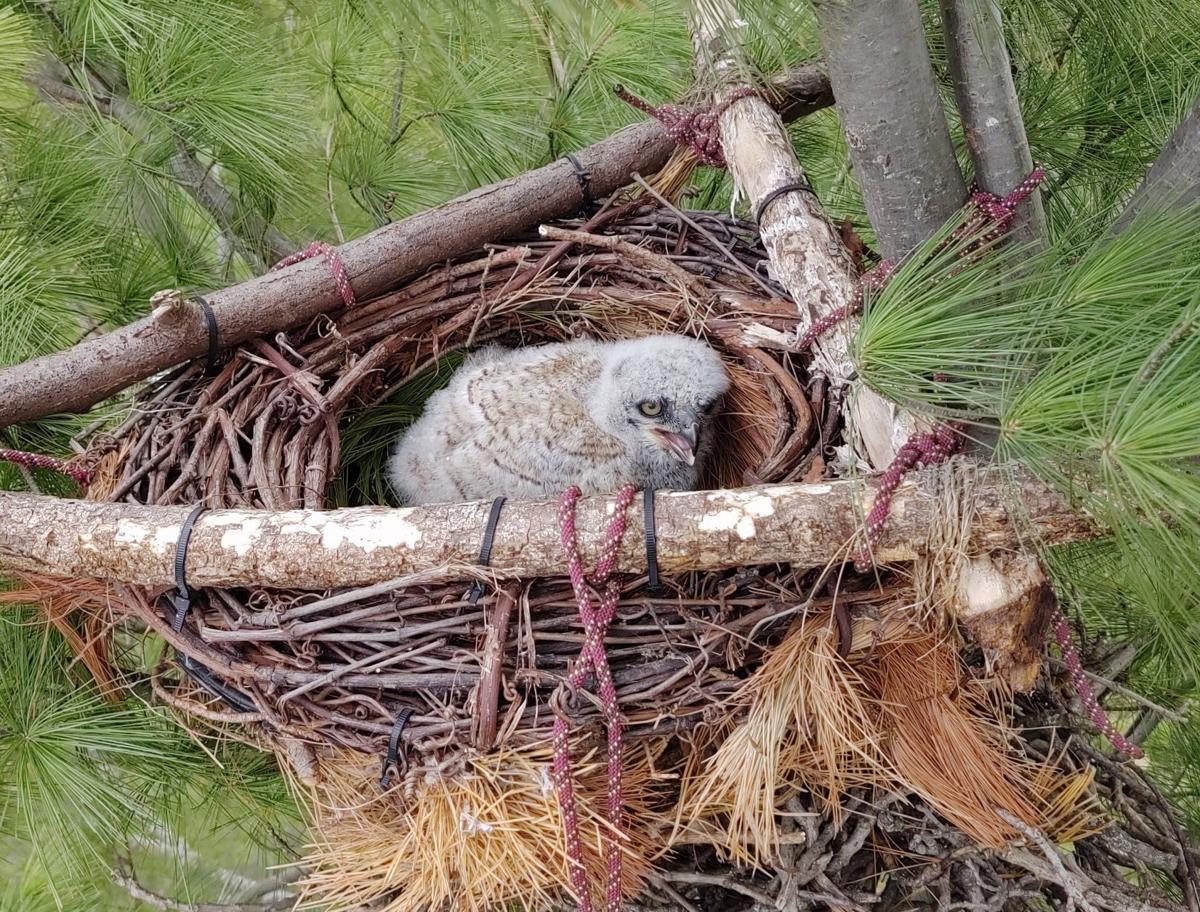 The great horned owlet nestled in its new and more secure nest. 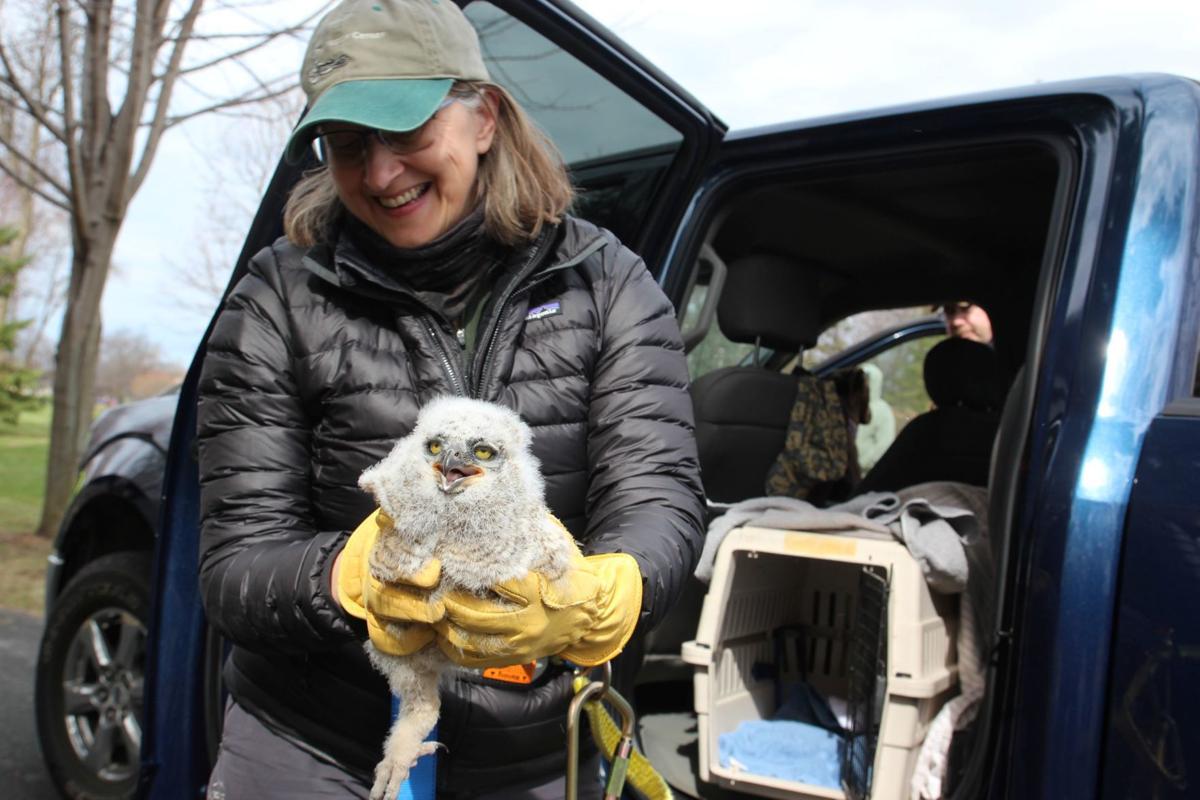 Gail Buhl of The Raptor Center, St. Paul, with the great horned owlet she returned to its nest, located in a St. Hubert Cemetery pine tree, on April 8. 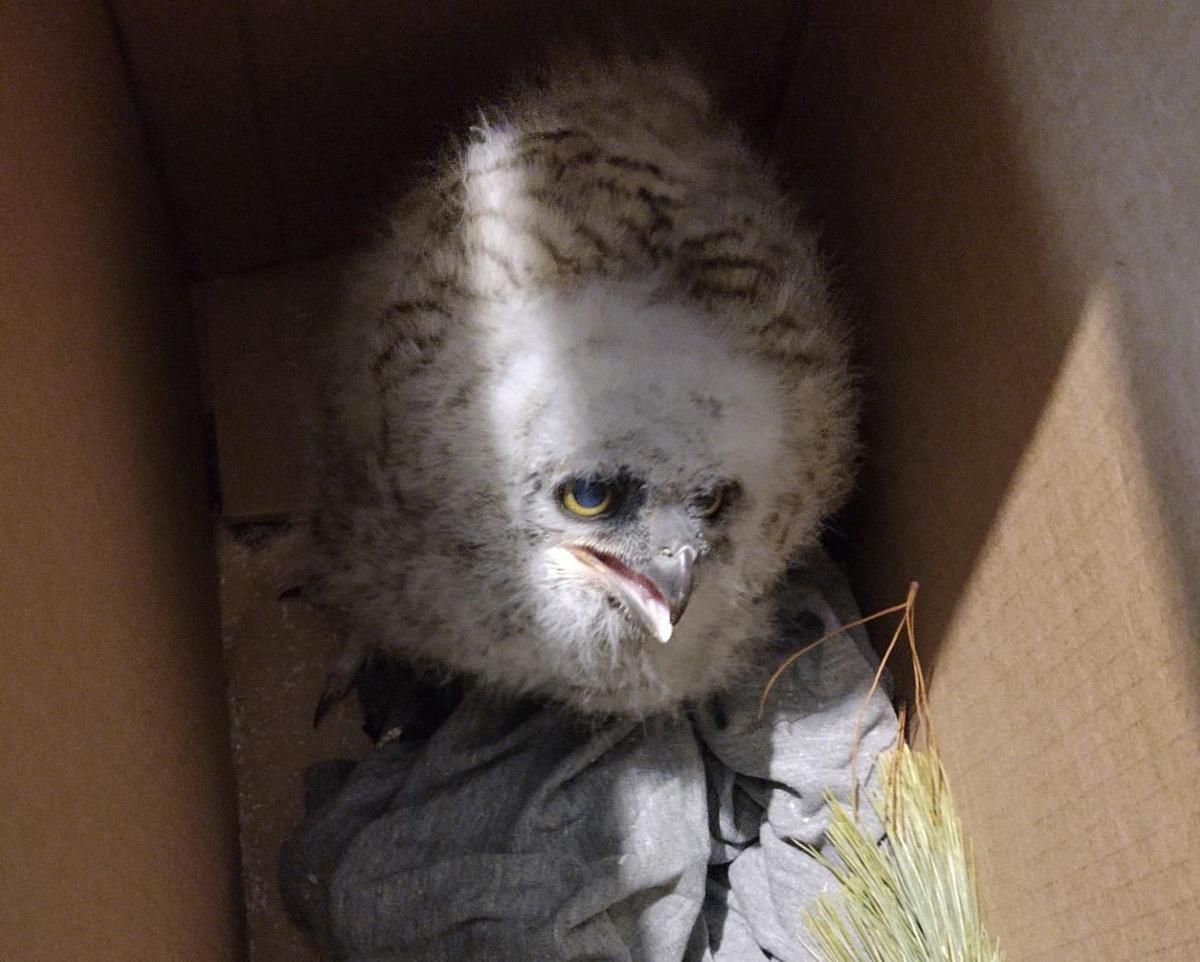 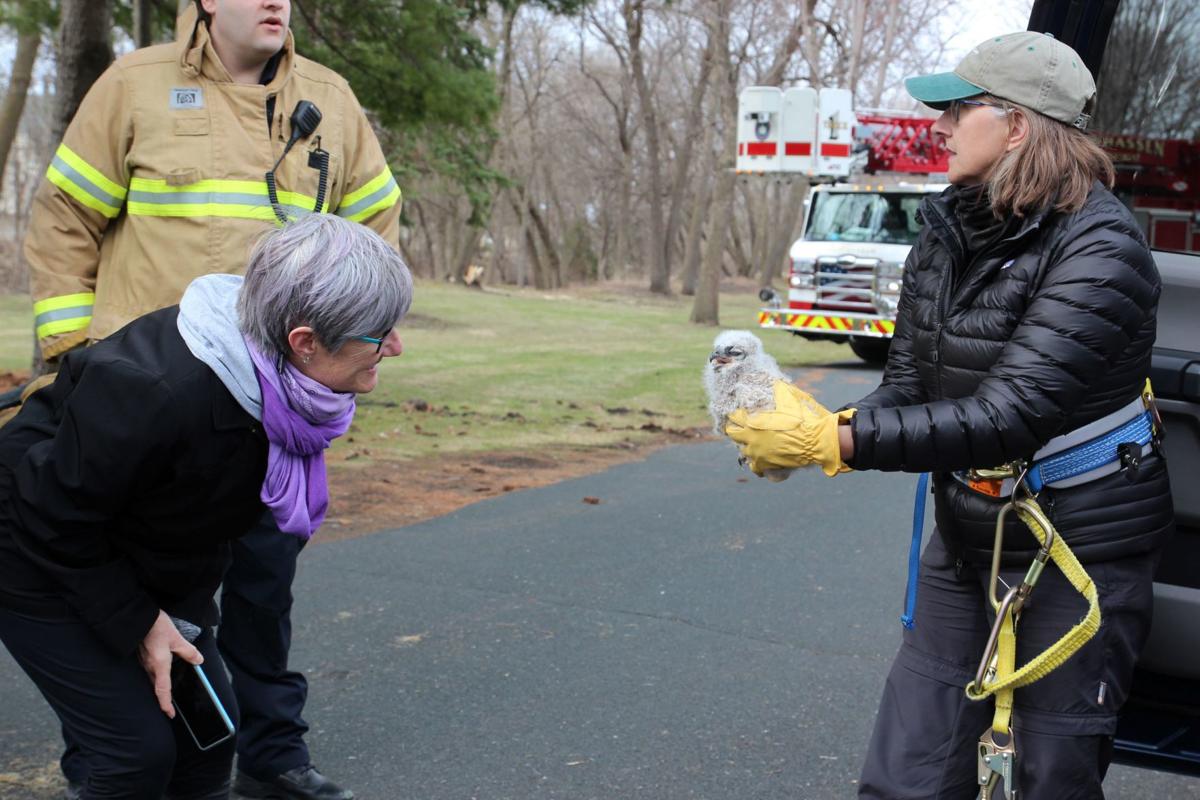 Paula Atkins takes another look at the baby owl being held by Gail Buhl of The Raptor Center. 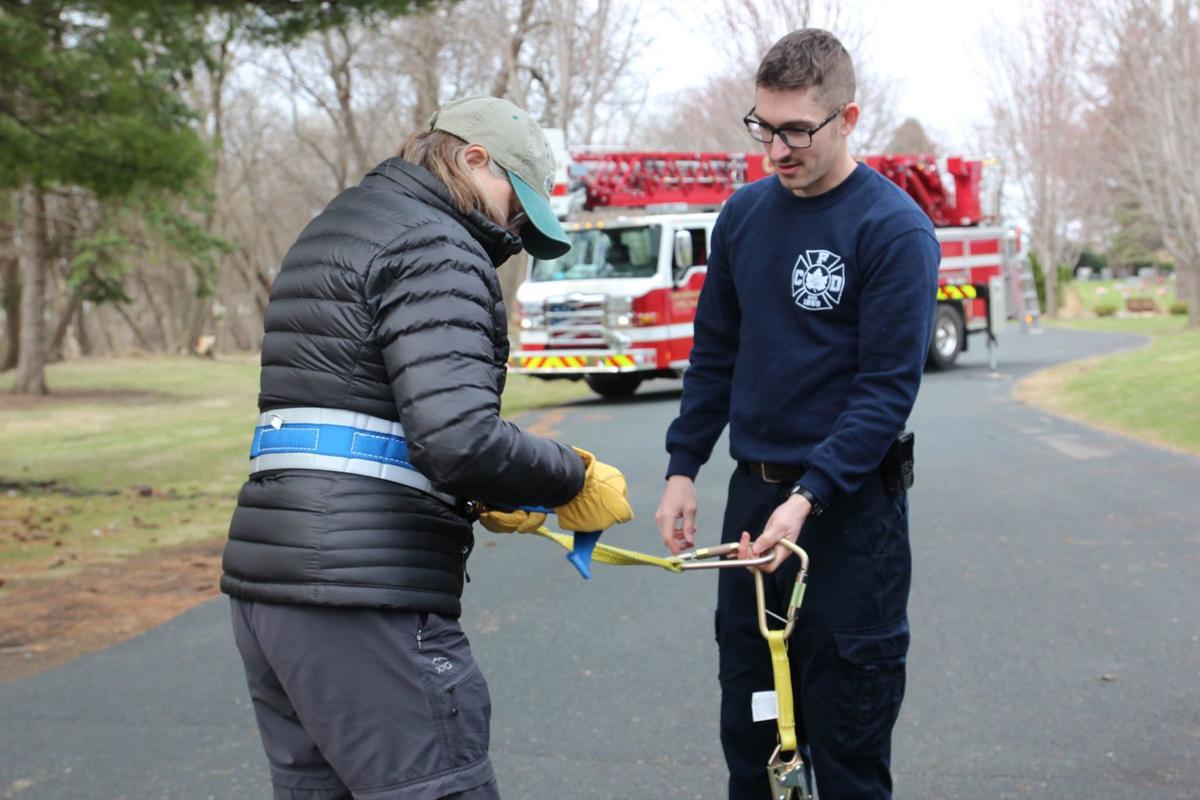 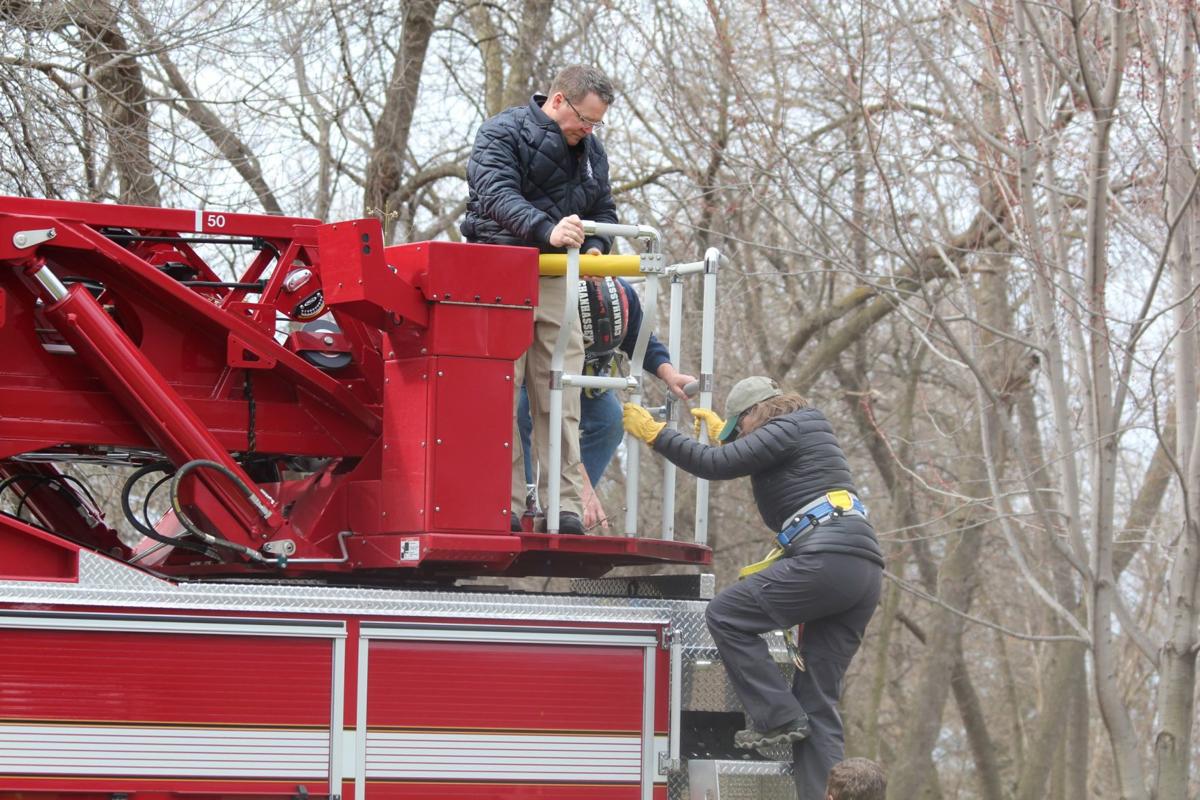 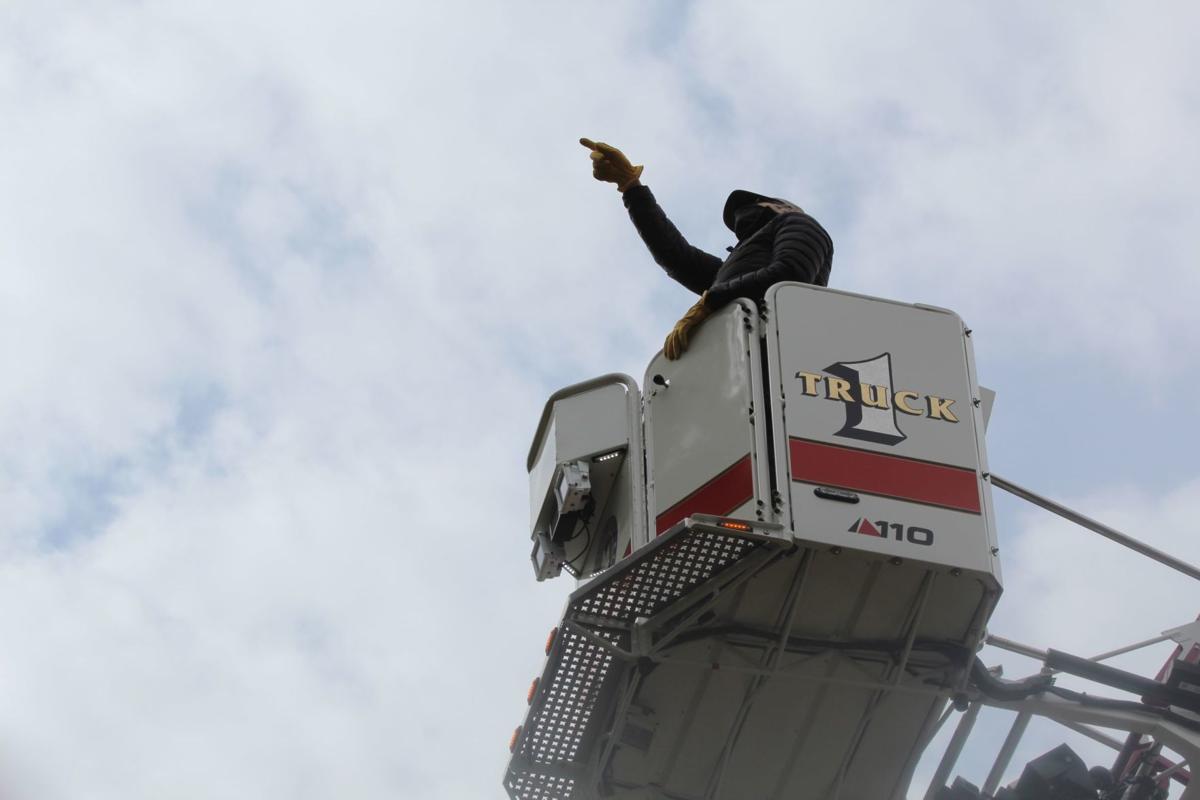 Gail Buhl points to where the bucket needs to go to reach the nesting site. 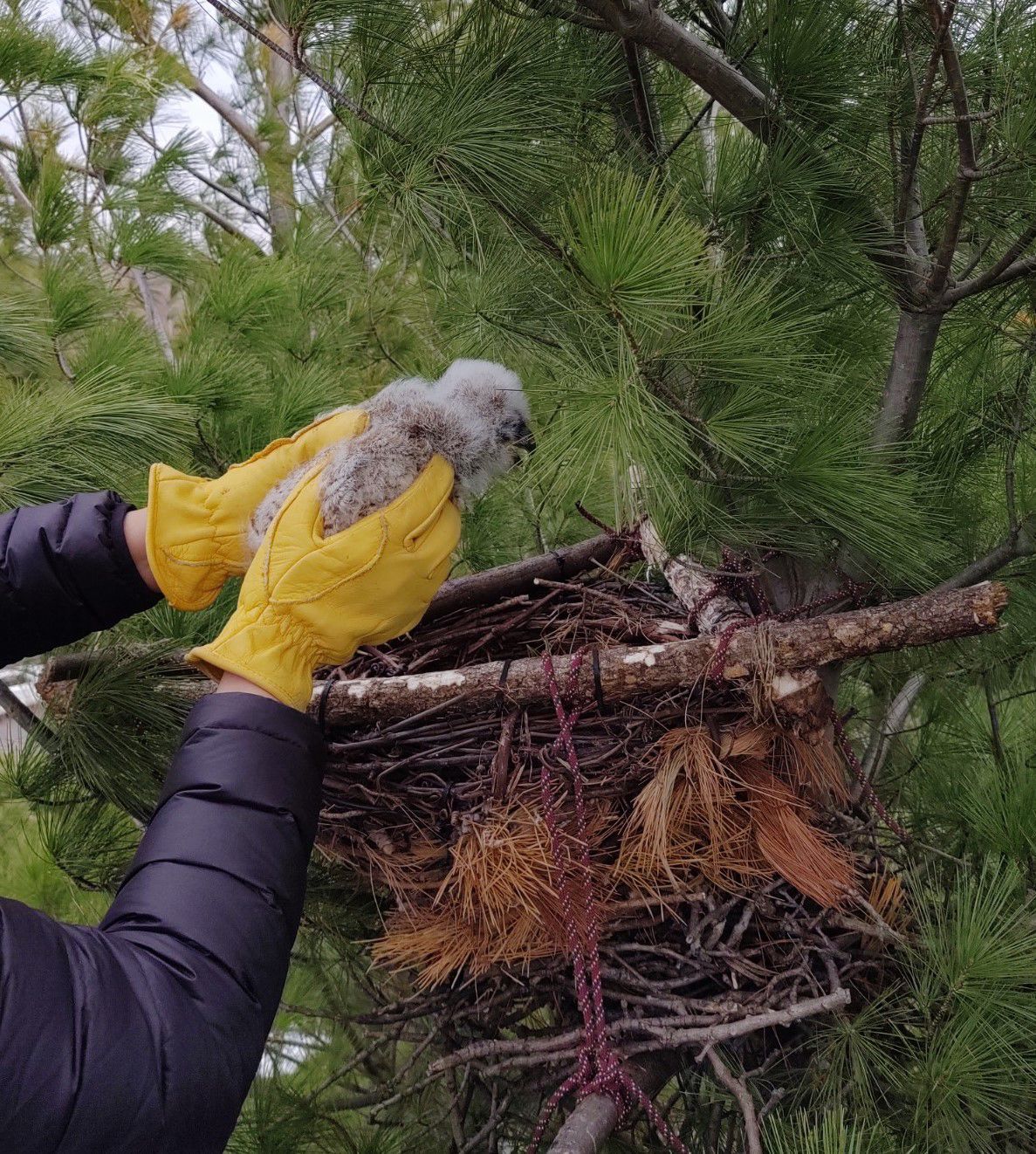 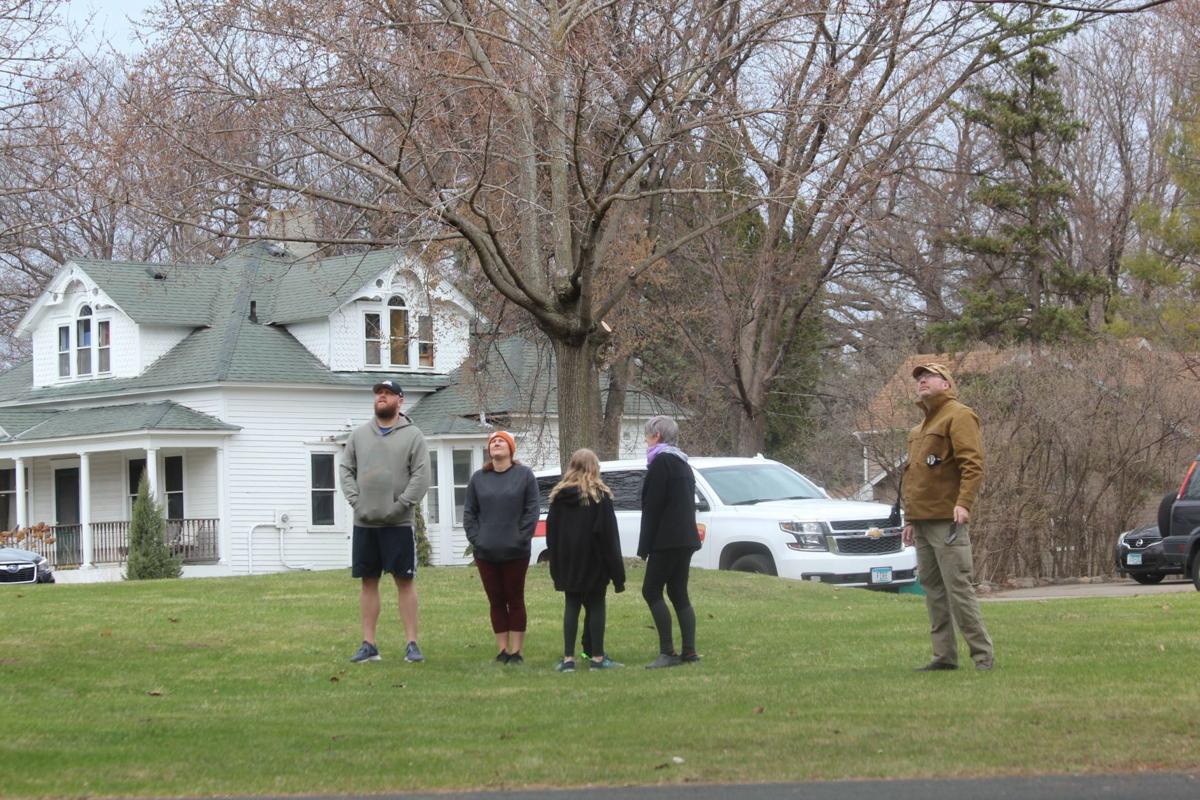 Watching from below. From left, Mark, Lucy and Fiona Haukoos, Paula Atkins, and Brad Johnson. 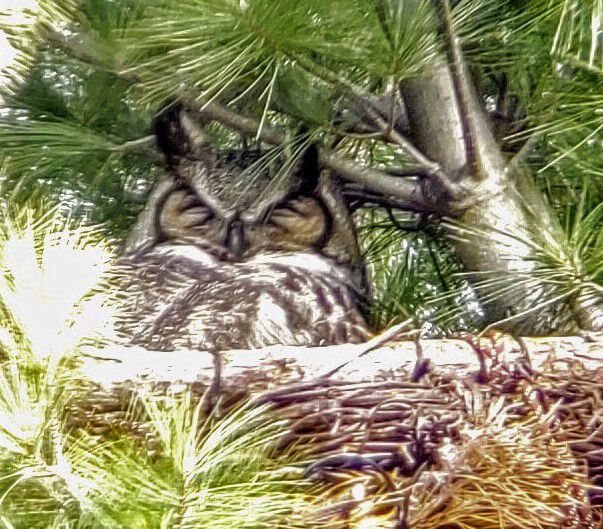 Great horned owls are terrible nest builders but wonderful parents. One of the parents took a nap while nesting with its owlet.

An owlet, before being returned to its nest.

The great horned owlet nestled in its new and more secure nest.

Gail Buhl of The Raptor Center, St. Paul, with the great horned owlet she returned to its nest, located in a St. Hubert Cemetery pine tree, on April 8.

Paula Atkins takes another look at the baby owl being held by Gail Buhl of The Raptor Center.

Gail Buhl points to where the bucket needs to go to reach the nesting site.

Watching from below. From left, Mark, Lucy and Fiona Haukoos, Paula Atkins, and Brad Johnson.

Great horned owls are terrible nest builders but wonderful parents. One of the parents took a nap while nesting with its owlet.

Thanks to a couple of observant locals, an owlet (baby owl) was rescued and safely returned to its nest in St. Hubert’s Cemetery in downtown Chanhassen on Wednesday, April 8.

On Monday, Mitch Patterson, a building supervisor at St. Hubert Catholic Community, was dethatching the cemetery lawn when, out of the corner of his eye, he noticed movement in the grass. A closer look revealed an owlet leaning against the tree.

“I’m not sure if that was the moment it tumbled out of the tree, or if it moved and disturbed the nearby pine cones,” Patterson said. He contacted his supervisor Jeff Powers who called The Raptor Center in St. Paul. Throughout the day, Powers kept in touch with The Raptor Center as it made arrangements to return it to the tree and kept an eye on the owlet.

Later that same day, Paula Atkins, who lives across the street from the cemetery, was on a walk with her dog. Her dog found the owlet, and like Powers, Atkins called The Raptor Center. At this time, she was instructed to tip the baby owl into a small cardboard box and cover it with a blanket or towel. The owlet spent the night in the Atkins’ garage. The next morning Atkins and her daughter drove the owlet to Roseville, to Gail Buhl who is a partnership and rehabilitation coordinator at The Raptor Center.

“Normally, the center uses tree climbers from tree services to return baby raptors to their nests,” Buhl said, but after speaking with Atkins, realized the pine tree would be a challenge. Instead of a tree climber, Atkins’ husband Jack, a member of the Chanhassen Fire Department suggested using the department’s ladder truck with a bucket, to return the owlet to its next. Atkins contacted the church for permission and contacted Fire Chief Don Johnson.

At around 10:30 a.m., April 8, Johnson and several firefighters arrived with the ladder truck and parked it beneath the white pine tree. Buhl and her husband Brad Johnson arrived in a black pickup truck. Johnson is a former conservation officer. They were greeted by Atkins’s family — daughter Lucy and her husband Mark Haukoos and their two children Fiona and Gordy.

Buhl opened the door to the backseat of the truck. The owlet was in a small plastic pet carrier covered with towels. Buhl gently removed the towels, then opened the door, reaching into the carrier.

Her hand emerged with a fluffy ball of feathers that had bright yellow eyes and a beak.

Buhl tucked the owlet into a canvas bag, then accompanied by Jack Atkins, climbed aboard the fire truck and across the ladder to the bucket. When the bucket was eye level to the nest, Buhl saw it was in a shambles. “Great horned owls don’t build their own nests,” she said later. “They’ll nest in an old crow’s nest or squirrel nest. They’re terrible at nest building, but great attentive parents.”

Buhl’s husband went to their pickup truck for a man-made nest. Back in the bucket, Buhl and Atkins, trimmed a branch from the site of the original nest, then wired the new nest securely into place. Then Buhl carefully placed the owlet inside its new home, taking some photos.

Back on the ground, Buhl talked to the firefighters and the Atkins family about owls and how, at this time of year, The Raptor Center has had many calls about baby owls being blown out of their nests.

“The nest this mother owl found to lay her egg in was a former crow’s nest,” Buhl said, “and it looked like this winter was tough on it. It was essentially flat with holes in the bottom, And with the wind, it’s no wonder the chick fell out of it. In fact, this morning, another owl baby is being put back into a tree in Stillwater.”

Buhl was delighted to hear Paula Atkins talk about how concerned the neighbors were for the baby owl’s welfare.

Update: As of Monday, April 13, the great horned owl family — mother, father and baby — have settled into their new home in the white pine tree at St. Hubert Cemetery. According to Paula Atkins, the parents take turns watching the owlet during the day; at night they leave to hunt and bring it food. The owl parents have had much company over the weekend, Atkins said, as lots of visitors came to check out the owl family.

Go to www.chanvillager.com to see more photos of the baby owl being returned to its nest.