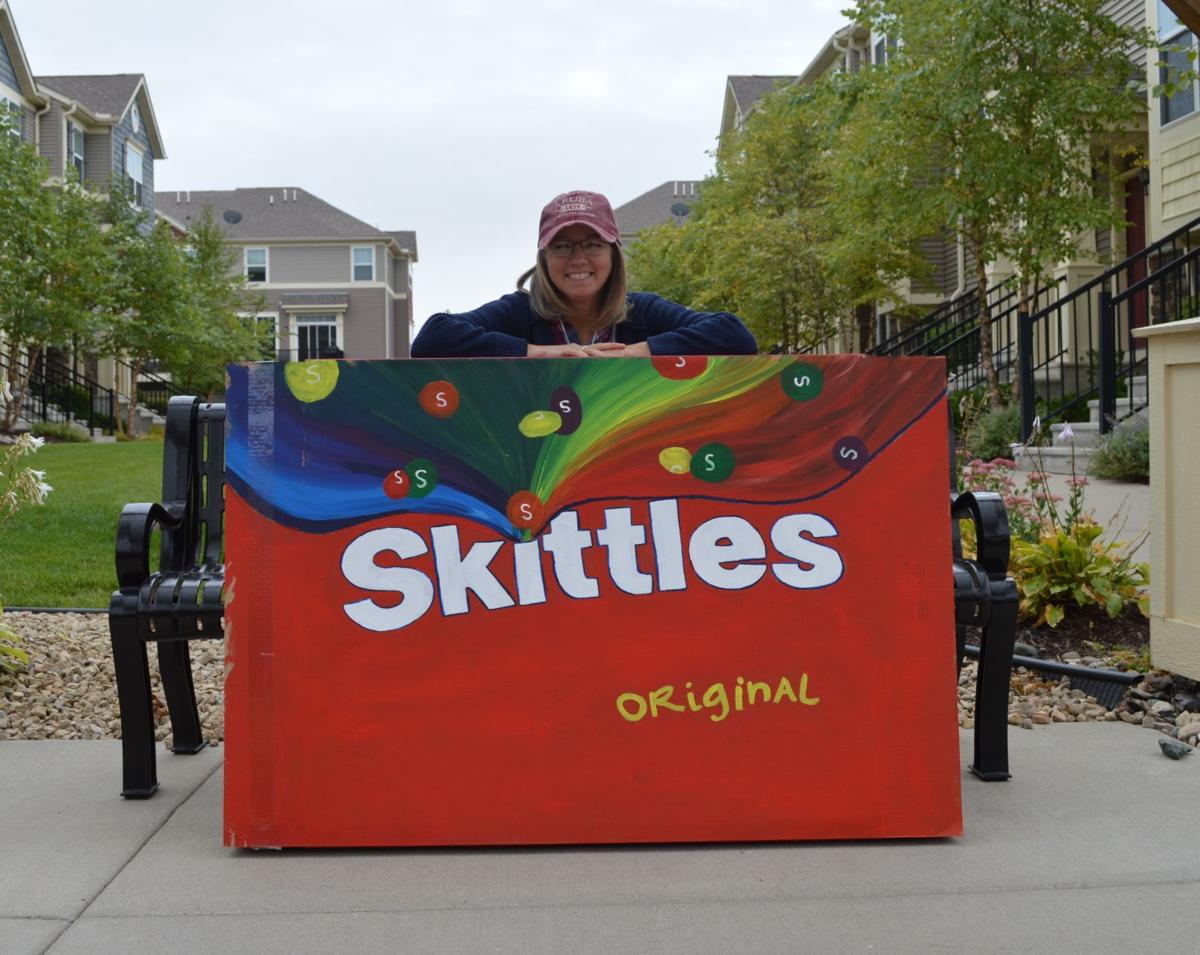 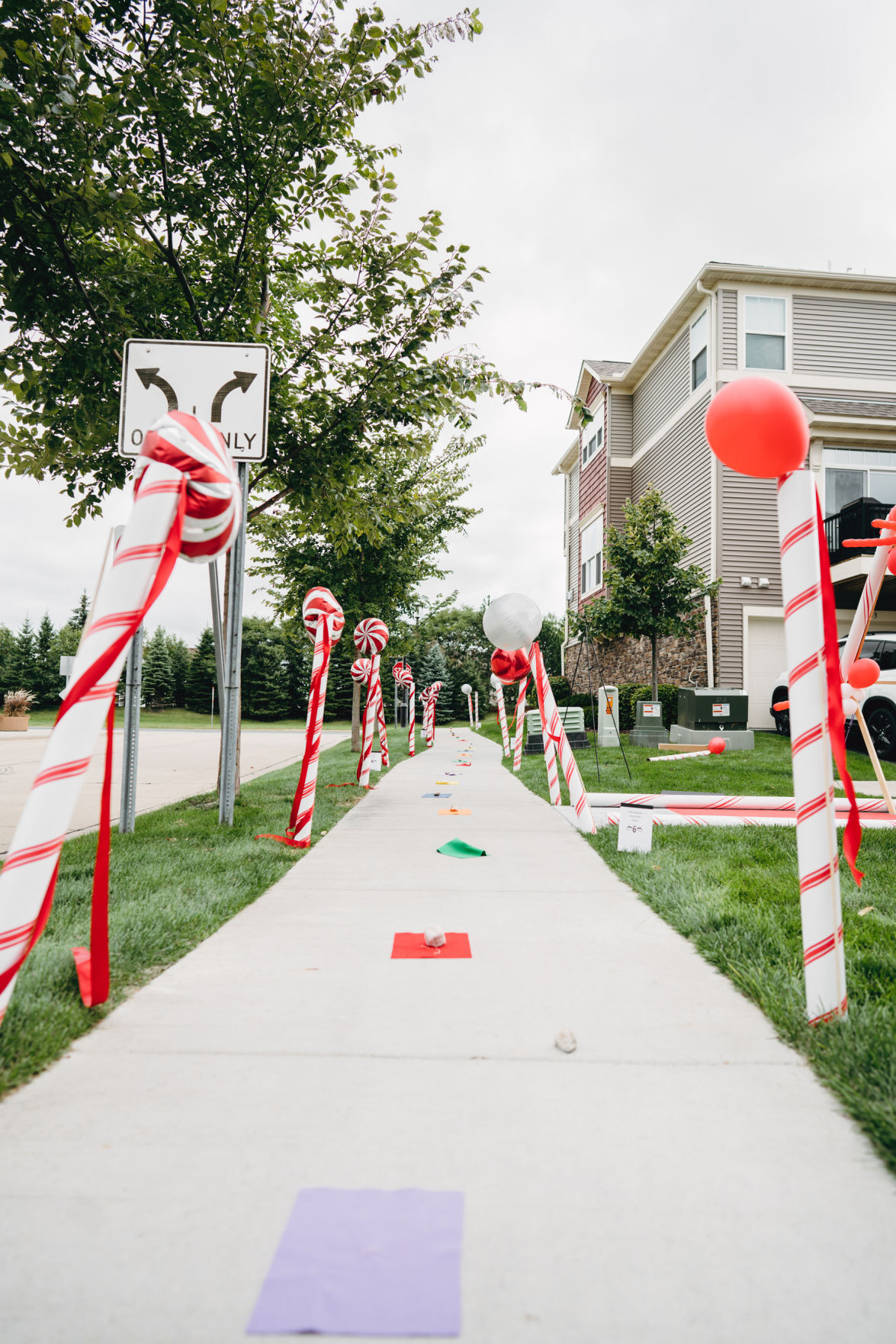 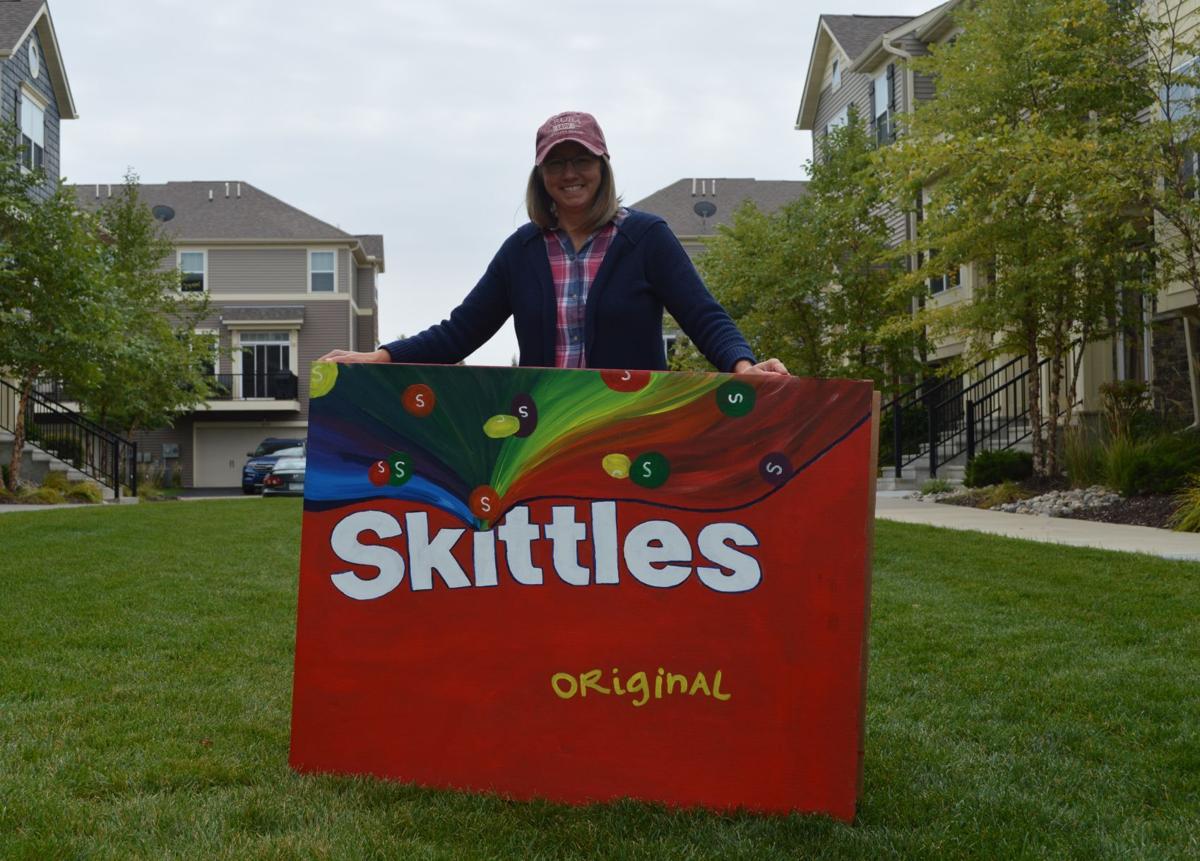 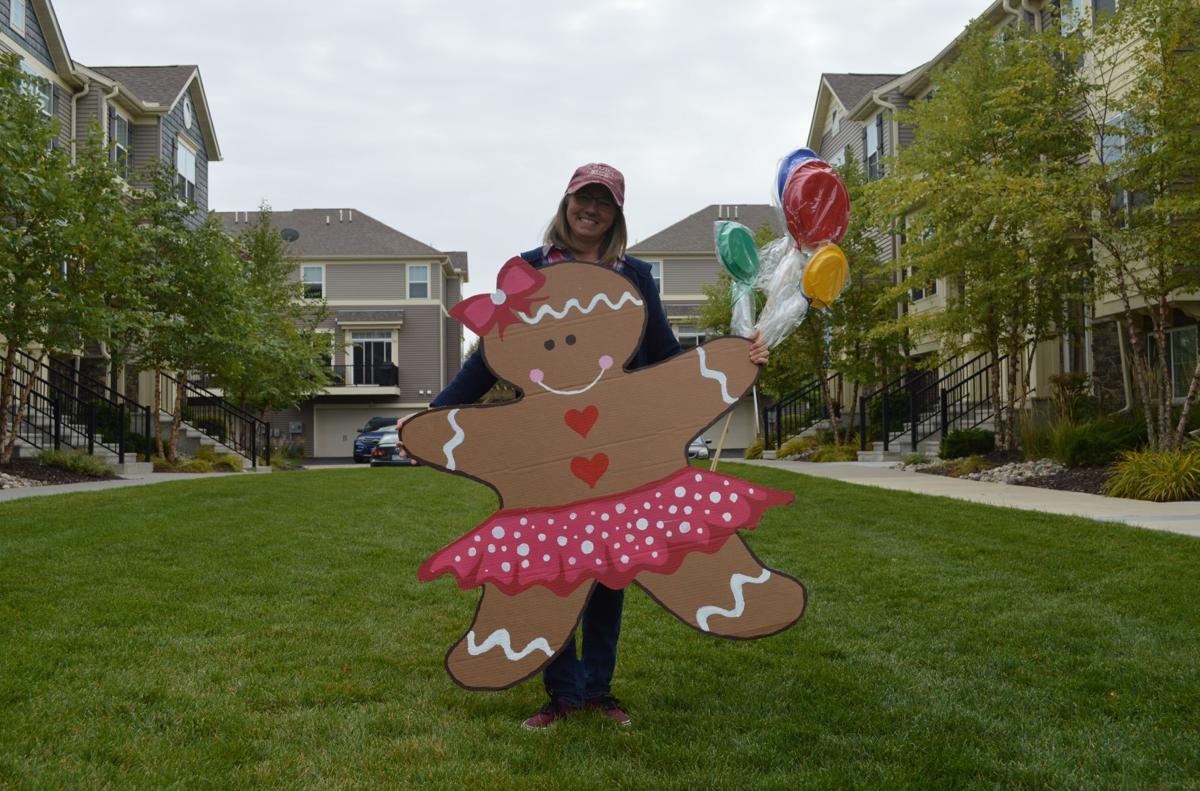 Crystal Alvarez poses with one of several gingerbread women made for her neighborhood Candyland display. 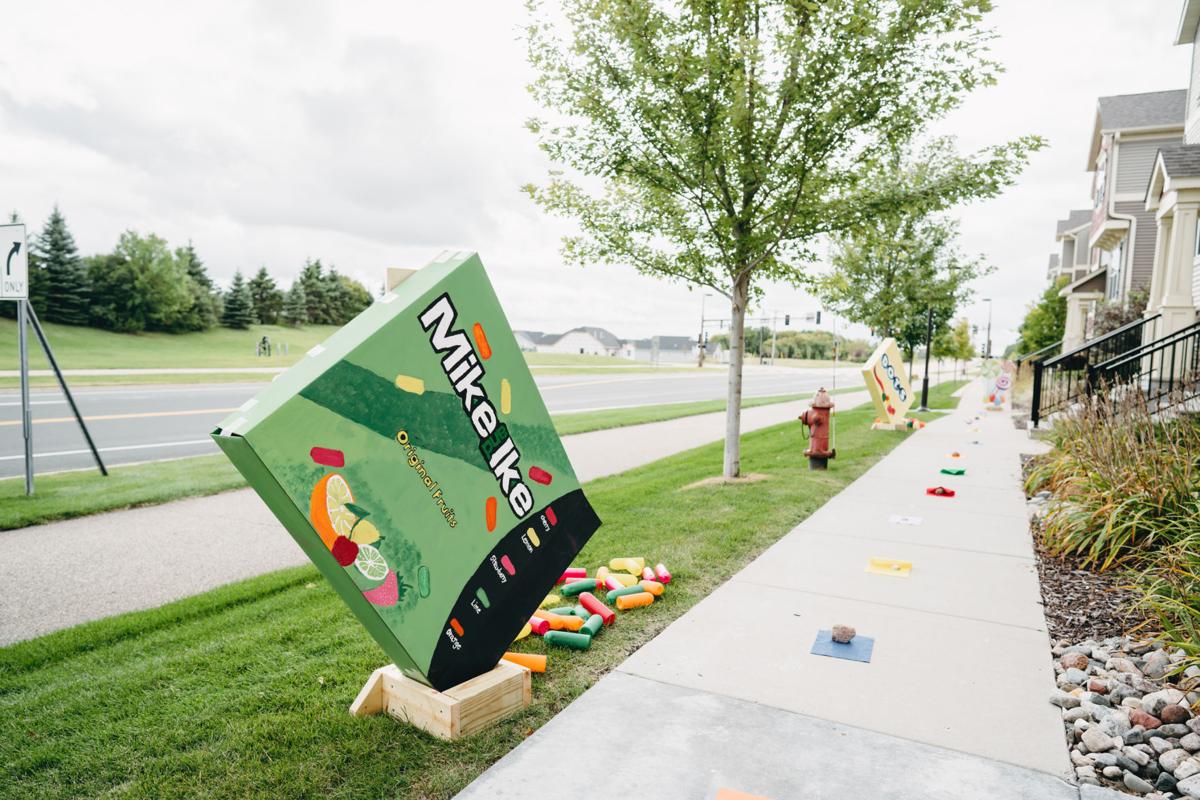 A box of Mike & Ike fit for a giant was part of the Candyland set.

Crystal Alvarez poses with one of several gingerbread women made for her neighborhood Candyland display.

A box of Mike & Ike fit for a giant was part of the Candyland set.

130 giant lollipops. A box of Mike and Ike as big as a 10 year old. An eight-foot-tall ice cream cone. A life-sized gingerbread house. A grand archway made of peppermints.

On a cloudy September afternoon, Southwest Village in Chanhassen transformed into a life-size Candy Land board for over 150 visitors from her neighborhood and beyond to enjoy. Alvarez and her neighbors created hundreds of giant candies from scratch, turning plastic cups into Dots and shipping tubes into rolls of Smarties.

Families drew from their custom deck of cards and navigated through the colored tiles, spacing out their gameplay to ensure social distancing. While the candy pieces were sadly not edible, players received a thank you lollipop at the end, adorned with the names of volunteers.

Alvarez, who has lived in the neighborhood for six years, has over two decades of experience event planning for a local church. But the reason behind Candy Land is even sweeter — Alvarez wanted to do something kind for her neighbors.

“Before this, I really only knew a few people in the neighborhood. But by the time it was done, 32 different volunteers pitched in. I know their names, I know their kids. It was such a wonderful way to get to know everyone,” Alvarez said.

From concept to candy buttons

The idea for a life-sized Candy Land came to Alvarez in the middle of the night — “and I just ran with it,” she said.

The simplicity and playfulness of Candy Land drew her to the game (to be specific, the 1984 classic version). Gameplay is just drawing cards, and the colorful board attracts people of all ages.

“With COVID-19 happening, I wanted to be able to give people something they don’t have to worry about. They can come and have fun with their family and know it’s safe and free,” Alvarez said.

The first step was getting the OK from her homeowner’s association. After that, it was as simple as a SignUpGenius link, a neighborhood-wide email requesting volunteers and a bag of candy with an invite to the event.

Around seven showed for her first meeting in early August, ready to hear her game plan. While many of her neighbors aren’t from the United States and weren’t initially familiar with the board game, they caught on quickly and began creating the hundreds of pieces needed for the event.

Alvarez held three outdoor work days a week for six weeks, with volunteers signing up for slots to ensure not too many people came at once, she said.

Almost every piece was hand-painted and cut — there’s no giant peppermint sticks at the local craft store, so the neighborhood got creative. She used some equipment from her job, but everything else was made from scratch.

When it came to the well-known characters like Queen Frostine and Princess Lolly, the team wanted to avoid trademark issues. So instead, the royal family was reinterpreted as a giant crown covered in glitter and a sidewalk of peppermint sticks.

“It was a labor of love for everyone,” Alvarez said. “Everything ended up quite beautiful.”

One urged her to call the news, which resulted in a Fox 9 spot airing three times over the weekend. The video got popular on social media, and Alvarez received emails and messages from people all over the country asking how she did it.

“One woman even asked if she could rent it,” Alvarez laughed.

When COVID-19 hit in March, Alvarez felt called to do things for her neighbors, no matter how small. There was candy for Easter, homemade chalk in May for a sidewalk art gallery and a sparkling cider and pop party this summer. Her neighbors are open to another big event, though it will most likely be annual.

Candy Land wasn’t just about reaching King Kandy — Alvarez cherished the connections she made along the way.

“I just hope this is an inspiration to people to love their neighbors. It doesn’t have to be grand gestures, but it’s so rewarding. I’ve been blown away by their generosity,” Alvarez said. “I got to interact with the neighbors and learn what great people they are ... otherwise, I would have missed out on it all.”