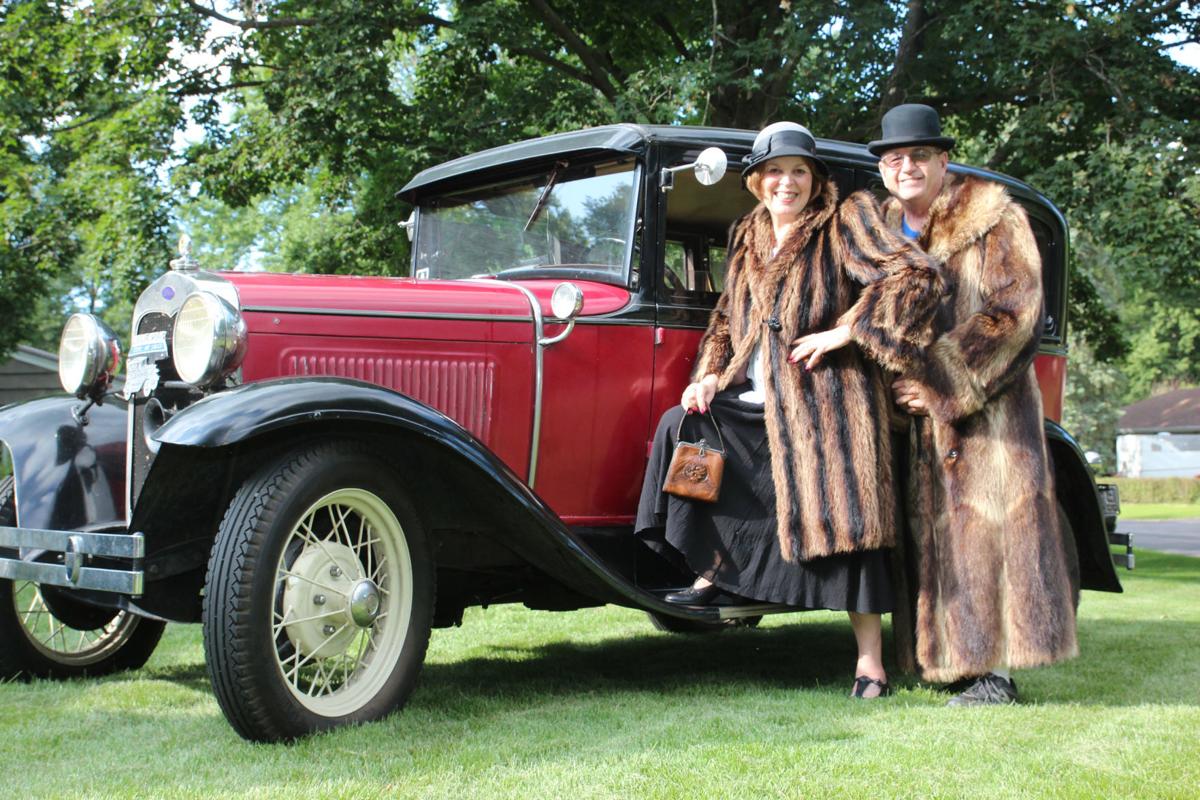 Ain’t they got fun? Leah and Steve Barnacle don’t always dress in period costumes on their motoring excursions, but when they do, it adds to the fun. 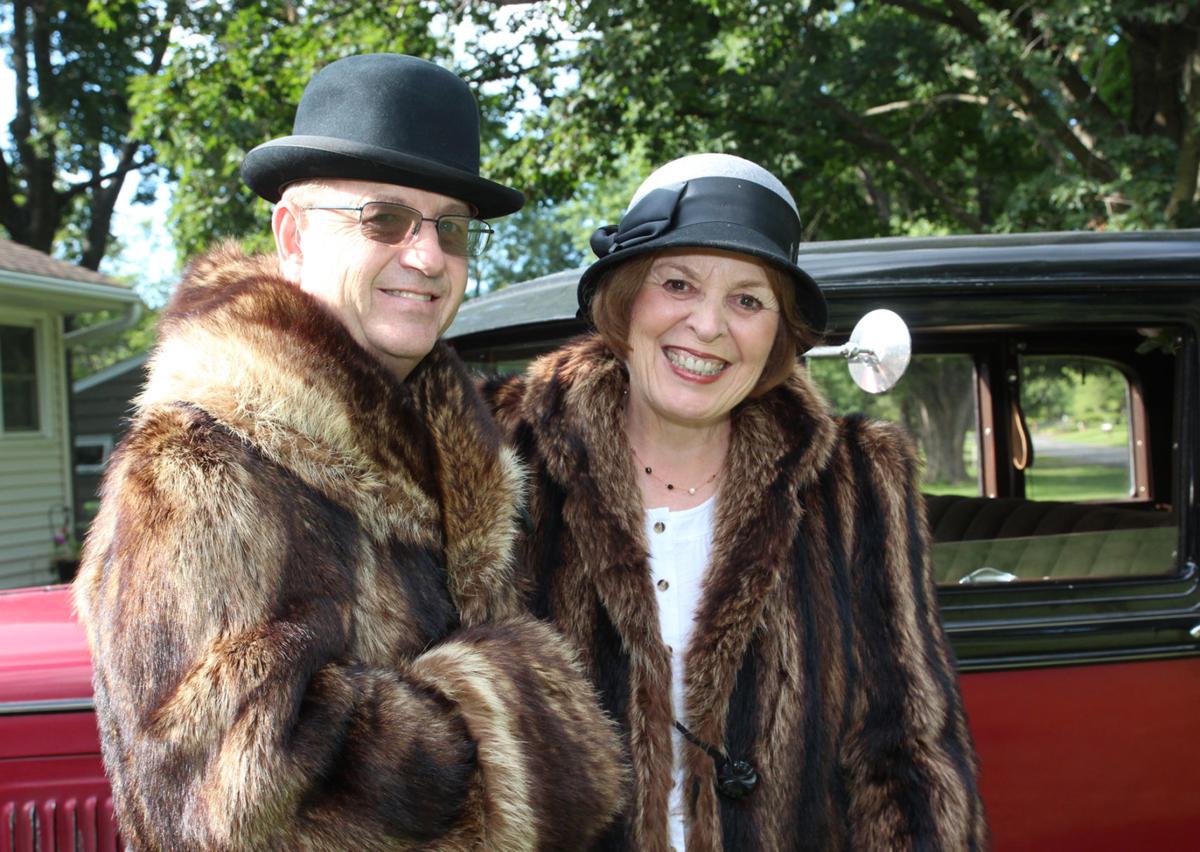 When the weather is crisp, Steve and Leah Barnacle bring out the vintage raccoon coats for motoring in their Model A Ford. 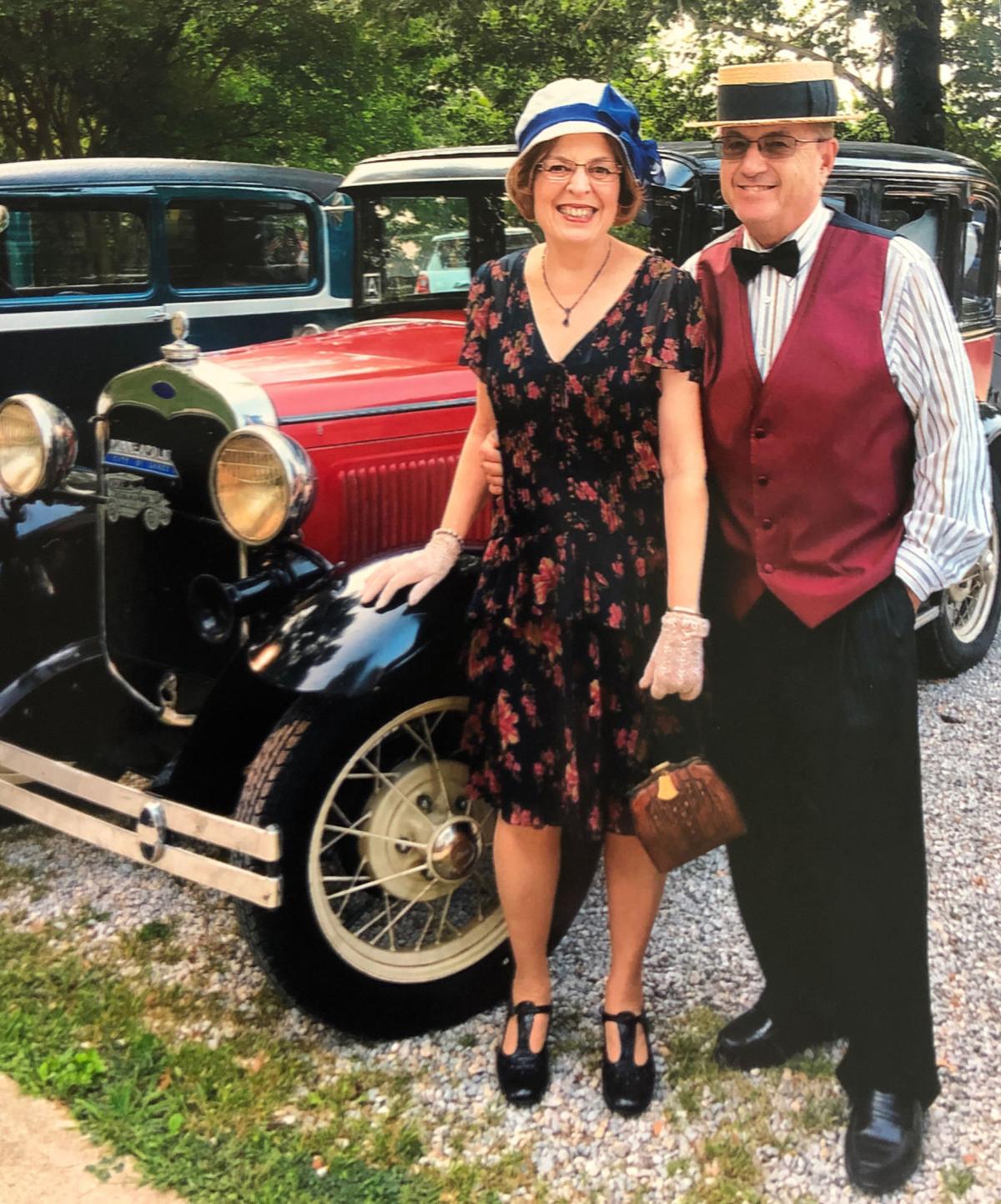 Leah and Steve Barnacle dressed in vintage clothing with their 1930 Model A Town Sedan. 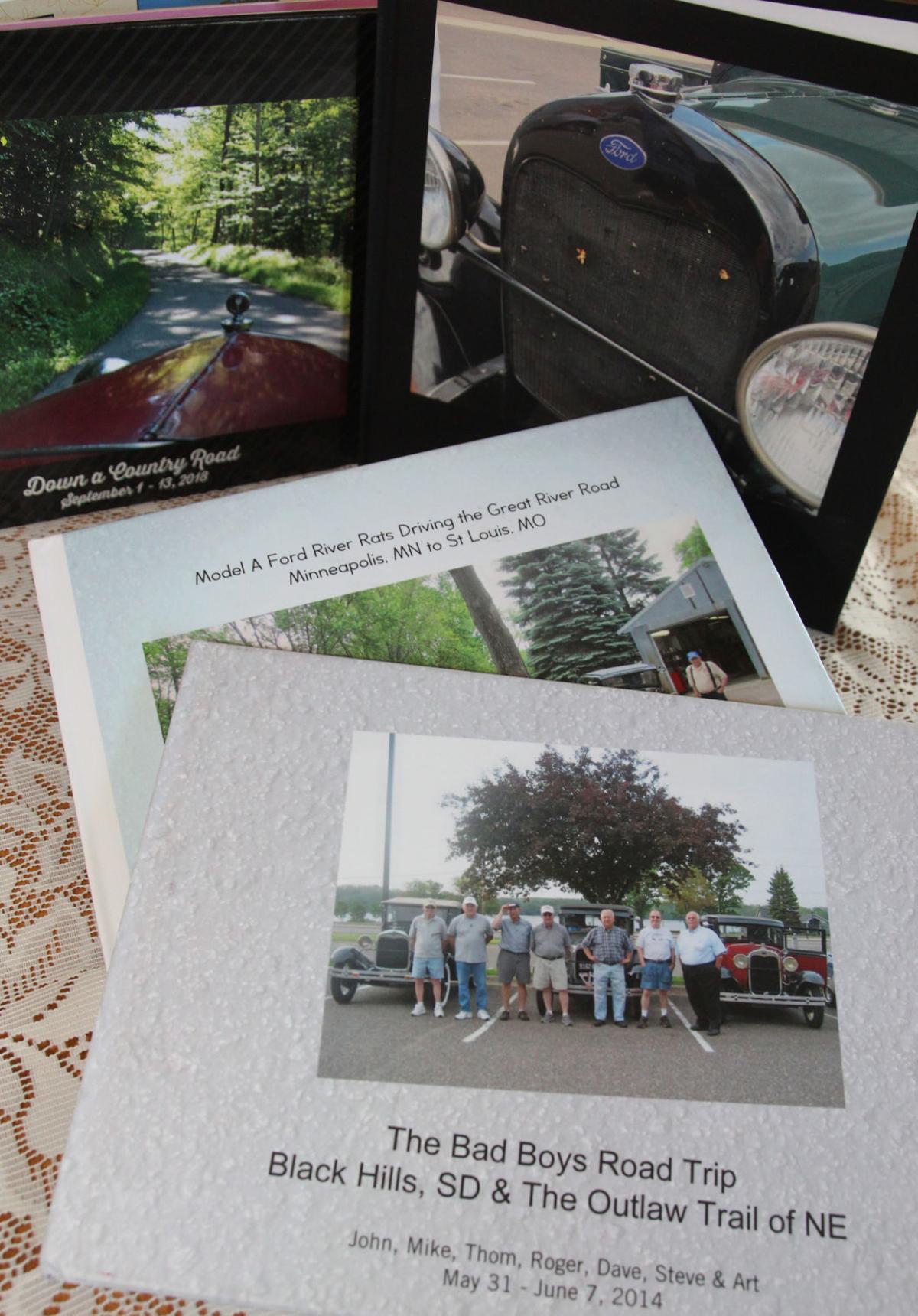 The Barnacles preserve memories of their Model A car trips with photo books. 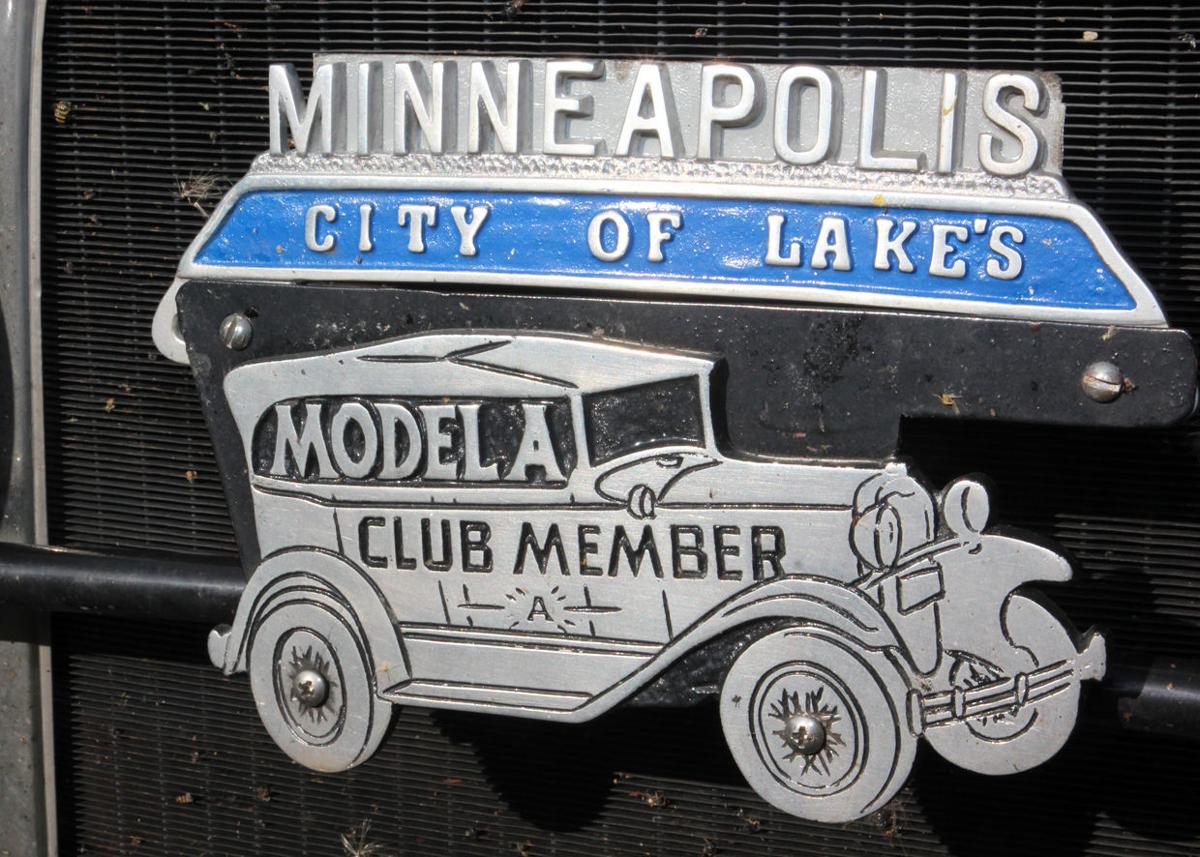 The emblem on their car identifies them as members of the Twin Cities Model A Ford Club.

Ain’t they got fun? Leah and Steve Barnacle don’t always dress in period costumes on their motoring excursions, but when they do, it adds to the fun.

When the weather is crisp, Steve and Leah Barnacle bring out the vintage raccoon coats for motoring in their Model A Ford.

Leah and Steve Barnacle dressed in vintage clothing with their 1930 Model A Town Sedan.

The Barnacles preserve memories of their Model A car trips with photo books.

The emblem on their car identifies them as members of the Twin Cities Model A Ford Club.

One of their favorite pastimes is loading up their 1930 Model A Ford and taking road trips, exploring the byways and county highways close to home in Minnesota and far away, usually no faster than 50 mph.

Currently, the Deephaven couple is on their way to Nova Scotia. And with the help of their Garmin GPS, they’re looking forward to discovering offbeat towns and curiosities along the way.

Steve Barnacle, a Chanhassen native born and raised near Lotus Lake, and his wife, Leah, met at Minnetonka High School. Not only did Steve find Leah attractive, the deal was sealed when he learned her father owned a 1921 Reo Speedwagon, manufactured by R.E. Olds, who founded Olds Motor Company, makers of the Oldsmobile. But we digress.

The Maxwell was more of a parade car that they’d trailer to parades. Thirteen years later — by then, Leah and Steve were married — Steve decided he wanted a vintage car he could drive on the highway. He came across a reproduction Shay 1929 Ford roadster. Shay Motors made reproduction Model A and Model T cars.

“It had a fiberglass body with a Pinto frame,” Steve said. “We had it a year. I was on a Model A tour and the guys were giving me a hard time about it.”

Steve finally gave in and bought his 1930 Model A Ford touring sedan. It needed work and he was willing to invest the time.

As a maintenance manager for a major food company, Steve was accustomed to spending time making things right. As a result, “I’ve had just a few little hiccups on the road. And the biggest draw about the Model A is that Henry (Ford) made 5 million of them, so you can get parts.”

He and Leah drive it everywhere, even to the grocery store. In winter, he stores it in his man cave where he maintains it.

“Every winter, I’ve done something to the car, working on the body, the interior. I replaced the vinyl seats with the original mohair wool upholstery.” The brakes were trickier to fix, but once he figured them out, “that’s when we started taking longer trips.”

In 2012, the couple drove it to Marquette, Michigan for the Model A Ford national convention, whetting the couple’s appetite for long distance trips.

Is it possible to drive cross-country without using the interstates and other major highways clogged with speeding traffic?

“What I try to do, say I want to go from A to B. I turn off ‘Highways’ in ‘avoidances’ on my GPS. Then I start looking at maps, and I go to the Chamber of Commerce of towns along the way. ‘What goes on in this town?’ ‘What’s interesting?’ I look at what’s on the way from A to B. One thing about the U.S. is, every 25 miles there is a gas station.”

As for eating and sleeping, “We used to bring food, but we don’t deal with that. We’ll have snacks and beverages in a cooler, but we don’t eat much while we’re traveling. And you can always find a grocery store if nothing else, even in the smallest towns.” As for hotels, they don’t plan ahead. Instead, about 3 p.m., they’ll look up the next town and check the hotels and motels online. They usually find a nice one that includes breakfast.

To date, they’ve driven parts of the Lincoln Highway, the Yellowstone Trail, Route 66, as well as many drives to small towns around the Twin Cities and the Upper Midwest.

“We’ve been to Menomonie, Pepin, New Ulm, St. Joseph,” Steve said. “We’ve been to Center City, and up to Spooner, Wisconsin, where you can spend the night in a sleeper car. We’ve been to the Andy Taylor Home Inn Bed & Breakfast in Clear Lake, Wisconsin. A guy built a house exactly like Andy Taylor’s house in (the TV show) ‘The Andy Griffith Show.’

“And yes, you can spend the night in Aunt Bea’s Room, Opie’s Room, or Andy’s Room,” Leah said.

The Barnacles couldn’t stay because it was booked, but they learned from the owner that Mt. Airy, North Carolina, the actual town Mayberry is based on, has recreated Mayberry. It prompted their later road trip to West Virginia and North Carolina. That trip was an adventure. Despite making 19 U-turns and misdirection by the Garmin GPS — “I did a lot of mapping on Google maps,” Steve said, “but a lot of times, the roads aren’t marked the same. You’ll be going along, and all of a sudden, no road. So you have to do a U-turn. The Garmin takes you to places you don’t even know.”

“Fortunately, we’re both extroverts,” Leah said. “We don’t have trouble talking to anyone. People will wave or someone drives by and takes photos of us with their phone.”

“If I’m on a two-lane, I will pull over to let people pass,” Steve said. “But sometimes, people will pull up right beside you to talk. And every time you stop for gas, someone wants to know about the car.”

Steve welcomes the attention. “I want kids to be interested. It’s a dying hobby. People my age, we’re the last generation. The younger people are more interested in the muscle cars.”

There’s some roughing it, of course. There’s no air conditioning, no radio. When Leah isn’t taking in the scenery, she passes the time reading. For this trip, Steve has hooked up a Bluetooth speaker to connect to their mobile phone. On this trip, they’ll be able to listen to music, podcasts and books on tape.

For Leah and Steve, traveling in the slow lane gives them a chance to appreciate the journey as much as the destination.

“We have fun getting lost,” Steve said. “In the West Virginia mountains, parts of the road had fallen off. For me, that’s the most fun, seeing the unique, the beautiful, the out of the ordinary. If we see something interesting, we’ll stop. It’s not like the interstate, where everything goes by so fast and you can’t stop.”

Leah and Steve Barnacle are members of the Twin Cities Model A Ford Club. The group is interested in the preservation and restoration of 1928-1931 Model A Fords. It has 250 members, and hosts tours, education and tune-up clinics, and social events. The club tool loan program has more than 75 special tools, along with over 115 books and nearly 50 DVD’s/videos.

For more information, go to www.tcmafc.com.

"People will wave or someone drives by and takes photos of us with their phone.”

"And the biggest draw about the Model A is that Henry (Ford) made 5 million of them so you can get parts."