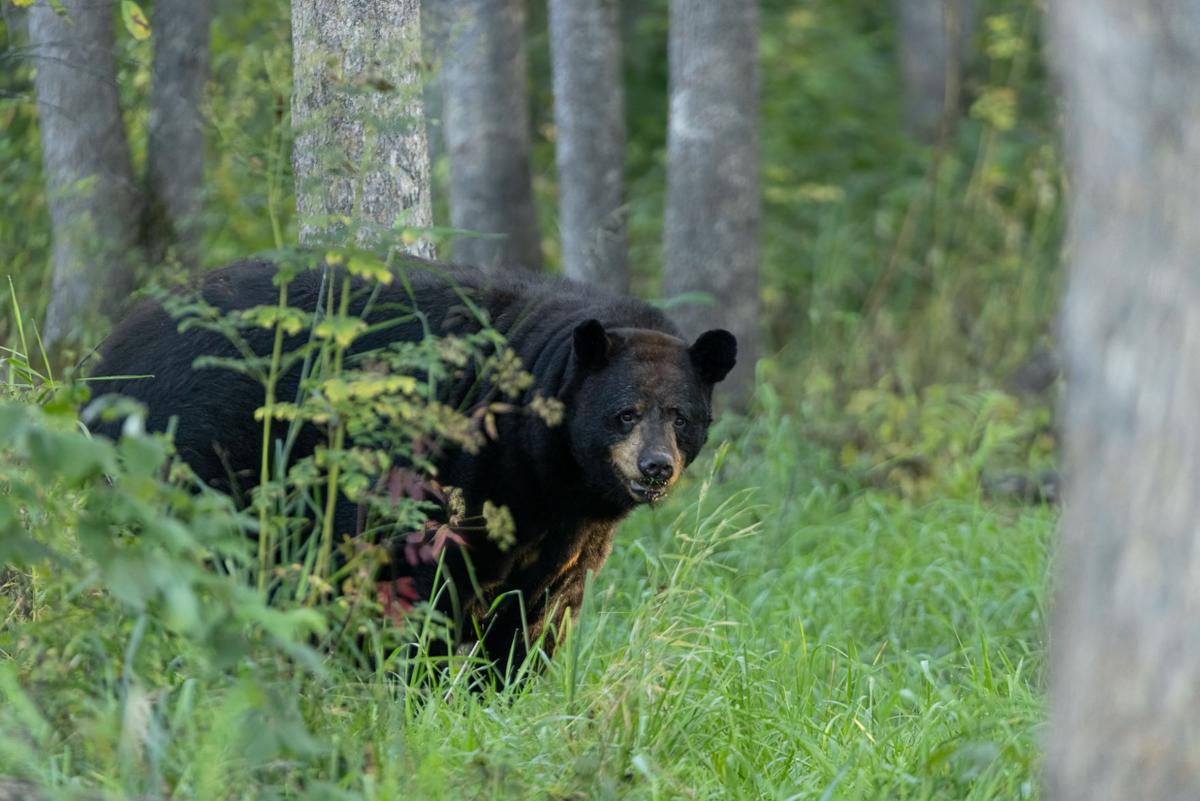 Prior to hibernation, black bears spend upwards of 20 hours per day eating and packing on the fat. Some are able to put on up to 100 pounds of fat.

Standing in a small clearing, deep in the northwoods of Minnesota, I was telling the participants in my black bear photo workshop some of the more interesting natural history facts about the American black bear.

Things like how female bears are one of the few mammals to have delayed fertilized egg implantation after mating, or how these bears can lie down in the fall and rest for six or more months, then in spring get up and walk away without any muscle atrophy.

These are just some of the things our American black bear (Ursus americanus) can do that we people really struggle to understand.

The American black bear is found only in North America and is the most widely distributed bear in North America. It can be found from Florida, up through New England and into Canada. It is also found in the west, up and down the Rocky Mountains as far south as Mexico. It also ranges across Canada and into most of Alaska. It’s estimated that 40 out of the 50 states have at least a small population of black bears.

Historically the American black bear split off from its sister species, the Asian black bear, about 5 million years ago. Believe it or not, there were two other black bear-like species in North America in the past, the short-faced bear and the Florida spectacled bear. Both went extinct during the last Ice Age, about 10,000 years ago.

We have a total of three bear species in North America. The black bear, the brown bear (often called grizzly) and the polar bear. The brown bears are broken down into several subspecies, which often leads to a lot of confusion about these bears. The most common is the coastal brown bear found in Alaska and British Columbia. Then there is the Kodiak bear, which is found on the island of Kodiak in Alaska, and the interior brown bear, which is called the grizzly. Out of all these brown bears, the grizzly is the smallest and the Kodiak is the largest.

Female black bears start to breed at 3-5 years of age. The mating season is in June and July. The female will mate with several males. The female’s eggs become fertilized right away after mating, but the eggs don’t implant in the female’s womb or start any development until several months later in November. The female’s overall health, weight, stress levels and other conditions dictate how many fertilized eggs will implant and start to grow into baby bears. The heavier and healthier the female the more eggs will implanted. This is truly remarkable reproductive behavior.

The act of hibernation is another remarkable behavior. Black bears in northern states and Canada enter hibernation in October and early November. Bears in the southern states, usually only the females with cubs or females that are pregnant go into hibernation and for a much shorter period of time.

The northern bears will hibernate anywhere from four to eight months depending upon where they are located. During hibernation, bears doesn’t eat, drink, urinate or defecate. Their heart rate drops from 50 to 60 beats per minute down to eight per minute and they only take one breath per minute. I have been inside a black bear's den in winter while it was hibernating and was amazed to see it breathing only once per minute.

Prior to entering hibernation, the bear spends upwards of 20 hours per day eating and packing on the fat. This stage is called hyperphagia. Some bears are able to put on up to 100 pounds of fat when bulking up for hibernation. Large males can put on more and smaller females put on less. Either way, a black bear's diet is about 85% herbaceous, which means they are eating mostly plants. During my photo workshop the participants are often amazed that the bears act more like cows, with their heads down biting off mouthfuls of grass.

During the photo workshop, we spend three days capturing images of black bears. This year we saw small cubs which were born this past spring, up in trees and following their mothers around as she looked for food. We saw several big adult males that weighed 600-plus pounds. These big males are impressive in their size and power.

Everyone in the workshop agreed — they had an opportunity to spend quality time with these bears, with a experiential kind of learning about the American black bear.