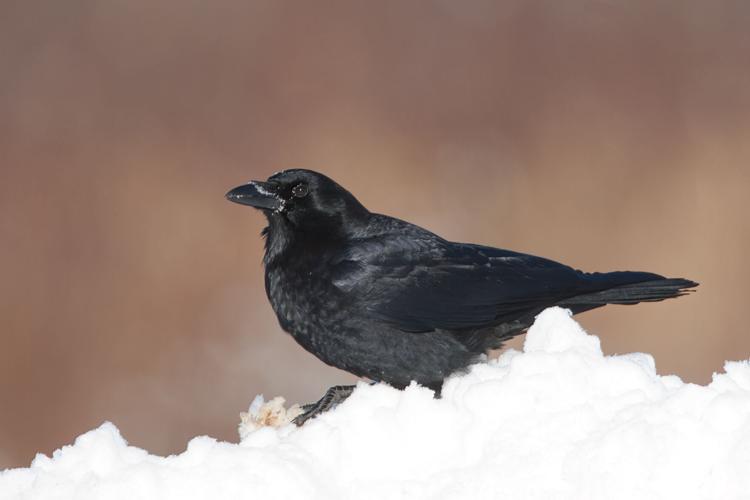 We often overlook or ignore the more common critters in the natural world. The eastern gray squirrel and chipmunk come to mind as examples of common critters that many people don’t think about.

The American Crow (Corvus brachyrhynchos) is an exceedingly common bird that I feel is often overlooked. They are found throughout the United States, most of Canada and parts of Alaska, but nowhere else. This is why its common name includes the word “American,” because it is only found in North America.

There are several other species of crow found in Europe, Asia and Africa, such as the Carrion Crow and the Hooded Crow. These crows look very similar in size, shape and color and also fill a very similar ecological niche.

For those who haven’t been to the East Coast of America, you might be surprised to learn that we have a second species of crow, the Fish Crow (Corvus ossifragus). They look nearly identical to the American Crow but are smaller and sound utterly different. They are a coastal bird from Louisiana to Florida and up the East Coast to Massachusetts.

They also shouldn’t be confused with their much larger cousin the Common Raven (Corvus corax). The Common Raven is larger and has a larger bill, more feathers on its throat and around its legs and sounds very different from the crow. Ravens also live in smaller family units and don’t roam around like crows do.

I don’t think you would get any arguments if you said that the American Crow was one of the smartest of all birds in North America. These birds are very inquisitive and have the ability to problem solve and use tools. Believe it or not, we used to think that humans were the only animals who used tools. In fact, we used the ability to use tools as a demarcation between humans and the animal kingdom, in an attempt to separate people from other animals. Well, as usual, we were wrong. Turns out many animals used tools long before people did.

Crows have done an amazing job of adapting to people and our city and suburban environments. In fact, it wasn’t that long ago that crows were considered a rural species found on farms and in fields. Now they thrive in cities and suburbs all across the country. In fact, now more crows live in cities than in the country.

American crows have the ability to communicate with each other and share information about the location of food sources. They can communicate to family members where food is located well enough that they can find it on their own, without being shown. This indicates a high level of detailed communication between individuals.

These birds are considered omnivores, which means they eat everything from insects to nuts and berries. They also eat meat, eggs and fish. They are opportunistic feeders and will take advantage of any food source they can find. They are also proficient hunters. I have witnessed crows catching bats while in flight and also small young birds. They cooperate to locate for catch food. More importantly they share what they find with the entire family.

American crows are considered socially monogamous and a cooperative breeder. This means that the young birds from the previous year stick around to help raise the young from the current year. They all work together to raise the young crows. They are the originators of the concept of “taking a village” to raise a baby.

Families are often as large as 15 to 20 individual birds. The younger birds stay around for several years before striking out on their own. They usually don’t reach breeding age until they are 2- or 3-years-old. Most young birds don’t leave their families until they are about 5 years old.

So, I was thrilled when a small family of crows started hanging out in my backyard. I enjoy watching them doing things like taking a snow bath or chasing the squirrels just for fun. I really like the common critters that we often overlook and usually ignore.