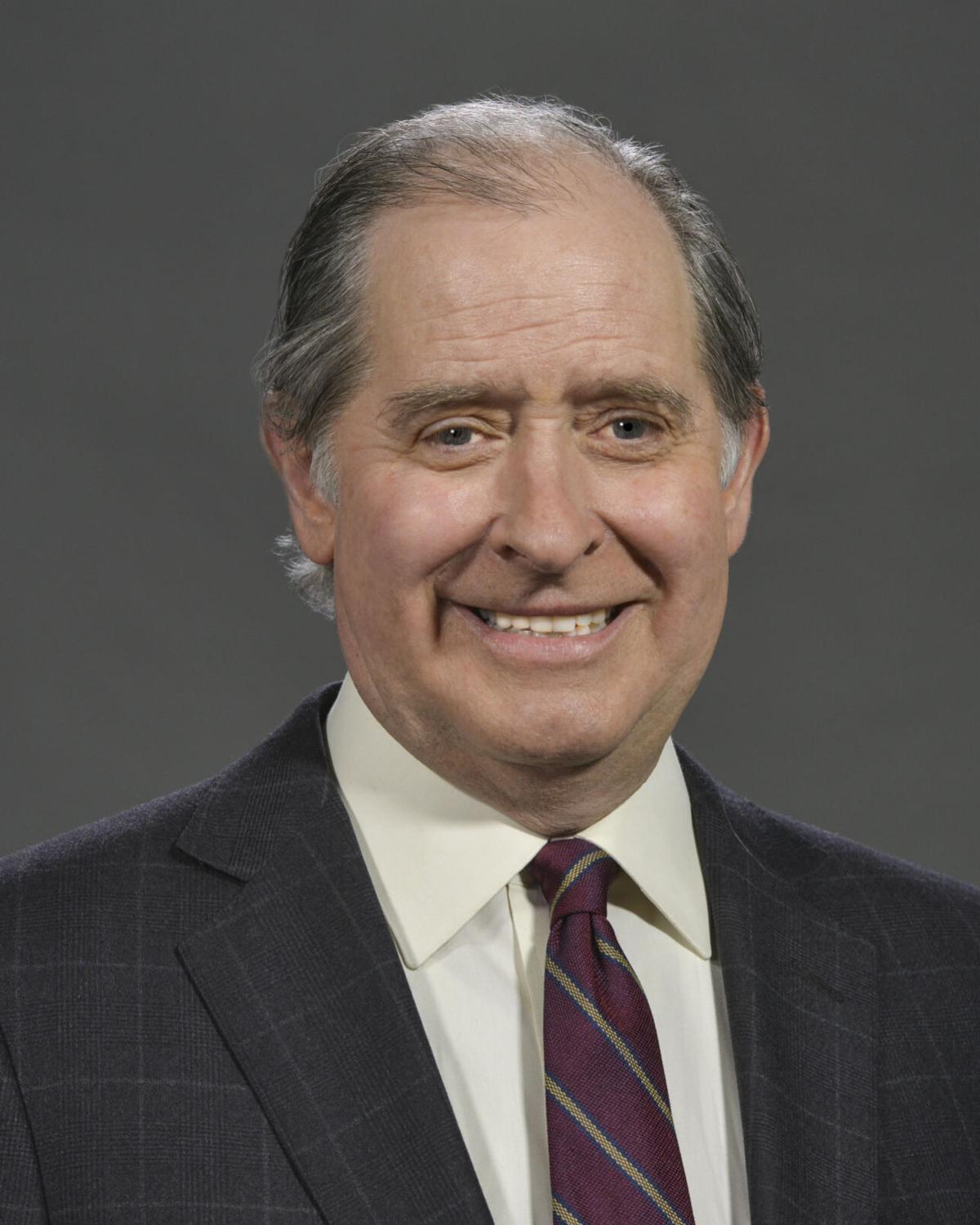 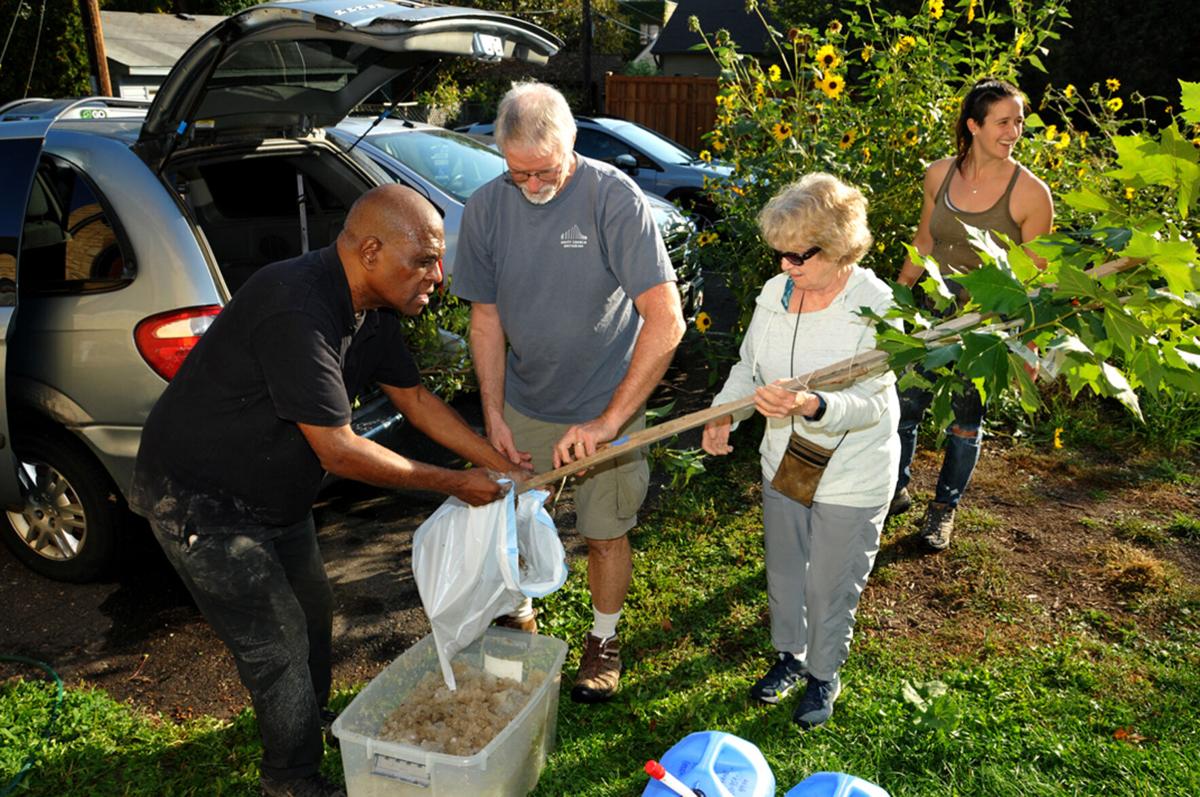 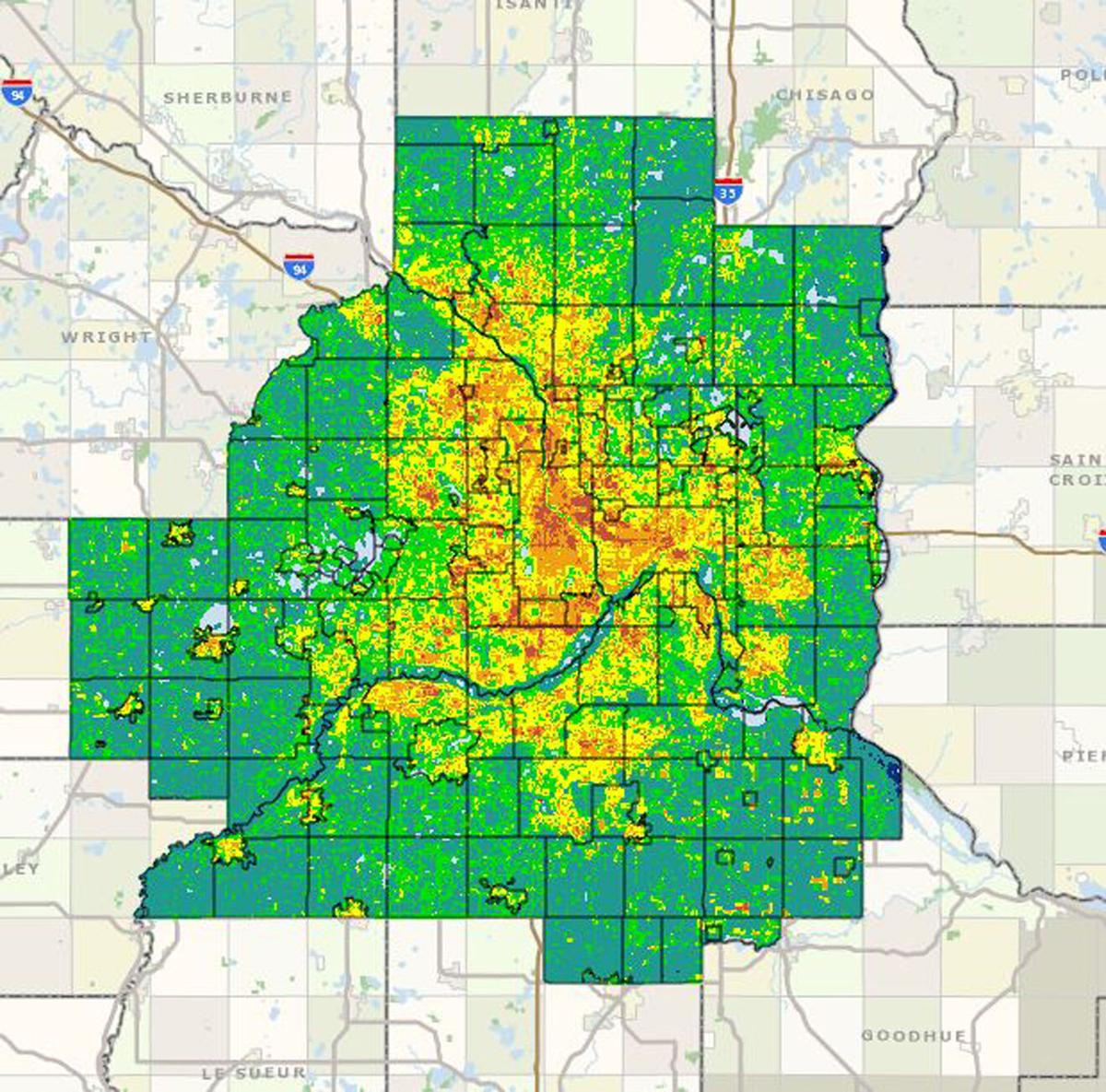 How hot is your neighborhood? The Met Council has created this heat map to show how the surface temperatures across the region are impacted by factors like development and tree canopy.

How hot is your neighborhood? The Met Council has created this heat map to show how the surface temperatures across the region are impacted by factors like development and tree canopy.

On a sunny Saturday morning last month, Rennie Gathier showed a group of volunteers how to use a special gel to keep the roots of young saplings hydrated for the trip to the Saint Paul homes where they would be planted. By the end of that weekend volunteers from Saint Paul’s Unity Unitarian Church and the neighborhood group Frogtown Green would plant over 70 new trees for residents, free of charge, in an effort to combat the effects of global warming.

It may seem like a small gesture in the face of a problem as big as a warming planet, but the simple effort of making neighborhoods shadier on a hot summer day can have a big impact.

As the metro region’s main planning agency, the Met Council has been studying how tree canopies impact the health and quality of life of people in their neighborhoods.

With a tree canopy of only 22%, Saint Paul’s Frogtown neighborhood has the least amount of coverage in the city. On a blazing summer day like we saw this year, it can be from 10 to 15 degrees hotter there than it is in nearby neighborhoods that have almost double the number of trees. In addition to being hotter, neighborhoods with fewer trees have higher incidences of respiratory illnesses like asthma because trees filter the air.

Across the Mississippi the group Green Minneapolis is working with the business community and the Minneapolis Parks Board to promote tree canopy growth and preservation. The Met Council is interested in partnering with them because they see the potential of increasing the tree canopy in the Twin Cities by as much as 40% by advocating for more public investment, better planning and building an innovative partnership with the business community to stimulate private investment in a greener region.

Tree coverage is also an equity issue. Trees don’t add to the bottom line for a landlord. It’s no coincidence that Frogtown is comprised of 64% rental housing and has the sparsest tree canopy in the Twin Cities. Additionally, low-income homeowners have less money to invest in landscaping.

A recent study reported on by National Geographic found that the Twin Cities neighborhoods that were historically redlined are hotter in the summer because of sparse tree canopies. Modern heat-mapping technology literally shows how this legacy of discriminatory housing and lending policy, dating back to the 1930s, is burned into today’s neighborhoods by the hot summer sun.

This problem is getting much worse and will impact many more people as the emerald ash borer infestation continues to take out ash trees across the state. Estimates show that Minnesota will lose as many as a billion ash trees in the next decade.

As a planning agency, the Met Council is keenly interested in addressing this challenge. We’ve been working in partnership with the Nature Conservancy and the Tree Trust. The three partners are developing an online application to help communities track where tree canopies are thin, and then prioritize where cities and communities can get the most impact from new planting.

The Growing Shade app takes data from multiple sources. Demographic information about neighborhoods, locations of businesses, schools, bus stops, parks, and other data are combined to create a complete picture of a city down to the neighborhood level. Nonprofits, cities, and communities can then take that data to target the best places to plant trees. The online tool is currently in beta testing and expected to be launched in early 2022.

This data will allow cities to look at tree canopy through a public health lens, identifying areas where respiratory illnesses like asthma are higher and trees are needed to filter particulates from the air. Data from this tool could help target areas where families with younger children are living and playing to ensure the shade from the tree canopy grows as they do.

Planting trees is the ultimate expression of long-range planning. We’re working to give cities and neighborhoods the resources they need to be more livable and healthier for future generations, knowing that our grandchildren will sit in the shade of a tree that we will only know as a sapling.