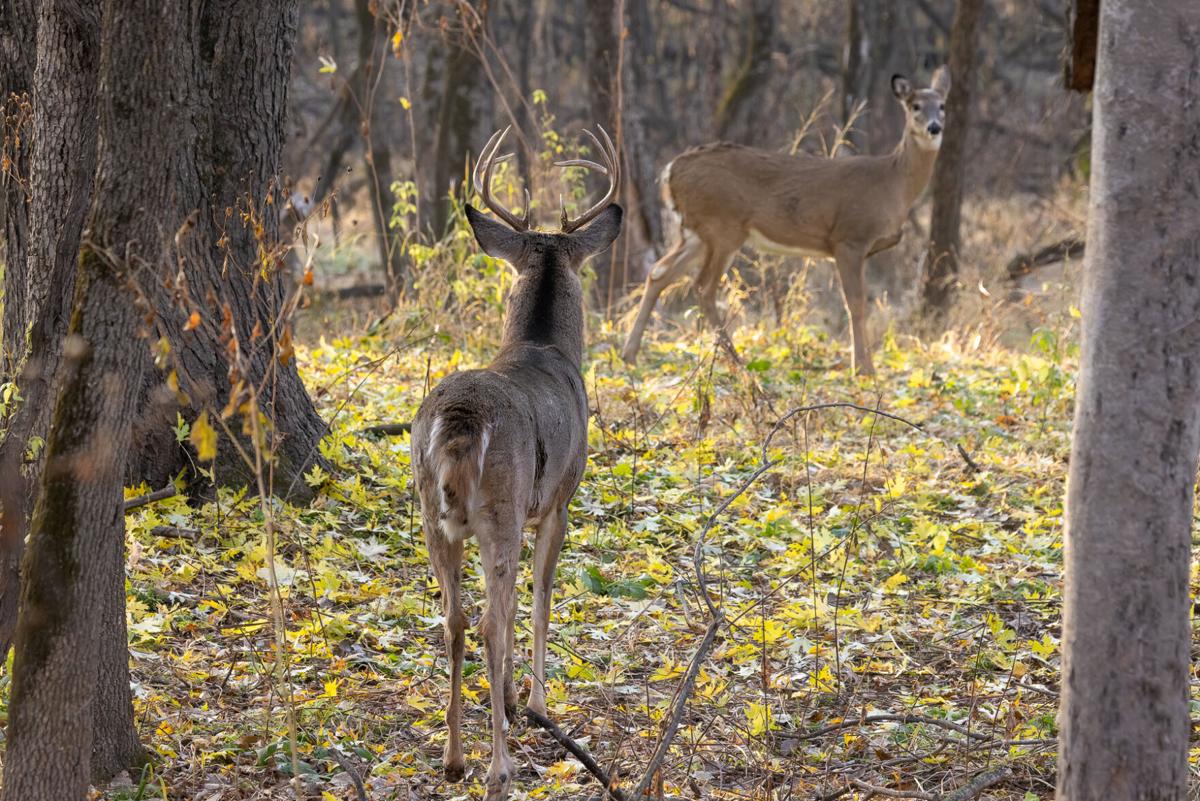 Some research shows a breeding buck loses as much as 20-25% of its body weight during the rut.

Yet another white-tailed deer (Odocoileus virginianus) mating season is behind us now. This year I spent a truckload of time in the woods following several large bucks who were actively searching for mates. I was able to capture a pile of images of the most interesting mating behavior.

The mating season, also known as the rut, for white-tailed deer lasts about three weeks in the northern states. The rut starts in mid-October and runs through mid-November. Several research studies show that the timing of the rut is influenced by the lunar (moon) phases. It seems that the rut peaks about seven days after the second full moon during October and November.

I find the word “rut” to be a funny word that is used for describing the mating season. It turns out that the word rut comes from the Latin word “rugire,” meaning “to roar.” Presumably it’s a reference to some animal species such as the elk where the male bugles or roars to proclaim possession of a harem of females.

During the rut, the male white-tailed deer experiences a huge increase in testosterone rushing through his blood stream, which boosts aggressiveness, leading to fights with other males to establish dominance or access to females. Even young bucks with tiny antlers engage in these sparring matches. In addition to fighting, the big bucks will also rub their antlers on tree trunks. This often results in stripping the bark off the young tree. They will also thrash their antlers around in a low growing shrub, often breaking off the branches.

In both deer and elk species, the males will mark themselves with mud or urine during the rut. Last month, while filming elk during the rut in Montana, several of the bull elk rolled in mud or completely submerge themselves in muddy water. It appeared to me that the most dominant males didn’t use mud coatings, but instead urinated across their own belly and down their hind legs. Either way it seems the males are going to extraordinary measures to show off for the females.

Speaking of hind legs, the inside portion of the leg at the bend of the ankle is where one of the largest scent glands is located on the white-tailed deer. It gives off a strong musky odor that you can smell if you get close to a rutting male. Every year when I am out with the deer during the rut I marvel when I get a whiff of the males rutting perfume. It’s a sweet yet pungent odor that once you smell it you will never forget it.

Female white-tailed deer are called does. While the male can be ready to mate for several weeks before the rut and several weeks after, the does are only in estrus (ready to mate) for only about 72 hours. This narrow window of time means the male needs to get his timing just right. Since each female comes into estrus on her own schedule, the male is constantly on the move traveling over great distances looking for each doe that is in estrus.

Some research shows a breeding buck loses as much as 20-25% of its body weight during the rut. So, on average a breeding buck which weighs about 180 pounds can lose about 30 to 40 pounds in just a month or two. In the post-rut the buck often spends an extraordinary amount of time eating and just laying down and recovering.

"Every year when I am out with the deer during the rut I marvel when I get a whiff of the males rutting perfume. It’s a sweet yet pungent odor that once you smell it you will never forget it."