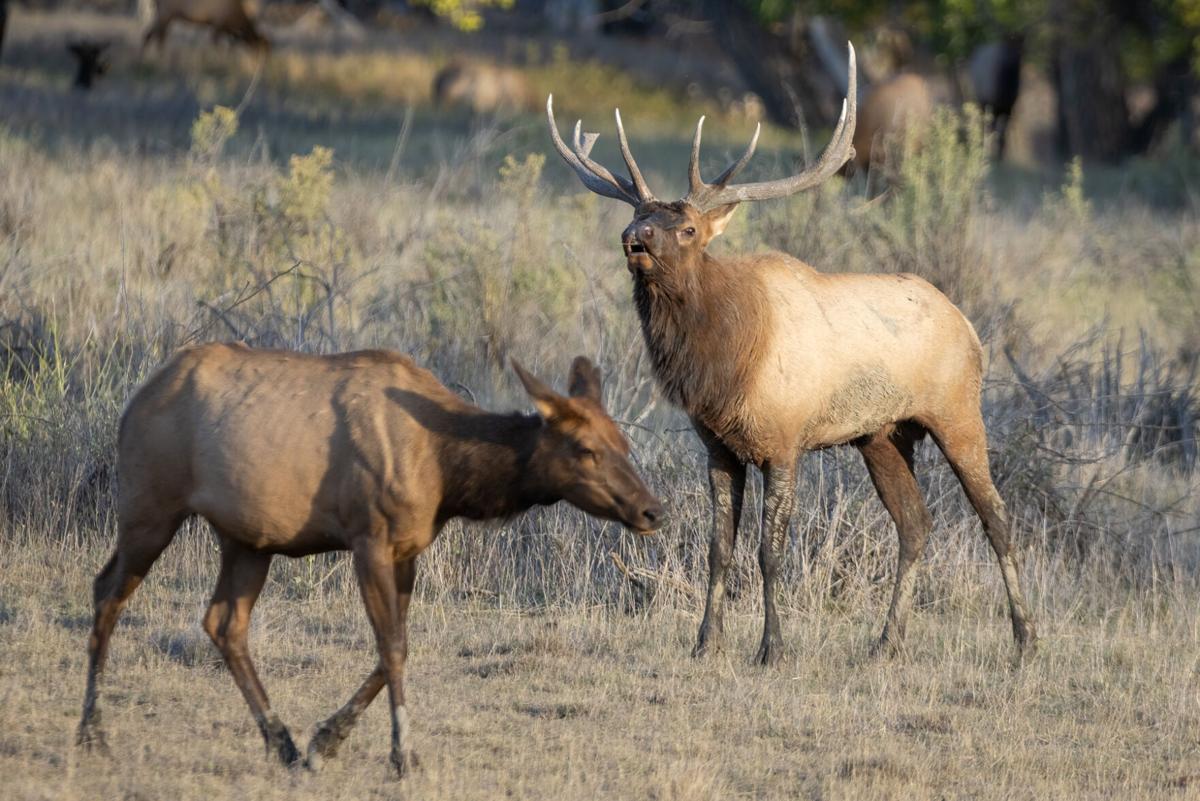 During mating season, a male elk will claim a group of cows as his own.

When it comes to confusing common names for animals, I think the American elk has got to be near the top of the confusing list. This came to light last week when I was in northern Montana to film and photograph elk. I ran into a guy from Europe who was also looking to capture images of elk, but he called them moose. I immediately understood the confusion because I have dealt with this before.

You see, in Europe they call elk (Alces canadensis), moose. To make things worse they call moose, elk. Just the opposite of how we name these animals.

In Europe, soccer is called football, but here in America we have a completely different sport called football. What Europeans call football; we call it soccer. When it comes to common names, there is no common ground.

To make things worse, many Europeans call elk, wapiti. The name wapiti comes from the Shawnee and Cree Indian word meaning “white rump.” So yep, you got that right. Europeans are using a name that comes from a Native American origin. Rarely do we use the name wapiti here in North America where we probably should. Talk about your confusing names.

For a wildlife biologist like myself, I give thanks for the genus and species names, or scientific names, which is a universal naming structure that is agreed upon by scientists around the world. It eliminates the problems with common names altogether. The American elk is called cervus canadensis and is known by this name worldwide.

The word “elk” is believed to come from the Greek "alke" — meaning "strength." This makes some sense since the American elk is one of the largest members of the deer family. Male elk are very powerful with fully grown males weighing as much as 1,000 pounds.

I was in a very remote part of Montana, about 60 to 80 miles away from any town in a narrow valley where the Missouri River cut through and created a sheltered place to allow a narrow strip of cottonwood trees to grow. The valley was about 50 miles long. Several herds of elk gathered for the annual rut, or mating season.

In the fall of the year, the adult male elk, called a bull, starts to follow herds of female elk, called cows, around. The male will claim a group of cows as his own. The group of cows is called a harem. He will spend many weeks following and herding the cows to his advantage. When a female wanders too far away from the harem, the male will run ahead of her and block her path and push her back to the harem.

This herding behavior goes on all day and all night. The bull is constantly herding his harem around. He adds to the herding behavior a high pitched and very loud bugling, which serves to announce his claim to the herd of cows. Bugling is so loud that it can be heard from a half-a-mile away.

The males will herd the females and bugle all day and all night which was painfully obvious when I was trying to sleep in my tent. I had set up camp in a small grove of willow trees, under the canopy of cottonwoods. There wasn’t any official campground, so I found a clearing and set up my tent. The elk like to eat/browse on the willow leaves so at night they would move into the willow patch and right next to my tent.

By morning, the herd moved back to the open fields to feed on the few sparse blades of grass before moving back deep into the cottonwood trees. I would get up well before dawn and hike over with all my camera gear, hoping that the big bulls would be out in the open and have enough light to capture a few images or some video. This went on for three days and nights, which allowed me several good opportunities to study and capture some great pictures and video of this amazing animal.

"There is nothing like listening to a bull elk bugle just a dozen yards away while you’re trying to sleep."