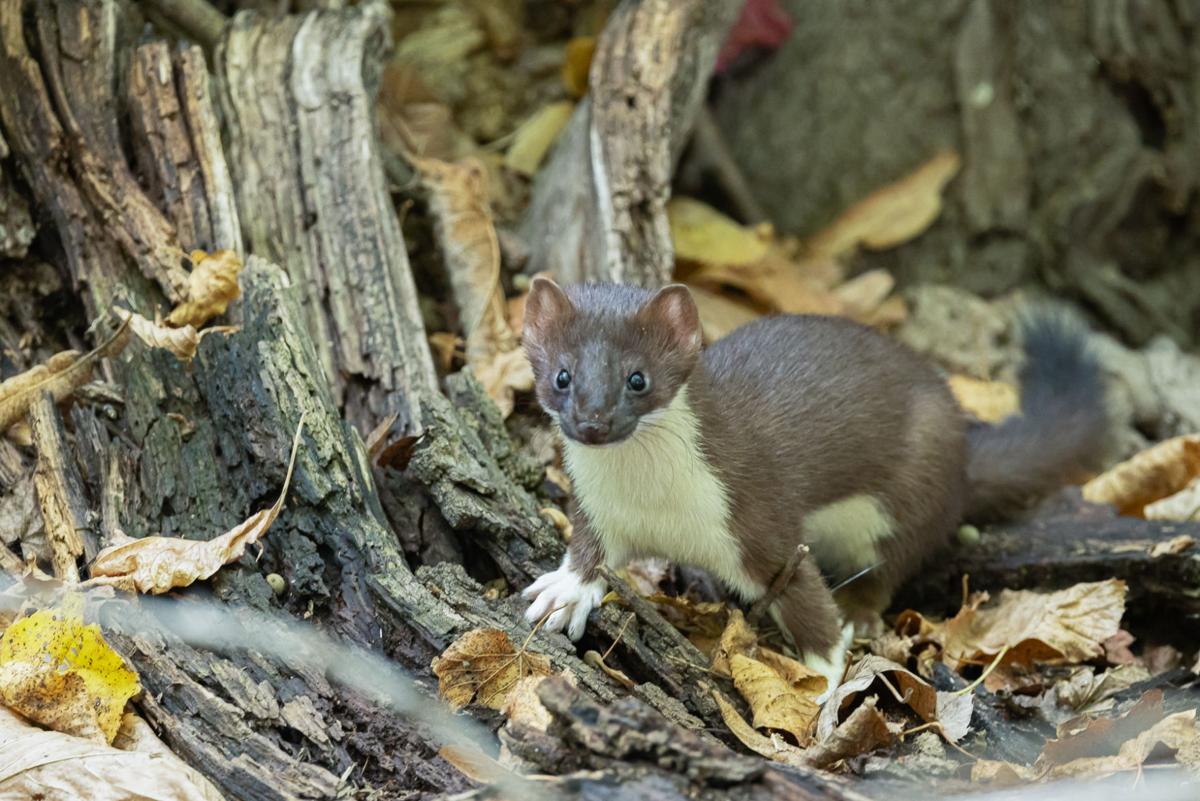 In summer, long-tailed weasels are a rich chocolatey brown color with a yellowish chest and belly.

Every now and then I get an opportunity to work with a species that I don’t have much hands-on experience with. These are often rare or endangered species or a species that is difficult to access and lives in areas that makes it hard to get close to.

Years ago, I traveled across the U.S. to photograph and report on 10 endangered species. I spent time in Florida with the endangered Indian manatee, roamed the prairies of South Dakota for the elusive black-footed ferret which was once thought to be extinct. I captured images of the magnificent California condor on the rim of the Grand Canyon — and the list goes on. It was a great assignment.

This past week I had a very rare opportunity to capture some images and spend a couple days studying the behavior of a pair of long-tailed weasels (Neogale frenata). Over my many years studying wildlife I have spent a lot of time with short-tailed weasels, the smaller cousin, but for whatever reason, I hadn’t spent any quality time with the larger long-tailed weasel.

Long-tailed weasels are a species in the mustelid family, which means they are related to badgers, ferrets, martens, mink and wolverines. All these critters have a substantial musky odor that emanates from special anal glands. Some of the mustelids use the glands for defense from predators such as the skunks while others, such as the weasels use the scent to mark territory. Using musky scent for marking territory or attracting mates for breeding is very common in many species from weasels to white-tailed deer and muskox. If you have ever been near any of these animals, you know what I mean.

Long-tails are one of the larger of the true weasels in North America. Males are larger than females. The body length of an adult male runs 12-14 inches, so they are not huge animals at all. Despite their name, their tail is only 6-8 inches long and comprises only about 40-70 percent of the body length. So, in other words, the tail is about half the total length of its body. The more familiar and smaller Short-tailed Weasel has a body length of only 7-12 inches long, but its tail is about the same length as their body. How about that for confusing information?

In summer the long-tails are a rich chocolatey brown color with a yellowish chest and belly. They have a black tipped tail. In winter they turn pure white but retain the black tip of the tail. What I find interesting is that the long-tailed weasels in the south, such as Florida, don’t turn white in winter. Only their northern counterparts do the switch-a-roo from summer brown to winter white. In addition, the long-tails in northern regions grow thick fur between their toes to cover the soles of their feet as opposed to the southern ones who don’t.

So, this means long-tailed weasels will molt twice a year. Molting is the process of shedding old fur and growing new fur. The first molt is in the autumn, around October and November, and again in spring around March and April. Each molt takes 3-4 weeks to complete. They do it gradually, so you really don’t notice the change. The one thing that remains the same is the black tip of the tail. The molting is governed by the photo period or length of daylight which causes the pituitary gland to release hormones into the body of the weasel. The hormones trigger the shedding of fur and growing of new fur.

I mentioned the long-tails in the south, such as Florida, so let’s look at their range. The long-tailed weasel is found in nearly every state in the country and up into Canada and throughout Mexico and into Central and South America. It’s a huge range so you might consider this species to be extremely widespread.

I was able to spend two days studying and photographing a pair of long-tailed weasels that had been rescued from the wild when they were newborns and now where old enough to be released back into the wild. The first day they stuck close to a large hollow tree where they were released. I spent most of the day watching and photographing their natural behaviors. I also set up a game camera to monitor their activities when I couldn’t be there, day and night.

They spent the first day just playing and getting to know their surroundings. They would return to the release spot several times during the day and into the night. The second day they were bolder and explored areas well beyond the release site and by day three they were off into the wild to make a life for their own. I continued to monitor over the next week.

"The constant swooping and swirling of the birds against the orange glow of the setting sun was breath-taking and hearing that many martins calling warmed my heart."