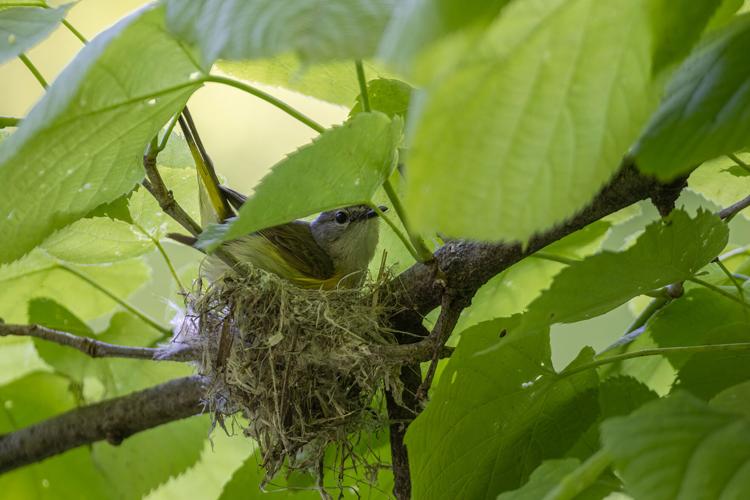 An American redstart female builds a nest in southern Minnesota.

The key to “seeing” nature is to stop and look. I know that seems rather obvious but it’s true. The simple act of stopping and looking is really all it takes to start to see more nature. This is something I learned a long time ago, but it seems that I need to stop and remember it every now and then.

Yesterday, while filming for a new nature documentary about a 500 acre-plus mixed woodland and riparian area, I stopped to check out a very small stream. It turns out the stream was more like a trickle of water, but while standing and just enjoying the sight, I noticed some movement just in front of me.

I could see immediately that the tiny, drab bird was a female American redstart (Setophaga ruticilla). The American redstart is a fairly common warbler species. Its unique name “redstart” refers to the male’s red markings on the side of the tail. The word “start” is an Old World word for tail. So red-start literally means red tail.

Although the female has the same color pattern as the male, she is yellow, not red. They nest in open woodland habitats throughout the eastern half of the country. When I say “they” nest, I mean, it is the female who builds the nest, lays the eggs and does all the incubation.

A highly migratory warbler, they spend their winters in Central and South America, returning to the eastern U.S. in late spring. It is important to understand that when these birds are down in the tropics for the winter, they are not nesting there. They spend their winter resting and feeding and getting ready for spring when they migrate thousands of miles back to the forests of eastern United States to nest.

I am hoping that right now you are having an “a-ha” moment and realizing that your backyard woodlot is the key to this bird’s survival. Your woodlot is the only place this bird nests.

I had stopped to check out a tiny stream when I spotted this female American redstart. I could identify it instantly. Not only did I identify it instantly, but I could also see what she was doing right away. She was stripping fine fibers from last year’s plant stems. This can only mean that she was gathering nesting materials. It only took watching her for another couple minutes to see where she was going and to locate the nest she was building.

I find the simple act of a tiny bird using only its beak (mouth) to gather all the materials needed to make a nest. They then use the same tiny beak to weave the materials together to construct something that is strong enough to hold the eggs while the female incubates for several weeks, and also hold the young birds after hatching. This is truly remarkable.

As I sat and filmed this remarkable little bird building its nest, I started to count the number of trips bringing in nesting material. In just one hour she came to the nest 28 times. That is about once every other minute. Hundreds if not thousands of trips are needed to complete a nest. She constructs a cup nest, which is an open top nest and is shaped just like a small tea cup.

Redstarts usually build their nests near water and usually only 5-10 feet off the forest floor. They lay anywhere from two to five eggs. Only the female incubates the eggs. The young stay with the adults for about three weeks before they are on their own.

The nest needs to be strong enough to last about two weeks of incubation and another nine to 10 days after the chicks hatch and start to fly. After the young leave the nest, they won’t return to the nest and the female won’t use it a second time. So, all of this effort is for a relatively short time of use.

I had a lot more filming to do so I needed to leave the female American redstart after just one hour, but if I hadn’t stopped to get out of the car and take a look at something else, I would have driven right by and never have seen this little beautiful bird doing a truly remarkable thing.

"The simple act of stopping and looking is really all it takes to start to see more nature."