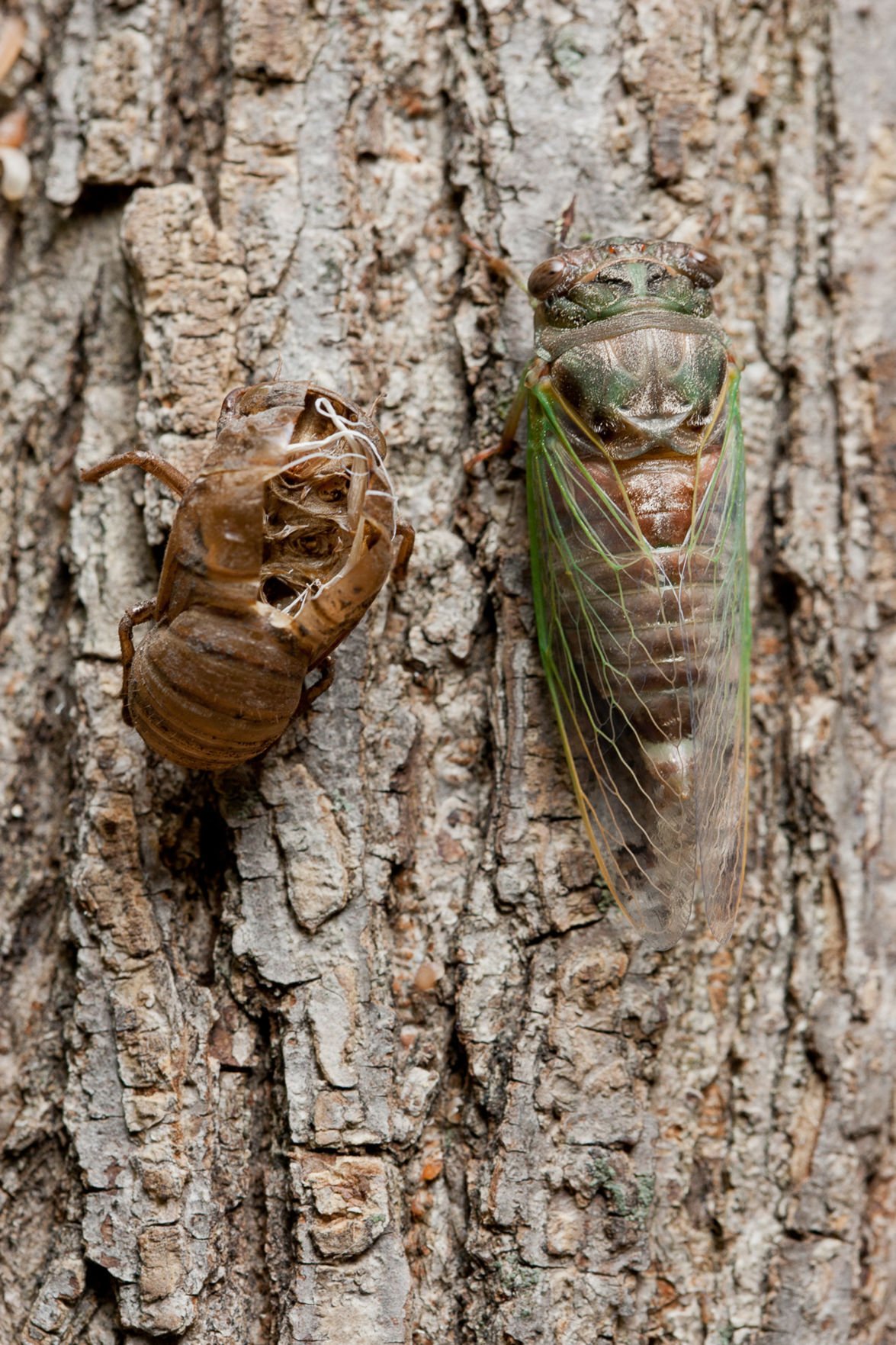 A cicada nymph, and an adult. Each species of cicada has its own unique sound.

In my last column I wrote about the cicada killer wasp. An extraordinary large wasp that kills cicadas to feed the wasp’s offspring.

I think it sparked some interest in insects in general and specifically in cicadas. So, let’s take a look at the murder victim from my last column.

Cicadas are a common summer-time insect, but most people haven't seen one. However just about everyone has heard the loud buzzing sound that cicadas make coming from the tops of trees starting in mid-summer.

Only the male makes the buzzing sound to attract the female. His call is so loud, the male needs to turn off his ear, called a tympana, so he doesn’t damage his own hearing. Some North American cicada have been recorded at levels well over 100 dB. That is loud enough to cause damage to the human ear!

There are nearly 200 different kinds or species of cicada in North America and nearly 4,000 species worldwide. At least one kind of cicada is found on every continent except for Antarctica.

Cicadas are large insects with nearly two-inch long, clear membranous wings, that carry them from treetop to treetop. While most insects such as crickets and katydids, use their wings or legs to make sounds, cicadas have a large hollow section of their abdomen that vibrates like a drum to make their specialized and extremely loud call.

Each species of cicada has its own unique sound/song which range from a loud continuous buzz to a pulsating buzz. Either way it's loud. Some species of cicada call in a frequency so high that you and I cannot hear them at all.

The male cicada produces the buzzing sound to attract prospective females for a treetop rendezvous. After the lofty encounter, the female cicada moves to another tree to find small dead twigs where she will inject her eggs into tiny slits and cracks of the dead branches.

She can lay upward of 600 eggs with a specialized needle-like appendage called an ovipositor. The eggs hatch into small bug-like nymphs in about six to ten weeks that purposefully fall to the ground and land unharmed. The nymph then burrows into the ground underneath the tree, where it begins to feed on the roots and sap of the host tree.

The nymph carries on this subterranean life for many years before emerging. The periodical cicada (Magiciada spp.) emerges only once every 13 or 17 years. They come out by the tens of thousands which usually attracts the attention of the local media because it is such an unusual sight. These are some of the longest living insects on the planet.

The more common varieties of cicada emerge every one to three years, which means we have at least one species of cicada every summer to serenade us.

No matter how long they spend underground, the newly emerged nymphs climb the nearest tree or vertical structure where they attach themselves and then split open the skin on its back and the winged adult Cicada emerges and climbs to the top of the tree to announce another summer is at hand.

Cicada are often incorrectly called locusts. The term locust is reserved to describe the times when the ordinary grasshopper becomes overpopulated and starts to cause crop damage.