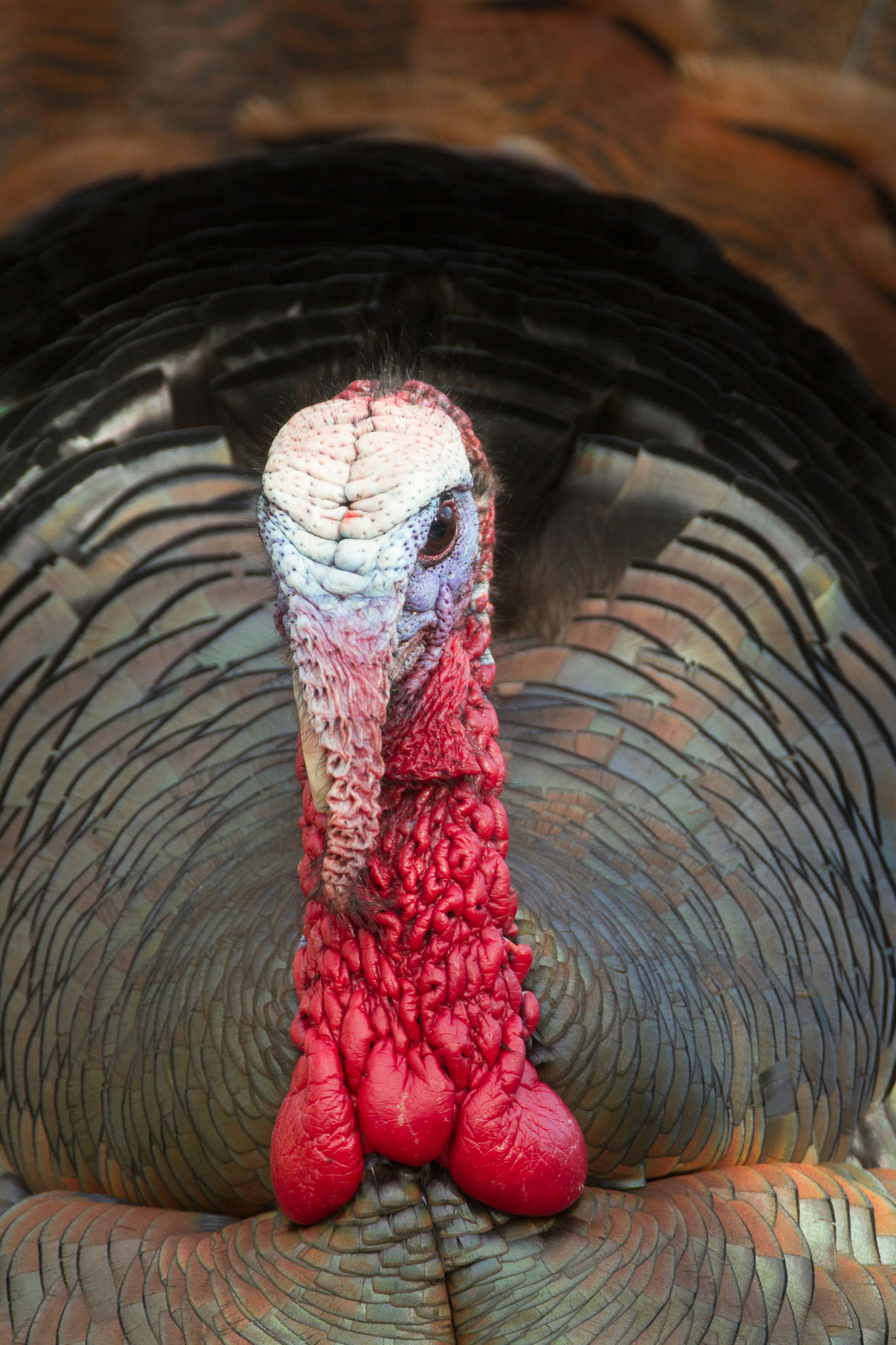 The skin on the head and upper neck of the male eastern wild turkey has the unusual ability to change color from blue to red to white.

Because of Thanksgiving, in my mind, the month of November and turkeys are linked together. Of course, this is uniquely an American association due to our Thanksgiving holiday.

So, at this time of year I like to turn my attention to the eastern wild turkey (Meleagris gallopavo). Let’s take a look.

To say our eastern wild turkey is an unusual looking bird is a complete understatement. Let’s look right past the large fan-shaped tail of the male and examine the turkey’s head. Lacking any feathers, the skin on the head and upper neck of the male turkey has the unusual ability to change color from blue to red to white. They change color based on whether they are calm or excited, or trying to impress a female or frighten by a predator. Often the color changes take only a few seconds.

In the past it was generally thought that the naked head that changes color was a function of sexual selection. In other words, females would choose the males with the brightest or most colorful heads. However, recent studies now suggest that the naked head plays an important role in thermoregulation. Thermal conductance is greatly enhanced when the head of the bird lacks feathers. This makes a lot of sense in areas where overheating or hyperthermia is concerned, but does not sit so well for the turkeys in northern regions, when hypothermia is a concern. Many agree that a bald head in the frozen northland might be a hindrance.

In addition to the head-changing color, a male’s head has many fleshy bumps or protuberances called caruncles. The snood is just one of the caruncles, but is one of the more obvious, hanging or drooping over the birds’ bill. It is believed that the larger the snood, the more dominant the male.

When the male is strutting, the snood engorges with blood and elongates and changes color. Just under the bill is the wattle or dewlap. This is more of a large flap of skin that adds to the males’ display. Just below the wattle are several large bumps called the major caruncle. All the caruncles change color when the male is displaying.

The eastern wild turkey is unique to the Americas and is our largest game bird. Because it’s such a large bird and an easy source for food, it was nearly eliminated from many parts of the country by over hunting early on in our history. By the 1930s this bird was close to extinction.

But thankfully major efforts were made to reintroduce the turkey across the U.S., starting in the early 1960s with limited success. It wasn’t until the 1980s did populations take hold and populations start to grow. There were an estimated 30,000 turkeys in the early 1900s scattered throughout the U.S.

Now there are an estimated seven million birds and growing. In fact, turkeys are now inhabiting areas thought not possible for these wonderful birds in the past. It just goes to show you that given a chance, Mother Nature can do some amazing things.

An adult turkey has between 5,000 and 6,000 feathers covering its body. While they appear over-all brown, upon closer inspection, individual feathers have a metallic iridescence, showing varying amounts of green, copper, bronze and gold, depending upon the intensity of the sunlight.

Sometimes it may be difficult to distinguish males from females. The males are noticeably larger and have a sharp spur on the back of their legs. Although the spurs may be hard to see from a distance, they are sharp and up to two inches long and curve downward. They use the spurs while fighting with other males during breeding season.

The males also have a beard, which is a collection of long thin feathers (filaments) resembling hair, clustered in the center of the breast and hang down like a beard. An adult male can have a beard up to a foot long, but most are only 9 or 10 inches. Interestingly about 10-20% of hens also have a beard.

At this time of year, you see turkeys in segregated groups. Young males in one group, adult males in another. Females, young and old, stick together, along with the young from this past spring. The groups hang together until the breeding season in spring when they will break up for nesting.

The eastern wild turkey is uniquely an American bird and it’s fitting that they at the center of our yearly tradition of giving thanks for this great nation of ours.